French 75: This Bistro Is No Beauty

The Caesar salad at French 75 is prepared tableside. Danielle Lirette
I held out hope until the very end. But the profiteroles, delivered to the blaring guitar of the White Stripes’ “Seven Nation Army,” offered no redemption.

They’d looked so promising: pale golden puffs heaped with vanilla ice cream and zigzagged with chocolate. But pastry that should’ve been light and airy yet sturdy enough to hold ice cream had the texture of stale baguette. I jabbed. I stabbed. I did my best to carry on a conversation while trying to carve off a mouth-sized bite, but the fork wouldn’t make a dent. Ultimately, I gave up and treated the profiteroles like mini ice cream sundaes, with puffs as bowls. And I accepted the sad reality: The lackluster courses that had preceded this dessert were not a deviation from the norm. They were, in fact, the norm for French 75, and a disappointment from a restaurateur who has shown us so much better.

When it opened this summer, French 75 became the tenth restaurant in the local empire created by Frank Bonanno, a repeat James Beard Outstanding Restaurateur semi-finalist who opened his flagship, Mizuna, in 2001, and plans to add fifteen more concepts at Milk Market, coming to the Dairy Block next year. Many of Bonanno’s spots have been hits from the start, and French 75 garnered a following in its first few months, as business types who work upstairs or nearby were drawn to its stylish bar, the energy of its open line, the old-school pomp of a restaurant that tosses Caesar salads tableside and lists menu items in French (“les accompagnements,” “fruits de mer,” etc.). Even in today’s highly casual era, French cuisine has cachet, and the dining room often boasts tables filled with people doing business in any number of languages. 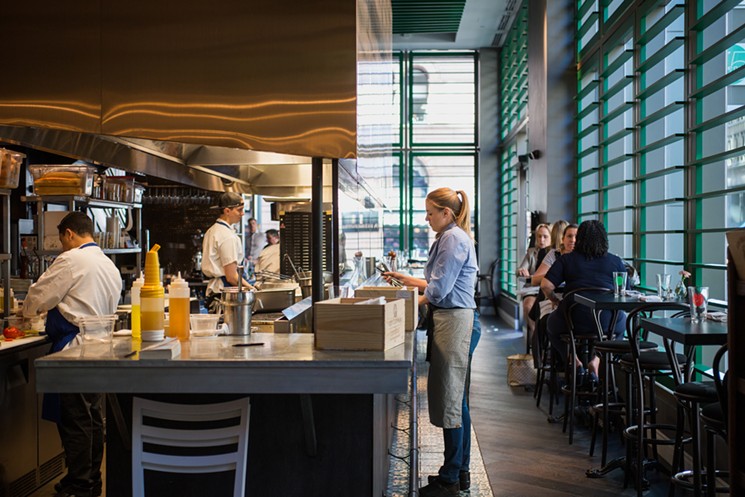 Inside French 75.
Danielle Lirette
But in any language, it’s an insult to call French 75 the “little brother” of Mizuna, as Bonanno often does. A meal at French 75 bears no relation to one at Mizuna. Nor will it seem familiar to any diner who’s been to France or even New York’s Balthazar, or is old enough to remember the level of service and cuisine that French 75 is trying to emulate. And it’s certain to confound younger diners, who may end up thinking that this is what French food is all about.

It’s not. Canned escargot, chewy as gum, aren’t why people fall in love with something as off-putting as snails. Polished touches — tiny fork, white plate with indentions for each creature — can’t undo the unwelcome smother of melted cheese, the over-garlicky butter, the rubbery chew. And where were the shells? We eat with our eyes: Even oysters, which everyone loves to love, would lose their visceral appeal without their gnarled, pearlescent shells. My friend, who’d never had escargot but was excited to try the dish, was visibly let down by the naked, unappetizing gray blobs. Bonanno’s no-shell decision is particularly curious in a restaurant with such old-school touches as tufted, tall-back booths and tableside preparations. “They’re a pain and expensive, and you can’t reuse the shells,” he later explained over the phone, adding that he’d tried serving escargot in their shells for a brief period more than a decade ago at Mizuna, but “it was too much work for people.” Still, our dining scene has matured; guests are different now. If French 75 can serve a $26 torchon of foie gras, couldn’t it at least give shells a shot?

Sole meunière epitomizes the classic French fare that Bonanno set out to serve. Julia Child ate the dish as part of her first meal in France and found it life-changing, writing in her memoir that it was “the most exciting meal of my life.” But at French 75, sole meunière wasn’t part of the most exciting meal of my life. It wasn’t even the most exciting part of my main course, and it was my main course. (That honor fell to the capers.) The fillets were haphazardly coated in flour, some spots entirely bare, and inexplicably tasted like oil that had been used one too many times to fry things. Not even the brown butter could act as balm, since the butter was too pale to be nutty.

The disappointing profiteroles.
Danielle Lirette
In hindsight, I should’ve asked for the check long before we got to dessert rather than hold out false hope. Instead of being tough like the profiterole puffs, the puff pastry hugging the Brie en croute — a cliché of yesterday’s dinner parties, still tired after all these decades — was on the edge of undercooked, and the vinegar-heavy raisin jam was as puckery as pickling liquid. The breast in my canard entree had been cooked inattentively, rushed when the fat was being rendered and then ignored; the duck set before me had a hefty fat cap and was a dry medium, errors the kitchen should’ve seen — and corrected — since it was pre-sliced. A confit duck leg on the same plate had beautifully crisped skin, the kind you wish would come bagged like pork rinds so that you could snack on it at will. But the confit’s lovely richness was hard to savor; someone had over-curried the lentils on the bottom of the plate, until everything tasted of curry and little else.

Shortcuts were also taken with the tarte tatin, a mound of barely crisp puff pastry with entirely uncaramelized apples. The classic upside-down tart — traditionally made with apples tucked in caramel, snuggled under dough, baked and flipped to serve — is one of my favorite desserts, but given the choice between this tarte tatin and an apple pie from a fast-food joint, I would have gladly taken the latter.

The food isn’t the only fail at French 75. Three months in, the tables are already so scuffed they look greasy. The bathrooms are down so many empty corridors, you get the creeps finding your way alone at night. Servers might tell you that the dessert menu is a postcard they’ll mail for you, but that’s if they even remember to bring the dessert menu in the first place. We had to flag ours down — and not for the first time. Be careful, or your meter might run out while you wait, as ours did. 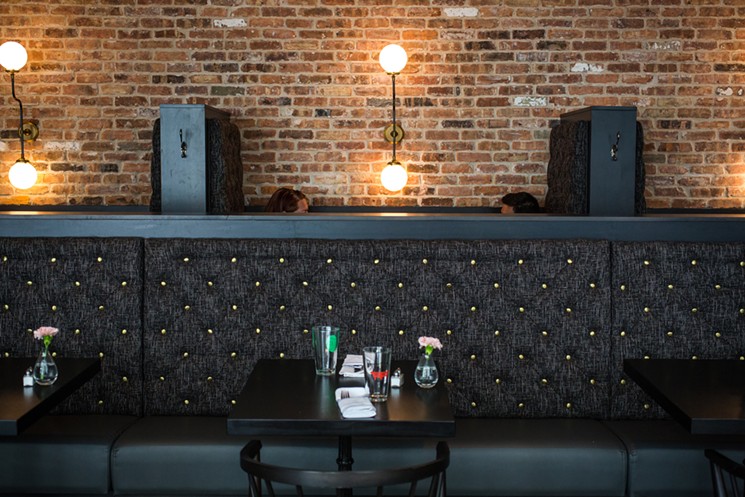 Danielle Lirette
And what is French dip doing at a French bistro? Invented a century ago in Los Angeles, the sandwich is enjoying a resurgent fifteen minutes of fame, with highly crafted versions on menus nationwide. Like my profiteroles, it looked promising at first, the meat generously spilling out on all sides. But the meat that Bonanno wants to be medium rare was far more brown than pink, the roll was cold, the mayo a rushed swipe, and the jus lukewarm.

Still, there were some signs that the kitchen, overseen by executive chef Jacob Copeland, who will soon be adding his own touches to Bonanno’s opening menu, might yet find its groove. Goat cheese took creamed spinach to a new level. Salad Lyonnaise was alluring, with sliced potatoes, a poached egg and vinaigrette with extra oomph from rendered bacon fat. Beurre fondue, a silky lemon-tarragon butter sauce, upped the ante for rotisserie chicken rubbed with butter and herbes de Provence.

But what does it say about French 75 that the standout dish was the Caesar salad, a recipe that’s not even French? “It’s from Tijuana,” a server proudly told us one night as she poured lemon juice, mustard, anchovies, extra-virgin olive oil and egg yolks into a wooden bowl and whisked furiously. (The salad’s heritage accounts for the restaurant’s substitution of cotija for parmesan.) Some may find the tableside preparation gimmicky, but cooking is hard work. When seen up close, even a simple task like emulsifying a dressing can be impressive.
Too bad the same can’t be said for the rest of French 75.