GABF is always a good time. Danielle Lirette
Tickets for the Great American Beer Festival go on sale this week, and as usual they likely will sell out within minutes — if not seconds. The price this year has stayed the same as last year, at $85 per session, but the country's biggest beer bash will be much earlier, from September 20-22, rather than the more typical early- to mid-October time frame. But that's not the only thing that has changed.

But first, here's what you need to know about buying tickets. Sales begin on the AXS website beginning at 10 a.m. on Tuesday, July 31, but only for members of the Brewers Association and the American Homebrewers Association. Ticket sales for the general public begin at 10 a.m. on Wednesday, August 1. There will be a total of four sessions: one each night on Thursday, Friday and Saturday, and a fourth session, for BA and AHA members only, on Saturday afternoon. 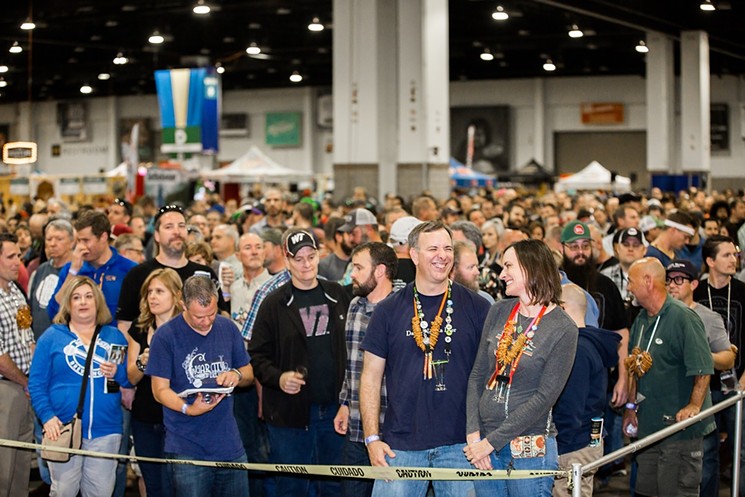 Danielle Lirette
New Ticket Vendor
In November 2014, the City of Denver passed a rule establishing the AXS ticketing company as the exclusive ticketing provider for city venues, including Red Rocks, the DCPA and the Colorado Convention Center. Existing contracts had to be honored, however, which meant that GABF worked with Ticketmaster through last year. Now the job of handling the onslaught of demand will go to AXS.  Hopefully that company can handle the crush better than Ticketmaster did in 2013, when there was a bit of a kerfuffle. How will this affect you? You'll need to set up an AXS account in advance if you don't already have one.

Much More Space
GABF has added 100,000 square feet of space at the Colorado Convention Center, bringing the total to about 584,000 square feet in all six halls. That's a lot of room, and festival organizers at the Brewers Association say it will give attendees more room to stretch out or sit down. There will also be an expanded Meet the Brewer area (see below), more games and activities, and other special areas. Oh, and for the first time since 2015, GABF will sell more tickets, but only 2,000 more. So the total number for the four sessions will increase from 60,000 to 62,000. The previous increase three years ago was from 49,000 to 60,000.

Danielle Lirette
Much Earlier
The fest is a whopping three weeks earlier than it has been for the past few years. That's good for some reasons (the weather will likely be better) and bad for others (it conflicts with Denver's Oktoberfest and Colorado Rockies baseball). But it has definitely snuck up on us. Convention planning is a delicate game, so these dates were likely selected years ago, but organizers say it will return to early October in 2019.

Breweries Arranged in Alphabetical Order
For the first time in a long time, the breweries will be arranged in alphabetical order rather than by region, which is how the hall has been laid out for more than a decade. This is a welcome change, since the geographical layout didn't have much rhyme or reason to it and made it difficult to find breweries. And organizers have added this pro tip: Breweries with “the” in their name will be listed under the first word following “the.” So, The Bruery will be under B and The Post will be under P. 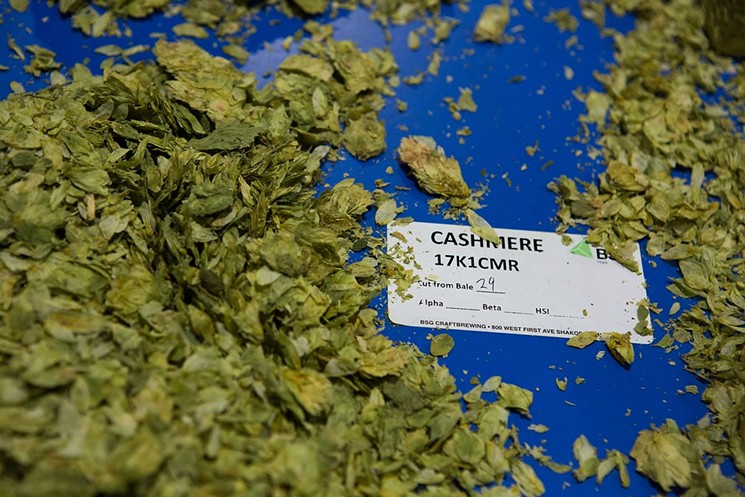 No Fresh Hops Category
Sadly, the earlier date means that much of the hop harvest won't be completed before the judging. So, the fresh hops beers will still be in production or may not even be started yet. As a result, GABF organizers decided to do away with the category for 2018 and bring it back in the future.

NE IPAs (and others)
Praise be! After two tortuous years, the BA finally decided earlier this year to add three new style categories for what has become one of the most sought-after, most controversial beer styles in the country: New England-style IPAs. That decision is likely to be a game changer and could usurp the crown from American IPAs as the most heated category. The three new categories are Juicy or Hazy Pale Ale, Juicy or Hazy IPA and Juicy or Hazy Double IPA. The organization didn't use the "New England" moniker, as it typically steers clear of geographical designations. The juice is finally loose.

Collaboration Competition and Booth
To get in on the act and to celebrate "the collaborative spirit of the craft brewing community," the organizers of the Great American Beer Festival have added a new competition this year dedicated to collaboration beers. Since these entries don't adhere to any particular style, however, they will be judged in a best-of-show format in which each beer will be evaluated on its own merits, similar to GABF's Pro-Am home-brewing competition. "Up to 48 collaboration beers will be evaluated in a Best of Show format," the BA says. "Many of the competition entries will be served during GABF at the Collaboration Competition Booth. Don’t miss this chance to sample these very unique and limited-edition beers."

New Sponsor-Driven Beer Garden and Hangout Area
The BA signed on two new sponsors this year, and each one has a special area at GABF. The first is a 12,600-square-foot “beer garden” that will pour limited-edition barrel-aged beers from seventeen breweries that have been a part of Jameson Irish Whiskey’s Caskmates program. The program was an exchange in which brewers visited the distillery, located in County Cork, Ireland, and then aged their own beer in used Jameson barrels. Some of the breweries include Black Abbey, Captain Lawrence, Cigar City, DC Brau and Denver’s own Great Divide. The second special area is a 3,600-square-foot Buffalo Wild Wings Sports Bar, where attendees can "kick back, relax and enjoy independent craft beer and wings while cheering on their favorite teams on ten TVs," the BA says. The Bdubz chain has never really been known for its extensive craft selection, so maybe this will herald some sort of change on its part.

Larger Meet the Brewer Area
In 2015, GABF added space and introduced a new area called Meet the Brewer, where the 100 or so breweries that chose to participate were given larger tables and booths and more freedom. In exchange, they were asked to keep their booths staffed the entire time by brewery employees so that attendees could chat and learn about the beer. The new hall was a terrific success, so this time around, GABF has expanded it by 40 percent to 165 breweries — and moved it to a different location.
KEEP WESTWORD FREE... Since we started Westword, it has been defined as the free, independent voice of Denver, and we'd like to keep it that way. With local media under siege, it's more important than ever for us to rally support behind funding our local journalism. You can help by participating in our "I Support" program, allowing us to keep offering readers access to our incisive coverage of local news, food and culture with no paywalls.
Make a one-time donation today for as little as $1.