How Many Breweries Does Denver Have? And Does It Really Matter? Woods Boss Brewing is the most recent to open a taproom in Denver. Jonathan Shikes
How many breweries does Denver have? People ask me that question all the time, and I don't have a good answer. Why? Because it's complicated.

Some breweries have two locations where they brew and serve beer, while others have two locations, but only one with a taproom that's open to the public. Some make beer in Denver, but at someone else’s brewery, while still more call themselves Denver breweries, but they're technically located outside the city limits. The City of Denver defers to the state on the matter, and the state doesn’t take a hardline approach on addresses as long as the brewery is in compliance with its rules and regulations.

Here are a few of the specific ambiguities. Both Renegade and TRVE Brewing have two brew houses in two locations, but each company has only one location open to the public. Should these be considered one brewery or two? Denver Beer Co. and Blue Moon, meanwhile, have two Denver breweries, each with a taproom. But maybe a single brewing company should only be counted once, no matter how many locations each one has.

Comrade Brewing, Copper Kettle Brewing, Creede Brewing, Bruz Beers and River North Brewery are all technically located outside of the city limits, meaning that their permits and occupancy had to be granted by a different government agency. But the Colorado Department of Revenue, which licenses breweries, lists all five with Denver addresses. So who gets to claim them — the city or a nearby county?

Then there are the gypsy breweries. The Larimer, 14er Brewing, Good River Beer, Dive Bar Beer, Rustica Brewing and Burgundian Brewing all have beer-making licenses in Denver, but they don’t have taprooms and they actually brew their beer on someone else’s equipment and at someone else’s brewery. A few of these are planning to open taprooms in Denver, but those locations are still under construction. Do we count them? Renegade
And finally, Sleeping Giant Brewing contract-brews beers from two dozen different companies, but doesn’t make any of its own beers or operate a taproom. Does that make it a brewery?

Does any of this matter? Probably not that much. Then again, numbers do show up in studies and in magazine articles — lots and lots of magazine articles about the highest density of breweries and city-versus-city beer stats. So maybe it matters from a pride standpoint? If that's the case, then we need a number, and since I can't get one from any of the higher authorities, I'm going to make my own decisions on what counts and what doesn't.

But that doesn't seem fair. So, let's add in the six gypsy breweries with Denver addresses and state licenses, and we’re up to 61 total breweries. Now let's also add in the five that have Denver addresses but are monitored by a different government. They didn't choose the borders that make up these no-man's-land zones. Now we're at 66.

Want to get dicey? Add the second locations for Denver Beer Co., Great Divide and Blue Moon, and we're at 69. (Although Great Divide only brews beer at one location, it has licenses at both, and since they truck their beer to the second one for packaging, I am counting the second location, as well). Then bring in the manufacturing-only, non-taproom locations — each of which has a separate state license — for Sleeping Giant, TRVE and Renegade. After all, they're brewing beer, even if we can't watch. That brings us to 72.

Seventy-two! That's a lot of breweries, and I think it's the fairest way of accounting for Denver's beer power. There's a very good chance that I'm missing something or that I made a mistake in how I'm counting. In addition, this list will change within weeks when the next Denver brewery opens. But for now, I'm sticking with it. Oh, and if 72 isn't enough for you, then you should know that an additional twelve breweries are in the works.

And finally, if you don't believe me, scroll down to see my final list. Cheers. 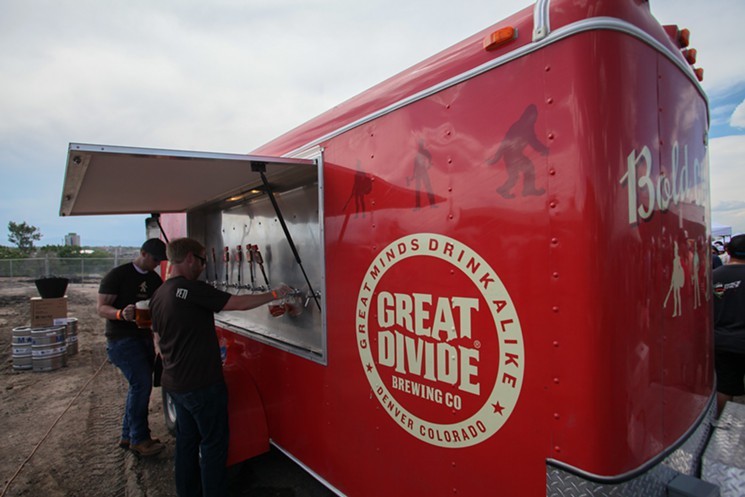