Morning Collective Is a Real People-Pleaser

Morning Collective wants to stuff your pancakes. Danielle Lirette
Big Data has invaded the restaurant industry, as owners analyze every possible metric to boost profit margins. So it’s only a matter of time before someone starts poking around in a softer science, designing a Myers-Briggs test for eateries that will determine that your favorite burger joint is an ENFP like you (go figure), and that the small-plates place that gets its green garlic from a farmer whose fields have been checked out by the chef is an ISTJ. A restaurant that isn’t doing so well may discover that its personality is a mismatch with the neighborhood, prompting a targeted redesign of the out-of-place element.

If such a test were administered to Morning Collective, the result would have “people pleaser” written all over it. The restaurant, which opened this past spring at 2160 South Broadway, feels good the moment you walk in, with plenty of booths, natural light spilling through the windows and yellow floral wallpaper straight out of the ’50s. An L-shaped bar is a comfortable spot to settle into if you come by yourself; a large oval table, just right for socializing, is great for a group. 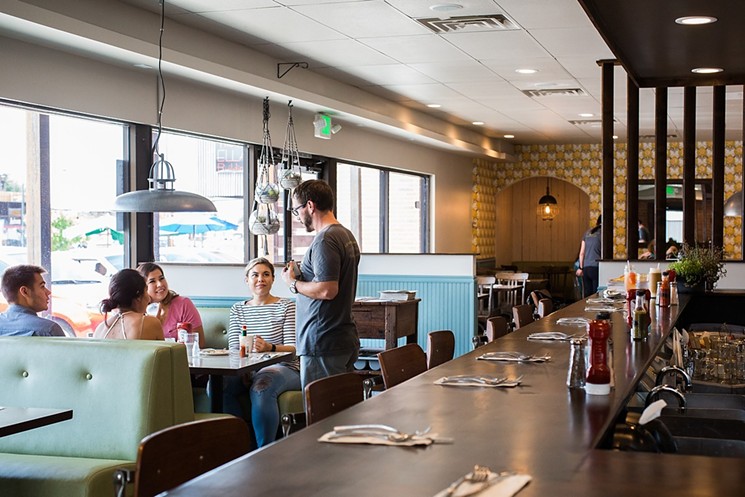 Morning Collective is ready to serve you...almost anything.
Danielle Lirette
The restaurant’s real charm, though, springs not from its homey decor, but from chef/owner Joseph Strelnik. “I grew up simply,” says the forty-year-old Pennsylvania native. “I wanted to see my parents in my dining rooms, and that took me to breakfast.” Still, it was a sharp turn for this culinary-school grad, who worked for two years in Europe and ran the fine-dining division at Pride of Aloha Norwegian Cruise Line before landing in the world of smiley-face pancakes, with gigs as culinary director of Snooze and director of the culinary/family dining division at Village Inn prior to opening his own place.

Strelnik comes across as a pleasant guy who goes through life saying yes, and he thinks his restaurant should do the same. Want organic greens instead of potatoes with your eggs, no charge? Morning Collective will do that. Want gluten-free pancakes with vegan chorizo? Morning Collective will do that, too. Can’t decide between French toast and eggs Benedict? You can order both for the price of one entree, since you can mix and match by the piece. “I wanted to build something for everybody,” Strelnik explains.

The Hearty Bowl at Morning Collective.
Danielle Lirette
And that something includes stuffed pancakes, which are part Danish and part candy bar — not because they’re actually sprinkled with chopped Heath bars or have shiny jelly centers, but because their sugar content triggers an instant high. On the outside, they look like regular pancakes — smooth, golden and not particularly thick. But their molten centers hold sauces — chocolate, caramel, marshmallow, you name it — that will soon flow like lava, pooling around the edge of your plate. Chocoholics will appreciate the banana hazelnut version, with a Nutella pocket and bananas and hazelnuts on top, and the s’mores, with a gooey chocolate core, marshmallow and chocolate sauces, and crushed graham crackers. Round out all that chocolate with the pistachio tres leches, with a cream-cheese center and topping of caramel, fresh berries and green crumbles that taste like pistachios and crunch like granola. These are all available as French toast, too, with two eggy, griddled slices sandwiched around what would be the pancake’s filling. But just because you have a choice doesn’t mean you should take it: The French toast is dry from the inside out, and no amount of sauce can make up for small rounds of brioche that could pass for slices of barely soaked baguette. Then again, the French toast is more filling than the pancakes I tried, which were just four inches in diameter, half the expected size. On my first visit, a friend wound up ordering more midstream, just to fill up. I was sorry the server hadn’t delivered a spiel so familiar at small-plates restaurants, giving advice on portion sizes and how many items it takes to build a meal.

But when he started Morning Collective, Strelnik focused more on sugar than size. That’s because he has a sweet tooth, and breakfast is the one place “where it’s acceptable to have dessert as your meal,” he notes. He also appears to have a strong inner kid. Inspired by the Kool-Aid ice cubes he had growing up, Strelnik turns housemade horchata into ice cubes for a hard iced latte. A similar trick puts bacon ice in the King’s Boozy Dilemma, along with iced coffee, whiskey, peanut butter cream and banana froth. Whether these cubes add much is debatable, since you finish the drinks long before the ice has a chance to melt, but the concept is what counts. This is a kitchen that goes the extra mile, that believes in fun, that says yes to your every whim. (Creams and froths can be added to any drink for fifty cents.)

The hazelnut stuffed pancakes.
Danielle Lirette
I suspect that inner kid is also behind the menu’s explosion of tater tots. Mixed with ham and Cheddar, tots are pressed into discs as a base for the Three Lil Pigs Benedict, with coffee-braised pork belly and bacon Hollandaise. They’re piled high in a so-called Hearty Bowl that’s unappetizingly earth-toned but certainly hearty, with chorizo, pork green chile and eggs. And along with pinto beans and scrambled eggs, they’re stuffed inside a smothered breakfast burrito. Tots can be risky; like ketchup, housemade versions rarely live up to the brand name we all know and love. But these easily outshine the bagged, frozen standard-setters; their blend of mashed potatoes, hashbrowns and seasonings speak to Strelnik’s cheffy background and fry up into delightfully golden croquettes, with plenty of wispy, crispy ends.

There’s more to Morning Collective than tots and sugary carbs, of course. Strelnik genuinely wants to please people, and so his menu reads like a good-faith attempt to offer every possible dish you might want for breakfast. If you’re cutting back on sugar, you can skip the pancakes and French toast and opt for something savory. If you’re trying to eat healthy, you can order an egg-white omelet or the Super Dooper Bowl, with quinoa, vegetables and poached eggs in roasted-tomato broth. Or you can skip breakfast altogether and grab a melty, cheesy Reuben or pork-belly Cuban. 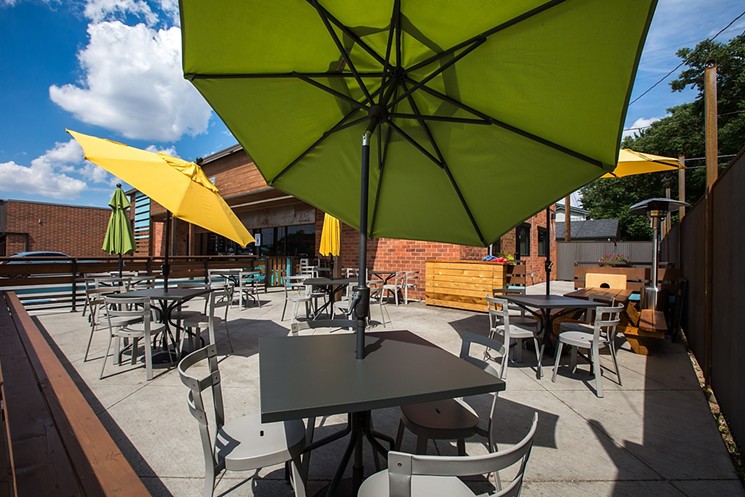 Imagine yourself here for lunch.
Danielle Lirette
The sad truth about people-pleasers, though, is that try as they might, they can’t be all things to all people. And often, the restaurant’s ambitious scope seems to get the better of the kitchen. The English-pea fritter at the base of the Spring Garden Benedict tasted like minty, mealy falafel, with the promised ragout amounting to just a few scattered vegetables. Hollandaise masked the most interesting part of the Three Lil Pigs, a tiny portion of java-rubbed and braised pork belly. The Cuban, with more of that dynamite pork belly, plus ham, cheese and pickles, was also shy of the good stuff. Watery tomato broth made the quinoa seem more un-drained than sauced. Such lapses could be a sign of an INFP — i.e., an idealist with good intentions. But more recent developments indicate that Morning Collective is more of an ESTJ, still outgoing but slightly more analytical and systematic.

Strelnik just launched a new menu, and increased the size of the pancakes at the same time. That shows he’s using his head, but his heart is also in the right place...and that’s more important than anything a personality test might tell you.