GABF Has a New England-Style IPA Problem, and It's Not Going Away

Weldwerks Brewing
The Brewers Association has, for the past ten years or so, been a little slow to respond to trends, changes and issues in the craft-beer industry. This is both a little strange, since the organization is the primary trade group for independent breweries nationwide, and understandable, since the BA is sort of like the industry’s mom: It likes to take a measured approach, talk to everyone and mull things over before making any rash decisions.

But that conservative pace will make for a particularly odd disconnect at this week's Great American Beer Festival, where the hottest new beer style to hit tap handles in years — those hazy, New England-style IPAs you’ve been hearing so much about (and probably drinking) — will be poured for attendees by dozens of breweries at their booths, but won’t be judged on their own in the competition since they don’t fit any existing GABF style categories.

“You only really have a shot at medaling if you are within the established framework for a beer style,” says Sean Buchan, the owner of Denver's Cerebral Brewing, which has garnered statewide and national attention for its New England-style IPAs. "Some haze is allowable in the IPA category, but it still greatly favors West Coast IPAs."

In other words, a beer has to fit the parameters of a certain style in order to have a chance of winning. Since New England-style IPAs are very different than traditional IPAs, they have very little chance of bringing home a medal. As a result, most of the breweries that make them won't enter them into the contest. "Rather than wasting an entry against 300 beers that better fit the category, we chose to enter beers we are confident have a chance at making the final table," Buchan says.

“It’s silly since we will be pouring our New England-style IPAs,” adds Neil Fisher, the co-owner of Weldwerks Brewing in Greeley, which had one of the longest lines at GABF in 2016 as people lined up to get a taste of Juicy Bits, one of the most sought-after examples of the style in Colorado, and its cousin, Double Dry-Hopped Juicy Bits. “But we won’t be entering any of them into the competition.” 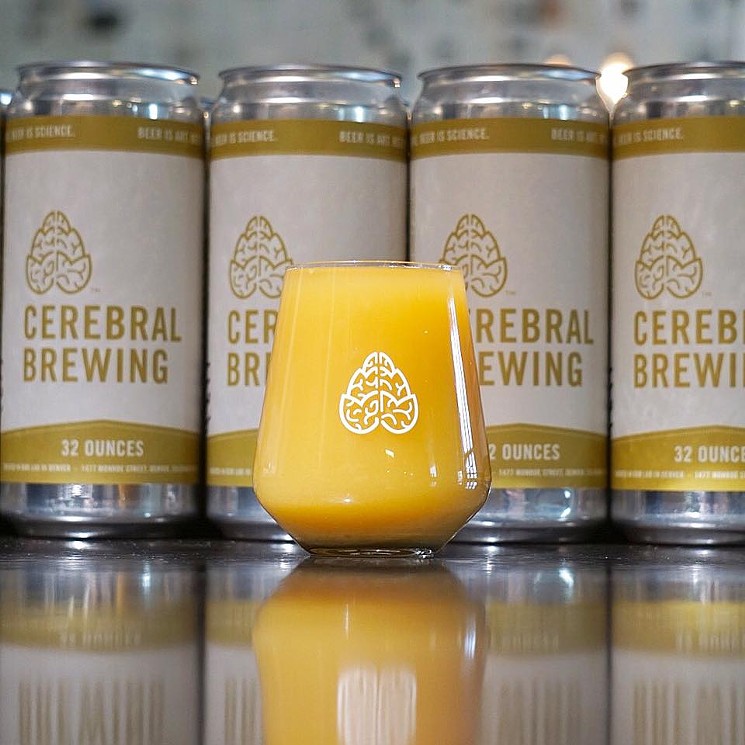 Cerebral Brewing
In 2016, as the style was just beginning to get hot nationwide, the Boulder-based BA, which produces the festival, said it was paying attention to the trend but preferred to take its time when considering whether or not to add a new category to the award competition. “We will have to wait and see,” competition manager Chris Swersey told Westword. “IPAs are a broad category, but the style could differentiate itself.” In the past, some “styles” turned out to be “more fads than beer styles, and then faded quickly.”

After GABF in 2016, Fisher and other brewers asked the BA to add a category for New England-style IPAs. “They would have had a hundred entries in year one,” he says. “My biggest argument for creating a style guideline is that we have more in common with each other than we do with West Coast IPAs. Ours are not just a derivative of those. They are something different. A style guideline would give us a base to work with.”

But the BA again decided against adding the category; in February, Swersey succinctly told Westword in an email that “the short answer is no, BA will not be adding that category in 2017.”

Six months later, the organization continues to provide no reasoning for the decision. “The Brewers Association Beer Style Guidelines, and the Great American Beer Festival Guidelines which follow from them, do not include a specific category to address these beers,” was all that new BA spokeswoman Ann Obenchain would say. “We advise brewers to review the beer style guidelines and to enter their beers in the categories which provide the best chance of success for their beer brands.

“These guidelines are ever-evolving, and each year, we review comments/suggested changes (usually in December/January) and make revisions for the upcoming year,” she adds.

Weldwerks had one of the longest lines at GABF last year.
Weldwerks Brewing Facebook page
It’s possible that politics are at play here. There is a strong dislike among many brewers and beer-industry professionals about whether New England-style IPAs represent a style or just lazy brewing techniques. This view, however, ignores the amount of effort and the science that goes into brewing New England-style IPAs, say brewers like Buchan and Fisher. It also focuses more on the look of these hazy beers than it does on the flavor and aroma profile, which is markedly different than traditional American IPAs.

Traditional American-style IPAs are clear and have a pronounced bitterness, which is measured in IBUs (international bitterness units). They also exhibit “various floral, fruity, sulfur/onion-garlic-catty, citrus-like, piney, resinous characters that are typical of though not exclusively from American-variety hops,” according to the BA’s style guide.

New England-style IPAs, on the other hand, usually look hazy or cloudy and have a softer mouthfeel and low bitterness. The hops flavor is still immense and expressive, though it veers toward sweeter, tropical notes — frequently described as being “juicy” — rather than being piney and resinous.

“I'd love to see a category for it. I think it would get almost as many entries as American IPA,” says Ryan Scott, co-owner of Odd13 Brewing in Lafayette, which specializes in New England-style IPAs. And while Scott says he feels like “the value of a GABF medal has declined somewhat” in recent years and that many of the most sought-after breweries in the country “don’t bother attending,” he still thinks it would be nice to win an award in that category — if it is ever created. “I'd enter as many of our beers as possible into it,” he says.

Scott is referring to breweries like the Alchemist, Treehouse, Trillium, the Other Half, Monkish, Tired Hands, Lawson’s Finest, Carton, Bissell Brothers and Finback. All of these breweries have national reputations for their New England-style IPAs, but none are attending GABF. Many others, though, like Modern Times, Bottle Logic, Nightshift, Great Notion, Prison City and Two Roads will be on hand at the fest. The beers they are entering or pouring at GABF haven't been made public yet.

Epic Brewing is has gone big into hazy IPAs.
Jonathan Shikes
Odd13 only entered one beer into the competition this year: its flagship Codename Superfan (in the American Strong Pale Ale category), only so that the brewery would also be allowed to enter the Pro-Am category, which represents a brewery’s collaboration with a home brewer. But Scott will be pouring four beers at his booth, including three New England-style IPAs: Codename, n00b and Hoperella.

Epic Brewing, which began producing a series of New England-style IPAs this year, also thinks it's silly that there isn’t a category for the style. But the brewery is taking a different approach.

“We entered ours in the American-Style IPA category knowing it would be booted,” says Epic national sales manager Darin McGregor. “If GABF wants to fail to recognize this as a legitimate style, then that is on them. We aren’t going to do that for them by not entering one of the beers we are most excited about.

“If people keep entering them year after year, the BA will have to change the style guidelines at some point,” he adds. “We entered what we entered, and we’ll let the chips fall where they may.”