Colorado Cooks Up a Top Performance on Top Chef 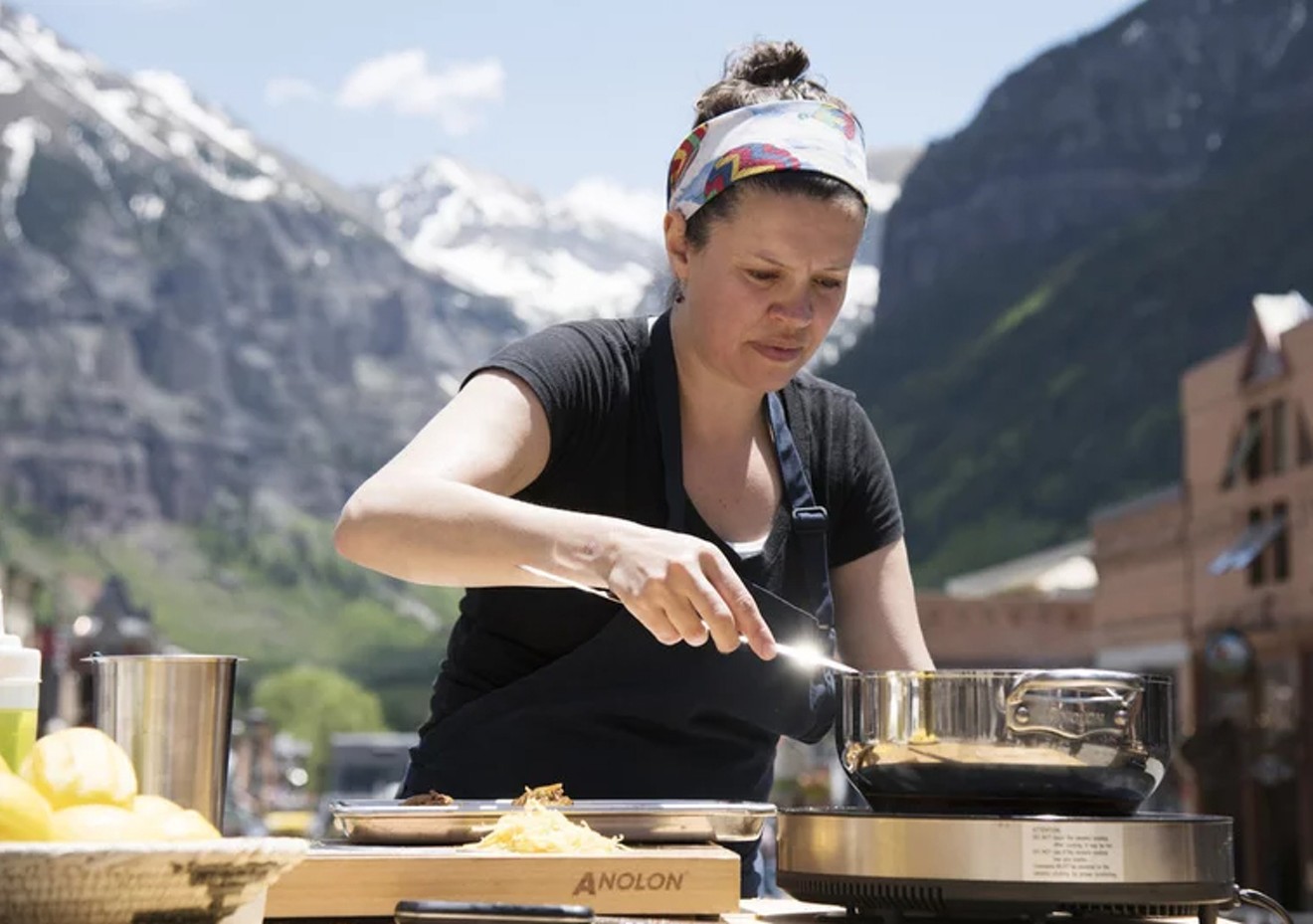 Bar Dough executive chef Carrie Baird was one of four finalists on Top Chef Colorado. Courtesy of NBCUniversal
Top Chef Colorado will crown the victor of the fourteen-part Bravo series on Thursday, March 8. But Bar Dough executive chef and partner Carrie Baird, who was one of four finalists before she was eliminated (her stroganoff sauce could have been better) already feels like a winner. “The best part of all of this is how good Colorado has made me feel about how well I did,” she says. “I have strangers coming up to me saying, ‘You represented Colorado so well, we’re so proud of you.’ That just warms me through. I’m so proud of Colorado.”

Bravo’s announcement last spring that it would film the next Top Chef in Colorado — with a $1 million incentive package put together by Colorado Office of Film, Television, and Media, along with help from the Colorado Tourism Office, Visit Denver and booster groups in Telluride and Aspen, among others — represented a major coup for this state’s restaurant industry. After all, the previous fourteen editions of the reality-show kitchen competition had largely been set in indisputable culinary destinations: smaller jewels like Charleston, New Orleans and Seattle balanced such dining power markets as New York, L.A. and San Francisco. Would Colorado finally take its rightful place on the culinary map?

But as Fruition and Mercantile owner Alex Seidel, who made an appearance as a guest judge in one episode, points out, Denver didn’t really need Top Chef’s validation. “We were putting ourselves on the map before that — we’ve had a lot of momentum over the last five years,” he says. “We’ve been building the restaurant community, Slow Food Nations came here, and we’re bringing in top-name chefs like Alon Shaya.” A celebrated New Orleans-based chef, Shaya will be opening a restaurant in the forthcoming Source Hotel — but that deal was in the works before Top Chef Colorado started screening in December. “I think we already had that energy,” Seidel continues. “But Top Chef putting a stamp on it and putting us in front of a national audience helps to highlight what we’re about.”

“It’s good to put that notch on your belt buckle,” agrees Troy Guard, who guest-judged brunoise cuts and butchery in a Top Chef Colorado Quickfire challenge. “When people watch these things, they think, ‘Oh, wow, that city does look cool.’”

In fact, Top Chef Colorado makes not just Denver, but the entire state look cool. As in previous seasons, producers focused on ingredients and elements unique to the setting, to give viewers a true taste of local cuisine. According to the Top Chef view of Colorado, that encompasses camping food, Rocky Mountain oysters (“I hope no one is allergic to nuts,” quipped host Padma Lakshmi), Broncos tailgate fare, a lot of game meat, the Denver omelet and, curiously, German food. The show has also taken some jabs at Denver’s former cowtown status; one challenge even had the cheftestants reimagining meat and potatoes during a stormy Larimer Square street fair.

There were some nice surprises, too. Comal, the restaurant incubator and training space for immigrants, played a prominent part in one episode. And while every cook knows Colorado lamb, the show also highlighted the Fruition Farms sheep’s-milk creamery, in the process emphasizing Colorado’s reputation for health and youth.
One chef compared owner Seidel to flowing-locked Norse god Thor, a description that Seidel is still getting ribbed about. That a couple of chefs brought Fruition Farms cheese back for a later episode — and contestant Bruce Kalman subsequently started using the cheese in his L.A. restaurant — testified to the quality of the product.

Carrie Baird is back in the kitchen.
Tommy Garcia, Bravo
Still, nothing better represented the Centennial State on Top Chef than the two competitors who hail from here. In addition to Baird, there was Brother Luck, a Colorado Springs resident who’d opened Four by Brother Luck in that town just days before shooting started. He came in tenth, after surviving four challenges in the Last Chance Kitchen.

Luck brought global influences to his cuisine, doing a Japanese take on a Denver omelet, for instance, that earned him a Quickfire win. Baird stuck closer to home for her inspiration: She dubbed her team’s Restaurant Wars eatery Conifer and gave it a Colorado flavor; showed deft work with game meats; made green chile cheese fries for the Broncos tailgate party (the show’s only reference to green chile); and in one particularly rugged challenge, fashioned a makeshift oven in the snow in order to cook an upside-down cake in the woods outside Estes Park. And Baird showed Colorado cool in more than her cooking; she came off as many of us would like to imagine ourselves: down-to-earth, athletic, agile, never rattled and always upbeat. Often clad in a head scarf and hoodie, she occasionally played the role of peacemaker, though she says drama on the set was rare. “We genuinely had a good time,” Baird adds. “Other seasons looked a little torturous. That didn’t exist in season fifteen.”

During the filming, Baird says, she learned that she was stronger than she thought, that she could hold her own with big-city chefs who’d trained with some of the country’s biggest names. And as the season marched forward, that confidence became more and more apparent: In a move that brought flak from other competitors, she took two different challenges with fancy toast. Even more remarkably, those toasts won the approval of some of the highest-profile chefs in the country, Manresa’s David Kinch and molecular wizard Wylie Dufresne. (The French onion soup topper she made for Dufresne to showcase sarsaparilla during a segment filmed in Telluride is now on the menu at Bar Dough.)

The humble, comforting whimsy of Baird’s fancy toast made a great metaphor for our dining scene.
Let’s hope this city’s confidence in the restaurant scene grew along with Baird’s. Because Top Chef was not so much an anointing of Denver’s role as a top-dining destination as it was a fourteen-week reflection on why dining in the Rockies is already great.