Whatever you do, don’t skip the bologna sliders. Danielle Lirette
Bologna isn’t something I normally get excited about; it’s the mystery meat of childhood. But on a menu full of good eats at FNG, Troy Guard’s rock-and-roll-themed restaurant in Highland, a bologna slider is the surprise straight-to-platinum single.

The allure lies in the details, none of which is extraneous, and all of which add up to a few perfect bites. First the bun, a King’s Hawaiian roll, squishy, soft, sweet. Then bologna, originally housemade mortadella but no disappointment now that it’s sourced. The meat is griddled until it curls and gently crisps around the edges, an extra step that lifts it out of lunchbox territory and into the realm of bacon. A slice of Swiss, not too thin, not too thick, quietly makes it presence known; a milder cheese would’ve gotten lost. Thousand island dressing, akin to special sauce, adds harmony without mustard’s sharpness or the sweetness of ketchup. Then the stroke of brilliance: a ridged potato chip, like a secret, salty code from one sandwich lover to another, a bass note of texture.

Sliders, ordered by the piece from the Slider Corner, can be combined with tots, fries or a salad for a satisfying meal. Options more respectable than bologna (what is it about the word “bologna” that makes you want to snicker?) might catch your attention first; they’re more in alignment with the way we eat these days. There’s rotisserie chicken with arugula and garlic aioli. A burger with lettuce and grilled onions. Fried chicken. A pile of hand-carved lamb, rubbed with berbere spices, riddled with wood smoke from the rotisserie and finished with red-pepper pesto. But whatever you choose from that list, include at least one bologna slider for each person at your table. Not even the haunting voice of your kindergarten teacher could make you share.
Even if that bologna slider was a quick hit, FNG’s kitchen took some time to find its groove. The original emphasis was on meat-centric fare, but comfort “was what the guest was looking for,” says Guard, who revamped a quarter of the menu after early feedback; the opening chef also left the week FNG opened. But things have gotten settled since then, and the current menu successfully straddles the line between nostalgic and contemporary, with a mix of small plates, sandwiches, housemade pasta and such down-home favorites as meatloaf and chicken-fried steak.

The design worked from the start: This is a neighborly spot with nothing to prove — except maybe that comfort food at a restaurant can be just as good as homemade. The vibe is youthful and raucous, slightly diner-like on the perimeter, where garage-door windows flood a family-friendly section with fresh air and sunlight. The inner dining room, bordered by the bar and kitchen, is darker and more atmospheric, a cross between a lounge and the Brady Bunch living room. Vintage album covers (Ozzy Osbourne, Led Zeppelin, etc.) hang on the walls, many from Guard’s teenage collection. Servers sport band T-shirts. Music from the ’70s and ’80s is cranked at all times, sometimes so loudly that you’ll shout or give up trying. The noise level makes it easy to bring kids, as do toy-filled lunchboxes and a pinball machine to ease the wait for food. 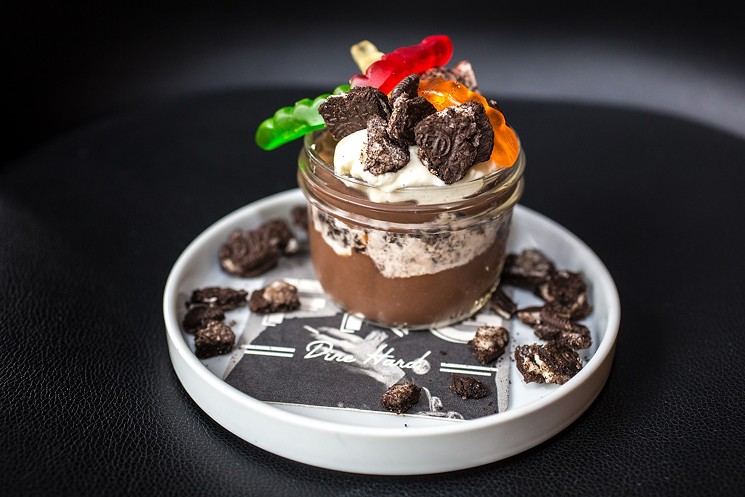 Dirt and worms dessert.
Danielle Lirette
Unlike at Guard’s early restaurants, where you sensed he had a lot to prove (think Pop Rocks and python), FNG is guest-facing, with ingredients chosen because they make a dish better, not because they make a loud and/or flashy statement. Tater tots work so well as croutons on a salad of arugula, fennel and smoked salmon, it’s a marvel that anyone bothers to toast bread. White sauce hinting of parmesan proves that meatballs go with more than red sauce. (It also provides a luxurious distraction when those meatballs are dry, as mine were.) Bison is right at home in meat enchiladas, brined and braised with citrus and chiles so that the meat holds its own under the knockout red-chile smother.

Even when you suspect an element might be flashy and gratuitous, it can prove to be essential: The heat of the jalapeño poppers in the mashed potatoes was clever, and rescued a plate of tough snapper in the catch of the day. And while a whole heirloom carrot, raw and too fat to bite, was definitely a gratuitous addition to the funky hummus, what was essentially a nicely smoky baba ghanoush also came with easier-to-eat veggies.

Grilled meatloaf and mashed potatoes.
Danielle Lirette
Meatloaf seems like a family recipe, perfected and passed from one generation to another, but Guard designed it just for FNG. Sliced thick and grilled with baked-on, slightly caramelized ketchup (the best kind), the meatloaf is plated so full, with heaps of mashed potatoes, green beans and cipollini gravy, it’s like the kitchen anticipated your request for seconds. The chicken sandwich is also generous; after all, quantity is a key part of comfort food. The sandwich is like the fried-chicken slider, only bigger, with pickles, slaw and a thin, crispy breast that hangs far over the edges and could nearly fill two buns. The only dishes I could have used less of were the overly tomatoey Bolognese and the banana cream pie, which had the springy texture of Jell-O. Dirt and worms makes a much sweeter ending, with house chocolate pudding and gummy worms digging into crushed-Oreo “dirt.”

If the closing of Bubu and Lucky Cat in Lowry taught Guard anything, it’s that “location trumps all,” he says. In other words, he learned the importance of giving the neighborhood what it wants. And with FNG, he did just that, creating a fun, affordably priced restaurant that any neighborhood would be happy to claim. And others might get the chance: Asked about possible expansion, he replies, “I may be looking.”

That’s good news, because FNG lives up to its name: It’s fuckin’ good.

Danielle Lirette
KEEP WESTWORD FREE... Since we started Westword, it has been defined as the free, independent voice of Denver, and we'd like to keep it that way. With local media under siege, it's more important than ever for us to rally support behind funding our local journalism. You can help by participating in our "I Support" program, allowing us to keep offering readers access to our incisive coverage of local news, food and culture with no paywalls.
Make a one-time donation today for as little as $1.