Art Attack: 24 of the Best Things to See and Do on First Friday

Clark Richert, "Tree of Life" (detail), 1970, fluorescent paint on paper. Image courtesy of the artist
September's First Friday will hit like an earthquake, but it’s a welcome shake-up, with what seems like every gallery in the region dropping a new show for the fall season. That's in addition to Crush Walls, which will continue to paint much of the town through the weekend.

As a result, art lovers have their choice of arty opportunities, starting with this whopping list of 24 events:

Karen Watkins guest-stars at Valkarie Gallery.
Karen Watkins
Karen Watkins, Alterations
Valkarie Gallery, 445 South Saulsbury Street, Lakewood
September 4 through September 29
Opening Reception: Friday, September 6, 5 to 9 p.m.
Salida-based artist Karen Watkins is down from the hills to show off a new batch of her woodsy, pop-surreal paintings of animals and wild places as a gallery guest at Valkarie. There’s a touch of anime style to the series, which riffs off the idea of decorative carousel animals let loose in the wild.

Loren Yagoda's ceramic bowls are in the Spotlight at Urban Mud.
Loren Yagoda
Loren Yagoda
Urban Mud, 530 Santa Fe Drive
Opening Reception: Thursday, September 5, 5:30 to 9 p.m.
Urban Mud turns over a new leaf for its second show, a solo by Phoenix-based ceramicist Loren Yagoda, who is known for her roughly beautiful, ragged-edged clay bowls, which look as good on the wall as they do on a table. A portion of the proceeds from sales of Yagoda’s work will be donated to National Jewish Hospital.

Cara Enteles, "A Second Look," oil and silkscreen on aluminum panel.
Courtesy of the artist
Organic Subtleties
Walker Fine Art, 300 West 11th Avenue
September 6 through November 2
Opening Reception: Friday, September 6, 5 to 9 p.m.
Walker Fine Art explores new facets of nature in art with Organic Subtleties. The exhibit focuses on the bare bones of the subject matter: the cast of light, gradations of color, shadows and sunbeams. The work of the six artists includes wanders from the metal and mesh constructions of Atticus Adams to the delicate watercolor florals of Brian Comber, stopping everywhere in between.

Natural Patterns: HABIT(u)ation opens at Alto Gallery on First Friday.
Thomas Scharfenberg
Natural Patterns: HABIT(u)ation
Alto Gallery, 4345 West 41st Avenue
September 6 through 28
Opening Reception: Friday, September 6, 6 to 10 p.m.
Just as people rebury themselves in jobs and children go back to school at the end of the summer, Alto Gallery’s new group show looks at recurring routines in everyday life and how natural patterns bring balance in modern times through works by Ashley Frazier, Clay Hawkley, Eileen Roscina, Thomas Scharfenberg and Anduriel Widmark. We all need something soothing to counter the shock of ramping up for the fall. 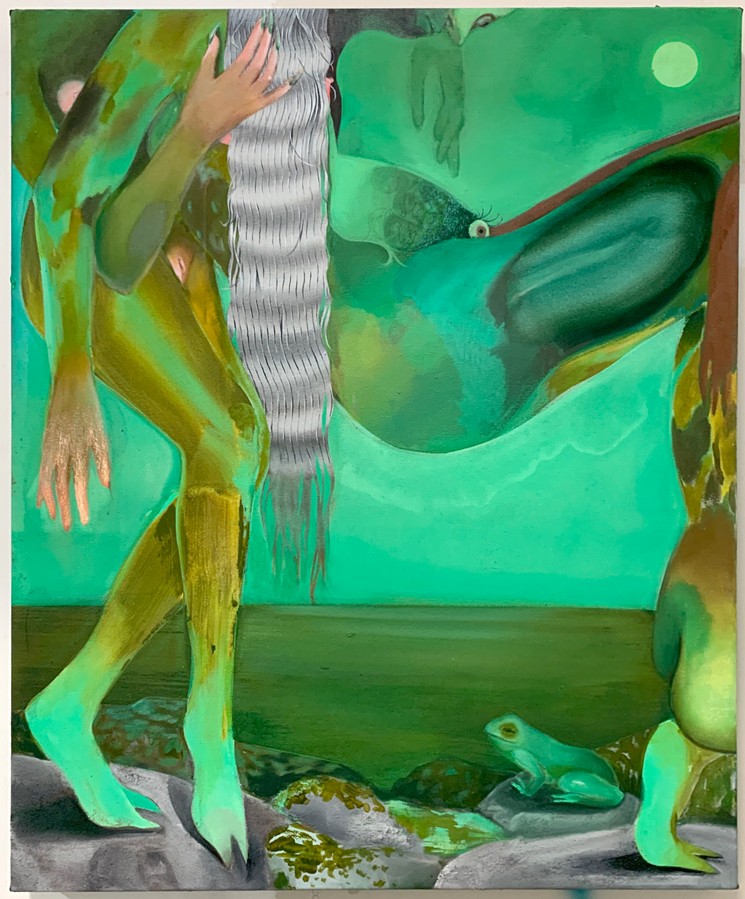 Kym Bloom, Urban Candy
Kanon Collective, 6851 West Colfax Avenue, Lakewood
Opening Reception: Friday, September 6, 6 to 10 p.m.
Although Kym Bloom is known for her pixelated candy art, she’s also a prolific photographer who uses numerous forms of printing technique to finish her images. She’ll have a raft of affordable, photo-based work with images of classic neon signs, alleyway graffiti and other urban views on the walls of Kanon in its new home in Lakewood.

CHAC revs up for a bouncy lowrider show in September.
Photo credit: Lucille Ruibal Rivera
September Lowrider Exhibition
Chicano Humanities and Arts Council, 222 Santa Fe Drive
September 6 through September 29
Opening Reception: Friday, September 6, 6 to 9:30 p.m.
With Mexican Independence Day only days away, it’s lowrider season in Denver — and the perfect time for CHAC to offer a love letter to the cherry, pinstriped vehicles that bounce on hydraulic lifts, a tradition in the Chicano community. A large, open-entry show with lots of prideful art, CHAC’s lowrider exhibition is an occasion to party on First Friday, courtesy of spins by DJ Big Moe.

SubRosa Performance
Center for Visual Art, 965 Santa Fe Drive
Friday, September 6, 5:30 to 7:30 p.m.
Free, RSVP at eventbrite.com
The community-embedded “cyberfeminist” collective subRosa will appear in person on First Friday at the Center for Visual Art, where the group is featured as part of the eye-opening exhibition Collectivism. Billed as a performance, subRosa’s live evening comprises a “neighborhood noticing walk” to stir conversation about the effect of a crowd observing a culturally entrenched neighborhood in flux. It’s a subtle lesson in the process of creeping gentrification, and you’ll want to wear sturdy shoes.

Plastisol Free for All!
Abstract, 742 Santa Fe Drive
Friday, September 6, 4:30 to 8:30 p.m.
Abstract brings back an old IndyInk favorite for First Friday: an exhibition of hand-screened T-shirt art that doubles as a competition for cash prizes. On September 6, winning images will be chosen by popular vote; come back on Third Friday — September 20 — when the winners will be announced and you’ll be able to buy their limited-edition designs.

Anthony Lister mashes up styles in Modern Masters.
Anthony Lister, Mirus Gallery
Anthony Lister, Modern Masters
Mirus Gallery Denver, 1144 Broadway
September 6 through October 12
Opening Reception: Friday, September 6, 6 to 7 p.m.
Free, RSVP at eventbrite.com
Anthony Lister, a street artist with fine-art cred, fits right in with the Crush Walls emphasis this weekend with a show that mixes metaphors and masters in homage to figures in modern-art history, from Picasso and Matisse to Andy Warhol. Although he incorporates hallmark visuals of the greats, Lister still stamps the paintings with his own eye, making wall-worthy mashups of styles and techniques.

Alexander Ablola imagines the future of street style.
Alexander Ablola
Mars in Scorpio: The Desert of The Real
Union Hall Denver, 1750 Wewatta Street
September 6 through October 19
Opening Reception: Thursday, September 5, 7 to 10 p.m.
Union Hall, the black-box gallery space at the Coloradan near Union Station, opens up to fashion with an unexpected installation by photographer and streetwear aficionado Alexander Ablola, whose dystopian and futuristic visions of style are derived from advanced technology and artificial intelligence. It's gonna be fun, and little bit weird.

NoBo Art District Tenth Anniversary Celebration
NoBo Art District, along Broadway from Pine Street to Highway 36, Boulder
Friday, September 6, 6 to 9 p.m.
North Boulder has its own culture and its own territory, dubbed the NoBo Art District for the past ten years. To celebrate the landmark, district galleries and businesses will come together for a festive collision between First Friday and the NoBo Art District Tenth Anniversary Celebration, with open houses, live music, demos and special shows, like the Denver/Boulder Artist Swap, which will bring familiar faces from Edge Gallery to R Gallery, 2027 Broadway in Boulder. Find a complete schedule and interactive map at noboartdistrict.org.

Interested in having your event appear in this calendar? Send the details to [email protected]. For more events this weekend, see this week’s 21 Best Things to Do in Denver.
KEEP WESTWORD FREE... Since we started Westword, it has been defined as the free, independent voice of Denver, and we'd like to keep it that way. With local media under siege, it's more important than ever for us to rally support behind funding our local journalism. You can help by participating in our "I Support" program, allowing us to keep offering readers access to our incisive coverage of local news, food and culture with no paywalls.
Make a one-time donation today for as little as $1.