Tacolandia will bring more than forty restaurants, taquerias and food trucks to Civic Center Park on Sunday, August 20. Danielle Lirette
Consider August the golden hour: July's heat is gone, but fall isn't quite here yet, making this month the ideal time to get out and about. Celebrate Denver's Mexican heritage and food at Westword's second-annual Tacolandia, or kick off the High Plains Comedy Festival at a preview show. Give a nod to the Mile High City's artists at Archives for Artists or celebrate the life of beloved Boulder poet Jack Collom. It's all in this week's 21 best events in Denver.

Drug users too often live under a shadow, far from social services and medical help. That’s partially why Colorado lost 912 people to overdoses in 2016 alone. The advocates who successfully pushed the state to legalize syringe-exchange programs and who train Denver residents on how to administer the life-saving drug Naloxone are taking the fight for harm reduction to the next level, pushing to legalize supervised injection sites, or places where people can use drugs under the care of medical professionals. The Harm Reduction Action Center and the Drug Policy Alliance are teaming up for a Supervised Injection Community Forum, which will include a screening of The Caring Community: Ithaca and the Movement for Supervised Injection Facilities and a conversation — Sexy Pizza provided — on supervised injection sites. The evening runs from 5:30 to 7:30 p.m. on Tuesday, August 15, at the Denver Central Library, 10 West 14th Avenue Parkway. For more information, call the Harm Reduction Action Center at 303-572-7800 or visit the event’s Facebook page.

Although the High Plains Comedy Festival doesn’t stage its Baker takeover until the final weekend of August, a handful of visiting festival comics are arriving in Denver early and popping up in local showcases around town. On Wednesday, August 16, at 8 p.m., the Laugh Night on Earth, a free monthly showcase at the Sloan’s Lake Alamo Drafthouse’s BarFly, 4255 West Colfax Avenue, is serving as an official High Plains preview show, with a lineup full of festival performers including Georgia Rae, Matt Monroe, headliner Shane Torres and MC Zac Maas. With custom cocktails and a rotating roster of 32 Colorado brews on tap, Barfly is an ideal space for unwinding with a drink after a movie or, more important, catching a free comedy show. Visit the event’s Facebook page to learn more.

The Boulder International Fringe Festival is like the farmers’ market of eclectic performance art: Starting with an “All You Can Artist” festival-preview buffet on Wednesday, August 16, you can pick and choose which of twenty local and visiting acts to see at eleven different venues between the 16th and the 27th, and maybe even work in a Flatirons hike. This year’s lineup includes a politically charged burlesque show (fittingly, it’s called Pussy Grabs Back); a genderqueer cabaret; an audience-engaging, genre-spanning dance piece; and a solo performance about Baba Yaga that incorporates shadow puppets. Tickets for individual performances range from $5 to $15, and Fringe also offers a five-punch card ($50) and whole-festival pass ($190); find them and a full festival schedule at boulderfringe.com, or purchase tickets in person between 11 a.m. and 4 p.m. through August 26 at Trident Booksellers & Cafe, 940 Pearl Street in Boulder. Tickets are also available at venues thirty minutes prior to the first show of the day. 

This is not your grandmother’s polite summer excursion: The Dead Beat Walking Tour leaves Union Station at 6:30 p.m. Thursday, August 17, for a trip through some of Denver’s most colorful history. During the one-mile trek, you’ll follow in the footsteps of such bad boys as Neal Cassady and Jack Kerouac, and learn how the Beat poets influenced both Ken Kesey’s Magic Bus trips and the shape of the modern Mile High City. “I wanted to create something that pays homage to what makes Denver unique,” says Summer Waters, guide and owner of Colorado Walking Tours, who’s offering this inaugural trip for just $15. The tour will include a stop at My Brother’s Bar, Denver’s oldest watering hole, and will end at Carbon Cafe, just steps away at 1553 Platte Street. For more information, go to coloradowalkingtours.com.

If you have to go grocery shopping, you might as well do it at a Natural Grocers location. Because on Thursday, August 17, the chain is celebrating its 62nd year in business, and is offering free ice cream sundaes (dairy and non-dairy, of course) and root beer floats at all its locations from 4 to 6 p.m. They say you shouldn't shop for food on an empty stomach, right? Find the store closest to you at naturalgrocers.com.

Raise a glass while chowing down at the eleventh annual Corks & Forks on Thursday, August 17. From 6 to 9 p.m., you can enjoy a selection of fine wines and sample dishes prepared by chefs from such favorite foodie haunts as Tamayo, Stoic & Genuine and Angelo’s Taverna, to name but a few of the establishments vying for the prestigious Golden Fork and Golden Cork Awards. Between bites, you can bid on an array of shopping treasures at a silent auction, boogie to live music, or simply take in the majestic city views that surround the rooftop terrace of DaVita World Headquarters, 2000 16th Street. Corks & Forks is not only about good food, though: A portion of the evening’s proceeds will go to the National Sports Center for the Disabled. Visit nscd.org to learn more and buy tickets, $75. 

Denver is a favorite guinea pig for Broadway-bound Disney musicals. Starting Thursday, August 17, you can get a sneak peek at the latest, Frozen, which opens here for a seven-week test run before heading to the Great White Way. And what’s not to love? Frozen is all about sisterhood and women standing up for one another; the music includes the little ditty “Let It Go,” an Academy Award-winning song that’s mega-inspirational to all, no matter your age or gender. The show goes on through October 1 at the Buell Theatre in the Denver Performing Arts Complex; tickets, which are selling out quickly, start at $25. Reserve your seats at denvercenter.org or call 303-893-4100.

Patrick Mueller of Control Group Productions likes to stage dance performances in alternative spaces and states of mind. He’s taken audiences on bus tours and danced around them in the dark, treated them to full-immersion party productions and unveiled new works in untried, bare-bones venues. For his newest venture, Neverhome, Mueller and troupe will lead folks on walking tours powered by a migration theme, telling a transitory tale of displacement through movement, poetry, music and visuals. For a suburban/rural experience, join the crew on Friday, August 18, or Saturday, August 19, at the Broomfield Depot Museum, 2201 West Tenth Avenue in Broomfield, or opt for an urban journey leaving from MCA Denver, 1485 Delgany Street, on August 24 and 25, or September 1, 2 and 3. Tours set off from both locations at 5:30, 6:15 and 7:30 p.m., and admission is $8 to $12 in Broomfield and $10 to $15 in Denver. Purchase tickets to either spot at brownpapertickets.com, and learn more at controlgroupproductions.org.

Conquer a fourteener while supporting the efforts of Junior Achievement-Rocky Mountain at the third annual Charity Ascent of Mount Bierstadt on Friday, August 18; you can help raise funds while heading high into Pike National Forest. Gather with other hikers at the trailhead on Guanella Pass at 7 a.m., then join them again at 5 p.m. on Wednesday, August 23, for a lively after-party on the rooftop of Enterprise Coworking, 3000 Lawrence Street. The fee is $100 per individual, or $500 for sponsored teams of four; non-hikers pay $50 for a T-shirt and admission to the party. Visit jacolorado.org to learn more, buy tickets or donate.  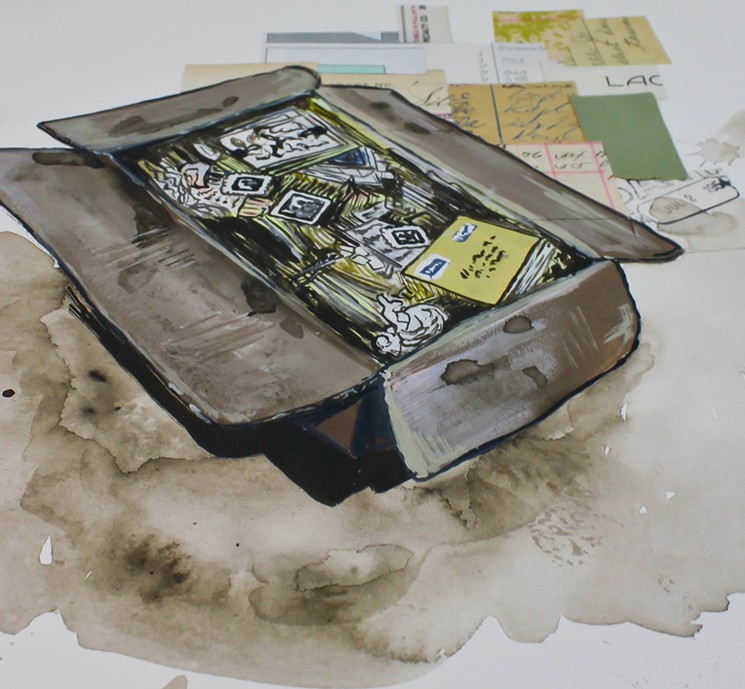 Archives for Artists aims to brainstorm ways to archive the work of Denver's artists.
Lauri Lynxxe Murphy
In our overgrown city, many Denver artists feel underappreciated. But if Jessie de la Cruz and Sigri Strand have their way, their joint project, Arthyve, will offer support to our struggling-yet-united artist community by archiving not only their work, but also their resolve to carry on. To get the word out, they’ll formally introduce Arthyve at Archives for Artists, a full day of panel discussions and brainstorming about the project. “If Arthyve is successful, droves of known and unknown Denver and Colorado creatives will get equal exposure,” says de la Cruz, who will open the assembly as the keynote speaker. “In a perfect world, artists who would have never been discovered will be seen, heard and have their legacy live on after they’re no longer with us — not just in a box on a shelf in secure, climate-controlled storage, but through exhibits, workshops and programming.” Potential participants and arts supporters alike are invited to Archives for Artists from 9 a.m. to 5 p.m. Friday, August 18, at the McNichols Building, 144 West Colfax Avenue. Tickets are $12, available at eventbrite.com; for more information about Arthyve’s goals, visit arthyve.org.

Good improv takes planning. To help ensure that the Denver Improv Festival goes on as scheduled in October, the GroupMind Foundation is throwing ImProm, a soirée where you can rewrite your own prom-night denouement — or not, if the original was truly unforgettable. Don your tuxes and sparkly dresses for a rerun for the ages, complete with dancing, games and a cash bar in addition to the surprise endings. The balloons will rise over ImProm from 7 to 11 p.m. on Saturday, August 19, at Massif Studios, 2191 South Broadway; for tickets, $15, go to eventbrite.com.