So much gear, so little time. Brandon Marshall
Isn't it always more fun to have fun for a good cause? Give back to your local DIY space 7th Circle at the Alamo Drafthouse, and drink for a good cause at the Winter Brew Fest. Of course, no one would blame you for wanting to have just a plain ol' good time, of which there is plenty in this week's event's calendar, from a PJ crawl to a trip to India and down memory lane. And of course, don't miss the massive Outdoor Retailer & Snow Show. It's all here in the 21 best events of the week!

If you haven't yet read Denver author Adrian Miller's book The President's Kitchen Cabinet: The Story of the African Americans Who Have Fed Our First Families, From the Washingtons to the Obamas, Miller's Book Talk and Signing at the Denver Women's Press Club on Tuesday, January 23, will offer the perfect overview of his work. The attorney turned "soul food scholar" will share stories of chefs who have cooked for every presidential administration in our nation's history, including the emotional tale of Senior Master Sergeant Wanda Joell, the first African-American woman to serve on Air Force One, who was on board with President George W. Bush on September 11, 2001. The free talk at the historic (and reputedly haunted) building, at 1325 Logan Street, goes from 6 to 7 p.m. Get details at the Soul Food Scholar Facebook page.

To paraphrase Ned Stark, "Spring is coming." With spring come the birds and the bees, and while backyard robin-raising technology is still in its infancy, beekeeping is pretty well established (and the payoff is much tastier). Learn all about setting up your own hive at the Backyard Beekeeping Class on Tuesday, January 23, at the Majestic View Nature Center, 7030 Garrison Street in Arvada, from 7 to 8:30 p.m. You'll learn about the honeybee's life cycle, how small-scale beekeepers impact bee populations, and the equipment you'll need to start a backyard hive — all in time to get your apian guests established this spring. Sign up for the class, $12, at the Center's Facebook page, and get ready to create a buzz in your neighborhood.

More and more residents are becoming aware of Denver's deep pool of comedic talent, which is more diverse than the scene's bearded white guys would suggest. Indeed, there's a strong argument to be made that Denver's comedy scene would fall apart without the guiding influence of powerful women, including Amy Jenssen King, general manager of the Denver Improv, 8246 East 49th Avenue. Celebrate the achievements of the hardworking women on the mic and behind the scenes at Divas of Comedy, a standup showcase starting at 7:30 p.m. on Wednesday, January 24, with local powerhouses ShaNae Ross, Midori Marquez, Stephanie McHugh, Donelle Prado and Pam VonNostern. Call 303-307-1777 or visit the Denver Improv's box-office page to buy tickets, $10, and learn more.

Over the course of 38 informative installments, Nerd Nite Denver has delighted local wonks with a wide-ranging series of talks from experts in various fields. Catnip for those who love documentaries, TED Talks and NPR, Nerd Nite has found a home at the Oriental Theater, 4335 West 44th Avenue, thanks to the joint efforts of Sexpot Comedy and newly minted host/producer Hanna Aucoin. The Nerd Nite crew is beginning 2018 in earnest at Blooood, Video Games, and Cosplay, with medical laboratory scientist Jessie Hanson discussing the history of blood transfusions, gamer Jennifer Hill expounding on the evolution of video games, and an examination of cosplay's charitable ends with Matt Gnojek (aka Colorado Captain). Join the bespectacled crowd on Wednesday, January 24, at 6:30 p.m. for a unique event that answers the question: “What if a great professorial lecture had a full bar?” Find tickets and more on the event's Facebook page.

Guard of the Taj unravels a centuries-old mystery.
Courtesy of BETC
Thursday, January 25

Those who believe in the power of public parks and strict environmental regulations are having a rough go of it as the Trump administration scales back protected lands and turns over wide swaths of once-regulated natural space to drilling and other commercial uses. It’s in this doomed climate that the Wild and Scenic Film Festival is traveling the country, stopping in Denver on Thursday, January 25, to screen short movies about everything from protecting the Arctic to the plight of gray wolves and bumblebees. The fest will be at the Sie FilmCenter, 2510 East Colfax Avenue; a reception and "citizen action hub" begins at 5:30 p.m., and the films start rolling at 7. Tickets, $14 to $15, are available at denverfilm.org.

Cooking at home can save money and calories, but coming up with a new menu every night can feel daunting. The same goes for coming up with a menu to entertain guests. Here to save home cooks from their chicken-and-green-beans rut is the CeLAMBrate Workshop. From 6 to 8 p.m. on Thursday, January 25, Everyday Hostess blogger Kaitlin Chad will share her tips on crafting the perfect cocktail party, and Climbing Grier Mountain's Lauren Grier will make the perfect food accompaniments (or just a really great dinner on a Tuesday night): spiced lamb pita toasts with fresh mint, and Turkish lamb sliders with labneh. Blackbelly will be on hand to serve charcuterie, plus beer, wine and cocktails to wash down all the lamb-tastic dishes. Get to know the other, other red meat and even take some of your own home: The 21+ event takes place at Cultivated Synergy, 2901 Walnut Street. Find more information at americanlamb.com.

Rajiv Joseph’s Guards at the Taj takes on a horrifying myth surrounding the Taj Majal, an architectural feat executed by 20,000 workers over a period of twenty or more years. Its two-man cast, a bantering Godot-like pair, shed light on the divide between the haves and the have-nots in an allegory fit for modern times, though it’s set in Agra in the seventeenth century. When the Boulder Ensemble Theatre Company presents Guards, beginning with a preview performance on Thursday, January 25, at 7:30 p.m., be prepared for a story that unfolds on the human level before escalating into something dark and catastrophic. Guards runs through February 18 at the Dairy Arts Center, 2590 Walnut Street in Boulder; for showtimes and tickets, $20 to $45, go to tickets.thedairy.org. 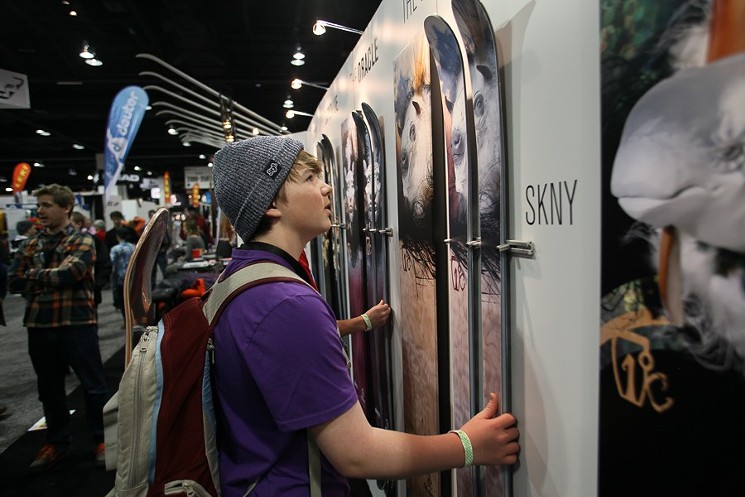 There will be plenty of these at the Outdoor Retailer & Snow Show.
Brandon Marshall
After years of wooing, Denver finally landed the combined Outdoor Retailer & Snow Show — so this year, the trade expo, which runs Thursday, January 25, through Sunday, January 28, will fill the Colorado Convention Center with demonstrations, seminars and exhibits from anyone who's anyone in the outdoor sports industry. Although you must register (and pay) to attend the show, events will spill out into after-parties all over town. At 8 p.m. on January 25, for example, Temple Nightclub will host what's being billed as "the best party ever," with none other than George Clinton & Parliament Funkadelic; admission is free with an OR&SS badge (and closed to others). But anyone can head to the Source on January 26 for the late-night bash hyped here. Find out more about the show and related events at outdoorretailer.com.

While the Outdoor Retailer & Snow Show will bring a blizzard of activities to metro Denver, there's plenty of action up in Aspen, too, where the X Games Aspen run Thursday, January 25, through Sunday, January 28. Athletes will heat up the slopes with four days of grueling competition, starting with the Men's Snowboard Slopestyle Qualifying and ending with the Snowbike Best Trick. It's free for spectators, which is handy, because you'll want to save all your cash for the concerts that always accompany the Games...and then there's just the cost of surviving in Aspen. But as parties go, this annual bash is priceless. Get full details at xgames.com/aspen.

Are professional women in Colorado thriving in the creative industries? The numbers look pretty good. To highlight their success stories, the Colorado Women's Chamber of Commerce, the Colorado Business Committee for the Arts and Walker Fine Art are collaborating to bring you Thought Leaders: Backstage With Women in the Arts, a panel discussion led by Angela Astle of Athena Project Arts and peopled by a diverse group of women doing great things in the combined worlds of commerce and culture. Guests range from Denver Center for the Performing Arts CEO Janice Sinden to artivist/performer Bianca Mikahn; gather at Walker Fine Art, 300 West 11th Avenue, Unit A, on Thursday, January 25, from 5 to 7 p.m. Find info and tickets, $20 to $35, on the event's Facebook page.