What group sometimes gets lost in all the activity of Denver Comic Con? Our fine local corps of cartoonists, graphic novelists and comic artists, a talented bunch that will have a presence at the con but sometimes finds it hard to compete with big-time special guests and rampant cosplayers. Just in time, the Denver Public Library is giving the locals a lift with the release of its own Denver Comix, a twelve-page, full-color paean to homegrown talent, featuring 24 original strips. Get your free copy and enjoy a live podcast by MotherF**ker in a Cape, refreshments and a Doodle Fight drawing competition at a post-con party from 7 to 10 p.m. Friday, June 30, at Mutiny Information Cafe, 2 South Broadway. Visit the Facebook event page for details.

Gamers and classical-music aficionados will enjoy a rare confluence of interests this weekend at the Colorado Symphony’s performances of The Legend of Zelda: Symphony of the Goddesses. Aside from entertaining three successive generations of children and adults alike, The Legend of Zelda includes some of gaming’s best music; arranged by Chad Seiter, the symphony’s overture combines the most memorable melodies from the game into a grand symphonic experience that even Ganondorf could enjoy. With shows at 7:30 p.m. on Friday, June 30, and Saturday, July 1, at Boettcher Concert Hall in the Denver Performing Arts Complex, this is the perfect opportunity to link up with other gamers and pay homage to the Golden Goddesses. Visit zelda-symphony.com to learn more and buy tickets, $15 to $89.

The first annual Colorado Prairie Music Festival will have the rafters ringing at the Old Limon Salebarn, 1255 Dairy Lane in Limon on Friday, June 30, when former Coloradan Braydon Zink will open for the Turnpike Troubadours. But that’s just the start of the action in Lincoln County: The next morning, Limon will host a 5K Star Spangled Fun Run, followed by a horseshoe tournament at Railroad Park and free admission to the Limon Heritage Museum from 1 to 8 p.m. Back at the barn, the Eastern Colorado Veterans Memorial Benefit Concert will offer beer, barbecue and bluegrass music from Smoke, Sway Grass and Zink himself from 11 a.m. to 6 p.m.; after that, the action moves to Gaskill Football Field for the 101st Army rock, Dixieland and country bands and the biggest fireworks show in eastern Colorado. Tickets are $30 for the June 30 concert or $40 for a weekend pass; admission to the July 1 evening concert is free. For more information, go to seelincolncounty.com.

It’s been more than twenty years since Denver’s Historic Elitch Theatre hosted live music. But that’s about to change: The storied venue, where the likes of Grace Kelly, Cecil B. DeMille and Ray Charles once performed, is throwing open the doors for a concert on Saturday, July 1, to benefit the Sunnyside Music Festival, which takes place in September. Singer Alyssa Michelle, Sweet Lillies and the All-Star String Band will entertain visitors to the 126-year-old theater with a mix of bluegrass, folk and Americana. Attendees can also sip cocktails and peruse food trucks while they enjoy the festivities, which start at 6 p.m. The Elitch Theatre is at 4655 West 37th Avenue; tickets are $15 online and $20 at the door (children five and under get in free). Go to sunnysidemusicfest.org/events for more information. 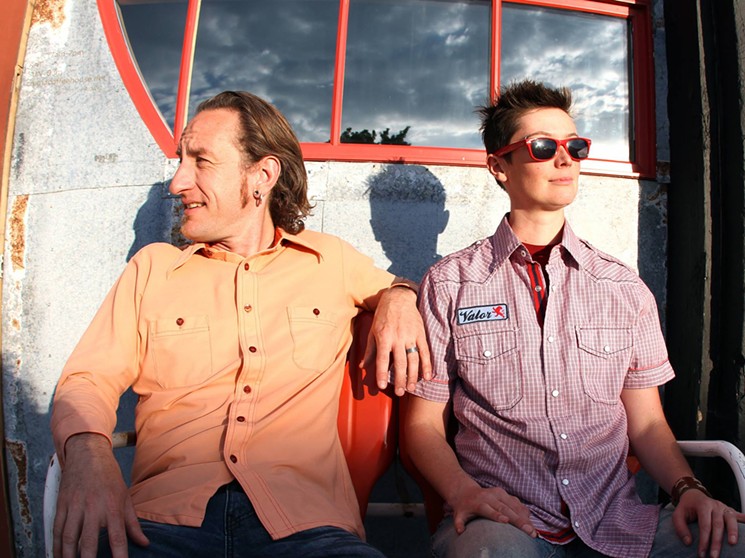 Gary Grundei and Amy Shelley will host High Fiction Variety Night.
Courtesy of High Fiction
A little bit of everything is what you’ll get when the offbeat, versatile and theatrical musical duo of Gary Grundei and Amy Shelley host High Fiction Variety Night, which they promise might include “guest artists, burlesque, Fictional Karaoke, original music, contests, or something that’s not even been invented yet.” The mystery will be revealed during the event, which runs from 8 to 10:30 p.m. on Saturday, July 1, at Still Cellars, 1115 Colorado Avenue in Longmont; the evening will include special cocktails created by Still’s proprietor/drink-inventing team of Jason Houston and Sadye Rose. For tickets, $12, go to stillcellars.com.

When Doran Joseph founded Menagerie Family, a Denver-based art-and-entertainment company, he was staying on couches and had no cell phone. Still, with help from friends and family members, he began throwing the Monday Night Menagerie at Cervantes’, putting the spotlight on DJs, visual arts, poetry and more, showcasing groups like the Motet, Lettuce and the Phil Lesh Band. For its second-anniversary party, Menagerie will move the fun to Saturday, July 1, with a lineup that starts at 9 p.m. and includes Wabakinoset, Theoretically, Moonlight Bloom, High Voltage Silent Disco and Jew Tang Clan, all at Cervantes’, 2635 Welton Street. Tickets are $10 in advance and $15 at the door; for more information, go to cervantesmasterpiece.com.

Denver rock band Rubedo will hosts its third annual Independence Day show at the Bluebird Theater, 3317 East Colfax Avenue, on Saturday, July 1. For this round, the musicians have recruited two Denver-based Chicano bands, Los Mocochetes and Baubo, which will be joining forces in a one-night collaboration: Los Mocochetes con Baubo. Also on board are Don Chicharron, an eleven-piece chicha band; Phoenix rapper Mouse Powell; and the Nashville-based Luke Krutzke and the High Tides. And Rubedo will break out songs from its soon-to-be-released third album, Vaca. The show starts at 8 p.m.; tickets are $5 to $16. For more information, go to bluebirdtheater.net.

Denver comedy fans who see their favorite comics perform over and over learn not only their jokes, but also their tics and idiosyncrasies. Sexpot Comedy’s Designated Drunkard: A Comedy Drinking Game has turned these observations into a rib-tickling and liver-pickling standup showcase. Co-produced by two open-mic hosts — Caitie Hannan and Byron Graham, who’ve both watched an inadvisable amount of local comedy — the format is fairly simple: Hannan and Graham write down their notes about each comic on a large easel pad and prompt the audience to drink each time the comic on stage says or does something on the list. Throughout the show, one of the hosts remains on stage to serve as Designated Drunkard to guide the audience and generally make a drunken spectacle of him- or herself. Inspired by “Wait, What?” a similarly boozy brouhaha run by New Orleans comics Geoffrey Gauchet and Isaac Kozell, few shows achieve the same level of bacchanalian abandon. On Saturday, July 1, the lineup will include Bay Allison Mick and Aviva Siegel alongside local favorites Olivia Schyling, Jacob Rupp, Zeke Herrera and Harris Alterman; it’s headlined by the hilarious Aaron Urist. Get in the game starting at 7 p.m. at El Charrito’s Comedy RoomRoom, 2100 Larimer Street; tickets are $5 at nightout.com.

The Denver comedy scene loves nothing more than seeing one of its own succeed, and over the past few weeks, former hometown boy Chris Charpentier has had locals swelling with pride. On June 20, Charpentier smashed his late-night debut with a well-honed set on Jimmy Kimmel Live!, while his friends and fans organized viewing parties all over the city to celebrate. Charpentier, who’s also appeared on Uproarious, Flophouse and Those Who Can’t, will reach another career milestone this week with a pair of headlining engagements at his home club, the downtown Comedy Works, 1226 15th Street. Catch him at 7 p.m. Sunday, July 2, or 8 p.m. Wednesday, July 5; go to comedyworks.com to learn more and buy tickets, $14.

When the Fourth of July rolls around, it’s hard to avoid fireworks shows, which light up the sky for miles. And who wants to avoid them, anyway (dogs excepted)? But for urbanites who can’t wait to have a blast, Independence Eve 2017, starting at 8 p.m. Monday, July 3, at Civic Center Park, is the way to go. This year’s eighth annual celebration gets rocking with party band Soul X before giving way to the pomp and circumstance of the 101st Army Band of the Colorado National Guard. For convenience’s sake, there will be food trucks on hand, although you’re free to bring your own eats, too. You’ll definitely want to bring your own seating and arrive early to grab a good spot for the show and the fireworks that top off the night. That’s entertainment! Admission is free; learn more at civiccenterconservancy.org.

This year, relocate your Independence Day celebration from the back yard to Union Station, 1701 Wynkoop Street, for the Stars & Stripes Express Fest, which runs from 11 a.m. to 7 p.m. on Monday, July 3, and Tuesday, July 4. The Terminal Beer will double the size of its patio to fit more revelers, and Denver Beer Co. will be pouring lots of locally made suds; there will also be plenty of live music and family-friendly entertainment. Stars & Stripes is a free event (but the beer isn’t), and it will end early enough for you to catch a local fireworks display.