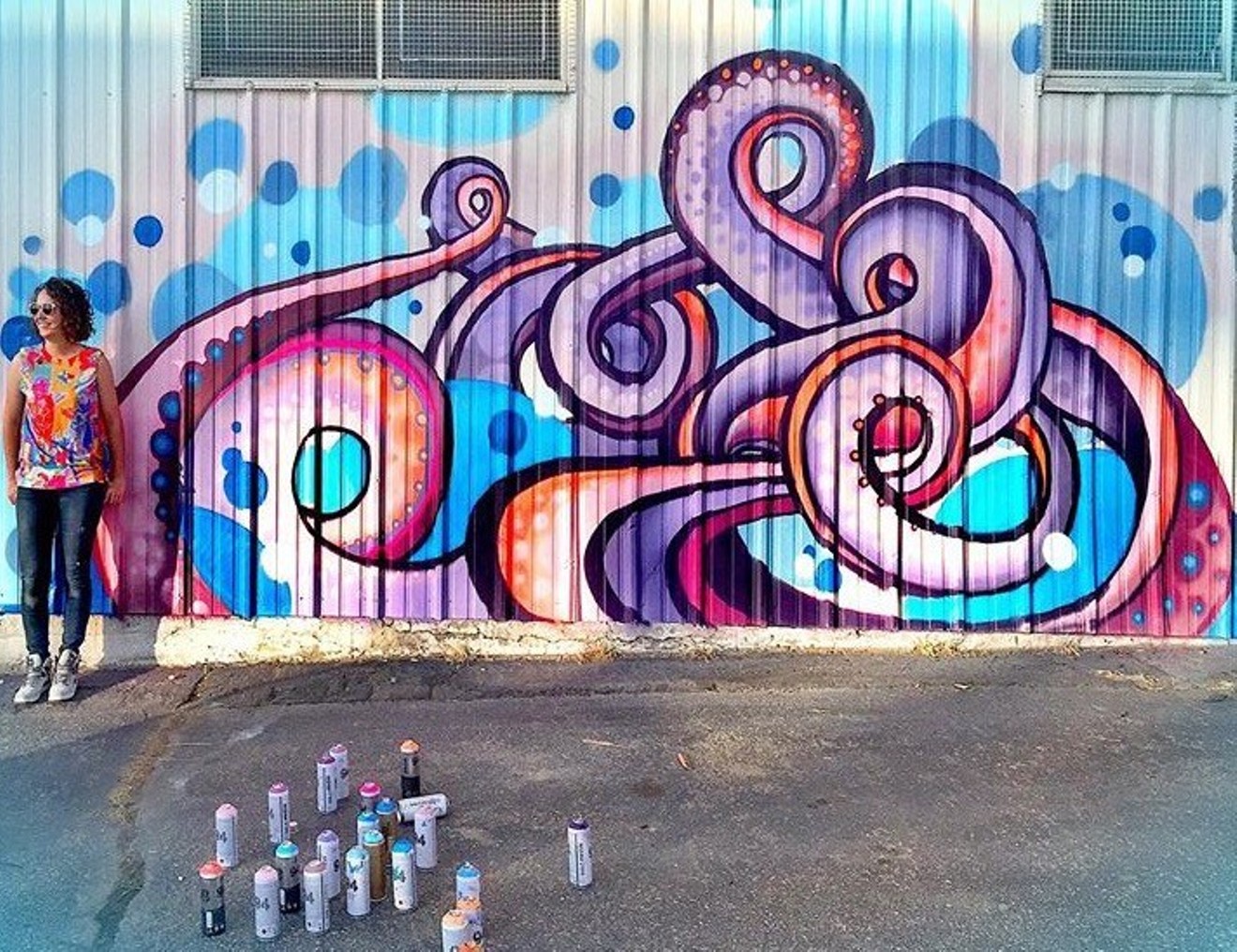 CRUSH returns in RiNo! Anna Charney
This week marks the end and beginning of a few things in Denver. Film on the Rocks bows out on Monday, September 11, with a screening of Twister, and the CRUSH Festival returns to RiNo on the same day. Find more on those events and more in our 21 best events of the week.

Take one part Arthurian legend, two parts Star Wars, a whole lot of Lord of the Rings and a smidge of Liam Neeson, mash ’em all together and you’ve got 1983’s delightfully cheese-tastic sci-fi fantasy film Krull. “It’s an homage to Star Wars — that’s putting it generously — which of course features a princess in need of rescuing and a motley crew of adventurers who save her from alien invaders,” says Bridget Kiley, Young Services librarian from the Koelbel Library in Centennial. The library, at 5955 South Holly Street, will screen the film at 7 p.m. on Tuesday, September 5, as a part of its Bad Movie Night series. Best of all, the screening is free (which is just slightly less than what the production company spent on sets and special effects). Fun snacks will be provided along with a special pre-show beginning at 6:30 p.m. The evening is recommended for those 18+, and seating is limited. Make your reservations at arapahoelibraries.org/location/koelbel-events.

The Denver Food + Wine Festival kicks off on Tuesday, September 5, and runs through Sunday, September 10, so if you’re considering hitting any of the events this year, it’s time to get moving. Tickets are on sale now, and depending on what whets your appetite, they’ll set you back a very reasonable $40 to a steep $195 — and there’s even a VIP Grand Tasting ticket available for $250 if you want to go all in. Kick off the festival week with the Culinary Cinema Series, which will screen the documentary Barbecue on Tuesday, September 5, at 7 p.m. at the Sie FilmCenter, 2510 East Colfax Avenue. The movie is sure to make your mouth water, which won’t be a problem, as the $40 ticket includes bites from Hearth & Dram, Rolling Smoke Bar-B-Que and the Nickel; drinks will be available for purchase at the theater’s bar. Snag tickets and find the rest of the festival’s schedule at denverfoodandwine.com.

Short on cash and looking for something laid-back to do on a Wednesday night? Punch Drunk Press’s new Punch Drunk Showcase is a variety show blending poetry readings, comedy routines, music and magic in a single evening, all for a $5 donation at the door, at Mutiny Information Cafe, 2 South Broadway. Drop in on Wednesday, September 6, from 7 to 10 p.m.; Colorado Springs playwright and poet Idris Goodwin and standups Timmi Lasley and Steve Vanderploeg are just a few of the acts you’ll hear from. Plus, you’ll have all of Mutiny at your disposal for book- and record-browsing, coffee-drinking and general hanging out. Get more info on the Facebook event page.

There’s magic in the air at Union Station, but you’ll have to go underground to find it: Canadian magician Tyler Wilson will be bringing his show Lies Wide Open to the venue’s lower-level gallery for an intimate, up-close evening of modern prestidigitation, comedy and grown-up entertainment that’s a far cry from pulling a rabbit out of a hat. Wilson performs Wednesday, September 6, at 8 p.m. at Union Station, 1701 Wynkoop Street; tickets, of which there will be precious few, are $50 and $75 at tylerwilson.wellattended.com.

West Highland is one of Denver’s top neighborhoods for dining out, with restaurants lining West 32nd Avenue offering a broad variety of taquerias, noodle bars, small-plates kitchens, pizza parlors and more. With so much to choose from, trying everything can be a daunting proposition — unless you can cover them all in one night. That’s what you’ll be able to accomplish at the fifth annual Taste of Highlands on Thursday, September 7. From 6 to 9 p.m., stroll the streets at West 32nd and Lowell Boulevard (don’t worry, cars will be off-limits for the evening) and taste samples from more than twenty food vendors representing the surrounding neighborhood. While you’re there, enjoy live music and drinks from the beverage garden (like a beer garden, only with more variety). Get all the details and purchase tickets, $40 to $60, at tasteofhighlands.com.

If your ears perk up at the mention of a puppet opera performed in a bar, director Aaron Vega and his newly formed People’s Theatre of Denver have you covered. The troupe lifts off this week at Syntax Physic Opera with two performances of Death Goes on Strike, a dark, allegorical one-act opera inspired by composer and Holocaust victim Victor Ullmann’s Der Kaiser von Atlantis — a work not heard by an audience until more than thirty years after Ullmann’s death in the gas chambers at Auschwitz. Vega teamed up with the Zoot Theatre Company, a sophisticated puppet theater out of Dayton, Ohio, to reimagine the story, in which the Grim Reaper, overworked by war and mounting deaths, goes on strike. They’ll bring it to Syntax, 554 South Broadway, at 7 p.m. on Thursday, September 7, and Friday, September 8. Admission is $10 in advance at dgos.brownpapertickets.com or $15 at the door; learn more at peoplestheatredenver.org.

Get to know self-taught architect Charles Deaton at the MOA.
Courtesy of Nicholas Antonopoulos
Self-taught architect Charles Deaton is best known in these parts for the space-age landmark “Sculptured House” (aka the Sleeper house, in reference to its appearance in the 1973 Woody Allen comedy of the same name), which sits high on a hillside above I-70 in Genesee. But even earlier, in 1967, the designer thought outside the box to create the iconic flying-saucer-shaped bank building at 3501 South Broadway in Englewood. To celebrate that mid-mod structure’s fiftieth anniversary, the Museum of Outdoor Arts, 1000 Englewood Parkway in Englewood, will open its doors for an open-house viewing of the current exhibition, The Sculptured Buildings of Charles Deaton. The public is also invited to walk, drive or hop on Englewood’s RTD circulator shuttle to go tour the bank; both locations will be open from 10 a.m. to 4 p.m. Thursday, September 7. Close the day at the MOA with ongoing Deaton architecture talks from 2 to 4 p.m. Admission is free; visit moaonline.org for information.

The Denver Food & Wine Festival is a multi-day extravaganza of food, wine and spirits, and no festival event will be more spirited than the Shakedown on Thursday, September 7, at the McNichols Building in Civic Center Park. Starting at 6:30 p.m., celebrity bartenders from the Colorado Bartenders Guild will compete to create the best cocktail while attendees listen to a special acoustic Dragondeer set, snack on appetizers, mingle with the mixologists, test the cocktails and vote for their favorites. Tickets to the event are $55, but don’t forget to save room, and cash, for the F&W Grand Tasting from 1 (noon for VIPs) to 4 p.m. Saturday, September 9, on the Pepsi Center grounds. Tickets to that eating orgy are $125 general admission, $250 VIP...or just go for a Connoisseur VIP Experience Festival Pass, which gets you into all festival events. See the full schedule and buy tickets at denverfoodandwine.com.