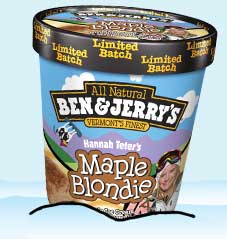 The International Olympic Committee goes hard on athletes marketing products during the games, but now that it's a wrap you'll be seeing more and more of them cashing in. We think snowboarder Hannah Teter's angle just might the sweetest:

As if that sexy spread in the Sports Illustrated Swimsuit Issue last month weren't enough, on Wednesday March 3 Ben & Jerry's shops are selling $1 scoops of Maple Blondie ice cream in honor of this year's Women's Halfpipe silver medalist. A portion of the sales benefit Teter's charity projects in Africa through World Vision, the same efforts benefitted by the Hannah's Gold maple syrup brand she launched after winning the gold in the Torino Winter Games.

"We're so proud of our favorite Maple Blondie, Hannah Teter for bringing home the silver! Let's celebrate in true Ben & Jerry's fashion -  For one day only on March 3rd (that's tomorrow, don't forget!), stop by your local participating Scoop Shop and say, "Way to go Hannah!" and you'll get a scoop of Hannah Teter's Maple Blondie for $1 - yup a buck, while supplies last! In case you forgot, it's Maple Ice Cream with a Maple Caramel Swirl and Blonde Brownie Chunks."

If you're feeling frisky after the sweet deal at Ben & Jerry's, try getting into Teter's panties: This month she's pushing "Make Love Not War" boy shorts over at SweetCheeksPanties.com ("Panties With a Purpose") to benefit Doctors Without Borders, and plans to issue a new design benefiting a different charity each month.

Teter is donating $5 of each $18 pair of sassy pants to help with the organization's ongoing efforts in Haiti, and hopes to raise $100,000 by May. That's about 20,000 pairs of panties by my math, but Teter does have a way of going big when it matters most.

KEEP WESTWORD FREE... Since we started Westword, it has been defined as the free, independent voice of Denver, and we'd like to keep it that way. With local media under siege, it's more important than ever for us to rally support behind funding our local journalism. You can help by participating in our "I Support" program, allowing us to keep offering readers access to our incisive coverage of local news, food and culture with no paywalls.
Make a one-time donation today for as little as $1.
Colin Bane
Contact: Colin Bane