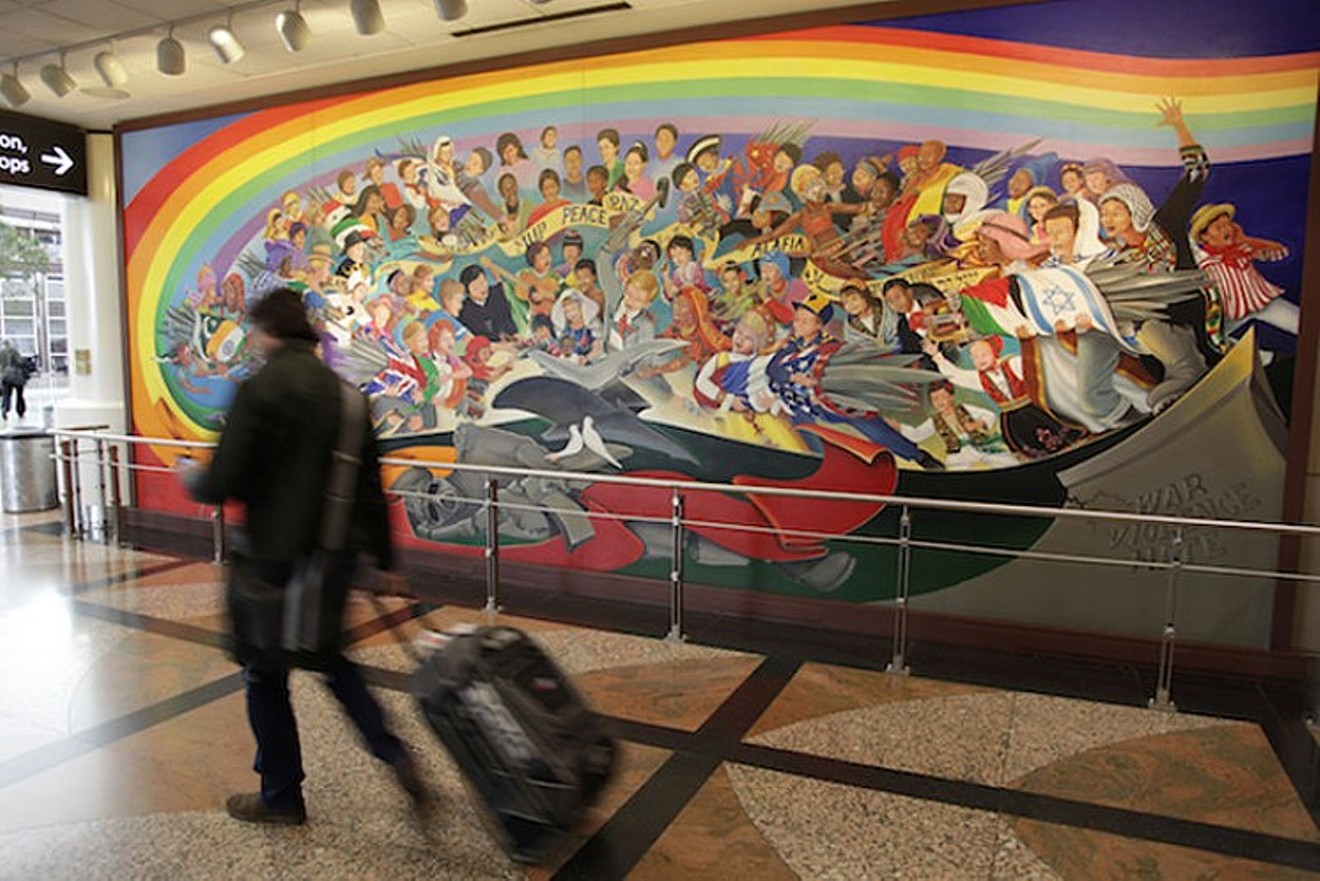 "Children of the World Dream of Peace" has been a fixture of Denver International Airport since it opened in 1995. flydenver.com
Since Denver International Airport opened 25 years ago, we have seen no evidence of the Martians that are supposed to live underground, or the secret bunker that the New World Order has constructed, or that the facility is shaped like a penis (or is that a swastika?), or that Blucifer’s evil eye is upon us. But that hasn’t prevented new conspiracy theories from popping up — and stamping them out is the very devil.

Most recently, Demolish Demonic Displays, a crew out of Jacksonville, Florida, has decided to “support positive, uplifting and wholesome art that brings out the best in our communities” and, in the process, “destroy every proud obstacle that keeps people from knowing God.” First up? Leo Tanguma’s murals at Denver International Airport, the two-part “Children of the World Dream of Peace” and “In Peace With Harmony and Nature.”

Yes, the Denver artist is once again under attack. “This has been going on for about twenty years,” sighs Tanguma when he hears that his murals are now the focus of a change.org petition to “Remove Inappropriate Art from Denver International Airport.” While people have linked his imagery to Nazis or some other secret fascist society over the years, the devil is a new one.

But John Arwood had taken note of what he considered Tanguma’s “satanic art” when he’d passed through the airport on skiing vacations. “I’d seen it for years. I’d never understood it,” says Arwood, who notes that his kids were spooked by it. Recent events made the meaning clear, though: “Everyone’s wearing a mask, almost like they’ve been preparing for the pandemic,” he explains. “But the kids aren’t wearing a mask.”

So when Arwood and his fellow demon hunters got together a couple of weeks ago to create the demolishdemonicdisplays.com hit list, Tanguma’s work was moved to the top. “There’s a lot of demonic stuff that’s secretly getting put out there,” Arwood says. “The question is why? The guy must have had a vision.” 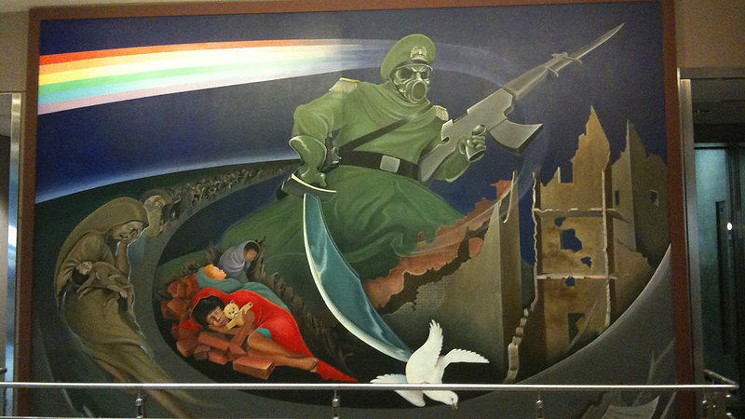 The portion of "Children of the World" on the change.org petition.
change.org
Tanguma had a vision, all right. “The most recurrent theme in my numerous murals over the years has been the struggle for human liberation and human dignity,” he explained in “Regarding the DIA Conspiracy Theories,” a piece he wrote for a now-defunct Christian website when those theories first surfaced. “My work has been totally open in the midst of many people, accessible to everyone.”

Particularly the hundreds of thousands of people who’d pass by the murals as they hurried through the airport, until “Children of the World Dream of Peace” was temporarily removed for that delayed, over-budget terminal renovation project at DIA. (Talk about bedeviled!) The change.org petition requests that it not be returned to a public space, since it “prominently features death and violence.” And “In Peace With Harmony and Nature” can go, too, since it “features disturbing imagery that is not appropriate for mass consumption.”

According to Tanguma, “Children of the World Dream of Peace” is actually an indictment of war; a child dreams of peace while children of the world bring swords to be beaten into plowshares. “In Peace With Harmony and Nature” focuses on the environment: “Humanity, represented by multi-racial children, is shocked and saddened at finding our natural world in a trampled and abused state,” notes the start of an explanation that Tanguma plans to add to his website. “In the immediate foreground are three concrete coffins, each containing a young girl clutching cultural articles. These three girls symbolize our own humanity as victims of our self-destruction, notably through war, slavery, genocide, exploitation and violence of all kinds.”

But even though his focus on peace, justice and the environment are common themes in all of his work, Tanguma has found himself having to explain his airport murals, and has even lost jobs because of the conspiracy theories. “It’s been like a slap in the face,” he says.

That slap came as a surprise, since Tanguma had found only a warm welcome in Denver after he moved here in 1983 from Houston, where he’d done some of the early, prominent murals of the Hispanic movement. “We did enormous things, and the response of the community was almost mystical,” he recalls. “Especially in the ethnic communities for many years, murals were the only way we had to express our culture and our point of view.”

From his Denver base, he went on to do many more paintings and murals, in addition to the 1995 airport commission he painted with two assistants: his daughter Leticia Tanguma and friend Cheryl Detweiler. His work was featured in the recent Para Mi Pueblo: Chicano/a Muralists of Colorado, an exhibit at the McNichols Building, and is included in the current Hecho en Colorado at History Colorado, where he spoke last fall. He’s now writing a book about his life and his art, and working with young muralists to encourage their efforts.

Which is why he finds the demolishdemonicdisplays.com campaign discouraging, another slap in the face. He’s written to change.org regarding the petition, but has not yet heard back from the online company or from Arwood’s group, which had collected a whopping 178 signatures on its Tanguma petition by early August 17.

But it’s not giving up. Next on the agenda: getting Devils Tower in Wyoming renamed. “You see everything going on around America, trying to do away with history, you don’t see anybody getting aggressive about doing away with demonic-type stuff,” Arwood notes. “A lot of these conspiracy things out there are coming into reality.” 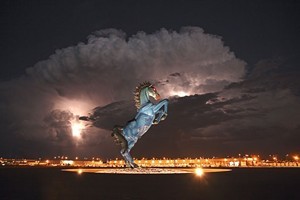 \It’s going to take a lot more than a change.org petition to persuade the Denver Commission on Cultural Affairs to remove Tanguma’s murals from the airport. The city has a long, detailed process that must be followed before it will even consider decommissioning a piece. An attempt to remove “Mustang,” Luis Jiménez’s devilish blue horse, got tangled in those guidelines a half-dozen years ago, and efforts to censor Tanguma’s work are even less likely to meet with success.

Artists are now following in the footsteps of icons like Tanguma, creating murals of “so many beautiful heroes in culture that can be shown to young people and communities,” he says. “It’s heartwarming. That’s why I became an artist. I’ve seen the impact they can have.”

The devil is in the details.
KEEP WESTWORD FREE... Since we started Westword, it has been defined as the free, independent voice of Denver, and we'd like to keep it that way. With local media under siege, it's more important than ever for us to rally support behind funding our local journalism. You can help by participating in our "I Support" program, allowing us to keep offering readers access to our incisive coverage of local news, food and culture with no paywalls.
Make a one-time donation today for as little as $1.