The State of Murals: Take a Trip Through Colorado Street Art 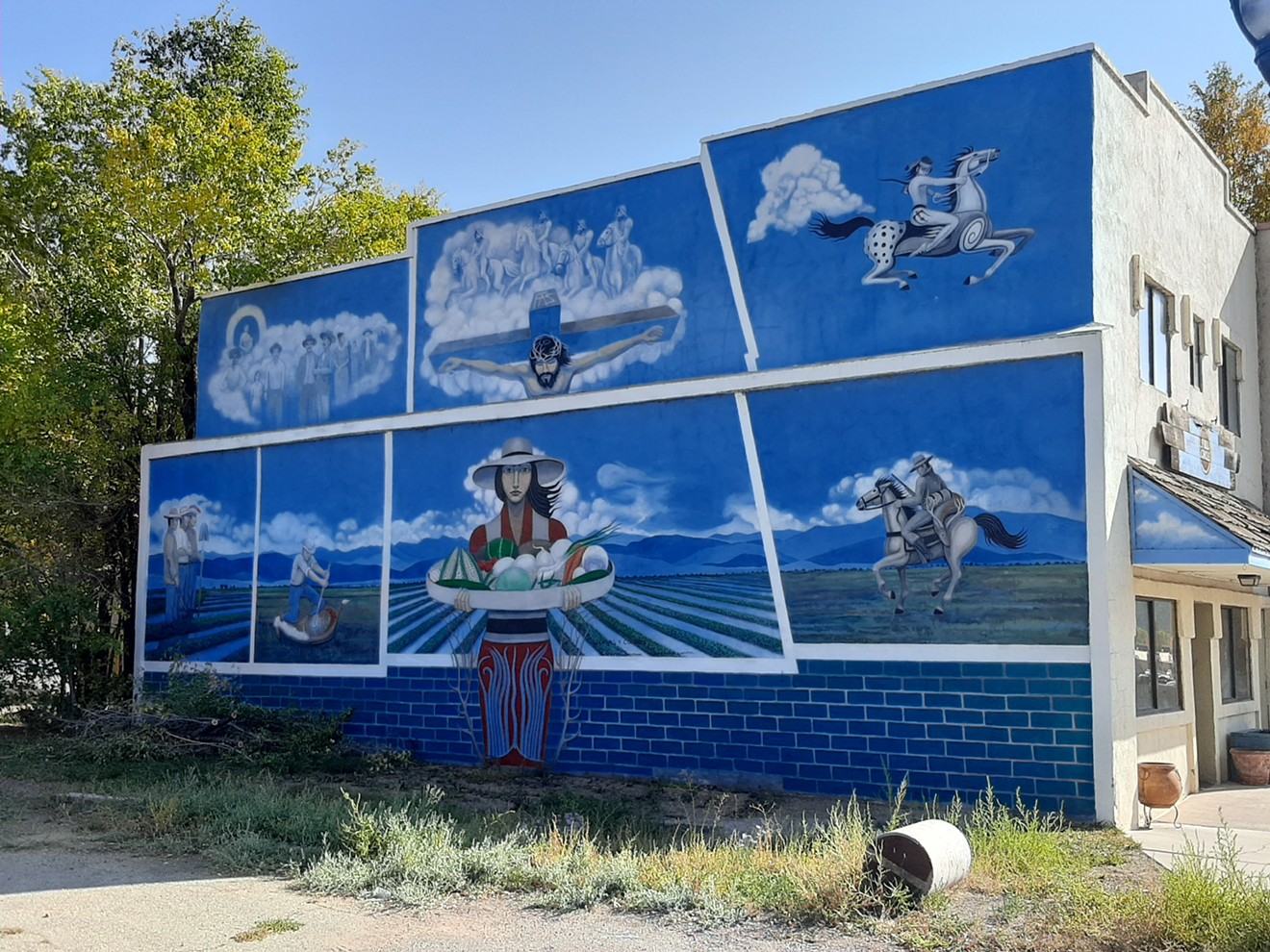 "Sierras y Colores," by Carlos Sandoval. Colorado Creative Industries
While many art forms have hit a dead end during the pandemic, murals have continued to spread across Colorado. But if you want to venture out to see street-art paintings past and present, good luck: It's not easy to track them down — much less trace their historic roots.

There's no map or guidebook that tells the story of the art on walls and buildings around the state. No cultural institution preserves its history, either. Not History Colorado. Not the Western History Collection at the Denver Public Library. Not the Denver Art Museum. That makes it difficult to determine what's been painted, who did it when...and why. Sometimes, the where disappears altogether.

Unlike most art objects, murals are often ephemeral by design. Paint is impermanent and fades with time and bad weather. Pieces are vandalized. Buildings are torn down and murals destroyed, or they're painted over with new work. For most of the celebrated street art in the RiNo Art District, that happens at least yearly. And even works that stay up are often not signed by their creators.

Shannon Galpin's "Say Her Name," Boulder.
Peter Kowalchuk
There have been some community-driven efforts to document the history of local murals. Denver Arts & Venues maintains an online database of the works it funds, including street art subsidized through the Urban Arts Fund, an anti-graffiti program. The Chicana/o Murals of Colorado Project has been building a database of that community’s murals across the state. But no single archive chronicles the state's mural, graffiti and street-art history, says archivist Abby Hoverstock, who oversees the Denver Public Library's Western History collection.

That may soon change, however.

As the pandemic was shutting down arts activities across the state, Margaret Hunt, head of Colorado Creative Industries, the arts agency based in the state Office of Economic Development and International Trade, noticed that murals were becoming all the rage. In late August, she and her team decided to create a database of major murals around the state — and the artists who'd painted them. It was a daunting mission for CCI's six employees, who were also tasked with managing public art projects, handing out emergency grants, and helping the entire cultural sector weather the pandemic.

Leading the effort is CCI administration and partnerships director Ruth Wilson, who oversees the Art in Public Places initiative, which commissions public works inside and outside state buildings. With so many competing priorities and no full-time staff dedicated to the project, Wilson acknowledges that the work is slow and has yet to result in the kind of archive she hopes to one day create.

Since there's no comprehensive record of what murals exist around the state, Wilson and her colleagues started from scratch, asking for information from the 26 official Colorado Creative Districts, business hubs where galleries, artist studios and other creative endeavors help boost local economies. Photos of historic and contemporary works soon poured in.

Jiacuy Roche's "Afro Flower Lady"
Visit Aurora
Overwhelmed, Wilson hired Sharifa Moore with funds from the agency's administration budget to review submissions. Moore is a seasoned photographer and curator who honed her skills at the Center for the Arts in Evergreen and the Emmanuel Gallery on the Auraria campus; she's currently the deputy director of Denver Digerati. She's also a graduate student at the University of Colorado Denver studying the humanities with an eye toward situating contemporary art within cultural histories, and she took on the project as an internship.

Unable to travel the state because of COVID-19 restrictions, Moore began sifting through the hundreds of photos submitted of murals new and old, some dating back to the late 1920s and ’30s. Some were painted in cities, others in rural towns. “There’s a lot out in the rural areas that are not very well maintained,” Moore says. “A lot of the murals in rural areas have significant damage due to age.”

During the ongoing research, Wilson says, Colorado Creative Industries has been asked for funds to help restore murals. Because of its limited budget, that’s not possible — though the agency is able to help communities find money to do it themselves.

In fact, CCI has gotten very creative in pairing arts with the economy, which is why Hunt reached out to the Colorado Tourism Office, which is also housed within OEDIT.

The tourism agency had been struggling to find a purpose during the pandemic. Much travel has banned or limited, and even the state's most ardent boosters don't want to invite potential COVID-19 cases into the state. Instead, it began to focus on promoting Colorado culture to Coloradans. And with many cultural institutions shuttered, murals became ideal landmarks that people could safely experience.

The two state agencies came together to organize arty road-trip itineraries called Mural Trails — the street-art lover’s equivalent of leaf-peeping, now dubbed “muraling.” So far, they’ve created a four-day mural marathon of northern Colorado, a three-day trip through the San Luis Valley, and a five-day tour through the Denver area, with a focus on the RiNo Art District. More will be announced in the months to come.

The San Luis Valley tour starts in Walsenburg, where you can see Maria Cocchiarelli-Berger’s “Public Health Is a Puzzle,” a colorful response to a Colorado public-health assessment, as well as Yul Jorgensen’s “Code of the West,” a tribute to the Huerfano landscape and culture. In nearby La Veta, you can enjoy Eric Lunde’s collaborative surrealist mural created with local youth dubbed “The Creative Process.” 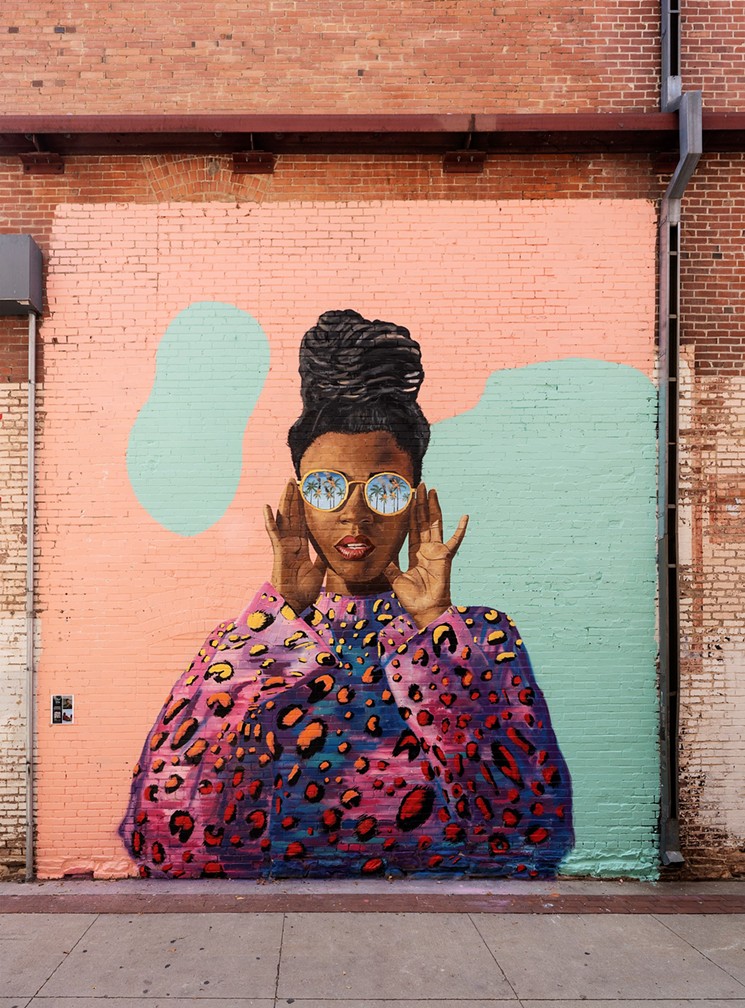 Gabriel Sanchez's "Cuban Culture," Boulder.
Peter Kowalchuk
Day two includes a visit to San Luis, where Chicano muralist Carlos Sandoval’s classic "Sierras y Colores” chronicles the long history of the state's oldest town, the role of the Ute people in the community, and the religiously driven European conquest of the region. In San Luis, you can also catch a more contemporary take on Chicano muralism: David Ocelotl Garcia’s stunning “Wild Antonito,” a look at the region’s flora and fauna. And a quick trip to La Jara takes you to landscape artist Fred Haberlein’s “Shepherd’s Sunrise.”

Day three takes you to Alamosa, where Adams State University instructor J. Noel Tucker’s “Naming of the Sangre de Cristo Mountains” offers a historic reflection on the violence of colonialism. Save time for the San Luis Valley Museum, which has 85 murals outside of the building. 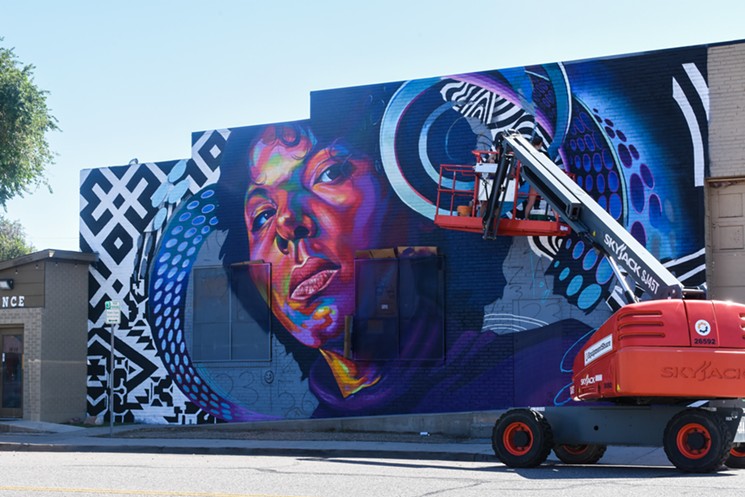 Thomas “Detour” Evans, Anna Charney and A.L. Grime painted immigrant "Lucia Escalate" in Aurora.
Photo by Visit Aurora
According to Cathy Ritter, head of the Colorado Tourism Office, the itineraries reflect not only the long, rich history of murals in the state, but also the way in which today's artists are using street art to comment on the very unusual times they're living through.

That’s particularly true of the Northern Colorado tour, which includes "Colorful Community," a paean to Lafayette’s diversity by Jaime Molina and Pedro Barrios; a trio of murals behind the Boulder Theater that ranges from Shannon Galpin’s "Say Her Name" to Gabriel Sanchez’s "Cuban Culture" and Gregg Deal’s "MMIWG2S,” from the 2020 ARTivism Mural Festival; and works by Detour, Adri Norris and more.

During the pandemic and the re-energized racial-justice movement, artists have used walls across the state to take on the biggest issues of the day, and the Colorado Tourism Office does not flinch from their social and political messages. 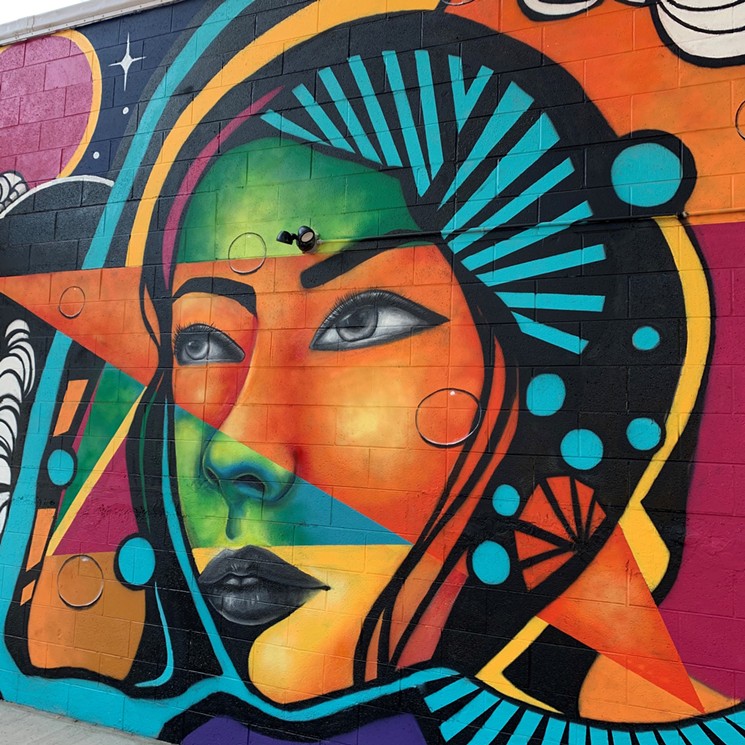 Corinne Trujillo and Aiko Szymczak (KocoCollab), "Horizon Line," Fort Collins.
Downtown Fort Collins Creative District/Peggy Lyle
“We’ve seen this explosion of murals and outdoor art in this time, which is so exciting,” Ritter says. “This has been such a tumultuous time. Artists are finding this is a way to express their attitudes and emotions, a way of expressing what’s happening in this world. We’re providing visitors and residents alike with a turnkey way of experiencing it.”

And, as Ritter acknowledges, encouraging safe, socially distanced mural tourism will not only engage people in conversations about race and culture, but it will also give a boost to the state’s hurting local businesses. 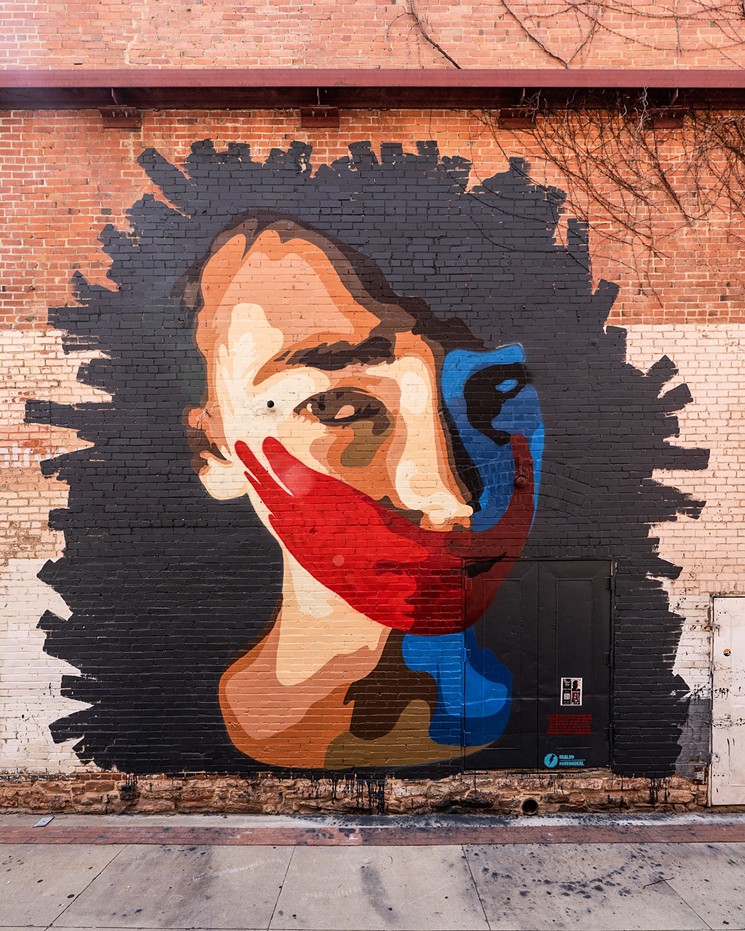 Gregg Deal's "MMIWG2S," Boulder.
Peter Kowalchuk
“Tourism is that rapid form of economic development,” she says. “It’s adrenaline for the economy. You don’t have to build anything or finance anything; the infrastructure is there. All we have to do is get people to show up, and the spending starts happening immediately, and the revitalization of the economy is immediate. These mural trails are one component of that strategy — to even now find a reason to travel, visit restaurants, stay in hotels and start helping our economy.” 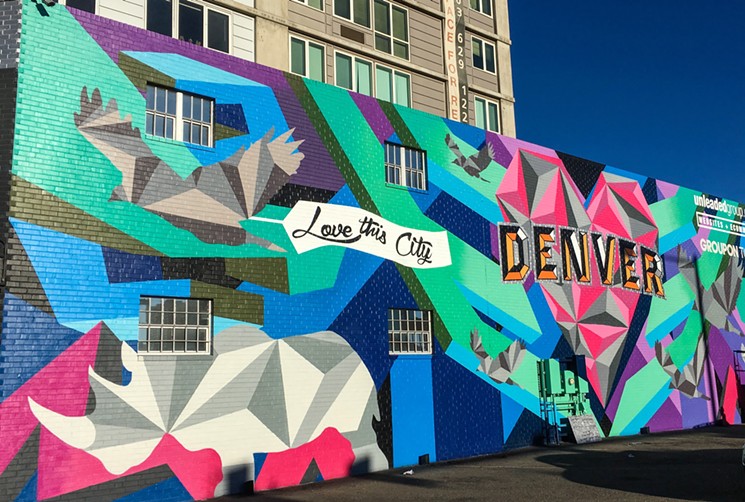 Pat Milbery's "Love This City."
Visit Denver
While road trips are the state’s current focus, they aren’t the final destination for this Colorado Creative Industries project. The mural archive is memorializing an ever-shifting art history.

Ultimately, Wilson and Moore hope that these public works will be chronicled in a comprehensive database and map that people can use to understand the story of muralism in Colorado, whether they're exploring virtually or in person.

“Our long-term goal is a database or map of statewide murals,” Wilson explains. “When I say long-term goal, the complication of any time you have a database is sorting out how it can stay live without too much maintenance. Murals change out. How we can accurately aggregate all the murals around the state in a way that will stay relevant?”
KEEP WESTWORD FREE... Since we started Westword, it has been defined as the free, independent voice of Denver, and we'd like to keep it that way. With local media under siege, it's more important than ever for us to rally support behind funding our local journalism. You can help by participating in our "I Support" program, allowing us to keep offering readers access to our incisive coverage of local news, food and culture with no paywalls.
Make a one-time donation today for as little as $1.