Review: The Humans Makes for an Unsatisfying Night at Curious Theatre Company 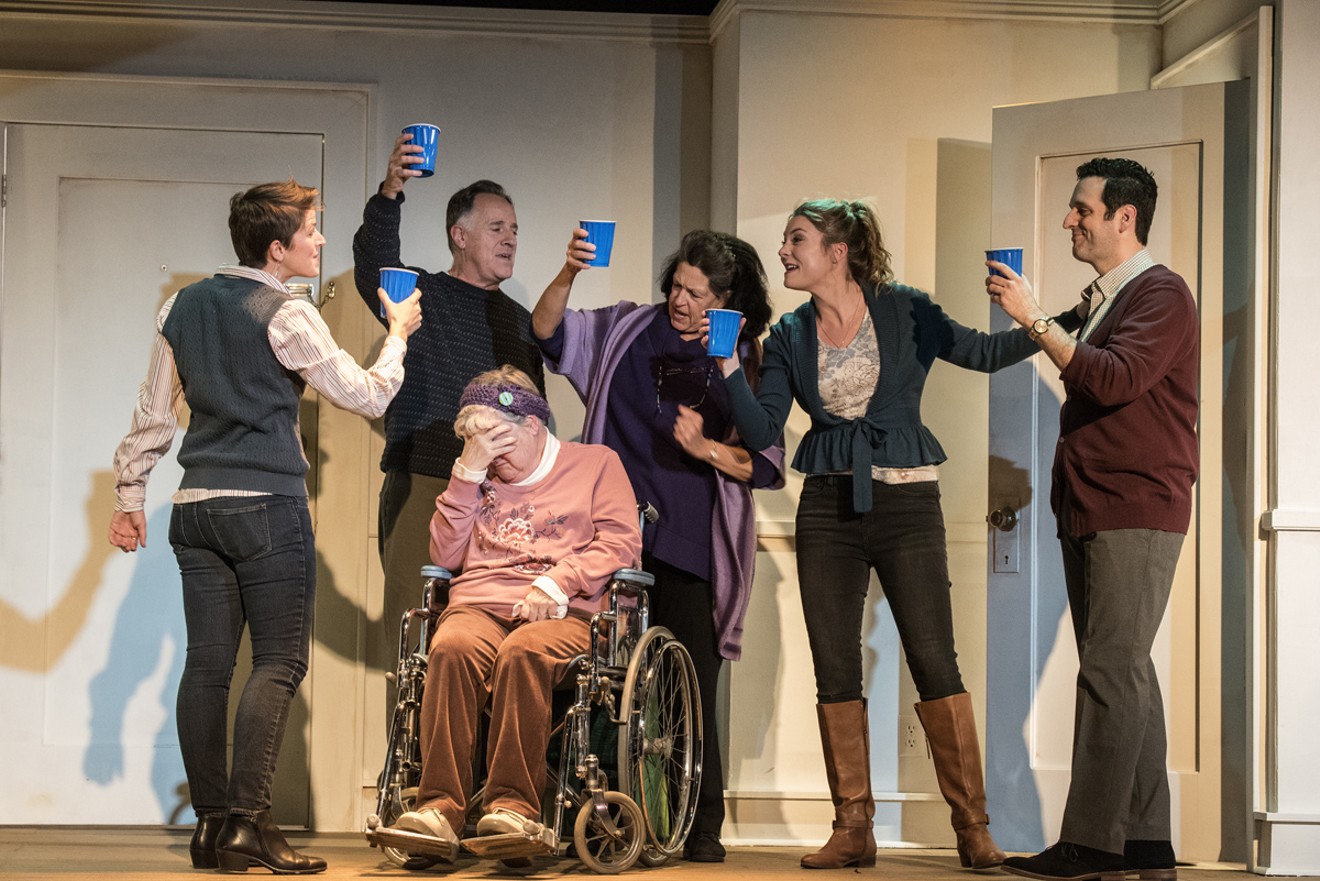 The cast of The Humans at Curious Theatre Company. Michael Ensminger
Stephen Karam’s The Humans won a Tony, was a finalist for the Pulitzer and earned glowing reviews from critics — though I’m not sure why. Now in a regional premiere at Curious Theatre Company, the play tells the story of a Thanksgiving dinner — a familiar setting, but one still capable of producing surprising and original work: A family comes home for the holidays and displays moments of closeness and humor, but tension vibrates beneath the determined cheer, and eventually there’s a revelation.

In this case, the family is meeting at the Manhattan Chinatown apartment of Brigid and Rich, the boyfriend that Brigid’s mother, Deirdre, thinks she should marry. In addition to the couple, the group consists of Deirdre and paterfamilias Erik; Brigid’s sister, Aimee; and Momo, Erik’s mother, who suffers from dementia. Head drooping, confined to a wheelchair, Momo warns us early in the evening, “You can never come back. You can never come back.” Her words are prophetic.

Everyone has a secret, everyone is worried, and most of these worries are exacerbated or caused by economic insecurity. No one wants to put Momo in a nursing home, but caring for her at home is increasingly difficult, and home care costs a hundred dollars a day. Aimee suffers from a chronic ailment and has lost her job at a law firm because of the time she’s had to take off work; she’s also grieving the loss of her relationship with her partner. Brigid and Rich are struggling with student loans. She works as a bartender while he’s getting his master’s degree in social work, but he’ll be coming into some money in a couple of years, and perhaps that will solve their problems.

These people appear to genuinely love one another, and real tenderness throbs beneath their attempts to conceal their fears and their frequent sniping. Irish-American Erik, who worked for years as a high school equipment manager, is bewildered by Brigid’s devotion to organic food and colorful chard salads and her insistence that she needs therapy for depression. If she has money problems, he reasons, why is she wasting money on such frivolity? As for depression — if such a thing even really exists — the antidote is the Catholic faith. Deirdre frets about the arthritic knees that make it hard for her to descend stairs and remind her constantly that Momo’s sad condition may not be too far off in her own future.

Despite a promising setup, these characters never come to life; I couldn’t figure out whether the fault lay with the playwright or with Dee Covington’s direction. In a bit of a cheat, I watched some online videos of the New York version once I got home, and the dialogue seemed richer, clearer, deeper and funnier. With the exception of Kathryn Gray’s touching and convincing Momo, Kevin Hart’s strong Erik and Antonio Amadeo’s pleasant performance as Rich, the Curious actors talk too fast, with none of the pauses or hesitations that signal an emotional undertow or the myriad unspoken understandings existing within families. Despite her fast speech, there’s a vitality and humor to Anne F. Butler’s Deirdre. As Brigid, though, Anastasia Davidson feels a little flighty and unmoored throughout; Brigid might be tense and overly sunny at the evening’s beginning, but surely she’d relax into herself more as the familiar family rhythms reasserted themselves. And Davidson’s voice is so similar in tone to that of Susannah McLeod, who plays Aimee, that if you close your eyes for a few seconds, you can’t tell which of them is speaking.

Adding to the confusion, strange noises periodically jolt the apartment; lights flicker or seem unnaturally bright. And the play’s symbolic, semi-supernatural ending struck me as abrupt, superimposed and unsatisfying. This is one Thanksgiving dinner that leaves you feeling empty.

The Humans, presented by Curious Theatre Company through December 22, 1080 Acoma Street, 303-623-0524, curioustheatre.org.
KEEP WESTWORD FREE... Since we started Westword, it has been defined as the free, independent voice of Denver, and we'd like to keep it that way. With local media under siege, it's more important than ever for us to rally support behind funding our local journalism. You can help by participating in our "I Support" program, allowing us to keep offering readers access to our incisive coverage of local news, food and culture with no paywalls.
Make a one-time donation today for as little as $1.