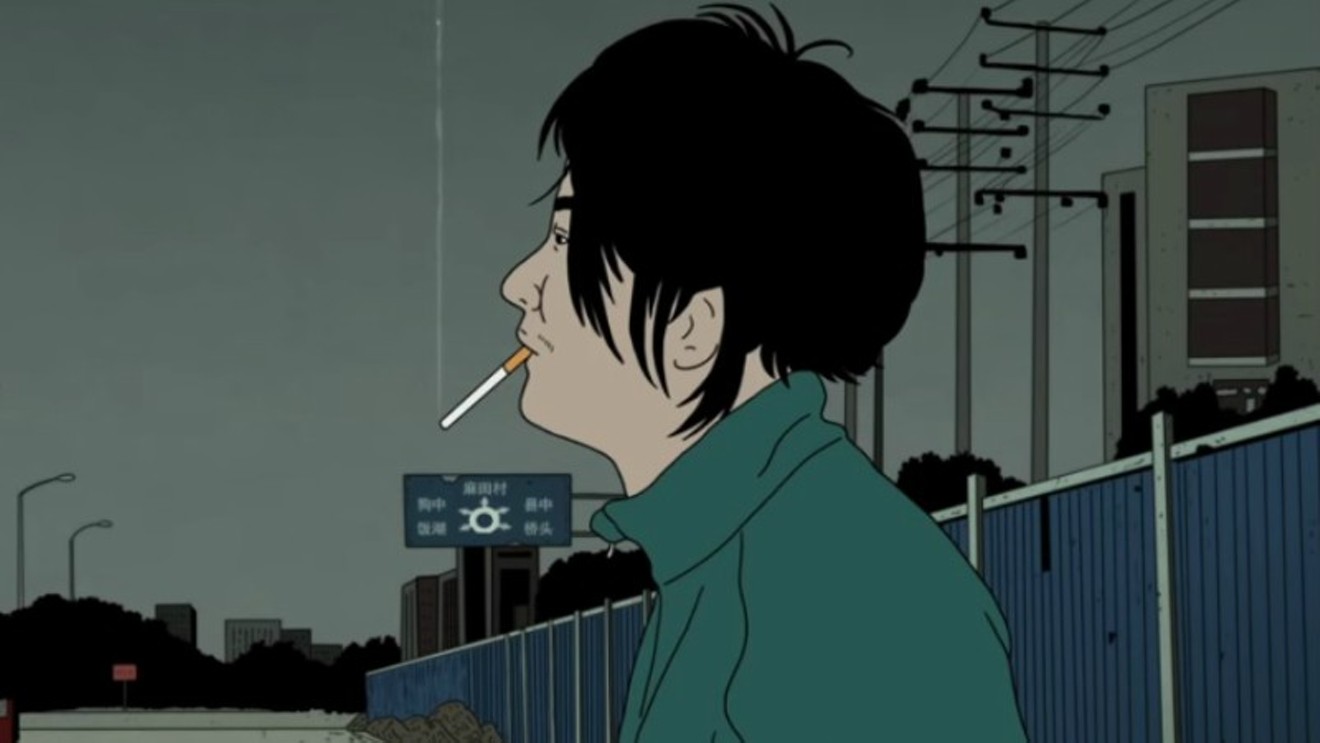 An image from Have a Nice Day. YouTube
Again this year, Denver Film Festival artistic director Brit Withey is offering his must-see picks for each day of the fest — including many flicks that movie lovers might otherwise miss amid the flood of silver-screen goodies. Today he spotlights selections for November 3, 4 and 5: Have a Nice Day, Vigilante and Strad Style.

Have a Nice Day
Directed by Liu Jian
9:15 p.m. Friday, November 3, 6:45 p.m. Sunday, November 5, 3:45 p.m. Monday, November 6
Sie FilmCenter
"Have a Nice Day is a Chinese film that's animated but not anime — and it's animated in a very strange and wonderful style," says DFF artistic director Brit Withey. "It's kind of a flat, two-dimensional style, but it's drawn in a way that's really cool."

The narrative, meanwhile, tells "a very dark gangster/mob/caper story," Withey goes on. "A young kid steals a drug boss's money, ostensibly to give to his girlfriend to get plastic surgery. Then it becomes one person trying to get the money after another — and people get killed as a result."

Here's the trailer for Have a Nice Day:


Publicity descriptions for films don't often paint an accurate picture, but the Have a Nice Day hype crew offers an exception to this rule.

"The press kit said it was as if Tarantino made a James Bond film in the Blade Runner style — and I get why they said that," Withey says. "It's dark and bleak, and nobody comes out of it good in the end."

Be warned: This isn't kids' stuff. "I think everybody has had the opportunity to see a lot of feature-length anime work. But you don't get a lot of animated films that are this different. It's really amazing."

Vigilante: The Incredible True Story of Curtis Sliwa and The Guardian Angels
Directed by David Wexler
6:45 p.m. Friday, November 3, 3:45 p.m. Saturday, November 4, 8:45 p.m. Sunday, November 5
Sie FilmCenter
"Curtis Sliwa is a character," Withey says of the main figure in this documentary, which he calls "a film that's pretty simply put together. The majority of it is him talking and telling his story — and he's riveting."

Here's the trailer for Vigilante:


"There's some crazy stuff in there," Withey maintains. "He talks about John Gotti putting hits on him, being pulled into a taxicab and being shot multiple times: story after story after story from the beginning of the 1970s, when he wanted to start this Guardian Angels group."

The archival footage and photos in the film are first-rate, Withey allows — and as a bonus, Sliwa will actually be in Denver for the screenings. "It's going to be a fascinating Q&A," he says.

Strad Style
Directed by Stefan Avalos
4 p.m. Friday, November 3, 9:15 Saturday, November 4, 6:15 p.m. Sunday, November 5
UA Pavilions
The "Strad" in Strad Style's title "is short for 'Stradivarius,' the famous violin," Withey says. "This guy Danny Houck is a semi-self-taught violin maker who lives in this gigantic old house in Ohio. The place is run down; it doesn't have any heat, and he has no money. But he goes online and befriends this guy in Europe who's a professional, serious violin player — and he convinces him he can make a Stradivarius-style violin."


The musician for whom Houck has been asked to make the violin "has an upcoming concert and a new album coming out," Withey continues. "He's played Stradivarius violins before and he likes that sound. And the film shows us the many months of Danny trying to make this violin, which he's ill-equipped to do."

The results of his toils "are really funny, but completely charming. It's absurd to see him doing this in his house during winter when he's got no heat, no tools, none of the things he'd really need to lead you down the road to thinking he can pull this off. It's just the weirdest scenario."

How did everything turn out? Audiences will hear directly from Houck and director Stefan Avalos, who are scheduled to appear at the screenings.