Unseen for years, the 1969 queer Tokyo classic Funeral Parade of Roses has been restored and comes to Denver this month. Cinelicious Pictures
Summer movie season is coming to a theater near you. The multiplexes stock up on big, bold blockbusters, and art houses pack their schedules with specialty programming and cinematic adventures. Here, in chronological order, are the ten best film events in Denver in June. 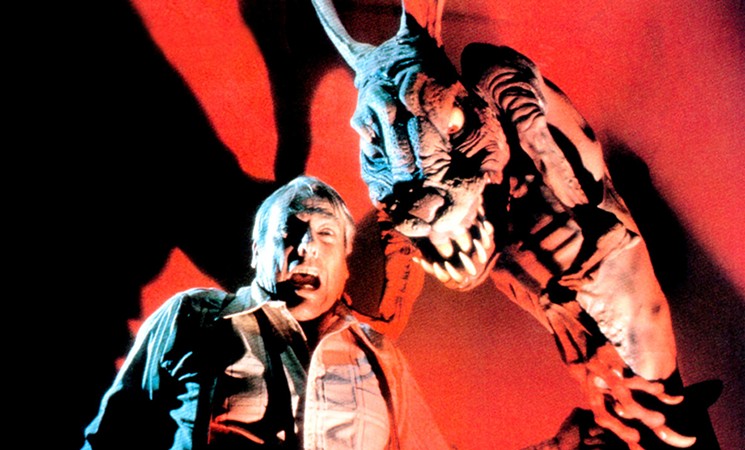 Twilight Zone: The Movie
Warner Bros.
Scream Screen: Treasury of Terror
Fridays at 9:30 p.m., starting June 2
Sie FilmCenter
Horror anthologies made up of a handful of short ghastly tales and pulled together by one creepy central theme have had audiences jumping in their seats since Tales From the Crypt, Trilogy of Terror and Creepshow. This summer, Denver’s mistress of the dark, Theresa Mercado, and her Scream Screen series are saluting scary anthologies in Treasury of Terror, which will unearth forgotten classics like Twilight Zone: The Movie, Nightmares, Stephen King’s Cat’s Eye and Tales From the Darkside: The Movie (on 35mm film!). Come early for themed giveaways and to see what wild getup Mercado is wearing for your entertainment. Get your tickets at Denver Film, and watch the trailer for Nightmares here. 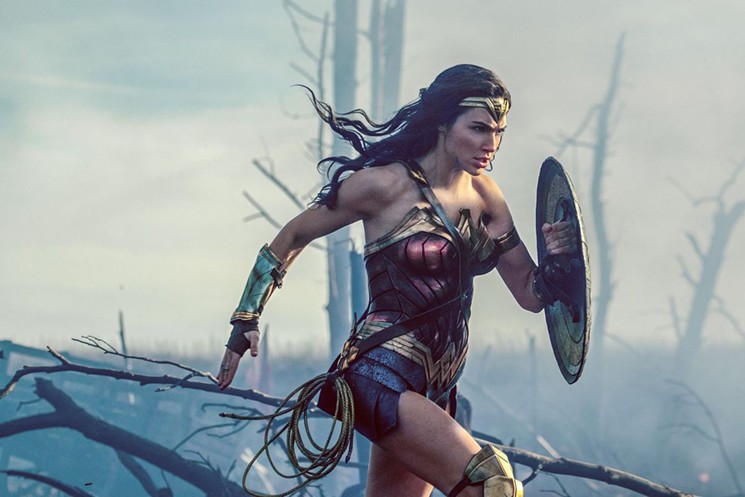 Wonder Woman
Warner Bros.
Wonder Woman
Opens June 2
Multiple Denver theaters
She’s finally arrived, everyone. Wonder Woman, the celebrated female superhero who's been blowing up the pages of DC comics since 1941, has appeared in many forms in pop culture, but never in a movie all her own – until now. Director Patty Jenkins (Monster) holds the reins, while the weight of the whole shebang falls squarely on the capable shoulders of Gal Gadot, the Israeli-born actress and model who embodies the Diana Prince/Wonder Woman of our dreams. Gadot is on par with, if not better than, the iconic Lynda Carter during her run in the ’70s TV version. In this film, an origin story, we watch Diana train on the fabled island of Themyscira, meet U.S. hero Steve Trevor and team up with him to fight Nazis during World War II. This movie juggles the battle of the sexes with humor, charm and aplomb, and the action is intense, as Wonder Woman unleashes hell on wrongdoers. Wonder Woman hits like a girl, all right, and that hit will leave you smarting for days. Find tickets and showtimes at Fandango and watch the Wonder Woman trailer here. 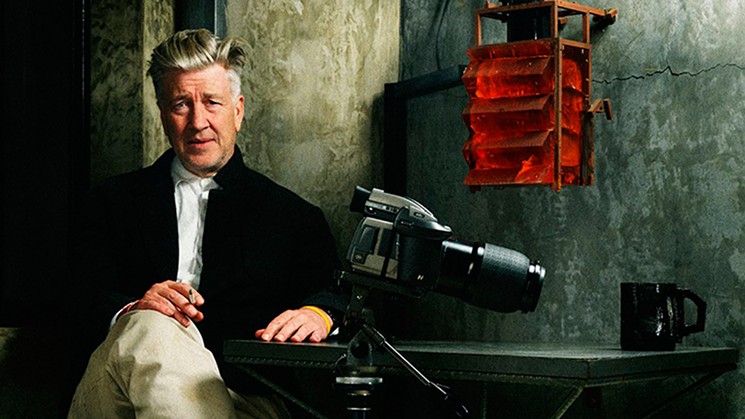 David Lynch: The Art Life
Janus Films
David Lynch: The Art Life
Opens June 2
Sie FilmCenter
As the revival of Twin Peaks has audiences once again glued to their television sets twenty years after the original series took the world by storm, now may be the time to look into the heart of the show's bizarre creator, David Lynch, whose dark, wacko style has been confusing and delighting audiences for decades. This new documentary digs deep into the dusty corners of Lynch’s mind to see whence his avant-garde themes erupted and to give us unprecedented intimate access to the filmmaker. Looking back on his movies, writings, paintings and art, we wonder if we’ll understand or go further down Lynch’s experimental rabbit hole. Get your tickets at denverfilm.org and watch the David Lynch: The Art Life trailer here.

It Comes at Night
A24
It Comes at Night
Opens June 9
Sie FilmCenter and Alamo Drafthouse
Director Trey Edward Shults’s 2015 film Krisha was a tense family drama exploring the time-bomb arrival of a troubled family member to a Thanksgiving celebration. The dark film left many chilled and wondering if Shults would lend his talents to an actual horror film. In his new movie, It Comes at Night, fans are rewarded. The film follows a family living alone in a cabin deep in the woods, protected from an end-of-days scenario that has played out all over the world. When a new family arrives, begging to be taken in, things get tense. The two groups struggle to trust each other as they take a stand against whatever lurks outside. To celebrate the opening, the Sie FilmCenter is transforming its lobby into a cabin in the woods for a premiere party on June 8, starting at 6 p.m. Get tickets at denverfilm.org and drafthouse.com; watch the trailer here. 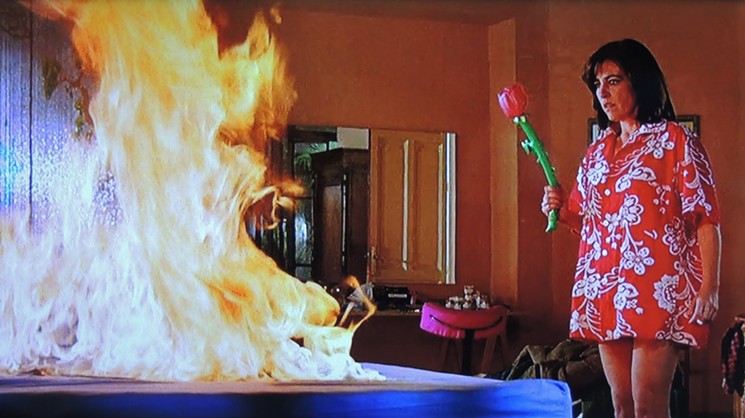 Read on for more of June's best movie events.

Funeral Parade of Roses
Cinelicious Pictures
Funeral Parade of Roses
Opens June 15
Alamo Drafthouse Sloan's Lake
Toshio Matsumoto’s 1969 queer cherry bomb has been a hard-to-find masterpiece, despite its weighty influences on ’70s cinema (Stanley Kubrick credited Funeral Parade of Roses for leading him to adapt A Clockwork Orange.). Cinelicious, a company leading the restoration and release of some great cinema staples like Belladonna of Sadness and Private Property, has taken Matsumoto’s black-and-white gem and given it a 4K polish, and we’ll see a release of it here just in time for Denver's Pride weekend. For the uninitiated, the film is a loose adaptation of Oedipus Rex, with a queer spin: A son murders his mother to sleep with his father. The action is set against the backdrop of Tokyo’s gay underground drag and performance-art scenes. A rare treat, the film is a gonzo party of trans and gay life rolled up in a mess of black mascara and fuzz guitar. Reserve your seats at drafthouse.com, and watch the Funeral Parade of Roses trailer here.

The Bad Batch
Neon Films
The Bad Batch
Opens June 23
Sie FilmCenter
Director Ana Lily Amirpour made a name for herself with her moody, stylistic 2015 vampire tale A Girl Walks Home Alone at Night. Now, armed with a bigger budget and a fan base, Amirpour returns with The Bad Batch, a Mad Max-inspired love story set in a community of cannibals and outlaws living in a dystopian-wasteland version of Texas. Suki Waterhouse stars as Arlen, an amputee who arrives at a twisted commune and fits right in with the gang (played by Keanu Reeves, Jason Mamoa, Giovanni Ribisi and even Jim Carrey). With a scorching soundtrack and style to burn, The Bad Batch may become your new favorite twitchy art-house oddity. Get tickets at denverfilm.org and watch the Bad Batch trailer here.

Baby Driver
TriStar Pictures
Baby Driver
Opens June 28
Denver area theaters
Edgar Wright is one of the most celebrated filmmakers to have moved from the art house to the multiplex without compromising his style, mission or soul. Wright, whose genre-loving hits Shaun of the Dead, Hot Fuzz, Scott Pilgrim Vs. the World, and The World’s End have secured him a spot in the hearts of film nerds everywhere, has returned with Baby Driver — equal parts Drive, The Italian Job and Fast and the Furious, but nowhere as serious. Ansel Elgort stars as Baby, a driving savant motivated by the music on his headphones, which serves as the movie's soundtrack. A big boss (Kevin Spacey) coerces Baby into being his getaway driver. But when Baby finds love and wants to leave the game, he gets tasked with one last job, which may prove impossible to pull off. This film was a runaway hit at this year’s South by Southwest Film Festival. Find tickets and theaters showing it at fandango.com; watch the Baby Driver trailer here.

The Three Musketeers
Courtesy of Chautauqua
32nd Annual Chautauqua Silent Film Series
Wednesdays at 7:30 p.m., beginning June 28
Chautauqua Auditorium
For decades, Colorado film-goers have enjoyed Film on the Rocks at Red Rocks and the silent film series at Chautauqua. The latter is offering eight weeks of the best – and some slightly obscure – classic films from the bygone silent-film era. All of the movies will screen with live musical scores courtesy of the Mont Alto Motion Picture Orchestra, pianist Hank Troy, and the Silent Cinema Trio. Launching the season in swashbuckling fashion is the 1921 action classic The Three Musketeers. In the following weeks, the series will showcase films by Charlie Chaplin, Harold Lloyd and more. Get tickets and see the full schedule at chautauqua.com; watch a scene from The Three Musketeers here.

Maurice
Cohen Media Group
Maurice
Opens June 30
TBD Landmark Theatre
Art-house theaters were given a boost in the ’80s by writing/directing duo Ismail Merchant and James Ivory and their adaptations of British literary works such as Howards End and The Remains of the Day. One of their most colorful creations, Maurice, has been restored for its thirtieth anniversary and will be released just in time to close out Pride month. The film follows the titular character (played by James Willby), who falls in love with his classmate, Clive (the bewitching Hugh Grant), while they romp around Cambridge. The duo is forced to hide their love or risk imprisonment or worse. Based on the novel by E.M. Forster, it's a tuxedo-ripper of substance and one of the earliest gay classics to become an art-house hit, paving the way for many more to come. Find tickets and showtimes at landmarktheaters.com and watch the Maurice trailer here.

Looking for more to do? Check the Westword calendar.