A drawing of Hanzon and Wellman's Shrine to Humanity. Courtesy Lonnie Hanzon

A drawing of Hanzon and Wellman's Shrine to Humanity.
Courtesy Lonnie Hanzon
PrideFest
June 17-18
Civic Center Park
PrideFest is organized by the GLBT Community Center of Colorado, and is the group's largest fundraiser. This year's festival is projected to draw more than 350,000 people, and features 200 vendors, a number of events, a political rally, and, of course, the parade. Performers at the festival include Chad Michael from RuPaul's Drag Race (Saturday at 3 p.m.) and Jennifer Holliday (Sunday at 3 p.m.), and dancers should head to Smirnoff Dance World for a lineup of DJs. Don't miss the "Shrine to Humanity," an art installation from Lonnie Hanzon and Paulo Wellman that celebrates the human spirit and Gilbert Baker, the designer of the rainbow flag, who passed away earlier this year. The work encompasses five shrine structures, more than 200 prayer flags, and four contemplation benches. Hanzon also has a piece on display inside the McNichols Building titled "An Illumination of Toward a Global Ethic," a document from the December 1999 meeting of the Council for a Parliament of the World’s Religions that attempted to establish a shared ethical framework for all peoples across religious lines. Also at the McNichols building: panels of the AIDS memorial quilt. Find schedules and more event information at the GLBT Community Center website.

Coors Light PrideFest Parade
Sunday, June 18, 9:30 a.m.
This parade, say organizers, is the biggest PrideFest parade ever, and features floats and costumes from a number of LGBTQ groups and allies. It begins at Cheesman Park at 9:30 a.m. and ends at the Capitol. Don't miss the debut of CHEER Colorado, who will be bucketing donations and giving them to the GLBT Community Center, and keep an eye out for Dillon Jaymes and Trent Hall, who plan to tie the knot atop a float. Find the parade route on the event's website.

Ken Hamblin
Pride Rally for Equality
Sunday, June 18, 11:30 a.m.
State Capitol Building
200 East Colfax Avenue
Immediately after the parade, the Pride Rally for Equality will convene on the steps of the Capitol, bringing together One Colorado, the Colorado LGBT Legislative Caucus, March On Colorado, state leaders, activists and community groups from throughout the state to rally for LGBTQ equality. 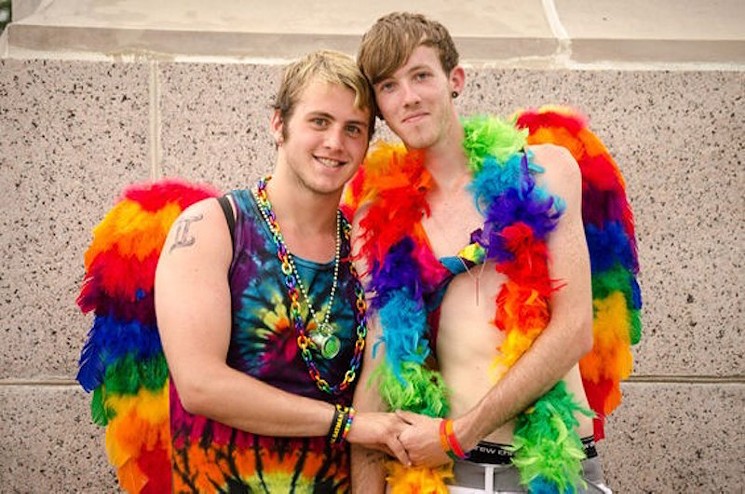