Violent. Blood-dripping. Rage-filled. These are terms critics have used to describe the musical Lizzie, based on the story of infamous ax-wielding parent-killer Lizzie Borden. Chris Jones of the Chicago Tribune called it “a warning of painful consequences for the patriarchy,” and another viewer noted the show contains “a song about decapitating pigeons.”

We were treated to a brilliant Sweeney Todd: The Demon Barber of Fleet Street at the Denver Center for the Performing Arts five years ago, and a great deal of agonized singing in scattered local productions of Spring Awakening and Next to Normal over the last few years, but somehow Lizzie escaped Denver’s attention, despite having been produced at New York City’s Living Theatre in 2009, and after that in Denmark, Canada, the U.K., Sweden, South Korea and several other venues around the United States. Most local companies simply prefer mounting family-friendly, toe-tapping, familiar favorites.

Artistic director Keith Rabin’s recently formed Forge Light Theatreworks is filling the gap, presenting the regional premiere of Lizzie, which opens October 8. This is Rabin’s second theater company; he created Ignite Theatre in 2008, mounted a few productions — some terrific, some shaky, some with elements of both — and then resigned.

“It was pretty successful, but I was burned out,” Rabin explains. “There was something I was missing. We were running into problems with the studio space we used. There were a lot of logistical issues. It was time to let that go.” In January 2017, Ignite mounted its final show, The Wiz.


Now Rabin is back with a new endeavor and some new goals. “I wanted to do shows no other company was doing," he says. "We were not going to do Shrek — though there were good productions here — after someone had done it a month before. We’re doing things that haven’t been on Broadway, off-Broadway or just haven’t made it that far. There is more out there than the stuff everybody’s done multiple times.”

He is committed to sustainability for his organization, and interested in providing opportunities and a source of at least some income for local artists. Forge Light Theatreworks is also responding to the issues of racism and diversity that have filled public discourse since the murder of George Floyd. “Calls for social justice and accessibility are baked into our plan,” Rabin says. Specific company positions have been created, including one that will follow each production from the auditions to closing night to make sure “artists feel safe and protected.” There’s also an accessibility coordinator.

Lizzie brings up its own issues. “I’ve actually known about this show for a while,” Rabin says, “but I couldn’t find a good place for it. One of our committee members brought it up for me again, and we realized it was perfect for an October slot. There is some dark comedy. There is some triggering content about sexual abuse. It’s a very real, raw story, kind of a thriller, kind of suspenseful, kind of like a murder documentary. When you see what Lizzie went through, you understand a bit why she did what she did. Murder is never an answer, but then women had no power. You kind of feel sympathy for her, but there’s some greed involved with the whole thing as well.

“The action takes place in 1892," he adds, "and the setting and costumes are very Victorian. The rock aspect gives this modern feel to a turn-of-the-century story.” 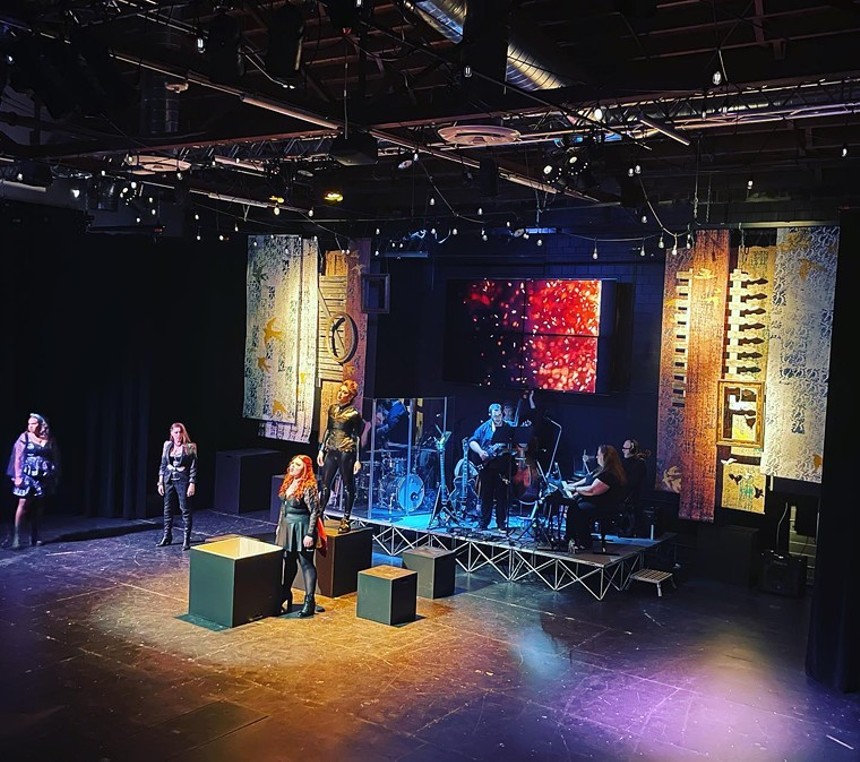 Lizzie's story is told largely in song.
Forge Light Theatreworks
Written by Steven Cheslik-deMeyer, Tim Maner and Alan Stevens Hewitt, Lizzie tells the story of its murderous protagonist primarily in song. “It’s an intense rock musical with a heavy-metal feel,” says Rabin. “Vocally, it’s an extremely difficult show. You need to have a pretty wide range for all of the characters.” The singers are Jennasea Pearce, Abigail Kochevar, Theresa Kellar and Amy Gray. Anna Maria High, a powerful vocalist for whom the term "diva" could have been coined, has taken on the show as her first directorial assignment.

The company’s first show, The Noteworthy Life of Howard Barnes, sold well in August, and there are still funds left from the Ignite days. But ticket sales for Lizzie have been slow. “It’s a scary thing,” Rabin admits. “We’re still in a COVID time. And we’re a brand new-company that doesn’t have a big subscriber or donor base yet.

“But if we go down, I promise we go down fighting.”

Lizzie opens on Friday, October 8, at the People's Building, 9995 East Colfax Avenue, where it runs through October 31. Full vaccination or proof of a negative test are required; get more information and tickets here.
KEEP WESTWORD FREE... Since we started Westword, it has been defined as the free, independent voice of Denver, and we'd like to keep it that way. With local media under siege, it's more important than ever for us to rally support behind funding our local journalism. You can help by participating in our "I Support" program, allowing us to keep offering readers access to our incisive coverage of local news, food and culture with no paywalls.
Make a one-time donation today for as little as $1.