More Things to Do in Denver This Weekend

Tommy Lee Jones loves the opera. buntport.com
On Presidents' Day weekend, the slopes are sure to be packed. But why head for the hills when there's so much to do in Denver? The city's art galleries have some amazing openings planned, and you can find many more free activities here.

Keep reading for ticketed events that are worth the price of admission, especially if you're able to snag a seat at Buntport for Tommy Lee Jones Goes to the Opera Alone, one of the ongoing theater events in town.

Denver Jewish Film Festival
Through March 1
Elaine Wolf Theatre, Mizel Center at the J
The 2022 Denver Jewish Film Festival offers both in-person and on-demand screenings, as well as an entirely “virtual festival” beginning February 23. More than thirty films are in the lineup. On Sunday, February 20, in-person films include Here We Are (With a Father's Kaddish) at 1 p.m., followed by a panel discussion and Q&A with Mizel Arts and Culture General Manager Richard Cowden; JCC Ceramics Studio Program Manager Ari Shahbazi; and Steven Branfman, a ceramic artist who's the subject of the film. Get the full festival details here.

David Johnston & Justin Garber
Sunday, February 20, doors at 6 p.m.
Cervantes' Other Side, 2637 Welton Street
This intimate show presented by Mr. Charlie's Kinfolk Lounge is a benefit for the Second Wind Fund, whose mission is to support at-risk children. There's a silent auction leading to the performances, which start with Alley Car, a four-piece string band, at 7 p.m. That's followed at 8:30 p.m. by bluegrass banjoist David Johnston, of Yonder Mountain String Band renown, and singer-songwriter Justin Garber. Tickets are $25 in advance, $30 day of show; get all the details here.

Laugh Your Craft Off: Re-Visions!
Wednesday, February 23, 5 p.m.
MCA Denver, 1485 Delgany Street
MCA’s Laugh Your Craft Off series hopes to catch you in a terrible mistake: It’s only February, and your 2022 vision board has already gone all to hell. No worries. You now have a second chance to whittle down your wildest dreams into something a bit more practical — or go the opposite direction. This is what Re-Visions! is all about: rearranging your goals to better fit reality, while laughing your ass off to comedian Shanel Hughes. Admission is $20 (or $5 for teens ages eighteen and under) and includes materials and comedy. Reserve a seat here. 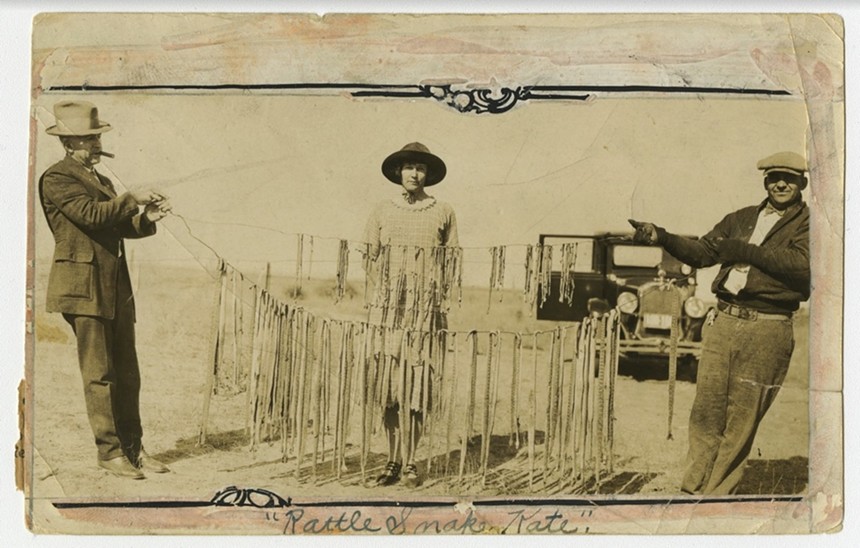 Tommy Lee Jones Goes to the Opera Alone
Through February 27 on Thursdays, Fridays, Saturdays and Sundays
Buntport Theater, 717 Lipan Street
Buntport is bringing back its classic show in which a near-life-sized version of Tommy Lee Jones waxes poetic about cowboy boots, his life as a movie star and his love of opera — particularly Puccini’s Turandot. This is a special pay-what-you-can run, and tickets are almost completely gone...but the show is definitely worth whatever you need to do to get one. Find out more here.

Same Time Next Year
Through February 27 on Fridays, Saturdays and Sundays
Pluss Theatre, Mizel Art & Culture Center, 350 South Dahlia Street
Looking for something light? How about a one-night stand turns into a quarter-century affair in one of the most popular rom-coms of all time. Theatre legend Billie McBride directs Lauren Bahlman and Eric Mather in the nostalgic romantic comedy by Bernard Slade, which follows two lovers who meet for a weekend once a year for more than two decades. Tickets to this Cherry Creek Theatre production are $42 (discounts for students and seniors); get them here.

Rattlesnake Kate
Through March 13, daily (except Monday)
Wolf Theatre, Denver Performing Arts Complex
Cellist Neyla Pekarek was studying at the University of Northern Colorado in 2008 when she came across the story of Rattlesnake Kate, a farmer who killed over 100 rattlesnakes one day in 1925. She became determined to tell Kate Slaughterback’s story — first in song, and now in a new musical that chronicles sixty years in the life of this Colorado legend. Read more about the show here; tickets are $30 to $74 at denvercenter.org.

Moon Over Buffalo
Through March 20, Thursdays through Sundays
MIners Alley, 1224 Washington Street, Golden
The show must go on! The action follows Charlotte and George Hay — an acting couple not exactly at the level of the Lunts — on tour in Buffalo in 1953. Tickets range from $17 to $45; get them here.

Know of a great event around town? We'll be updating this list through the weekend; send information to [email protected]
KEEP WESTWORD FREE... Since we started Westword, it has been defined as the free, independent voice of Denver, and we'd like to keep it that way. With local media under siege, it's more important than ever for us to rally support behind funding our local journalism. You can help by participating in our "I Support" program, allowing us to keep offering readers access to our incisive coverage of local news, food and culture with no paywalls.
Make a one-time donation today for as little as $1.