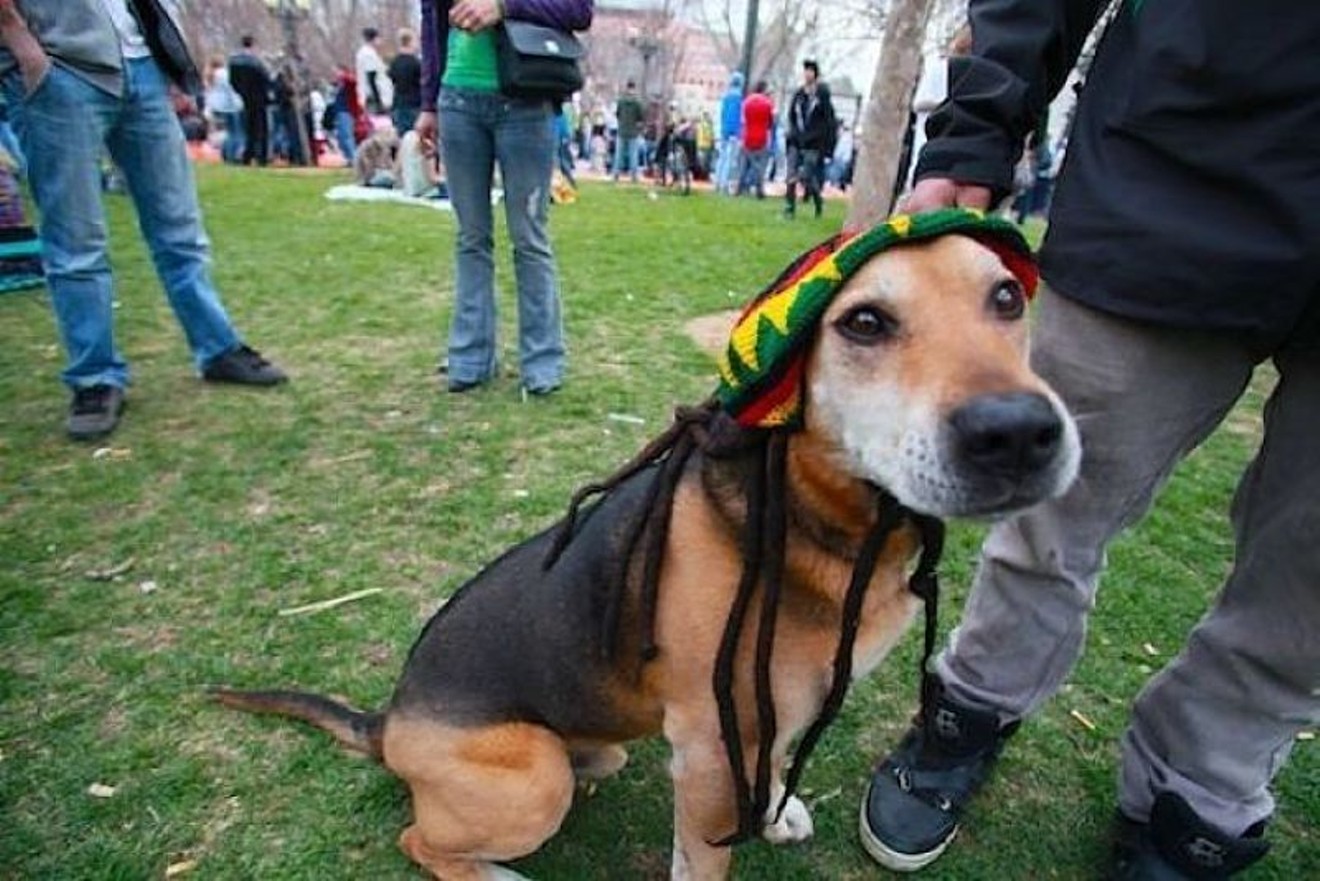 Are you ready for 4/20? Brandon Marshall
Colorado's biggest unofficial holiday is just a few days away, but there are plenty of things to do in Denver both before and after Civic Center Park gets lit. Here are the 21 best events on the calendar over the next seven days.

Perennial favorite Lucha Libre & Laughs leaps off the ropes and back into the ring with a special Tuesday showcase at 7:30 p.m. on April 18, at the Oriental Theater, 4335 West 44th Avenue. Boasting the same ringside thrills and minute-to-minute hilarity of a regular LLL showcase at half the price, Cheap Pop! has a brawny and bawdy lineup both on the mic and in the ring. With color commentators Nathan Lund and Mitch Jones along with standups Cody Spyker and Andrew Bueno opening for headliner Andy Peters (Those Who Can’t), the laughs side of LLL’s equation is in good hands. The real marquee attraction, however, is the title match between Lucha Libre & Laughs champion Cody Devine and Japanese wrestling legend Kikutaro. Visit theorientaltheater.com to buy tickets, a bargain at five bucks.

Most readers know local author and librarian Sean Eads for his science fiction, fantasy, and horror fiction; his newest book, Trigger Point, released by Hex Publishers, marks his first stab at the mystery/suspense genre. “I’m an author who happens to be tied into the reading community through librarianship,” Eads explains. When he realized that readers were having trouble finding a book with the right elements of humor, suspense, and romance, he decided to write one himself. Trigger Point retreats to the golden age of detective fiction, following an amateur sleuth, massage therapist and reiki healer tasked with solving another masseuse’s murder. Eads will read from the book at 7 p.m. Tuesday, April 18, at the Tattered Cover Colfax, 2526 East Colfax Avenue; copies will be available for purchase. For more information, go to tatteredcover.com or call 303-322-7727.
Wednesday, April 19

Few things in life are better than a concert at Red Rocks. But on Wednesday, April 19, there’s even more reason to party at the classic concert venue: 420 Eve on the Rocks, a kickoff to Colorado’s unofficial 4/20 holiday. Mighty Tree has booked six bands — Method Man & Redman, Flatbush Zombies, Curren$Y, $uicideBoy$, Futuristic and RDGLDGRN — and the show will start at 4:15 p.m., to ensure some big noise at, you guessed it, 4:20. General admission tickets are $45 in advance or $50 at the gate (VIP will run you $150); find out more at cervantesmasterpiece.com. Red Rocks Amphitheatre is at 18300 West Alameda Parkway in Morrison.

Why do we put more thought into selecting our cauliflower than our cabernet sauvignon? If eating organic, natural produce is important, then knowing how the grapes that go into each bottle are treated is important, too. The goal of Colorado Natural Wine Week, which runs from April 17 through 22 at venues all over town, is to educate consumers about wines that are made with organic and biodynamic practices and that treat the grape with respect — from the vine to the dinner table. The pinnacle of the series of wine dinners, tastings and bar takeovers is the Grand Showcase on Wednesday, April 19, at Space Gallery, 400 Santa Fe Drive, featuring more than 200 wines made with traditional old-world techniques, along with guest appearances by vintners from ten wineries around the world, including Colorado’s own Demeter-certified Jack Rabbit Hill Winery. Tickets are $39 each or $75 per couple for the Showcase, which runs from 4 to 8:30 p.m. See naturalwineco.com for a complete list of the week’s events and to purchase tickets. It’s the best week to swirl, sip and spit.

Cary Elwes, as you wish.
The Princess Bride
Thursday, April 20
Colorado’s biggest unofficial holiday returns to Civic Center Park on Thursday, April 20. From 10 a.m. to 8 p.m., the annual 420 Rally will light up the joint with a cannabis culture festival. The vendor village will be open all day, with marijuana-friendly food booths and businesses, there will be live music from 2 to 6 p.m., highlighted by a performance by 2 Chainz…and it’s all free! Find out more at denver420rally.org.

An actor with looks, brains, humor and class is hard to find in Hollywood, but Cary Elwes has them all. In Robin Hood: Men in Tights, Elwes could have been just another pretty face as the noble protagonist, but his line delivery rivaled that of Achchoo, aka Dave Chappelle. Of course, Elwes also played Westley, a dashing prince quick with the sword and the punchlines, in The Princess Bride. Over the years Elwes has embraced his iconic character and the film — he even wrote a book about it — and the brilliant Brit will bring his behind-the-scenes knowledge to the Paramount Theatre, 1621 Glenarm Place, for The Princess Bride: An Inconceivable Evening With Cary Elwes, a two-night run complete with a screening of the film and a Q&A. Inconceivable, indeed. Tickets starting at $29.50 are still available for the event at 7:30 p.m. on Thursday, April 20; tickets for the Friday, April 21, show start at $39.50. Purchase both at altitudetickets.com.

Denver’s favorite debased and debauched comedy game show, Uncalled Four, lurches back onto the scene just in time to celebrate its third anniversary along with the 4/20 holiday. Co-producers Jake Browne and Samantha Taylor will welcome back returning Uncalled Four champions Aaron Urist, Sam Tallent and Jodie Champion, along with wild card David Gborie, for a take-no-prisoners competition for the title of Denver’s Worst Person. Essentially an evil Mad Libs with the cards written by standup comedians, this entirely original game is merely the opening act for an evening of 4/20 festivities that includes a performance by the Ying Yang Twins and a consumption-friendly Colorado Cannabis Tours bus stationed outside the Oriental Theater at 4335 East 44th Avenue. Doors open at 6:30 for the 7 p.m. show on Thursday, April 20; admission to the 18+ event ranges from $15 to $25 at holdmyticket.com.

Square Product Theatre founder Emily K. Harrison met Australian playwright Amelia Roper at Local Theatre’s annual Local Lab play festival in Boulder. They hit it off, and after an exchange of scripts, Harrison decided that Roper’s She Rode Horses Like the Stock Exchange, a tale of two couples struggling under the crushing weight of the recession, fit perfectly with Square Product’s eleventh-season theme of “Power and Privilege.” “There are so many laugh-out-loud moments in the play,” Harrison says. “But at its core, it’s a very incisive and harrowing social commentary — not only on greed, but on sexism and relationships.” She Rode Horses opens at 8 p.m. Thursday, April 20, in the Carsen Theatre at the Dairy Arts Center, 2590 Walnut Street in Boulder, and runs through May 13. For a complete schedule and tickets, $15 to $24 (two-for-one on April 20, 21 and 29 and May 3 and 4, and $15 for all seats on May 1), visit tickets.thedairy.org or call 303-444-7328. Learn more at squareproducttheatre.org.

Goldyn joins the Month of Photography.
UnEarthing
The high-fashion Highland boutique Goldyn joins the Month of Photography 2017 roster with a late entry generated by TARRA: Women Who Create. The show, UnEarthing, brings together a quartet of women working in the fields of photography, fine craft and design for a collaborative meeting of the minds on the theme of “Matriarchy: The Leadership Role We Inherit.” Photographers Knomia Barron Rodriguez and Kyra Weinkle have joined architect/designer Jane Jordan Gravely and innovative and artful quilter Kerry Larkin of Comma Workshop to create one overarching window installation, which debuts at a reception from 5 to 8 p.m. on Thursday, April 20, that will also boast wicked spins by DJ duo the NightShift. Goldyn is at 2040 West 30th Avenue; find info at mopdenver.com or on the UnEarthing Facebook event page.

Ephemeral life situations have never kept women from writing. A pencil and a piece of paper are all that’s really needed to begin interpreting thoughts and dreams, and at the Gathering Place, a Denver drop-in center for at-risk women, this hasn’t gone unnoticed. Among its many services, the nonprofit operates a writing group, offering a conduit for personal empowerment for women with few resources. And they have things to say: Hear more when Gathering Place writers Malinda Detweiler, Elizabeth Vonaarons and Fran Ford read from their work at 7 p.m. Thursday, April 20, at Counterpath, a Denver event venue and book store at 7935 East 14th Avenue. Admission is free; learn more at counterpathpress.org.