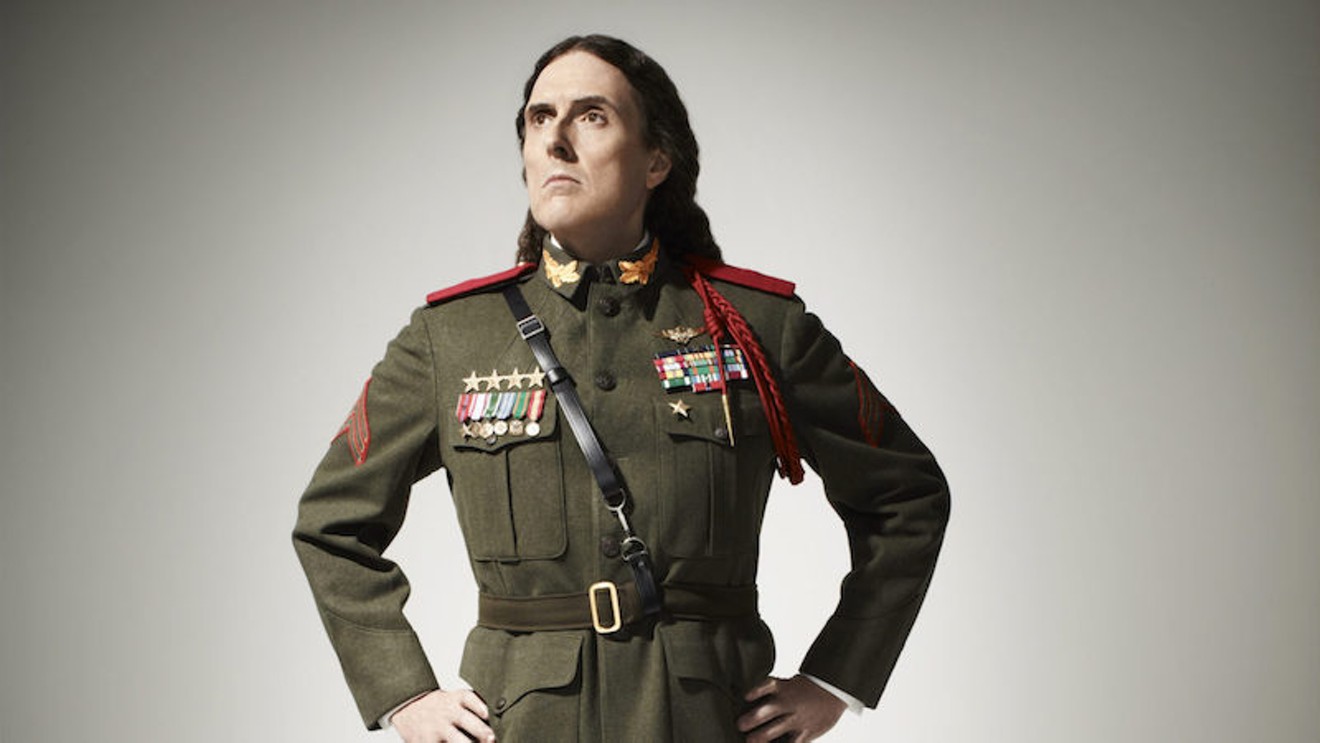 "Weird Al" Yankovic brings The Ridiculously Self-Indulgent, Ill-Advised Vanity Tour to Denver's Paramount Theatre on May 1. Robert Trachtenberg
While April's proverbial showers are never guaranteed in arid Colorado, Westword's monthly forecast predicts torrents of laughter all month long. From locally produced showcases in dive-bar back rooms to major acts with arena-sized followings, the next thirty days have enough comedic variety in store to tickle any sort of fancy. The list also includes a sneak peek at a hot ticket from early May. Keep reading for the ten best comedy shows in Denver this month. 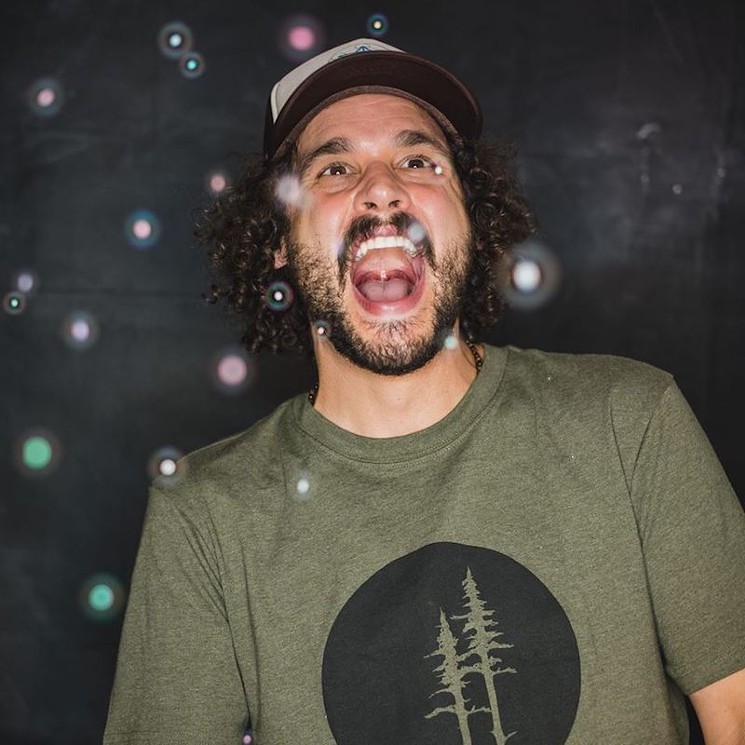 It's been nearly a year since local comic Caitie Hannan and Westword's own Byron Graham imported one of New Orleans's most delightful shows to El Charrito's Comedy RoomRoom. A rib-tickling and liver-pickling hybrid of comedy show and drinking game, the format of Designated Drunkard is fairly straightforward: Comics perform in front of an easel pad that contains a list of their foibles, mannerisms and signature jokes, and the crowd takes a drink each time the comic hits his or her prompts. April's barn-burning lineup includes Kyle Pogue, Gabby Gutierrez-Reed, Tairee Dillard, Brad Galli, New York's Danny Felts and headliner AJ Finney. Visit Designated Drunkard's Night Out page to buy tickets, $5, and find more details. 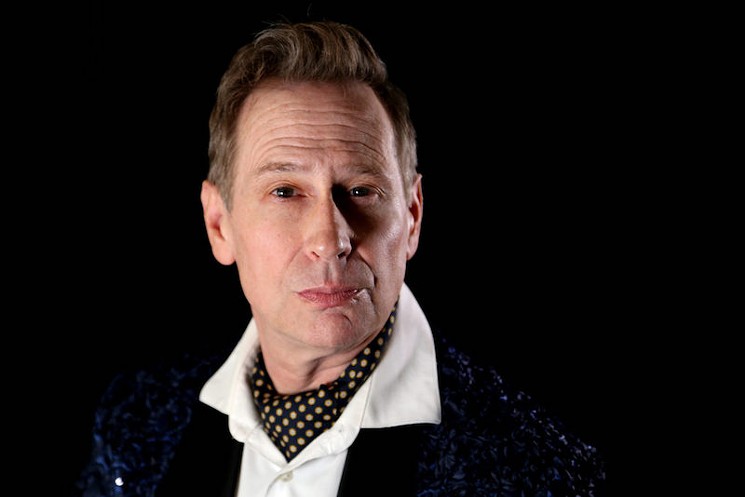 An outlier even among the defiantly weird cast of the groundbreaking sketch-comedy troupe Kids in the Hall, Scott Thompson has paradoxically maintained a bustling stage and screen career while securing few roles that showcase his immense performative gifts. In addition to livening up the ensembles of cultishly adored shows like Hannibal, The Larry Sanders Show and What Would Sal Do?, Thompson has branched out into standup and authored a graphic novel, Husk: The Hollow Planet, and the faux memoir Buddy Babylon: The Autobiography of Buddy Cole — each based on fan-favorite sketch characters. Speaking of Buddy Cole, Thompson is reviving the loose-lipped and quick-quipped character for "Après Le Déluge the Buddy Cole Monologues," and his tour rolls through Denver's own Oriental Theater on Monday, April 9. Visit the Oriental's box-office page to buy tickets, $15-$40, and learn more. (Read our predictably delightful interview with Thompson.)

Hasan Minhaj is an actor, standup comedian and storyteller best known for his role as one of the senior correspondents on The Daily Show. After appearing in a smattering of bit parts on shows like Getting On and Arrested Development, Minhaj landed the famously career-launching gig in 2014, and has subsequently followed through on his initial promise with a roasty performance at 2017's Trump-less White House Correspondents' Dinner and the release of his first standup special, Homecoming King. His star just continues to rise: Netflix recently announced a 32-episode order for a new weekly comedy show with Minhaj at the forefront. Although he’s consistently funny and quick with a pop-culture reference, what truly makes Minhaj excel as a performer is his innate pathos and sincerity. He continues to perform live as much as his day job allows, telling jokes in front of ever-growing crowds. Tickets go on sale April 10; visit the Macky Auditorium events calendar for more details.

Lewis Black is a thoroughly astute political satirist. Assuaging righteous outrage with laughter is every comedian's noble goal, but Black rises above the majority of his peers (at least those without their own eponymous television programs) with his keen analysis of social ills. Star and co-creator of Comedy Central's dearly missed debate series The Root of All Evil, Black is never better than when he has a point to prove and a fire in his belly — so it's fitting that his most high-profile film role to date was as the unmistakable voice of Anger in Pixar’s Inside Out. Black has settled into his role as the elder statesman of The Daily Show, where his "Back in Black" segments have outlasted the tenures of former hosts Craig Kilborn and Jon Stewart and have been a highlight of the Trevor Noah era; he's also published three best-selling books beloved by fellow atheists, including Nothing Sacred, Me of Little Faith and Black Christmas. Black returns to Denver with another fiery hour of standup as the Joke's On Us tour rolls through Denver's Paramount Theatre for a pair of muckraking, barn-burning, gut-busting shows. Admission is $45 to $75 at Altitude Tickets, where you'll also find more details.

Estes Park's Stanley Hotel has been enticing visitors with its own haunted history for years, but lately the historic lodge has settled upon a ghost-free way to scare up business. Celebrate the grand opening of the Stanley's stately Pavilion Amphitheater with a giggle or two as "Stanley Night Live" welcomes Jim Breuer and Tom Papa to the stage for a pair of top-notch standup shows in some of the state's loveliest surroundings. Showtimes are at 7 and 9:30 p.m.; visit the Stanley Hotel's events calendar to get tickets, $40 to $65, and learn more.

A television star with a massive following in his native India, Amit Tandon's gentle observational humor has endeared him to audiences in twelve different countries. Founder of the "Grandmasters of Comedy," Tandon's business savvy and branding have helped him gain notoriety in India's nascent but thriving standup scene. Tandon, who's also often billed under the sobriquet "The Married Guy," has the precise sort of broad appeal that unites people of all ages, genders and nationalities. Admission is $25 to $85 via Tandon's Ticket Hungama page.

Godfrey is one of those standup comedians whose broad appeal and telegenic physique obscure the sharpness of his material. He's performed on Comics Unleashed and Late Night With Jimmy Fallon, and in 2011 he recorded his first one-hour special, Black by Accident, for Comedy Central. He's also appeared on shows like Black Dynamite, The Nightly Show With Larry Wilmore and Louie, and in movies like Soul Plane, Zoolander and Phat Girlz. Godfrey is a Denver Improv favorite whose performances feature nimble riffing, committed physicality and a celebrated facility for quick-witted crowd work. He returns to the venue often, yet his draw never abates. Visit the Denver Improv box-office page for tickets, $15 to $50, and more information.

Heavyweight champion of the Colorado scene and perennial Best of Denver award winner Lucha Libre & Laughs returns to the Oriental Theater for another evening of punches and punchlines. Featuring Andrew Bueno, Cody Spyker, Nolawee Mengist and Christie Buchele on the mic and Yoga Monster Mike Sydal, "Limitless" Keith Lee, Allie Gato, Lonnie Valdez, Super Thunder Frog and more in the ring, it's an ideal to opportunity to enjoy some of Denver's finest brawn and buffoonery. Join host Bobby Valentino (Greg Baumhauer), producer/ oblivious referee Nick Gossert and color commentators Sam Tallent and Nathan Lund at the Oriental Theater on Friday, April 27, and see what the Lucha Libre & Laughs crew have in store for their Future Endeavors. Visit the Oriental's box-office page to buy tickets, $15 to $60, and get more details.


The Comedy Get Down
Saturday, April 28, 7 p.m.
Bellco Theatre

A dream team of showbiz veterans — Eddie Griffin, George Lopez, D.L. Hughley and Cedric the Entertainer — are bringing their popular Comedy Get Down tour back through Denver for another onslaught of laughs. Each of these four headliners has decades of experience laying waste to stages, with starring roles in namesake television series and loyal hordes of underserved fans. No matter what the performance order happens to be, there are no openers here. Visit the Bellco Theatre box-office page for tickets, $49 to $113, and details.

Historically, performances from "Weird Al" Yankovic have indulged in lavish spectacle, complete with elaborate costume changes and showstopping set pieces. Pop culture's preeminent parodist has something different up his Hawaiian-print sleeves this time around: The Ridiculously Self-Indulgent, Ill-Advised Vanity Tour, which presents a more intimate experience and a novel departure from Yankovic's arena-sized antics. "Weird Al" is hitting the road — along with opening act Emo Phillips — with a pared-down stage presentation and a set list full of b-sides, deep cuts and original (aka non-parodic) songs. In other words, it's catnip for comedy nerds; tickets ($46 to $79.50) are on sale now at Altitude Tickets.