Adopt a horse this Saturday at the Dumb Friends League's Fifth Annual Open House at Harmony Equine Center. Denver Dumb Friends League
While living in Denver gets more expensive by the month, our fair city's creative community has your entertainment needs covered. While there's always plenty of marquee talent circulating through local venues, many budget-conscious Denverites balk at some of the steeper ticket prices. Fortunately for those destitute readers, we've scoured the town for ten great events anyone can attend for less than ten American dollars, including four events that are entirely free. Anyone with an open mind and a crisp Hamilton will find plenty to do around town this weekend, from burlesque wiggles to drunken giggles. 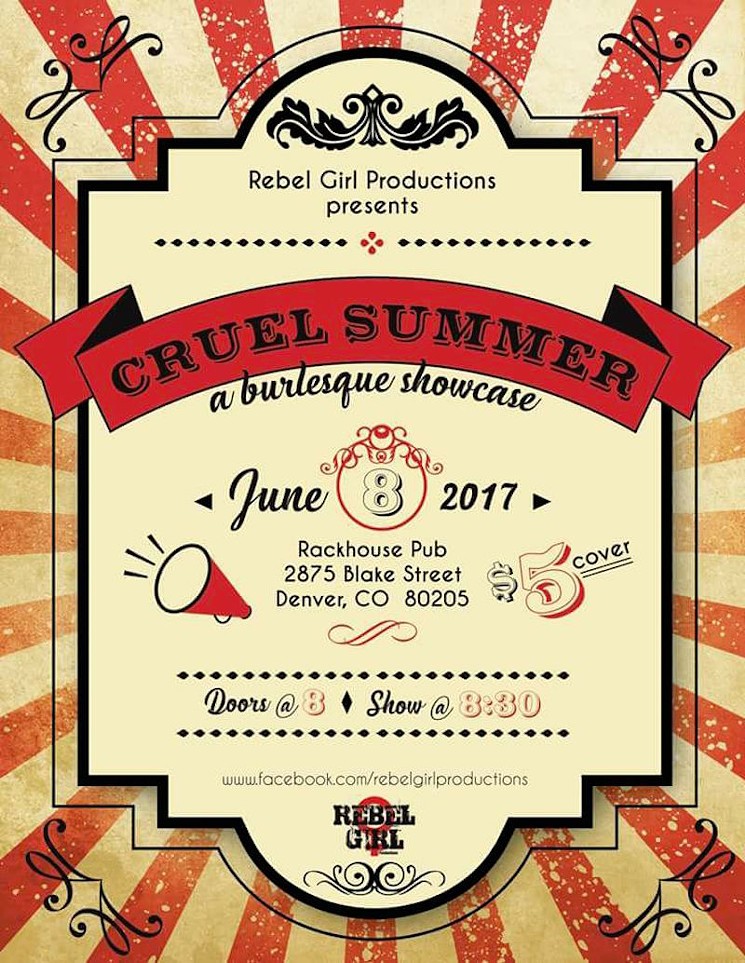 Rebel Girl Productions
Cruel Summer
Thursday, June 8, 8:30 p.m.
Rackhouse Pub
$5
Back in February, two burlesque dancers joined forces to put on a show to raise money for a City, O' City employee who had fallen ill and didn’t have health insurance. The event was a triumph. Five months later, the same dancers have formed Rebel Girl Productions, a burlesque company that will hold its first show, Cruel Summer, at Rackhouse Pub, 2875 Blake Street, on Thursday, June 8, at 8:30 p.m. The for-profit production will showcase a motley crew of dancers from across the state who are “sure to make you sweat,” according to organizers. Better yet, tickets are just $5. For more information, visit Cruel Summer's Facebook event page.

John B. Lane
Sgt. Pepper's Lonely Hearts Club Band's Fiftieth Anniversary Celebration
Friday, June 9, 8 p.m.
Mercury Cafe
$10
Beatles maniacs, unite! It's been fifty years since the four Liverpool lads gathered to record their eighth studio album, signaling a bold new direction for the band. An instant classic upon release, Sgt. Pepper's Lonely Hearts Club Band has only grown in esteem in the intervening years, to the point that it's widely considered the best rock album ever recorded. Celebrate the Mile High way with local staple the Mercury Cafe as it invites Beatles experts Mr. Peters and Mr. Lane for a poppy production full of rare studio outtakes, behind-the-scenes stories and plenty of psychedelic videos. Tickets, $10, are available at the door. Visit mercurycafe.com to learn more.

Dumb Friends League
Fifth Annual Harmony Equine Center Open House
Saturday, June 10, 10 a.m.
Dumb Friends League Harmony Equine Center
Free
Get ready to horse around this weekend at the Dumb Friends League Harmony Equine Center Open House. From 10 a.m. to 3 p.m. on Saturday, June 10, guests are welcome to tour the Harmony facilities with a knowledgeable guide, watch obstacle-course training demonstrations and learn the basics of horse ownership. In addition to sampling vittles from on-site food trucks, guests can also participate in a chili cook-off and shop for all their horse-related needs at specialized vendors. Those interested in adopting their own noble steed can also meet their new four-legged friend in the Adoption Barn area. Admission is free; visit ddfl.org to learn more.

Indivisible Denver
Resist Forward Summit
Saturday, June 10, 9 a.m.
Shorter Community AME Church
$5
Issues are bubbling up in the new political climate of 2017 faster than we can beat them down. So how do people get together and deal with the barrage of questions about social justice and move forward in unity? Finding common ground is the purpose of the Resist Forward Summit, a daylong collaboration of Indivisible Denver, Dr. Timothy Tyler of Shorter AME Community Church and more than 25 progressive groups in the city. The day includes keynote speakers like immigrant/activist Jeanette Vizguerra, roundtable discussions, and tools and training tips for nonviolent activism, along with some rousing entertainment by the Shorter choir. Get together and talk it through from 9 a.m. to 4 p.m. on Saturday, June 10, at Shorter AME, 3100 Richard Allen Court in northeast Denver. Organizers are requesting a minimum donation of $5 at the door, and lunch will be provided. Space is limited, and an advance RSVP is required. For details, visit the Facebook event page.

Read on for more of this weekend's best events under $10.

Caitie Hannan
Designated Drunkard
Saturday, June 10, 7 p.m.
El Charrito
$5
After participating in a comedy scene for long enough, viewers who see comics perform over and over will learn not only their jokes, but their tics and idiosyncrasies as well. Designated Drunkard: A Comedy Drinking Game has turned these observations into a rib-tickling and liver-pickling standup showcase. Co-produced by two open mic hosts —Caitie Hannan and Westword's own Byron Graham — who've both watched an inadvisable amount of local comedy, the format is fairly simple: Hannan and Graham write down their notes about each comic on a large easel pad and prompt the audience to drink each time the comic on stage says or does something on their list. Throughout the show, one of the hosts remains on stage in the role of Designated Drunkard to guide the audience and generally make a drunken spectacle of themselves. Inspired by "Wait, What?" a similarly boozy brouhaha run by New Orleans comics Geoffrey Gauchet and Isaac Kozell, few shows achieve the same level of bacchanalian abandon. June's lineup features local favorites Corey Rhoads, Aaron Maslow, Miriam Moreno, Ben Bryant and Anthony Crawford, who will hit El Charrito's Comedy RoomRoom stage to entertain the boozy throngs. Tickets, $5, are available via Nightout.

MOA
Creatura Psychedelica
Saturday, June 10, 7 p.m.
Marjorie Park
Free
If you’re headed to Fiddler’s Green Amphitheatre for a show this summer, be prepared to encounter a freaky menagerie of giant inflatable bugs posted up for the season in Marjorie Park, on the north side of the concert venue. Hatched from the imagination of San Francisco installationist Bill Kennedy, aka “Inflatabill,” the monumental insects, which are illuminated at night, make up Creatura Psychedelica, a color-splashed summer-long pop-up garden display mounted by the Museum of Outdoor Arts. In between Fiddler’s Green appearances, the portable installation will also travel to other events and places around the state, but not before its Marjorie Park unveiling from 7 to 10 p.m., on Saturday, June 10, at 6331 South Fiddler’s Green Circle in Greenwood Village. The colors of Creatura Psychedelica will be enhanced by a mini-fest of fire spinners, live music by the Ned Garthe Explosion, the ArtsMyths Mask Shoppe and food-truck fare; admission is free. Keep abreast of the migrating insects and their summer travels at moaonline.org. 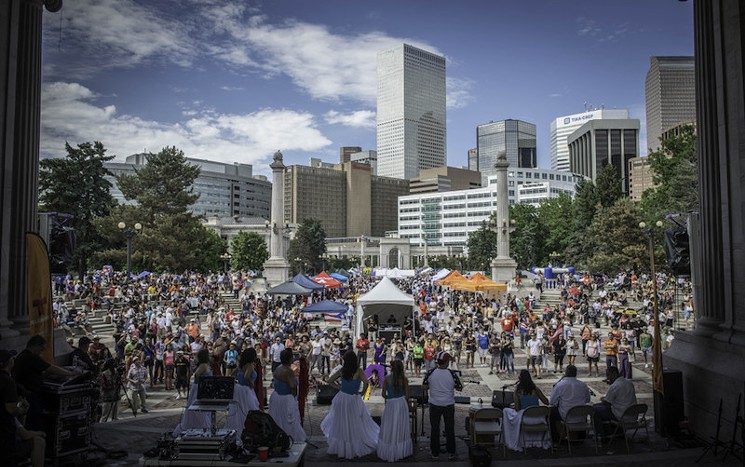 Taste of Puerto Rico
Taste of Puerto Rico
Sunday, June 11, 11 a.m.
Civic Center Park
Free
A mixture of indigenous, Spanish, Caribbean, African and American flavors, Puerto Rico’s aptly named “cocina criolla” (Creole cuisine) starts with beans, rice, corn and roots and takes off from there with the addition of seafood, meats and spices. Yes, it’s delicious — and don't forget to top it off with sticky-sweet flan and rum-soaked arroz con dulce. That’s a good enough reason to drop by the Taste of Puerto Rico Festival, but the annual party in the park also includes live music and cultural entertainment, vendors, family fun and a joyful sense of community. Find your inner islander from 11 a.m. to 7 p.m., Sunday, June 11, in Civic Center Park at Colfax Avenue and Broadway; admission is free. Learn more at atopr.com.

Promo Poster
Mr. Smith Goes to Washington
Sunday, June 11, 1:30 p.m.
Denver Central Library
Free
Amid the bleakness of the current political landscape, a longing to return to the comforts of Americana, to an era when attaining our national ideals at least seemed like a common goal, is all too understandable. Mr. Smith Goes to Washington is not only a standout classic of Frank Capra's all-American oeuvre, it's also both an interrogation of the Democratic process and a paean to the noble goals it can achieve. Jimmy Stewart stars as a moral yet naive freshman senator whose dreams of reform are scuttled by the endemic corruption of Washington's corridors of powers. While the film's idea of a scandal seems quaint in comparison to the news these days, its tale of stubborn resistance resonates just as much today as when it was released. Whether revisiting the story or seeing it for the first time, don't miss the free midday screening of Mr. Smith Goes to Washington on Sunday, June 11, beginning at 1:30 p.m. at Denver Central Library, 10 West 14th Avenue.

Rachel Weeks
Birthday Party With David Huntsberger
Monday, June 12, 7 p.m.
Rackhouse Pub
$5
Blow out the candles, because the Pussy Bros. are back with another Birthday Party, and they've got a real corker planned for June. Janae Burris, Rachel Weeks and Christie Buchele are three of Denver's most prominent comics and well worth seeing on their own, but they've stuffed your goodie bags with giggles this month by booking David Huntsberger to headline, thus concluding his brief run of local shows. Former co-host of the Professor Blastoff podcast and SYFY's Reactor, Hunstberger is a brainy joke writer prone to hilarious digressions. He's appeared on Last Comic Standing as well as Comedy Central's Premium Blend, and he was recently a staff writer for The Benson Interruption. The theme this month is "pajama party," so join the Bros. along with DJ Erin Stereo in your coziest or comeliest nighttime attire. While the name "Birthday Party" is usually just meant to evoke a celebratory atmosphere, this show just so happens to nearly coincide with Buchele's own birthday, which means there's the bonus entertainment of watching her try and keep it together. Tickets, $5, are available via Nightout.

Looking for more to do? Check Westword's calendar.