The Five Best Things to Do for Free in Denver, April 24-27 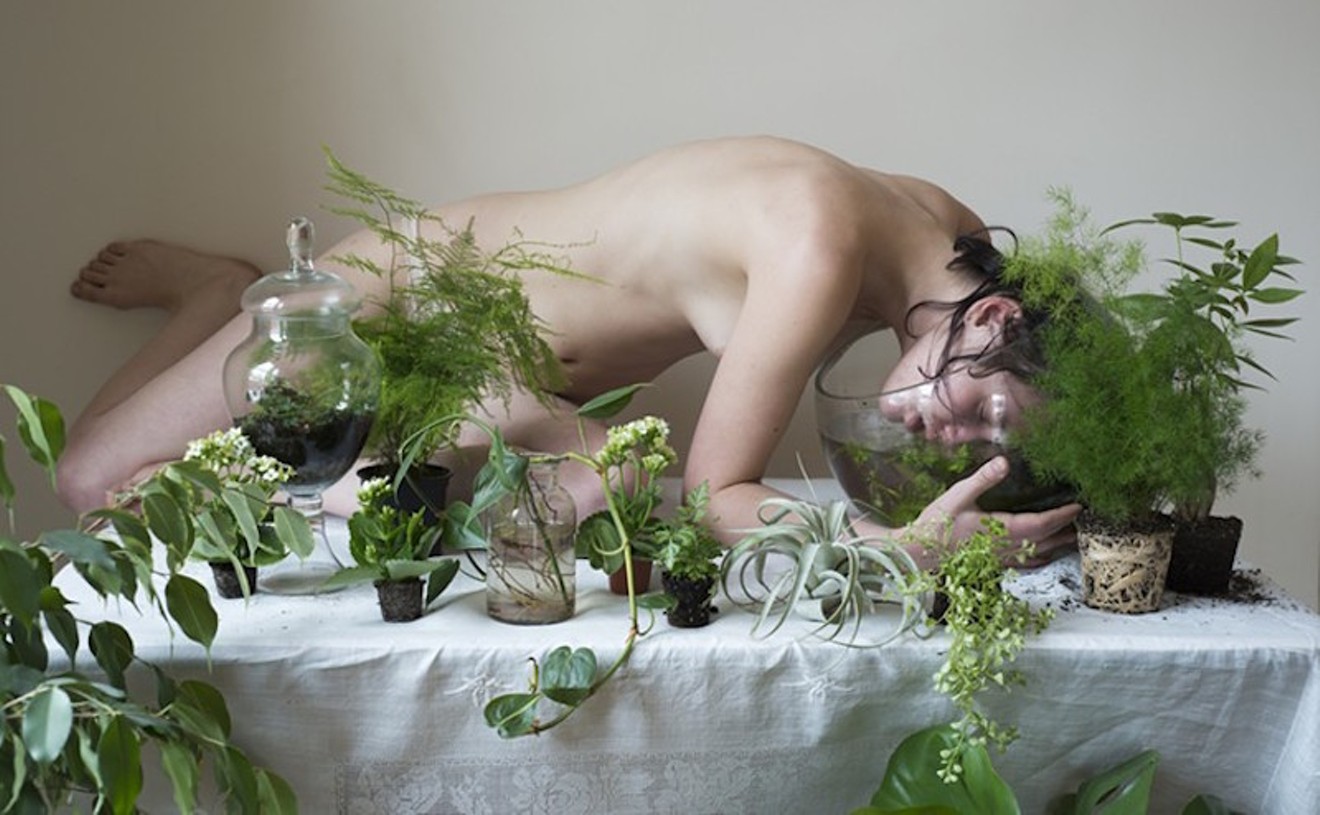 Kristen Hatgi Sink's "Potted Plant Life" at Art Gym. courtesy the artist
The Denver arts community is so populated with self-starting creatives that even the most penny-pinching locals have ample opportunities to enjoy free entertainment. Whether taking a midday break to enjoy the calming strings of the Avium Chamber Music Quartet, guffawing through a mouthful of tasty treats at 3 Course Comedy or eyeing works of art created by local power couples, locals can engage with the arts community without breaking the bank. So check out one of the following events, and let freedom ring all week long! 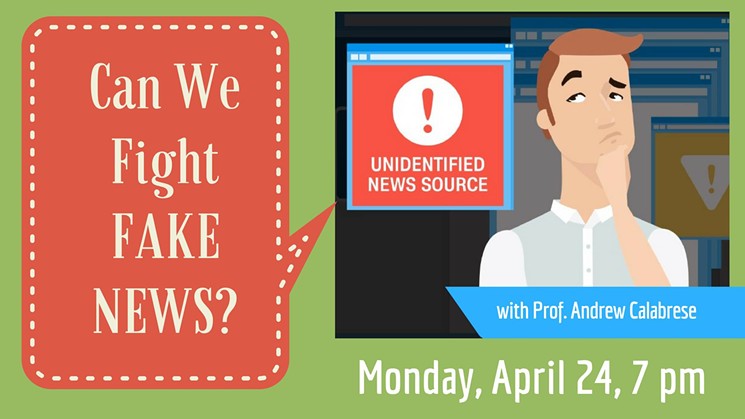 Remember when John Podesta was accused of running a child sex-trafficking ring out of a Washington D.C. pizza shop? And when the Clinton campaign was sullied with accusations that it was involved in a devil-worship ring led by performance artist Marina Abramovic? These are just two of the fake news stories that captured the public imagination and possibly influenced the election. What is “fake news?” Who’s behind it? And what can we do to stop it? Andrew Calabrese, a media-studies professor at the University of Colorado’s College of Media and Communication and Information, has devoted his career to researching media literacy and policy, and how activists are using digital media. He'll address this hot topic "Can We Fight Fake News?" at the Lafayette Public Library. Visit the event's Facebook page to learn more. 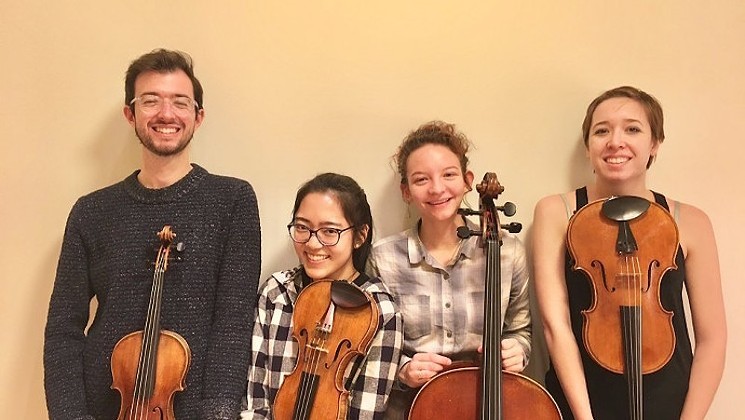 Shuffle off the midday doldrums with Lunchtime Listening, a series of free concerts from the Friends of Chamber Music. A volunteer-based organization, the Friends of Chamber Music have been preserving their art form by performing a diverse array of concerts all over the city, and training the next generation of musicians since 1954. On Tuesday, April 25, the program continues with a free noontime concert from the Avium Quartet, which will be playing selections from Schubert's "Quartet No. 13" and Shostakovich's "Quartet No. 14" before closing with Michael McLean's jaunty "Tango and More." Filling the bustling lobby of 1801 California with the soaring swells of strings, Lunchtime Listening is an ideally located antidote to workday woes. Go to the Friends of Chamber Music website for more information. 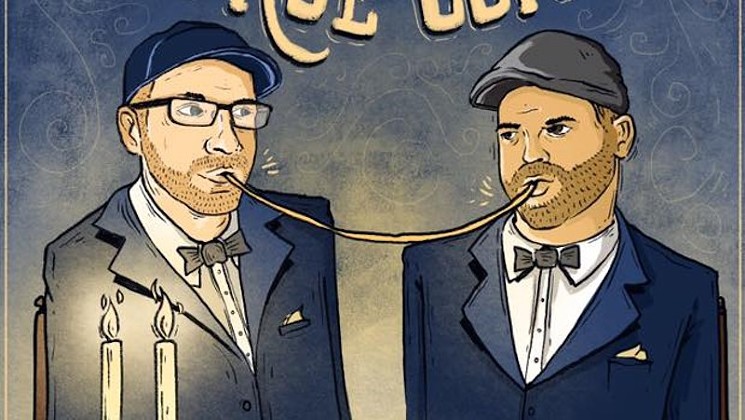 Denver-based comedians Adrian Mesa and Eric Henderson just want to feed you. For three years, the duo behind 3 Course Comedy has cultivated food jokes and trivia games, conducted interviews with performing comics and developed a durable showcase format while preparing a three-course meal for a coterie of steadfast Deer Pile loyalists. An ongoing podcast cataloguing the shows of months past is available on iTunes, though the audio version offers only a fraction of the live experience. This month's theme is fitting for the apocalyptic nature of our times: Fallout Foods. Join Mesa and Henderson along with local comics Aaron Maslow, Mina Thorkel and Zach Welch as they crack their best food jokes while whipping up enough fallout foods to feed a whole bunker. More information can be found on the event's Facebook page.

Read on for more of the best five free events in Denver.

Donald Trump’s United States hasn’t exactly garnered a reputation for welcoming strangers with open arms. Tuesday, the Children’s Museum of Denver at Marisco Campus will launch its latest public art exhibition, Opening Doors, a celebration of the multicultural community that we live in. At the entrance of the museum will be a ribbon created out of eleven open doors. Jay Michael Jaramillo and Jerry Jaramillo, Ramon Bonilla, Armando Silva and Jennifer Ghormley are among the artists whose work will be on display. Mayor Michael Hancock will participate in a ribbon-cutting at 8:45 a.m. Afterward, the museum will hold a pay-as-you-will day, which means you can get in for free – but consider throwing the institution a few bones if you can. Go to the event's Facebook page for more information.
click to enlarge

The trials of relationships have inspired artists since humanity's first etchings, yet the influence of love upon art remains as mysterious as it is perennially fascinating. Art Gym Denver is celebrating the dynamic interplay between creative couples with Alone + Together, a new exhibition featuring collaborations between Denver art-world power couples hung alongside their solo works – a juxtaposition that invites contemplation. Featuring the art of local artsy duos Sylvia Montero and Tony Ortega, Kristen Hatgi Sink and Mark Sink, as well as Mamiko and Homare Ikeda, Alone + Together incorporates calligraphy, video, photography, painting, collage and more into an eye-catching and thought-provoking visual feast. The artists will be present at a free opening reception from 5 to 8 p.m. on Thursday, April 27; the exhibit will be on display until May 20. Find out more about Alone + Together here.