Free for All: The Five Best Free Events in Denver, April 17-20 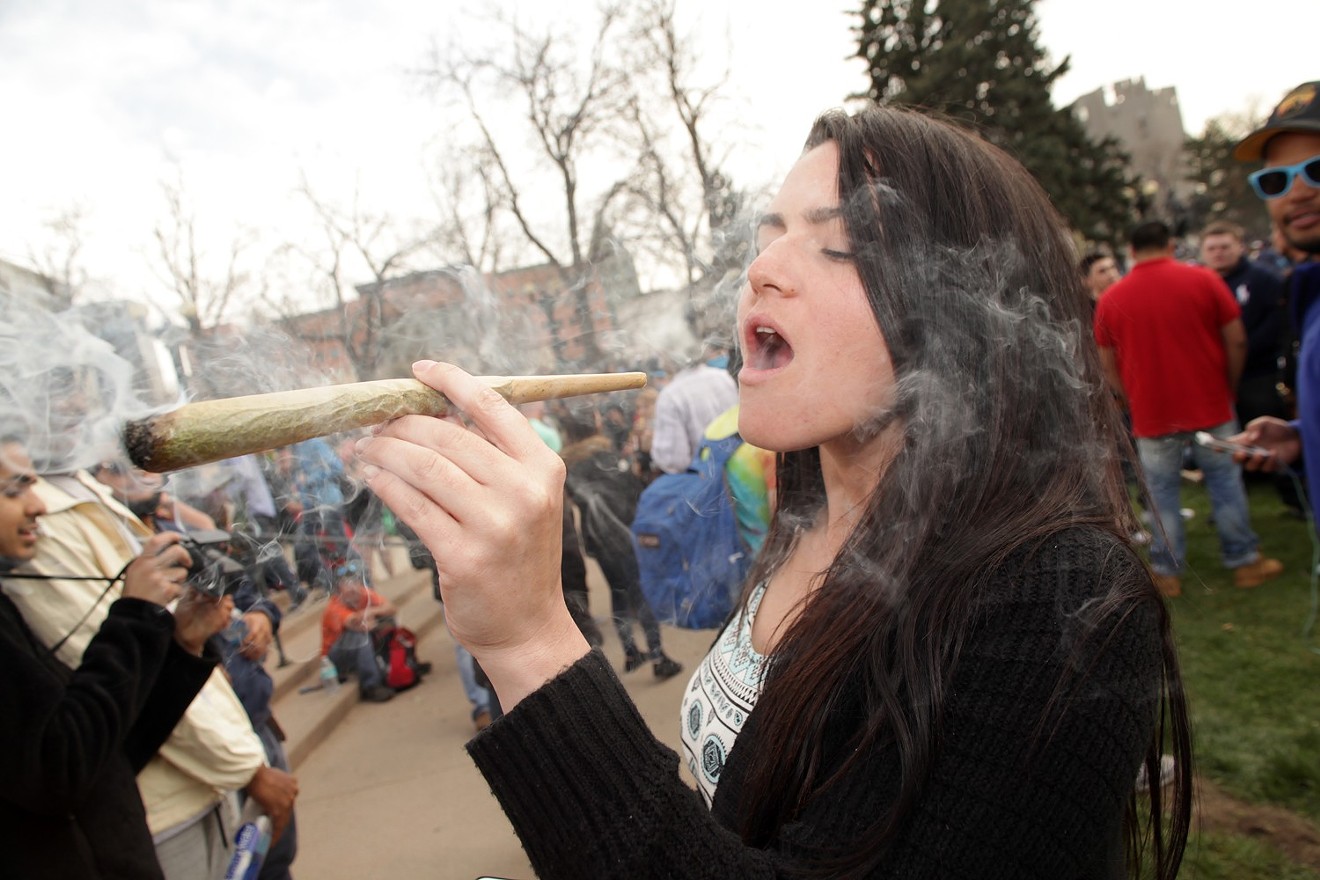 Celebrating with a comically large joint at last year's 4/20 rally. Aaron Thackeray
While Denver offers a wide range of free entertainment every week, these events will leave readers beaming with home-state pride. Whether you're guffawing the night away as comedy returns to the Squire Lounge, enjoying a free bike ride through scenic Golden or puffing on a comically large joint at the massive Official 4/20 Rally, all of these activities share a certain je ne sais quoi utterly unique to the Centennial State. Have fun while saving money at these five freebies:

James Wright
Book Release: Enduring Vietnam: An American Generation and Its War
Tuesday, April 18, 6:30 p.m.
Old Main Chapel, CU Boulder Campus
Historian, author and president emeritus of Dartmouth College James Wright examines the human toll of a controversial war in his newest book, Enduring Vietnam: An American Generation and Its War. Wright did extensive research, including 160 different interviews with survivors and their loved ones, for this book, which incorporates these firsthand accounts, finding meaning in their experiences fighting a horrific war for which meaning was in short supply. Wright's support for veterans doesn't just stop at the written word, however; he pays regular visits to convalescing troops at VA hospitals and works to provide education and counseling services for those who've served. After a reading and discussion, Wright will sign copies of his book, which will be available for purchase.

Bronze Fox
Almost 4/20 Burlesque Show
Wednesday, April 19, 9 p.m.
License No. 1
To celebrate the one-year anniversary of strutting their stuff in the Boulderado's License No. 1 speakeasy, Bronze Fox Burlesque is hosting a special free show. Arriving in high time for 4/20 eve, the Almost 4/20 show on April 19 features all the bawdy burlesque antics you'd expect as well as a cello accompaniment and live body painting. Join the Foxes (and wolves) for a delightful evening of dance, drink and perhaps even a little early 4/20 celebrating. Admission is free, but tips for the dancers are always appreciated. Visit Bronze Fox Burlesque's Facebook page to learn more.

Golden Bicycle Library
Golden Bike Library Season Opening
Thursday, April 20, 10 a.m. to 4 p.m.
Golden Visitors Center
For anyone looking to escape Denver's 4/20 debauchery or merely celebrate in a quieter and more low-key way, Golden is holding a reception to celebrate the seasonal opening of the Golden Bike Library. Enjoy refreshments, register for giveaway prizes, or hop onto one of sixty new bikes added to the Golden fleet this year. Similar to Denver's B-cycle system, Golden's Bike Library is a hit with locals and tourists alike, and the bikes are perfect for exploring the 24 miles of interconnected trails the city has to offer. Making a good deal even better: The first two hours of any bike rental are free. Visit goldenbikelibrary.com to learn more.

Official 4/20 Rallyhttp://www.westword.com/location/the-squire-lounge-5164761
The Official 420 Rally
Thursday, April 20, 10 a.m. to 8 p.m.
Civic Center Park
While even a cursory glance at the calendar will reveal a plethora of 4/20-centric events, the Official 420 Rally is the granddaddy of them all. While the current party atmosphere may obscure the rally's onetime activist roots, the freedoms that Coloradans currently enjoy owe a debt to those public-puffing pioneers. The main event this year is a free concert by trap music savant 2 Chainz, who's scheduled to take the stage around 2 p.m. (though arriving earlier is highly recommended), but delights continue all day long, from 10 a.m. until 8 p.m. Join the crowd under the smoke cloud, peruse the vendors' village, spark up with a stranger and thank Jah that you live in Colorado. Visit denver420rally.org to learn more.

For even more events in metro Denver this week and beyond, visit our online calendar.