Review: Travel Through Time With Dmitri Obergfell at Gildar Gallery

Wes Magyar
In Dmitri Obergfell’s solo at Gildar Gallery, Man Is a Bubble/Time Is a Place, the artist uses such a wide diversity of forms that he seems to be spreading out in various directions all at once. True, the pieces reveal that Obergfell is still following the aesthetic and conceptual courses he set out on several years ago; however, there are clearly some new things going on. “They’re all meditations on long arcs of time, informed by different sources,” the artist says, explaining the multiplicity.

“Portal,” by Dmitri Obergfell, corrugated steel and paint.
Wes Magyar
For example, in the sculpture “Moonwatcher,” Obergfell continues to express his interest in Greco-Roman antiquity thrust into a contemporary context, as he did so notably in his “Statues Also Die” series.

“Moonwatcher,” made of white polystyrene, was fabricated using computerized routers guided by 3-D digital files based on a classical male nude. Obergfell sees his use of existing digital files as being linked to the use of ready-made objects, a well-established art practice. Here he conceived of the figure as having voids, and it is with these open spaces and the steel tubes holding the figure together that he riffs on modernism. Thus “Moonwatcher” is meant to suggest the span from the time of the Greeks and Romans to our own day, with a layover in mid-twentieth-century modernism.

A different approach to time is conveyed by “Portal,” which is made of corrugated steel. It captures the idea of eternity: The overall shape is complex, like an island’s shoreline, and that complexity is jacked up by the peaks and valleys of the corrugation, as well as the chameleon paint it’s finished in. This kind of pigment changes color both as it follows the contours of the steel and as viewers move past it. For “Portal,” Obergfell used the type that goes from blue to purple and back again.

Strewn throughout the gallery and thrown around the base of “Moonwatcher” are what look like crushed beer cans done in the same blue-to-purple paint. The small sculptures are based on actual cans; Obergfell brings in his “passage of time” theme by transforming the ephemeral debris into something more enduring. Although these were done in resin, he says he intends to do some in bronze in the future, which would make his point even better. 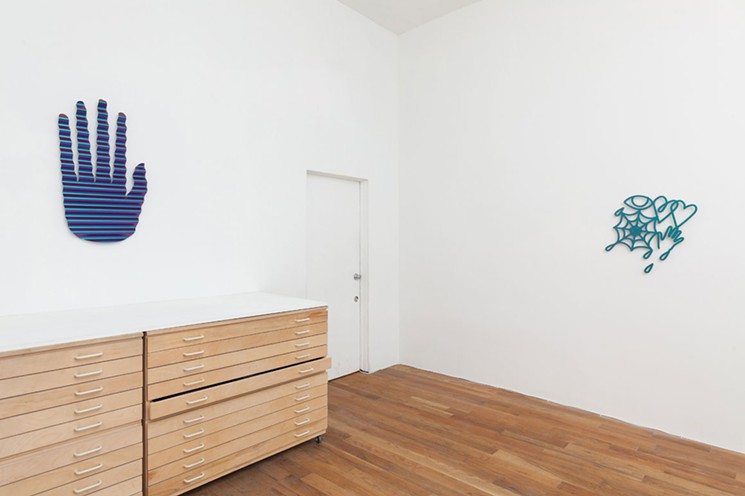 Wes Magyar
Obergfell’s Man Is a Bubble/Time Is a Place has been a hit for Gildar, so the show’s run has been extended through May 13. Gildar Gallery is located at 82 South Broadway; for more information, call 303-993-4474 or go to gildargallery.com.