“Three Women With Parasols,” by Marie Bracquemond, oil on canvas. Patrice Schmidt, Courtesy of American Federation of Arts
Over the past few years, women artists have finally been given their due, with dozens of exhibits celebrating contributions that, with a few notable exceptions, had previously been ignored. The Denver Art Museum has been a leader in the effort to right this wrong: Last year it presented Women of Abstract Expressionism, which rewrote the history of American art in the 1950s, and now it’s hosting the blockbuster Her Paris: Women Artists in the Age of Impressionism. This show is perhaps not as groundbreaking as the earlier one, because the subject of women artists in the nineteenth century has been studied for at least a generation; nonetheless, it’s a spectacular example of this trend of highlighting artists whose relative obscurity was nothing more than the byproduct of sexism.

That sexism was extremely pronounced in painting. Although a few women artists had emerged earlier, it wasn’t until the second half of the nineteenth century that a large number of European women took up painting. And the male artists were having none of it: In France, as in this country, women could be admitted to colleges, universities, even medical schools, but they were not allowed to enroll in art schools. The sticking point was the male nude model. At the time, people believed that history painting — the depictions of battlefields, warfare at sea or some other momentous event — was the most important type of art. To carry out such paintings, which typically include the depictions of many men, the prevailing thought was that only through the drawing of the male nude model could artists attain the anatomical knowledge necessary to accurately depict men in movement. Given notions about propriety during this period, it was deemed entirely inappropriate for women to be in proximity to a naked man. This was the situation at the most prestigious art school in the world, the Ècole des Beaux-Arts, until the very end of the nineteenth century. But other art schools, such as the Académie Julian, had begun accepting women decades before. 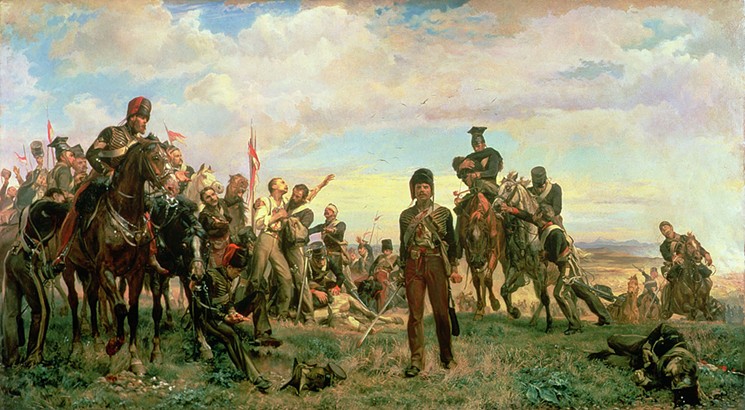 "Balaclava," by Lady Elizabeth Butler, oil on canvas.
Courtesy American Federation of Arts
The ambitious Her Paris was curated by Laurence Madeline for the American Federation of Arts; she established several pre-conditions for the show, including the exclusion of still-life painting. During the second half of the nineteenth century, women who painted often did so in their homes, and they painted what they saw in their homes. I understand Madeline’s logic — to feature the unexpected, not the expected — but I missed seeing still lifes as part of the whole. Angelica Daneo, DAM curator of painting and sculpture, hewed close to Madeline’s intentions with the local presentation. Rather than being chronological, the exhibit has been arranged to explicate certain themes, such as history painting or figural groups, including the most well-recognized of the type: renderings of mother and child.

At first Tom Fricker’s exhibition design struck me as a little too emphatic, with two anterooms of graphics right at the start, but as the show unfolded, I realized it was brilliant. This change of heart occurred in the gallery that takes on the art-school issue. Small, freestanding canted walls that suggest easels are ceremoniously arranged on either side of a central, mural-sized canvas: Marie Bashkirtseff’s “In the Studio,” which beautifully depicts a group of women working in a formal studio setting, sketching a partly draped young boy. On each of the wall-easels is a painting by a woman that shows a woman working as an artist. "In the Studio," by Marie Bashkirtseff, oil on canvas.
Dnipropetrovsk/ Bridgeman Images, Courtesy American Federation of Arts
As indicated by the prominent placement of the Bashkirtseff, the show’s subtitle — “Women Artists in the Age of Impressionism” — is misleading, but intentionally so. Some of the artists are impressionists, but most are not; the show includes not only academic painters such as Bashkirtseff, but realists and others. The word “impressionism” has a lot of cachet with the art-viewing public, however, and that misdirection clearly works, since the show has attracted a throng of visitors. 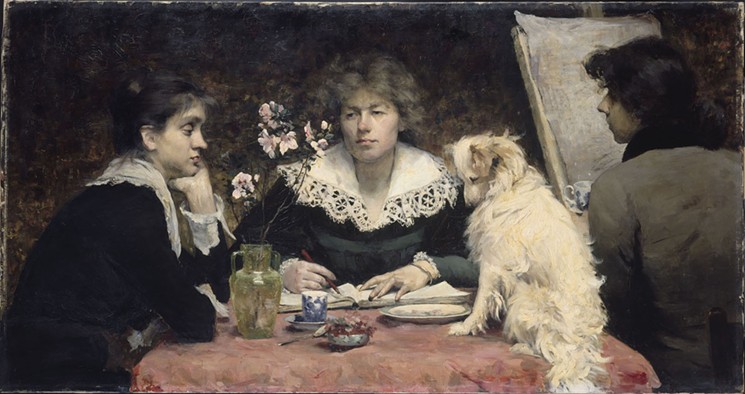 "The Friends (Les amies)," by Louise-Catherine Breslau, oil on canvas.
Courtesy American Federation of Arts
Like Bashkirtseff, a Paris-trained Ukrainian artist, most of the women shown here are almost unknown; many should be far more famous than they are. That’s definitely true of Hannah Hirsch Pauli, whose “The Artist Venny Soldan-Brofeldt” is absolutely gorgeous: It depicts her friend, a sculptor, sitting on the floor of her studio wearing her work clothes. Cecilia Beaux’s work also stands out, with pieces such as “Ernesta,” which shows a child walking beside a nanny. The unusual composition centers on the child; the top half of the nanny’s body is cut off outside the picture plane. The painting has a very John Singer Sargent-esque quality, as does another Beaux, “Sita and Sirita,” of a seated woman in a white gown with her cat. Realistic paintings from later in the nineteenth century, such as Pauli’s and Beaux’s, indicate a keen awareness of impressionism, especially in the informality of their brushwork — though technically speaking, they are not impressionist paintings. 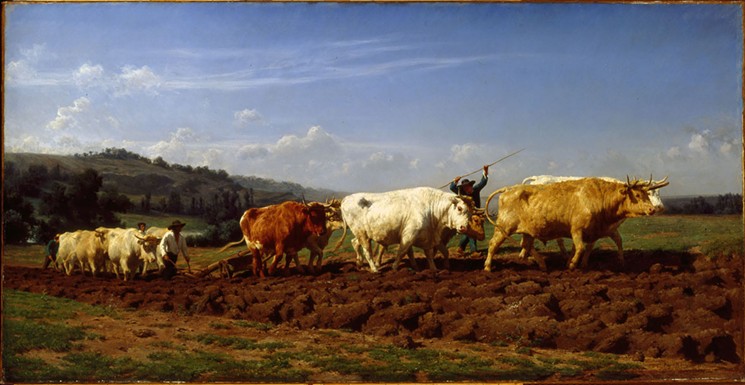 "Plowing at Nivernais," by Rosa Bonheur, oil on canvas.
Courtesy American Federation of Arts
A handful of artists in Her Paris are already famous, if not household names. Madeline included only a single piece by Rosa Bonheur, a master of realism, but it’s a knockout. “Plowing at Nevernais,” a heroic depiction of a farmer and a team of cattle, has an outstanding composition and is exquisitely rendered. Despite widely held prejudices against women artists, Bonheur was able to find fame and fortune in her lifetime; I guess the men who were her contemporaries just couldn’t deny that she was a genius, at least not with a straight face. 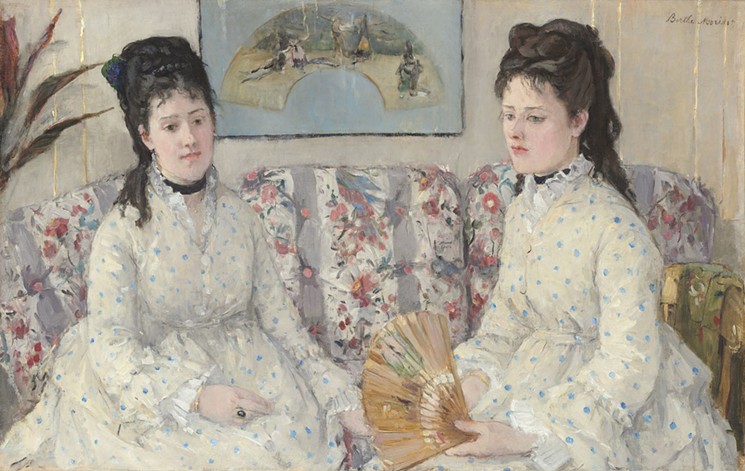 "The Sisters," by Berthe Morisot, oil on canvas.
Courtesy American Federation of Arts
Somewhat well-known in their time — but famous in ours — is a trio of impressionists: Mary Cassatt, Berthe Morisot and Marie Bracquemond. Each is represented in some depth, but since the show is organized thematically, their works are scattered throughout. While I would have preferred individual groupings, on the plus side, Madeline was able to score some of the most important examples of their respective oeuvres. An uneven painter, Cassatt is represented by only her best efforts, such as “Portrait of an Elderly Lady in a Bonnet” and “The Reader,” both of which are magical. Morisot was more consistent and embraced impressionism early. A stunning example of this is “The Sisters,” showing two similarly dressed young women sitting on a floral couch; the details are smeared and slapdash, and the piece has a Japanesque mood, with one fan on the wall and another held by one of the women. Japanese influence was an important component of French art during that era, and it’s also seen in one of the best-known works here, Bracquemond’s “Three Women With Parasols,” which shows three women wearing pastel gowns, two of them holding parasols. More mainstream from an impressionist perspective, and also world-renowned, is “On the Terrace at Sèvres,” in which Bracquemond depicts her relatives in an atmospheric environment. "On the Terrace at Sèvres," by Marie Bracquemond, oil on canvas.
Courtesy American Federation of Arts
Although it opened last month, Her Paris is definitely a gift for art lovers this holiday season.