Audra Stachnik of Hott Pink Matter in her own design. Audra Stachnik
Every new fashion designer hopes for that one big break. For Audra Stachnik of Hott Pink Matter, Denver Fashion Week is just that. After creating her designs for only a couple of years, she earned a prime runway slot at Denver Fashion Week, which runs Sunday, April 3, through Sunday, April 10, in two locations this year: the Forney Museum of Transportation and Void Studios.

Being added to the designer lineup is a clear credit to Stachnik’s flair for innovative designs, use of sustainable materials and creative edge. Stachnik describes her Hott Pink Matter collections as streetwear inspired by her own personal preferences as well as asking people around Denver’s art and music scenes what they want to wear. Her pieces include corsets, skirts, baggy jackets and pants cut in a variety of silhouettes. What really catches the eye is the mix of colors and textures, pieced together in interesting ways.

The desire to design fashion came to Stachnik through dance. “I was a competitive dancer, doing ballet, jazz, tap and hip-hop from when I was three to fifteen years old," she says. "I would design my dance costumes and hand-stitch pieces of fabric together. It was always something I really loved."

Stachnik left the dance world in her teens because of long hours of rehearsals and competitions, which took a toll on her mental health. She reached a point where she felt lost.

“Quitting is hard because it’s your whole life," she says. "I spent about five years not knowing what I wanted to do.”

When the pandemic hit in March 2020, she had been waitressing and lost her job. That’s when her creativity rose up to fill the time. “I tried a few things like wire wrapping and painting, but nothing stuck," she recalls. "Then I bought a cheap Singer sewing machine and found all these YouTube videos to learn to sew, and free patterns online to practice with.” Stachnik was able to claim unemployment and spent it on supplies. “I started thrifting because that’s all I could afford, and I just practiced.” 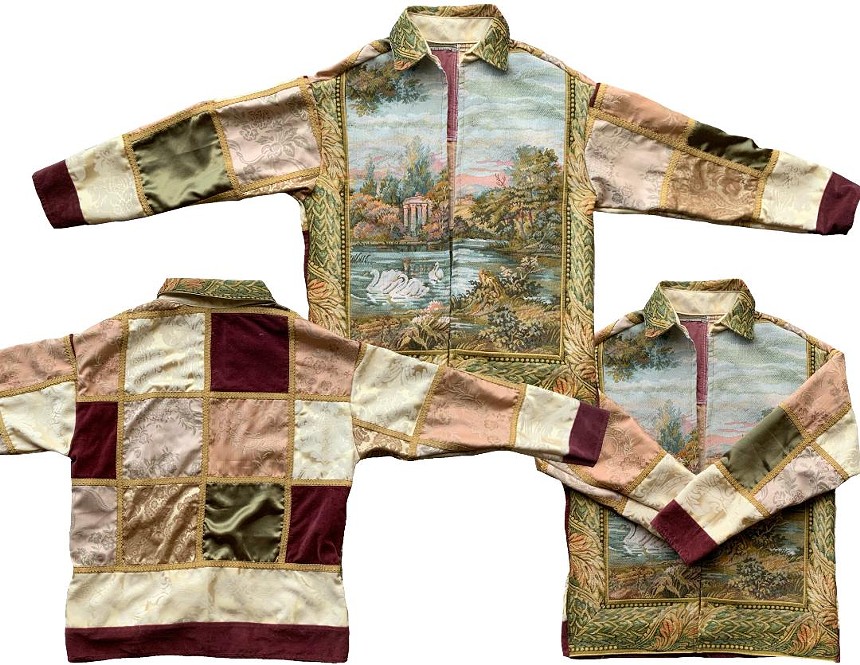 Hott Pink Matter Design
Audra Stachnik
The combination of thrifted fabrics makes each garment one-of-a-kind, and the sustainability factor of repurposing existing materials is not lost on her.

“It feels really good knowing I’m not creating a demand for new textiles when there is already so much out there," she says. "I’m all for little differences making a big difference and implementing that into clothes.”

Stachnik moved to Denver from Grand Rapids, Michigan, in the summer of 2020 after attending a Flume concert at Red Rocks in 2019.

“My friend and I drove out, and we just fell in love with Denver," she explains. "It’s such a fun, colorful city. There’s the art scene, the music scene and the mountains. After our second day, we knew we had to move here!”

While finding their way in a new city, tragedy struck. Stachnik suffers from superior canal dehiscence syndrome (SCDS), an abnormal opening in the bone that covers the superior semicircular canal of the inner ear that can cause problems with hearing and balance. She says the condition makes her prone to fainting if she hears a loud noise.

In October of 2020, Stachnik fainted in a post office and struck her head on the concrete, which left her with a severe concussion. While the accident was serious, she marks it as a blessing in disguise and a turning point in her decision to create fashion.

“While I was recovering, all I could do was rest," she says, "but I got so many ideas! I felt like it was time to give it my all, and I realized how bad I wanted to do this.” Once recovered, she started attending local artist events. “I wanted to see what people liked and figure out what I wanted to make,” she says.

Hott Pink Matter Design
Audra Stachnik
Stachnik's determination led to selling her early creations at the RiNo Showcase last year. “I was able to see if could really sell my stuff," she says. "I ended up selling quite a bit! That was a real confidence booster.”

She currently sells her clothes at Universe on South Broadway, with plans to sell at Spectra Art Space and launch her own website in April. She landed a prime spot on Saturday, April 9, at Denver Fashion Week by sheer persistence.

“I saw they did a vintage show last year. I messaged them a couple of times and didn’t hear back. Then they opened up for last-minute designers, and I applied. They replied right away. I was so nervous, I wanted it so bad!” she exclaims.

Hott Pink Matter Design
Audra Stachnik
Her excitement for her first fashion show is palpable; a huge smile stretches across her face as she talks about preparing for her first fittings and first time working with hair and makeup artists to complete the looks for her collection. She says she plans to show a lot of angel themes, faux fur, corsets and skirts that create a romantic look “It will be fun, going-out-at-night clothes,” she explains.

She’s also looking to some of her favorite designers — Alexander McQueen, Vivienne Westwood and Thierry Mugler — for inspiration.

“I watch their runway shows online and see how they do things, and I’m thinking about what music I want to use," she says. "I try to follow good fashion. I know if I work harder, I can make something to that standard one day.”

She adds that right now, she’s just happy to get her foot in the door: “I’m just so, so excited!”

Hott Pink Matter, Denver Fashion Week, 7 p.m. Saturday, April 9, at Forney Museum of Transportation, 4303 Brighton Boulevard. Find tickets, $40-$120, and more information at denverfashionweek.com.
KEEP WESTWORD FREE... Since we started Westword, it has been defined as the free, independent voice of Denver, and we'd like to keep it that way. With local media under siege, it's more important than ever for us to rally support behind funding our local journalism. You can help by participating in our "I Support" program, allowing us to keep offering readers access to our incisive coverage of local news, food and culture with no paywalls.
Make a one-time donation today for as little as $1.