Peter Hurley sits back to scrutinize his work in the late morning sun. Amanda Pampuro
What would the most influential classical composer in history say if he heard the greatest jazz musicians of the 21st century?

This thought experiment is playing out in Englewood, where impressionist artist Peter Hurley has been commissioned to paint a fence.

“Look at him: He’s skeptical. He’s listening intently,” Hurley says late one morning, meeting his six-foot-tall Beethoven’s brooding gaze. “He wants to make everyone in tune.”

Inspired by Hurley’s love of album covers, the painting shows pianists Thelonious Monk and Oscar Peterson grooving with Charlie Parker on sax, Miles Davis on horn, B.B. King on Lucille, Charles Mingus on bass and a dozen other legends performing the greatest rendition of “Round Midnight” the world never heard.

It’s Hurley’s first mural in Denver on his first visit back to the city where he studied art more than forty years ago, when Westword was in its infancy and Rocky Flats was making alarming headlines.

With the vague idea that he wanted to be an artist, Hurley hitchhiked to the Mile High City in the late 1970s to attend what is known today as the Rocky Mountain College of Art + Design. Originally taught out of an old Victorian off Colfax Avenue, the art school was the improbable dream of Phillip Steele, a successful commercial illustrator and romantic obsessed with the human form. 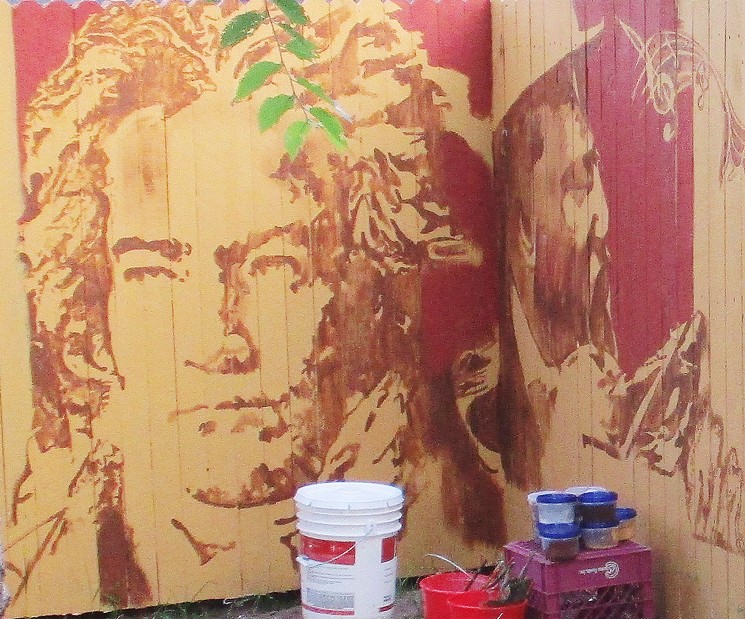 A six-foot tall portrait of Ludwig Van Beethoven listens, with intrigue and skepticism, to Thelonious Monk's "Round Midnight."
Amanda Pampuro
“He was a wonderful man, a great family man, and they all indulged some of his bad habits and all of his good habits,” Hurley remembers. “Every day after school, he’d go into his little studio, he’d pour himself some whiskey, and he’d draw nude figures. ... He had thousands of figure drawings, this precise size, always stacks and stacks of them. It was his love of the figure that so permeated the school. That’s what was so inspiring.”

Where high-rises now tower over the edge of Cheesman Park, Hurley shared a house with an aspiring political reporter and made ends meet by driving a bus for the new Cherry Creek High School. He attended the second inception of the art school, with a class of 100 students in a facilities building with large studio space. Now in his late sixties and a former arts teacher himself, Hurley regrets having been a testy student, but also says he admired his fine-arts teacher Richard Colvin so much that he wanted to push his buttons.

On a cedar fence in Englewood, the blues great B.B. King grooves on Lucille. He is joined on the left by Sidney Bechet and Sonny Rollins – the only living artist depicted on the wall. On the right are drummer Elwin Jones and flutist Eric Dolphy.
Amanda Pampuro
“Peter was not only a smartass, he was also smart,” Colvin recalls. “He could be an asshole with a wink in his eye. Even intimidating at times. I think it was because he was taller than me.”

Colvin owned Richard Colvin Fine Art Restoration in Montclair for many years. He and his analysis of the nineteenth-century abstract-impressionist Edgar Degas inspired Hurley then and now.

“Peter would question everything 'Degas.' He needed to know and would question me at every turn. Hell, this is a teacher's dream. I thought I had really struck a chord here,” Colvin says. “Needless to say, Peter was a challenge and would send me researching again and again. I wasn't about to try and make up my own stories about facts.”

Best known for his dancers, Degas also painted orchestra pits and racetracks — always catching moving figures mid-stride and off-guard. “They were really kind of off-kilter, which was new at the time,” Hurley says. “[Degas’s] figures would be cut off at the edges, and there were kind of unorthodox ways of seeing, so that strain sort of came through all of our work, and I was glad to inherit it from Richard." 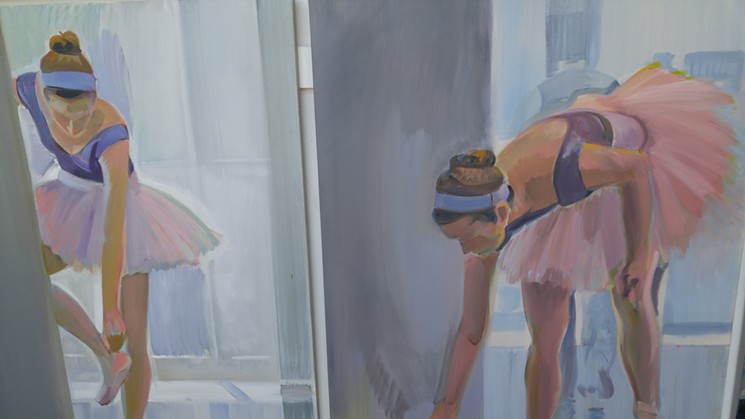 One of Peter Hurley's oil paintings, inspired by Edgar Degas, of ballerinas rehearsing.
Trisha Ricketts
“Technique-wise, I think the masters like Caravaggio and the guys I’m just crazy about looking at, that degree of realism and that finish, I’ve always been attracted to, but I’m also like a rough impressionistic guy, so there were times when I tried to go into that beautifully finished state and just couldn’t get there,” Hurley admits. “I’ve had to be more comfortable in this raw, kind of impressionistic way of painting figures.”

While Hurley tends to paint with a smoother, more simplified brush, he continues to practice much of what Degas preached — including his subject matter. In fact, when he isn’t being influenced by a client, Hurley turns back to dancers. “I kind of took the whole Degas thing literally,” he laughs, noting that he once served as resident visual artist for the Joffrey Ballet in Chicago.

Reflecting on his process, Hurley says painting allows him to voyeuristically experience what his subject experiences, whether it’s dancing or playing improv.

One July morning in Englewood, artist Peter Hurley brings tenor-sax player Charlie Parker to life, as the dynamic John Coltrane looks on.
Bob Kahn
“I think if anything, I do try to just capture what the music feels like for me, and that’s my homage for all of the jazz musicians who I’ve enjoyed over these years,” he adds.

In Chicago, where he currently lives, Hurley’s murals in the East Bank Club and Lurie Children's Hospital make him one of the city most visible artists.

Now the metro area has a Hurley mural of its own — a cool-toned orchestra of acrylic jazz legends obsessively scumbled over a rough cedar fence. Employing Alexis Catala and Izaac Tafoya, two apprentices from his alma mater, and a projector in place of fresco, Hurley is transforming a quiet suburban back yard into a roaring jazz club.

Want to see the mural for yourself? Hurley is hesitant to disclose the precise address. But head down South Ogden Street in Englewood; you’ll know you’re heading in the right direction when you spot the larger-than-life keyboard down an alley.

Hurley will know when the painting is complete, he says: “I’ll have all the figures in place, and there’ll be some element I want to add — some splash of color or abstract element that will sort of dance throughout the thing.”

And that’s when the players come to life.
KEEP WESTWORD FREE... Since we started Westword, it has been defined as the free, independent voice of Denver, and we'd like to keep it that way. With local media under siege, it's more important than ever for us to rally support behind funding our local journalism. You can help by participating in our "I Support" program, allowing us to keep offering readers access to our incisive coverage of local news, food and culture with no paywalls.
Make a one-time donation today for as little as $1.