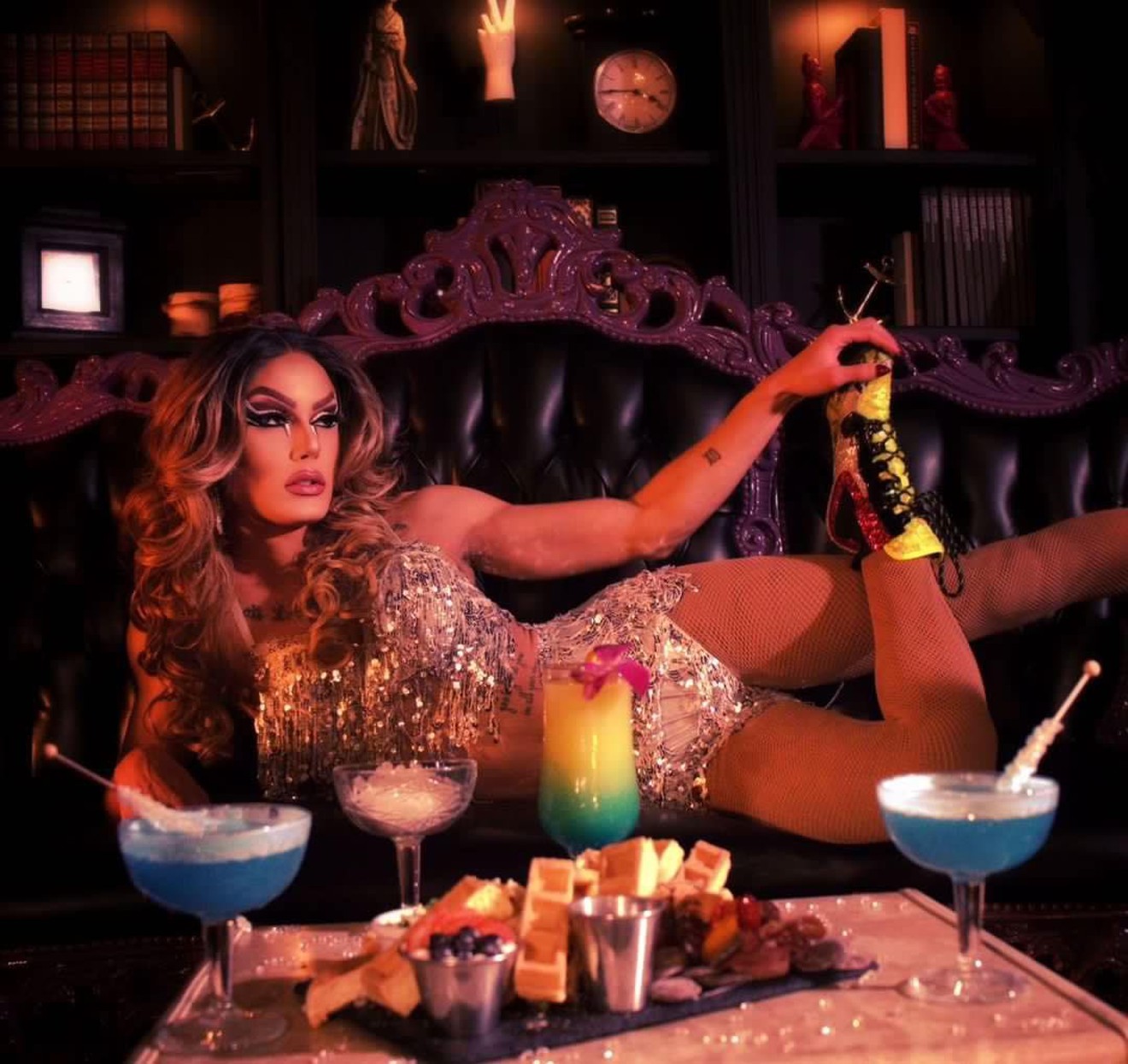 Samora Kash aims to fill the need for more open-stage shows in Denver. Rare by Grist
Denver drag queen Samora Kash (Cameron Rogers out of drag) accomplished more in 2022 than most people do in a decade. She only started performing in 2021, but last year she produced more than five of her own shows, appeared four times in the monthly Drag Nation event at Tracks, performed on the main stage at Denver PrideFest, became a favorite at all-ages shows and children's birthday parties, released the single "JUMP IN" with Black Mazerati, and was named one of the Fifteen Freshest Faces of Colorado drag.

"To be honest, I didn't realize that I had really stepped my heels, so to speak, in almost every venue in Denver so far, some of them being straight venues. So I feel like I got to do way more last year than I ever dreamed of doing," says the 29-year-old queen. She premiered her latest endeavor in December with an open-stage night called Drafted, which takes place the third Thursday of every month at Denver's only gay sports bar, Tight End. We chatted with Kash and Tight End general manager Justin Laine to get the scoop on Drafted ahead of the upcoming show on Thursday, January 19. Drafted continues Glow Up's mission to support local queer nonprofits.
Brian Degenfelder
Laine and Kash first met at Lucid, where Laine was working and Kash was hosting a weekly open stage night called Glow Up, which also functioned as a fundraiser for local nonprofits. Glow Up ended when Lucid closed abruptly last August, but the two stayed in touch. And when Laine was hired at Tight End in October, he saw an opportunity to revive the concept in a new venue. "Since coming on, I wanted more drag. Samora obviously was the first person I reached out to, because of our history, friendship, working relationship, everything. There was no question in my mind as to who to go to," Laine recalls.

"Justin and I both have the same mission," Kash adds. "We still wanted to keep raising money for different nonprofit organizations. This mimics [Glow Up], but is a whole different rebrand of that show. That's where Drafted came about, and the whole point of the name is that we're trying to draft new talent."

Any drag artist is invited to perform at Drafted, as long as they show up dressed and ready to go by the 10 p.m. showtime, with their music either on a flash drive or queued up on Spotify. While some people send Kash their music ahead of time, Drafted is designed to encourage last-minute participants, so no advance notice is necessary. Kash opens each show with her own performance, then passes the baton to a special guest performer.

"For this show specifically, I always have a guest with me. The first one in December was with  Jessica L'Whor, and this month it will be Ariez Iman. My whole thought process was that certain entertainers in Denver were with me a lot at Lucid, so I wanted these first few months to include those entertainers, then I'm going to start reaching out to others as well," she explains.

Depending on how many aspiring drag entertainers show up each week, they're split into two acts, with an intermission in between. And Drafted is as accessible as possible for anyone who wants to try their hand at drag — there's no entry fee or cover. "Tight End is a no-cover bar. That's kind of our thing. Even Pride days, we don't have a cover," Laine notes. "I think that helps entice people to come, and to perform."

Kash, who also hosts Cherry Pop, a monthly open-stage night at Hamburger Mary's, recognizes just how important these shows are for nurturing new drag talent. "There's such a need — not just in Denver, but in Colorado in general — for open-stage shows. I can't tell you how many people are like, 'There's not enough of these,'" she emphasizes. Justin Laine (left) and Samora Kash became friends while working together at the now-closed Lucid.
Courtesy of Samora Kash
Kash was fast-tracked into the Denver drag scene because she already had relationships with several established performers willing to give her a shot, so hosting open-stage nights is her way of paying it forward. At Drafted, not only do new entertainers get the chance to cut their teeth on stage, but they also get to network with people like Kash, and the ensuing conversations could potentially lead to larger, paid bookings. "I've seen what a difference it makes. To see the entertainers that came to Lucid getting on fliers at all these bigger venues, it's huge," she says. "I feel like sometimes when they're starting out, they think, 'Well no one is really paying attention; this is just an open stage night.' But what I try to get them to understand is [that] it can lead to much bigger things if you really put the time and effort into it."

Despite its sporty name, Drafted is one of the few opportunities for up-and-coming drag entertainers that is not a competition; it's free space for them to explore and develop their artistry. There are no rules, no restrictions, no rigid categories and no rivalries — just camaraderie and celebration of each other. "I feel like a lot of times entertainers feel like, 'I have to be a queen, I have to be a king, I have to fit a mold to make it or be any kind of entertainer in this city' — or whatever city," Kash says. "But what I love about doing these open-stage shows is it gives you a chance to just be whoever you want to be. You don't have to fit in that box. At the end of the day, it's giving someone a space to be whatever the art form looks like to them." Adds Laine, "You really get to see these performers grow and find their niche."

But the goal of Drafted is bigger than just uplifting individual performers. As with Glow Up, Drafted doubles as a way to raise money for local nonprofits that benefit the queer community. Kash always holds at least two donation rounds throughout the night for whatever organization she's chosen to work with that month. "We are all looking to figure out ways to make change or make a difference in our community, and I think there's not enough work, ever, that can go into supporting these local nonprofits," she says. "For me, it's just about being able to support them in any way I can, and using my platform to do that. As I used to say at Glow Up, none of us glow up until we all glow up together."

Laine agrees, and points out that after the recent mass shooting in Colorado Springs, the need for community support is greater than ever. "We started talking about this just a couple weeks before the tragedy at Club Q, so I think that just kind of confirmed that this is something we need as a community," he says. "All of our nonprofits that we've worked with are LGBTQ community-based. Now more than ever, helping these organizations helps us all as a community." 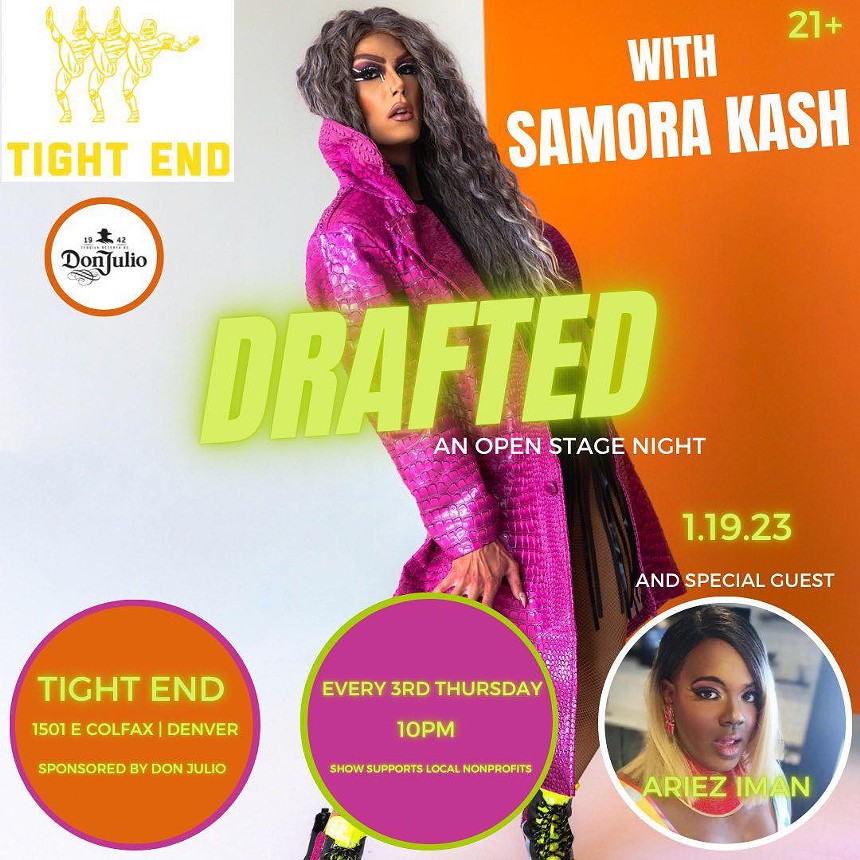 Samora Kash wants YOU to give drag a try.
Courtesy of Samora Kash

This month, Drafted will be raising money to go toward the medical bills for Mike Bomberger, a beloved local drag photographer who is currently in a coma after being struck by a car.

As far as the future of Drafted goes, Laine and Kash hope that the show draws enough of a crowd to ultimately become a more frequent event. "The goal would be to eventually get back to being weekly or biweekly," says Laine.

"That's always a topic to be discussed. Obviously we just started this last month, so it's kind of this trial-and-error to see if it picks up," Kash explains.

By bringing a monthly show to Tight End, Laine also aims to expand the bar's clientele beyond queer sports fans. "We're a gay sports bar, but the first part of that is we're gay; we're queer. That's why we wanted to bring this here," he says. "Not only to help the community, but to bring in other parts of the community other than just gay football fans. Hopefully, Samora and Drafted will break the mold of what Tight End has been."

Drafted, 10 p.m. Thursday, January 19, Tight End, 1501 East Colfax Avenue. Admission is free. For more information on Samora Kash, visit her website.
KEEP WESTWORD FREE... Since we started Westword, it has been defined as the free, independent voice of Denver, and we'd like to keep it that way. With local media under siege, it's more important than ever for us to rally support behind funding our local journalism. You can help by participating in our "I Support" program, allowing us to keep offering readers access to our incisive coverage of local news, food and culture with no paywalls.
Make a one-time donation today for as little as $1.