Review: The Secret Garden Is in Full Bloom at the Denver Center 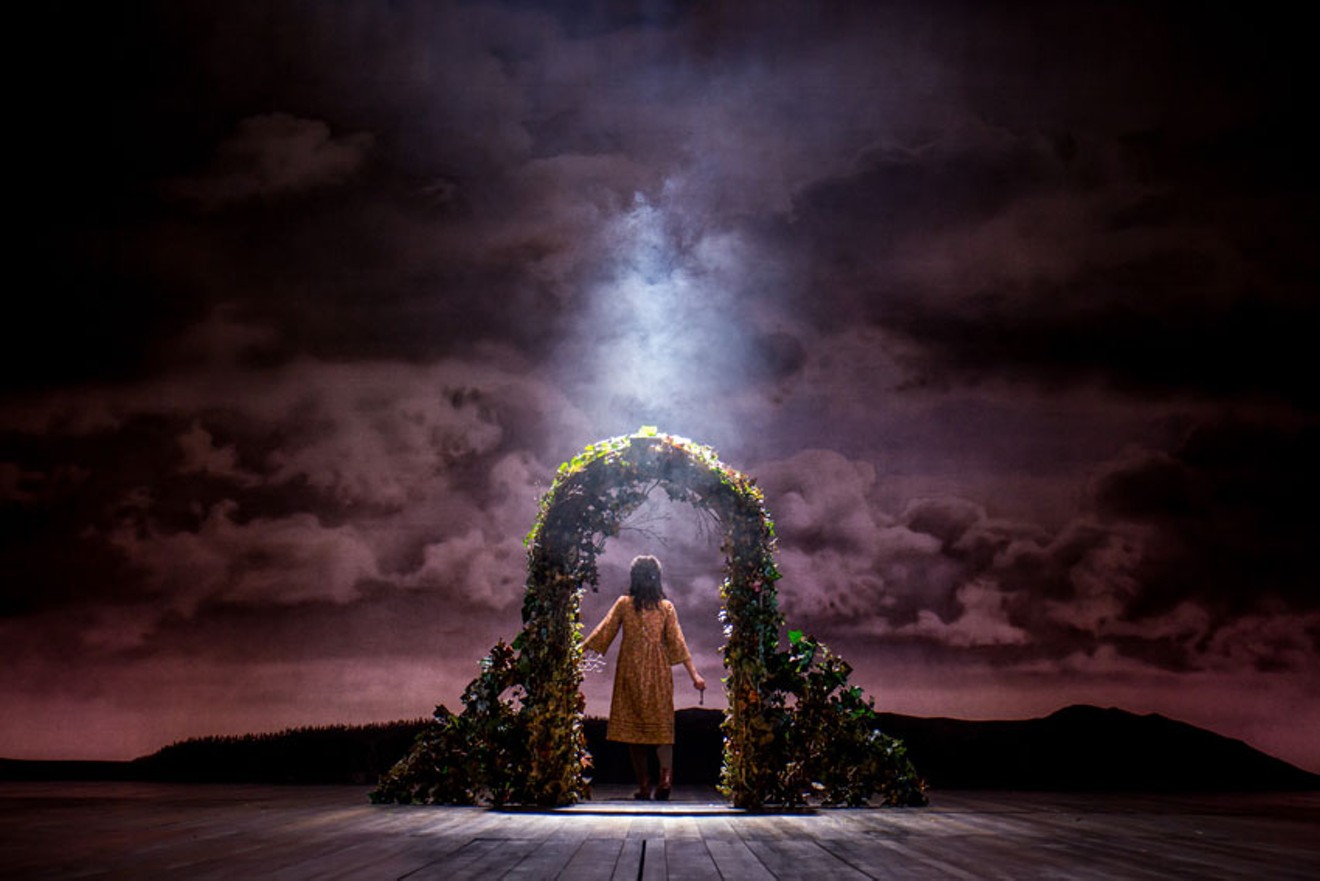 Zoe Manarel in The Secret Garden. AdamsVisCom
The Secret Garden, now playing at the Denver Center for the Performing Arts, is a gorgeous show. A musical version of Frances Hodgson Burnett’s children’s story, it is filled with visual and aural riches. The action is set in the bleak Yorkshire moors, and the play is in part a celebration of the healing power of nature: a robin imparts crucial knowledge, and Mary, the young protagonist, discovers that at the heart of a dead, dry garden, there’s a touch of green that can be nurtured into bloom. So while it’s a bit odd that the sets are stylized and artificial, often looking like pages from a child’s picture book — the black-and-white outline of a tree, perhaps a pomegranate, in an early scene, and later a colorful tree that resembles a perch for the various birds of “The Twelve Days of Christmas” — designer Wilson Chin’s images are absolutely stunning, and work with the rest of the production.

The costumes, designed by David Toser, are elegant, and the people handsome. There’s no vocal weakness in the entire cast, but Sean Palmer, as humpbacked Archibald Craven, Mary’s uncle and the father of young invalid Colin, is particularly strong, as is Carey Rebecca Brown, with her rich, beautiful voice as the ghost of Archibald’s dead wife, Lily. Michael Halling sings well in the strangely ambiguous role of Dr. Neville Craven, Archibald’s brother, who seems to have been introduced to thicken the rather thin plot and is either completely evil or just a touch evil and blind to his own darkness. His duet with Archibald, “Lily’s Eyes,” is a showstopper. Other fine songs include “I Heard Someone Crying,” “A Bit of Earth” and “Come to My Garden.” Zoe Manarel as defiant Mary and Sean Reda as Colin, an angry, self-pitying invalid whose undefined physical ills seem caused by his father’s grief and withdrawal, both have presence and energy.

Mary grew up in India, the daughter of neglectful colonialist parents. She’s no angel, but rather an angry, rude and arrogant child who treats the Indian staff like dirt. Orphaned by a cholera outbreak, she lands at the gloomy Yorkshire manor of equally gloomy hunchback Archibald. In Burnett’s Little Lord Fauntleroy, it’s the young lad who redeems his crusty guardian, but Mary’s redemption comes from the servants: chambermaid Martha (a delightful Emily Walton), the gardener, Ben (Adam Heller), and Martha’s brother Dickon, a charmer as played by Liam Forde, but perhaps a touch too sprightly for a Yorkshire lad connected with the deep mysteries of the earth.

The plot is sometimes sketchy and sentimental. The same Uncle Archibald whose cruelty and indifference confined Colin to his room for a decade rapidly reveals a soft heart; Mary gets into the garden far too easily, and that garden’s transformation appears to just happen rather than require dedication, skill and dirty hands.
Thematic depth is added by an innovation from writer Marsha Norman and composer Lucy Simon: ghosts, lots of ghosts. Ghosts of Mary’s dead parents, their Indian staff and lovely Lily. They’re an evocative chorus, though the scene in which they perform a voodooish dance along with Mary as Colin struggles to find his legs and rise from the wheelchair struck me as pretty dopey. Brown’s melodious singing as omnipresent Lily is always welcome, but every once in a while I flashed on Noel Coward’s pretty, sexy Elvira in Blithe Spirit, come to sabotage her onetime husband’s marriage and take him with her into the underworld, and thought how much more interesting The Secret Garden would be (it does drag a little in the second act) if Lily were an evil spirit attempting to lure the living with her exhortations of “Come Into My Garden,” rather than a perpetually sweetly loving presence.

Even so, there’s a lot of pleasure, charm and delight here. After the performance, I saw a girl of about five skipping out of the restroom, singing a wordless song. She was full of zizzing energy, her voice was light and sweet, and when she stopped singing to announce firmly, “That was a very fine show,” even the sourest critic had to agree.

The Secret Garden, presented by the Denver Center for the Performing Arts Theatre Company through May 28, Stage Theatre, Denver Performing Arts Complex, 303-893-4100, denvercenter.org.