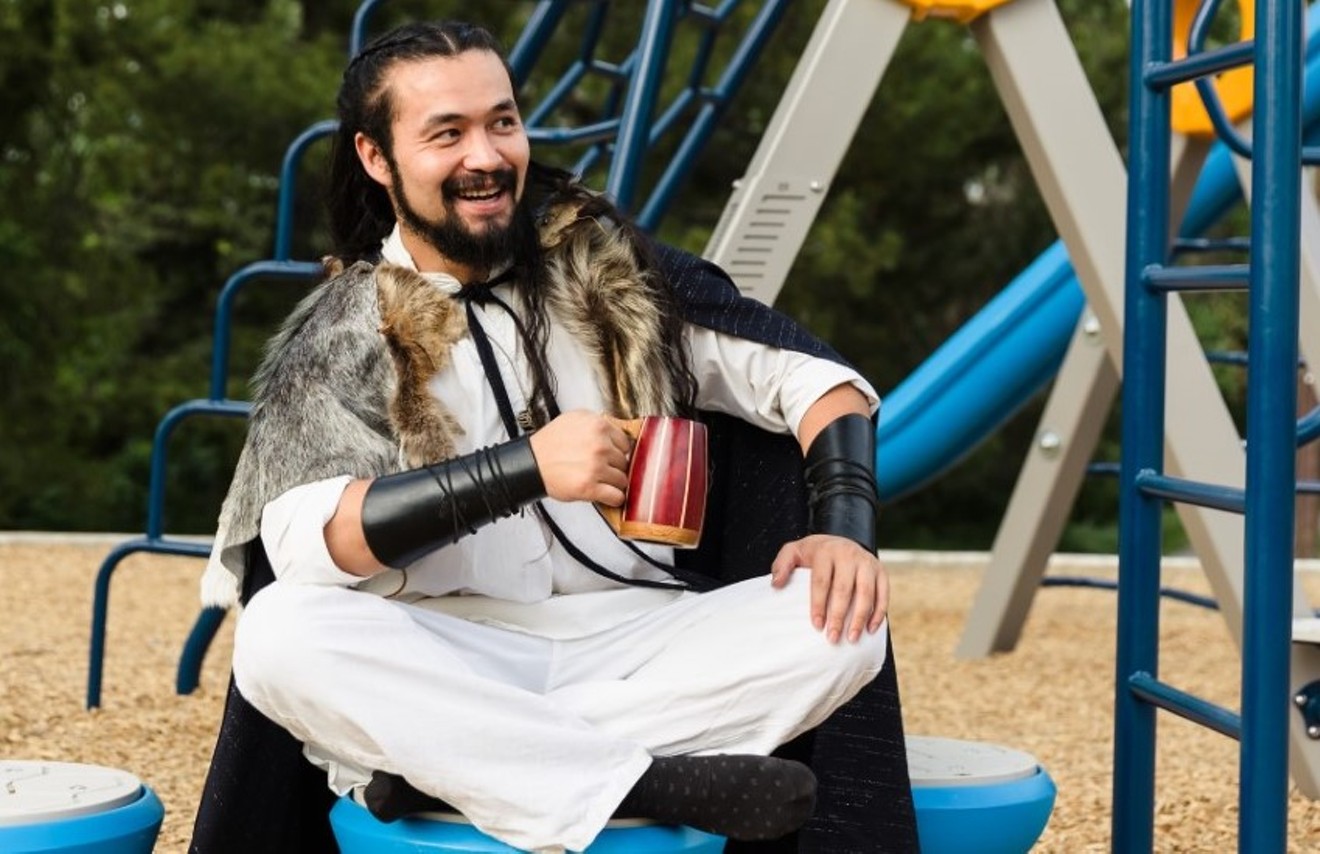 Ryan Foo is ready for adventure. Or beer. Actually, both. The Jo(e)s Photography
Colorado creative Ryan Foo is back again for more fun and games, Denver style — this time with a sword-sorcery-and-stout (or pale ale, or lager, or whatever your beer-loving little gamer heart might crave to wet your whistle) theme. He’s teaming up with Denver’s Rainbow Militia, which brings its own sense of circus arts to the endeavor. The result: Beer Quest.

“Summon 4-6 of your most capable friends to aid Drinkledore in a quest to save his beloved dragon,” invites the website, describing the immersive experience in downtown Denver that runs three weekends starting July 15.

We caught up with Foo over email to learn more about Beer Quest. As with any role-playing game, the real treasure is friendship and adventure — though in this case, it’s friendship, adventure and beer.

Westword: So, Beer Quest. How did the idea for this come about?

Ryan Foo: Well, I knew that I wanted to do another "game-ified event" after IllFooMinati, and I've been sitting on an adventure in a beer garden with a friend for a little while. The inspiration to go as 8-bit as we did is credited to Rainbow Militia, as we worked out a lot of the creative work together. They really helped us build the world we'll see in July.

Give us an idea of what participants can expect from the experience. It sort of sounds like a LARPing SCA sort of live-Dungeon thing, plus beer (so: all kinds of awesome).

I wouldn't call it LARPing, but you'll be doing all kinds of things in the land of Beer Quest. I'd say that if you're a nerd of any ilk, you'll love it — and if you just love beer, it'll still be a great time. We've done our best to balance those things.

What video games — if any — inspired this live-action game? The 8-bit pixel nature of the concept suggests some serious gaming backstory...

Hahaha! All of them! I love games. Games as a philosophical concept are what inspired this — though there will be plenty of allusions to popular games and culture in the world of Beer Quest. Influence-wise, the mechanics of the world come from RPGs like Skyrim or World of Warcraft. But some teach a lesson on storytelling itself, and for that, I'd credit games like Divinity: Original Sin, BioShock Infinite and The Witcher.

What can participants expect from the event?

To be tested. To be guided. But mostly, expect to explore! The experience is "open-world," so you can really do whatever you want to do. There are four Kingdoms to visit, dozens of quests, hidden Easter eggs, and a final boss fight which is an actual video game. And you'll win beer and dragon scales along the way.

About it being an "open-world experience"…how does that video-game term translate into the real world?

Mostly, that we aren't forcing you to do anything. There will be a large open area with plenty of things to do and reasons to level up, but we aren't guiding you from scene to scene like in a traditional video game. So the name of the game becomes exploration, where you get to tour the open world at your own pace. Plus, there is more to do than most folks will be able to accomplish in one go, so anyone that comes more than once will have pretty radically different experiences.

Player rewards are either beer or "dragon scales," which are the in-game currency. What sort of items will the scales be able to purchase?

All kinds of stuff! Everything from pixel-apparel/weapons, to decorations for their “Trusty Shield” from Pixel Blitz. And, of course, beer! It's also possible to bribe the in-game characters with dragon scales…but don't tell anyone I said that. 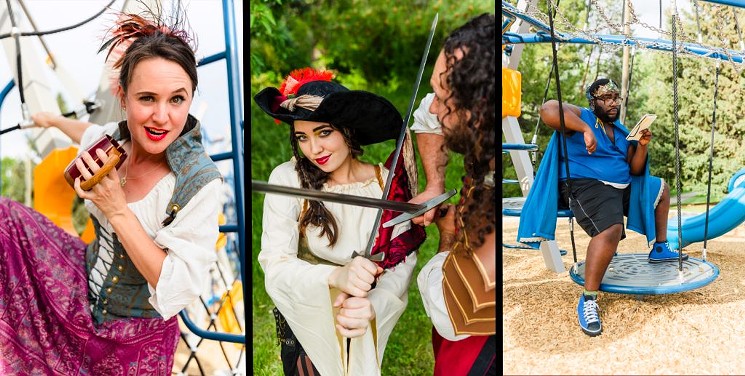 Sure! So you'll encounter four Heroes on your journey: Richard the Frothy, who runs the Arena and the game Pixel Blitz; Dread Pirate Bubbles, who runs the Menagerie and the Wheel of Fate; Professor Barleywine, who runs the Brewniversity and has Dragon Knowledge; and the Thief Queen Ale-Xandra, who runs the Thieves Guild and has The Master Quest.

There’s also a Questmaster, a Bard, the Wizard himself — Drinkledore, though you may not meet them all three-dimensionally. And an incredible supporting cast of bar and crew!

One of those is none other than Stephen Brackett of Flobots fame. How did he get involved in this project?

He's playing one of our lead characters, Richard the Frothy. And he's fantastic. Stephen has been in a Rainbow Militia show before, so they've got history — and I personally know Stephen from many incredible spaces in our community. We sit on the Mayor's Commission on Cultural Affairs together and see each other around a fair amount. I'm pretty sure he visited my high school when I was a freshman, so he's a legend in my book. He really lives up to it. An incredible honor to work with him, and he's perfect for the role.

It's also worth noting that he's splitting the role with Bryan Connolly, who is outstanding in his own right.

How was Beer Quest born from the Rainbow Militia? What's the connective tissue between those two efforts?

We've been considering what a WeAreDenver/Rainbow Militia crossover might look like, and the timing just worked out. We're co-producers on every level, and they're some of the best I've worked with.

And who are the beer partners that are supplying the hoppy hooch?

Our Arena sponsor is Voodoo Ranger, with WeldWerks, Raíces Brewing and Liquid Death following suit as Kingdom Sponsors. There are other partners for the Beer Garden, as well, which is open every day we do the show from 11 a.m. to 4 p.m.

What makes Denver the perfect place for Beer Quest?

All the amazing breweries, of course! Plus I think we've got a growing gamer/nerd community here that is starting to flex its muscles, and I love me some good ol'-fashioned geekdom.

Beer Quest shows run from Thursday, July 15, through August 1; they start at 6 and run until about 7:30 p.m., and players can stay and drink in the Champions Beergarden at 16th and Welton streets until midnight. Tickets are $35 to $45 per person (21+ only); get them on the Beer Quest website.
KEEP WESTWORD FREE... Since we started Westword, it has been defined as the free, independent voice of Denver, and we'd like to keep it that way. With local media under siege, it's more important than ever for us to rally support behind funding our local journalism. You can help by participating in our "I Support" program, allowing us to keep offering readers access to our incisive coverage of local news, food and culture with no paywalls.
Make a one-time donation today for as little as $1.