Art Is All Around Denver This Week!

Clark Richert, “Concentricity,” acrylic on canvas. Clark Richert, Rule Gallery
The fall gallery season continues to ramp up, and after a big First Friday, plenty of Denver art is on view.

Co-ops display a strong showing by members new and old, while the Chicano Humanities and Arts Council, hunting for an affordable space, is raising awareness with a new show in RiNo and hosting an early Día de los Muertos display in Arvada.

That's just the start of the action. Keep reading for the best offerings on the art scene right now:

Ronny Quevedo, “Revolutions Unbound,” 2019, wax on muslin.
Ronny Quevedo
Ronny Quevedo: at the line
Colorado Springs Fine Arts Center at Colorado College, 30 West Dale Street, Colorado Springs
Now through December 5
In Conversation: at the line: Thursday, November 4, 6 p.m.
Reservations required online or call 719-634-5583
When the Denver Art Museum’s newly refurbished and transformed Martin Building reopens later this month, a work by Ecuadorian artist Ronny Quevedo will be on display in the opening exhibition ReVisión: Art in the Americas, a bold juxtaposition of ancient and modern works interrelated through historical ties. But if you want to zero in on Quevedo and his particular artistic revisions, head down to CSFAC for at the line, a fascinating show of new and recent drawings incorporating delicate pattern paper, carbon paper, cloth and contact paper overlaid with metal leaf, wax and enamel, as well as sculptures evoking elements of basketball courts and correlating Mesoamerican games.

A found photo from Estevan Ruiz's show Tissues at Dateline.
Estevan Ruiz
Estevan Ruiz, Tissues
Dateline Gallery, 3004 Larimer Street
Now through October 31
Graphic designer and photographer Estevan Ruiz plays with found photos for Tissues, the first in a series called Lift (as in "lifted") that uses imagery from a previous time, without context. The random images raise questions about appropriation and the limits of the public domain, but they are also somehow riveting.

One creature from Johanna Mueller's menagerie of animals in nature.
Johanna Mueller
Johanna Mueller
Balefire Goods, 7513 Grandview Avenue, Arvada
Now through October 31
Printmaking Demo: Friday, October 15, 4 to 7 p.m.
Greeley-based printmaker Johanna Mueller’s animal subjects transmogrify human mythologies into non-judgmental storytelling from nature, but mainly they are beautiful to look at. Mueller’s work will be on view at Balefire throughout October, and the artist will appear in person on October 15 to give demonstrations of her printmaking process.

Leo Franco, Small Scenes and Reliefs
Louis Recchia, paintings
Pirate: Contemporary Art
7130 West 16th Avenue, Lakewood
Now through October 17
Leo Franco unveils his latest batch of mixed-media geometric wall sculptures and carved wood forms, while Louis Recchia shares another round of his familiar pop-themed paintings at Pirate, for a tried-and-true show that will make you nostalgic for the heyday of Denver co-ops. 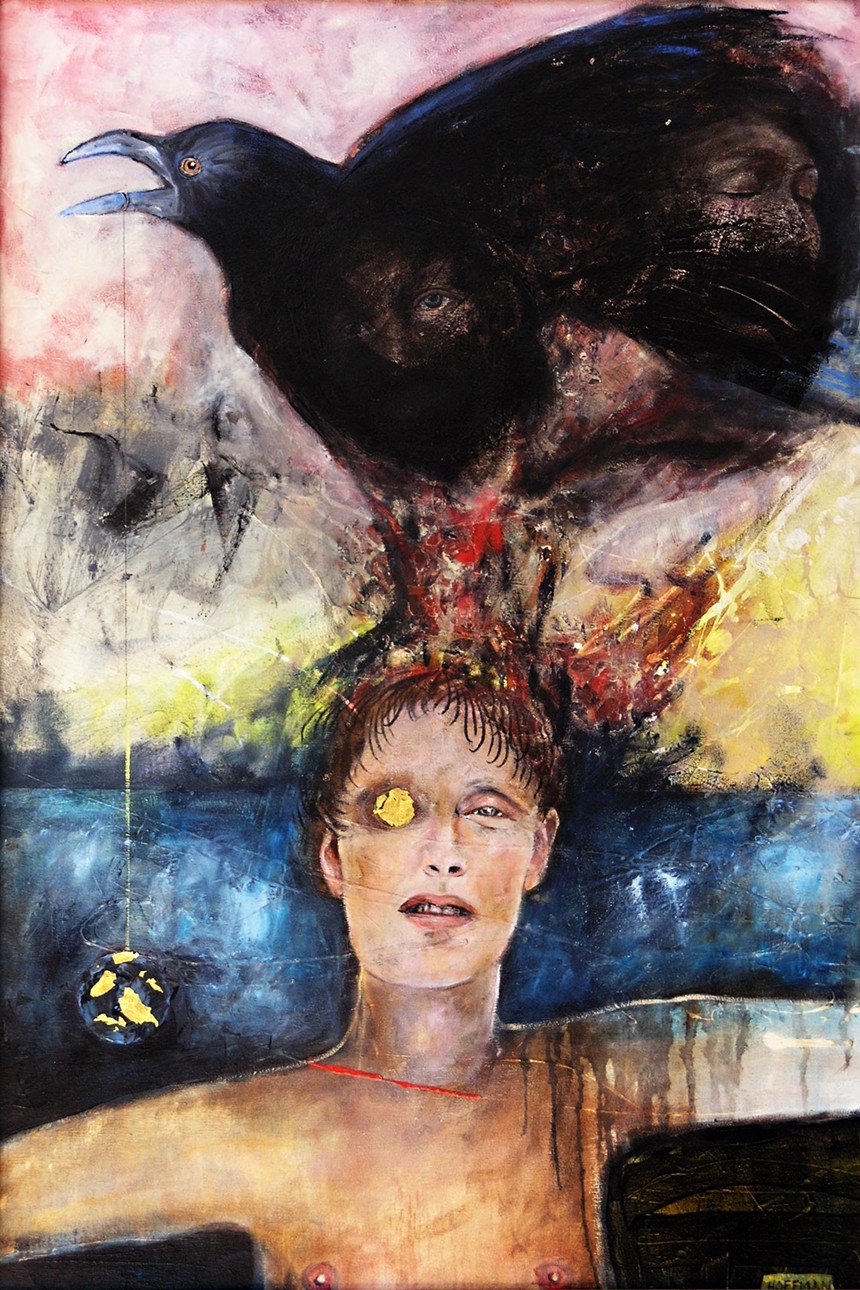 Katie Hoffman, “Not With a Bang but a Whimper,” oil and gold leaf on canvas.
Katie Hoffman
Katie Hoffman: Unsalable, and Clara Harbour: Location, Location, Location
Alane Holsteen: Reminiscences 2008-2021
Edge Gallery, Art Hub, 6851 West Colfax Avenue, Lakewood
Now through October 17
Katie Hoffman shows new paintings alongside her daughter, Clara Harbour, who dabbles in found-object assemblage, for an all-in-the-family exhibition at Edge, while Alane Holsteen presents a kind of retrospective showing how her art-making has changed since she moved into her own studio in 2008. 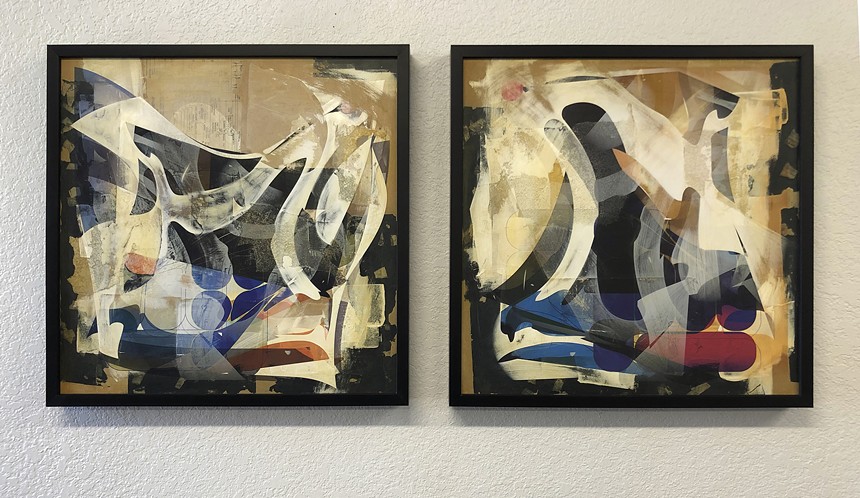 Ceramicist Gail Heilmann is one of more than 200 artists taking part in Boulder Open Studios in 2021.
Gail Heilmann
Boulder Open Studios Tours
Saturday and Sunday, October 9-10 and October 16-17, noon to 5 p.m. daily
Build your own tour here
Find a studio map here
The huge, self-guided Boulder Open Studios Tours, a tradition since 1995, brings together more than 200 Boulder-area artists — some official tour members and others available for visits by appointment — for three weekends of meeting, perusing and buying art right from the source. Find an artist catalogue and studio map online to help you build your own tour, and if you can, visit the preview exhibit of participating artist works at the Museum of Boulder, currently on view through October 18, to see whose art you fancy most. 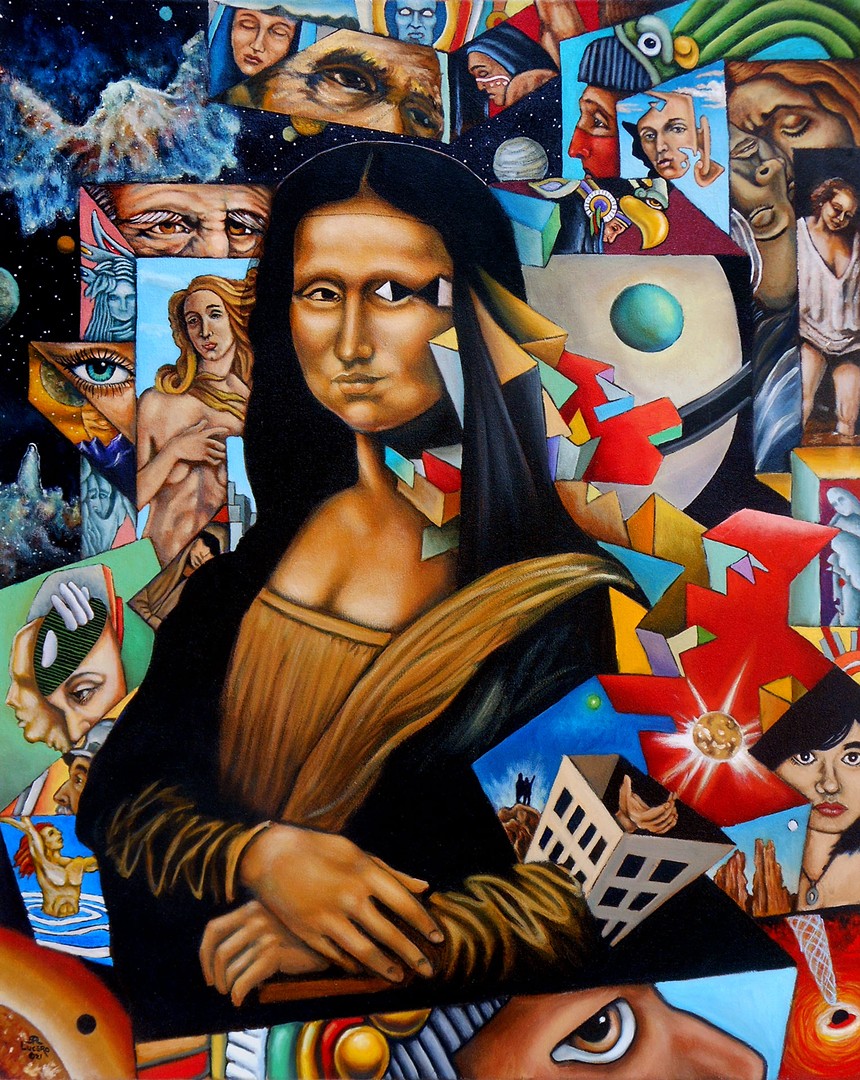