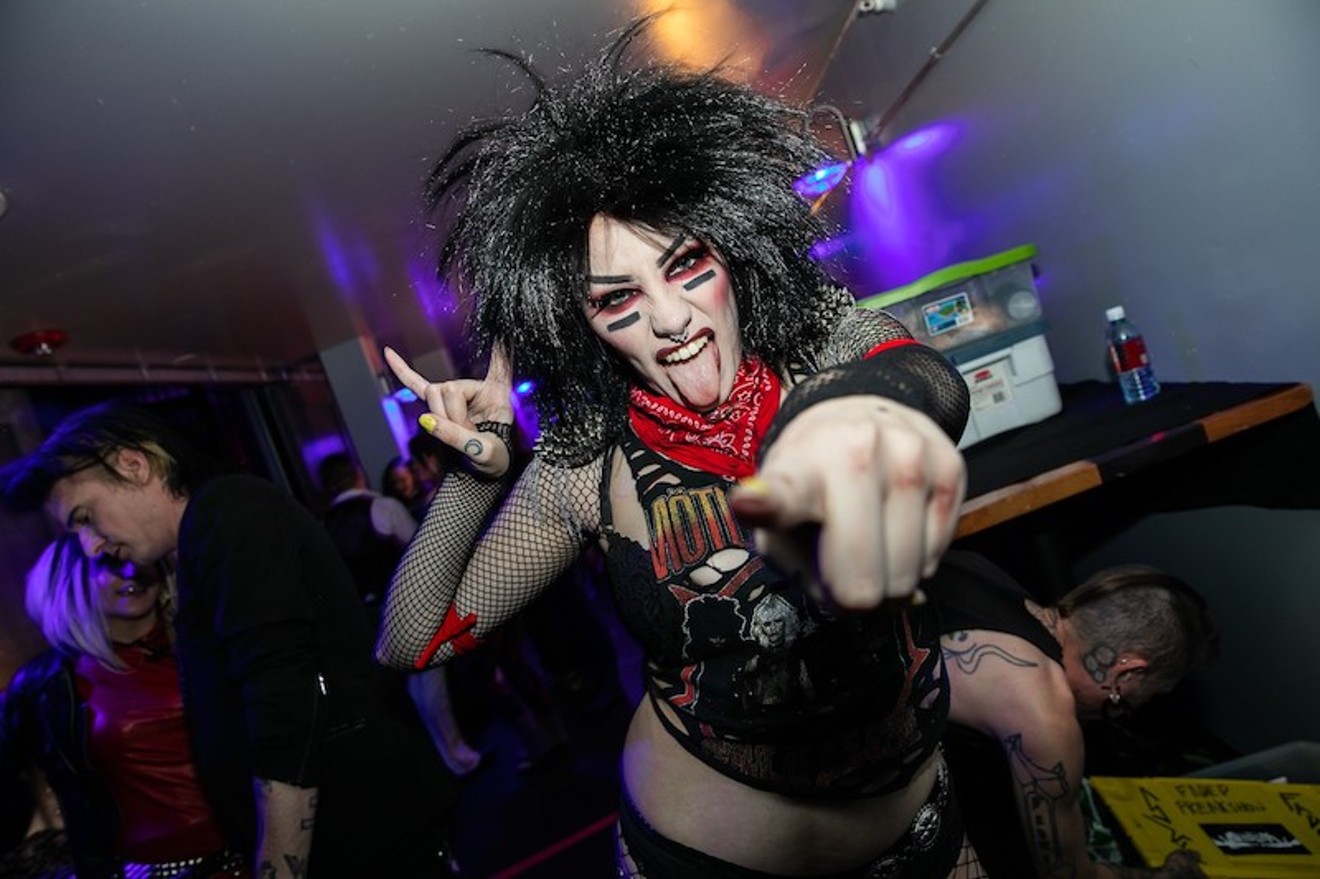 Don a costume and get weird when Deviant Night returns on Friday, March 22, with the Wicked World of Disney. Aaron Thackeray
Spring has finally arrived in Denver, and the city is blooming with activities sure to delight, from music to film screenings and cultural festivities. Don't fret about breaking the bank. Most of the events listed below cost around $10, and three are free!

Keep reading to learn more about the ten best affordable events in and around Denver this weekend.

Soirée Congolaise
Friday, March 22, 6 to 9 p.m.
Alliance Française de Denver
$10 to $15
Celebrate the breadth and diversity of the French-speaking world when the Alliance Française de Denver's Month of Francophonie continues with Soirée Congolaise, a fun and informative tribute to the nation known today as the Democratic Republic of the Congo. While the legacy of European colonialism — including the numerous atrocities committed under the frightful reign of King Leopold II of Belgium — is what ultimately led to the estimated 33 million French speakers who reside in the country today, these days the International Organisation of the Francophonie is equally dedicated to preserving each of its affiliated states' cultural and linguistic customs as it is to the mother tongue they all share. Get an introduction to the history of the Congo and its people at a Congo 101 seminar before diving into a curated selection of Congolese art, cuisine, music, fashion and dance. Admission costs $10 for members and $15 for the general public; visit the Alliance Française de Denver's events calendar to get tickets and further details.


Friday Night Weird: Daisies
Friday, March 22, 8:45 p.m.
Boedecker Theater
$6.50 to $12
Brimming with the pre-revolutionary fervor of the years leading up to the Prague Spring, V?ra Chytilová's Daisies was banned by the Czech National Assembly upon its release in 1966, and the filmmaker was prohibited from working in her native country for nearly a decade thereafter. Now widely regarded as a masterpiece of Czech New Wave cinema, Daisies still feels groundbreaking even 53 years after its premiere. Witness an uncommonly visual, surreal and anarchic rallying cry when Friday Night Weird continues its Women's History Month screening series with a tribute to one of film history's boldest feminist pioneers. Visit the Dairy Center box office page to buy tickets, $6.50 to $12, and learn more.

Aaron Thackeray
Deviant Night Presents: The Wicked World of Disney
Friday, March 22, 9 p.m.
Tracks
$5 to $10
Walt Disney would be spinning in his cryogenic chamber if he could see the sort of debauchery his characters are getting up to at Deviant Night Presents: The Wicked World of Disney. Get down and deviant with a dance floor full of costumed glamorous princesses, square-jawed heroes, outlandish villains and cuddly animal sidekicks boogieing down to the sounds of DJs Slave1, GSTV and Erin Evenflo when Tracks's monthly alternative dance night returns to answer the wish you made upon a star. The festivities also include an art walk, a live interactive stage and gogo gallivanting provided by Ru Entertainment. The cover charge costs $5 via online pre-sale and $10 at the door. Find tickets and more information on Deviant Night's box office page.

Courtesy of Denver Home Show
Denver Home Show
March 22 to 24, 10 a.m.
National Western Complex
$5.50 to $11
Three days of man caves, tiny homes, eco-friendly furniture and floral arrangements await when the Denver Home Show returns to the National Western Complex this weekend. Activities include instructional seminars led Jason Cameron of DIY Network’s Desperate Landscapes, Sledgehammer and Man Caves, classes on Sogetsu Ikebana, the Japanese art of flower arranging, and a tiny-home showroom. And don't worry, parent: Your kiddos can keep themselves occupied at the Home Depot Children's Workshop. Whether you're keen to spiff up your own abode or merely daydream about downsizing, the Denver Home Show has good bones and plenty of curb appeal.


Augustana Arts: Cindy and Friends
Saturday, March 23, 7 to 9:30 p.m.
Augustana Lutheran Church
$5 to $25
Frequently called "the king of instruments" for its massive size and expressive sound, the pipe organ requires a true master to conquer it. Augustana Arts's Minister of Music and organist Cindy Lindeen-Martin has mastery in spades, and she'll show off her skills — accompanied by an ensemble of instruments, including winds, brass, strings, percussion and bagpipe — at the Cindy and Friends concert. The evening's highlight comes in the glorious form of George Frideric Handel's “Arrival of the Queen of Sheba,” performed as intended on Augustana's grand organ. Visit the Augustana Arts events calendar for tickets, $5 to $25, and more information.


Perfect Blue
Saturday, March 23, 8 p.m.
Alamo Drafthouse Cinema
$8
The disturbing yet captivating debut of Satoshi Kon (arguably the David Lynch of anime), Perfect Blue is a truly mind-bending psychological thriller about a pop star caught up in a murder mystery that grows more fantastically abstract as the Hitchcockian suspense ratchets up. Alamo Drafthouse is offering otaku completists a chance to finally watch, or merely revisit, the now twenty-year-old classic on the big screen. Thanks to a glittering new digital restoration, the seldom-screened film looks better than ever, so don't miss out on this one-night-only opportunity. Find tickets, $8, and further details on Alamo Drafthouse Cinema's box office page.


Aurora Symphony Orchestra: Romantic Elegy
March 23 to 24, 7:30 and 3 p.m.
Aurora Fox Arts Center
Free to $20
Spring has officially sprung, which means love is in the air, along with an increased concentration of pollen. The Aurora Symphony Orchestra celebrates the season with Romantic Elegy, a trio of American neo-romantic compositions. Conducted by Norman Gamboa with a spotlight performance from flute soloist Catherine Peterson, the concert program consists of John Corigliano's Elegy, Lowell Liebermann's "Concerto for Flute" and "Orchestra, Op. 39," and Howard Hanson's "Romantic Symphony No. 2 in D-flat major, Op. 30." Admission is free for students, $15 for seniors, and $20 for everyone else. Buy tickets and learn more via the Aurora Symphony Orchestra's box office page.

Know of an event that belongs on this list? Email information to [email protected]
KEEP WESTWORD FREE... Since we started Westword, it has been defined as the free, independent voice of Denver, and we'd like to keep it that way. With local media under siege, it's more important than ever for us to rally support behind funding our local journalism. You can help by participating in our "I Support" program, allowing us to keep offering readers access to our incisive coverage of local news, food and culture with no paywalls.
Make a one-time donation today for as little as $1.