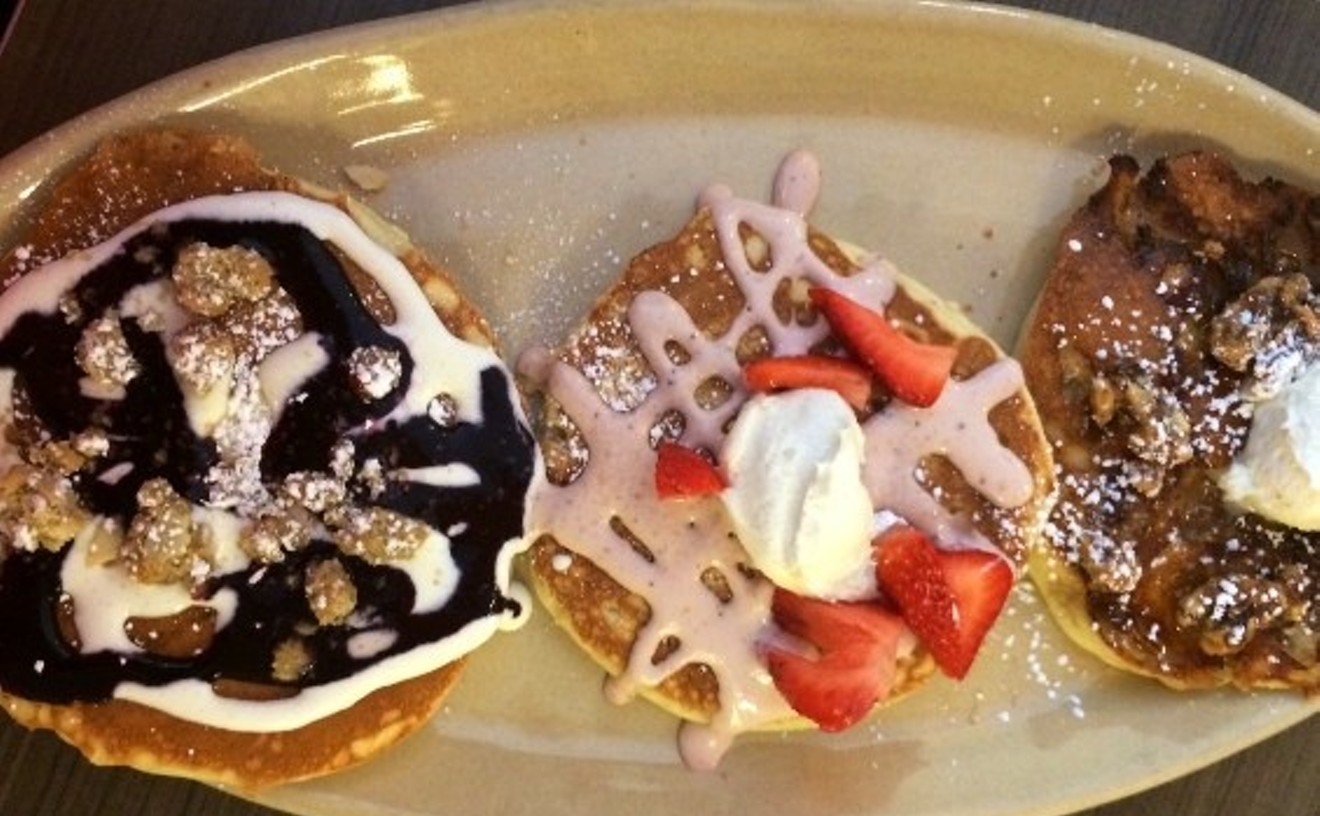 It's easy to flip for the flapjacks at Snooze, the mod breakfast barn for hipsters who stumble in and congregate at the counter or the crescent-shaped vinyl booths for steaming jolts of java, Bloodies to counteract the bleary eyes and sustenance to soak it all up. Snooze doubled our pleasure with a second location this year, keeping the same menu, which includes our favorite pineapple upside-down pancake, a saucer-sized sphere bundled with squares of caramelized pineapple, dusted with powdered sugar and dolloped with a scoop of cinnamon butter that melts into rivers of sweetness. This is a pancake bestowed upon us by the breakfast gods.

If you're going to haul out the ego and deem your restaurant — or, in this case, deli — a "masterpiece," you'd better live up to the superlative. There's a reason that this Highland sandwich shop commands lines out the door, making it nearly impossible to snatch up one of the few tables or counter stools: The sandwiches really are that good. Exhibit A, the Italian, featuring thin, nearly translucent Parma prosciutto; smoky salami; the rich fattiness of mortadella, pepperoni and capicolla; sheets of provolone and peppery arugula, lettuce and slivered red onions. It all comes stacked on crusty ciabatta slicked with vinegar and oil and smeared with a black-pepper-spiked aioli — and is nothing short of a masterpiece.

Best Dessert That's Not a Cupcake

Thank Sean Kelly, exec chef of LoHi SteakBar, for the best chocolate pudding in town. There are other sugar finales on his menu — slices of pie from Living the Sweet Life Bakery, sorbet and ice cream from neighboring Little Man and a fantastic banana split — but it's the housemade double chocolate pudding, a luxuriously thick, excessively rich, astonishingly good confection of semi-sweet Callebaut chocolate, milk, sugar and cocoa crested with whipped cream and chocolate shavings, that we wish we could freebase. If you plunge into Kelly's pudding and still insist that you don't have a fever for chocolate, you really are sick.

Sociable, inviting and foreplay-heavy with the murmurs and hums of flirtatious couples, the Village Cork earns a coveted spot in our amply lubed livers for its whimsy, its far-reaching list of wines by the bottle and glass, and its chalkboard menu of sumptuous sharable plates, including beef short ribs, roasted chicken and a trifecta of thrilling vegetarian dishes from new chef Samir Mohammad. Notable deals — 25 percent off "by the bottle" selections every Tuesday and Wednesday, and $5 pours by the glass on open bottles after 9 p.m. during the week and 10 p.m. on weekends — give us reason after reason to return again and again. 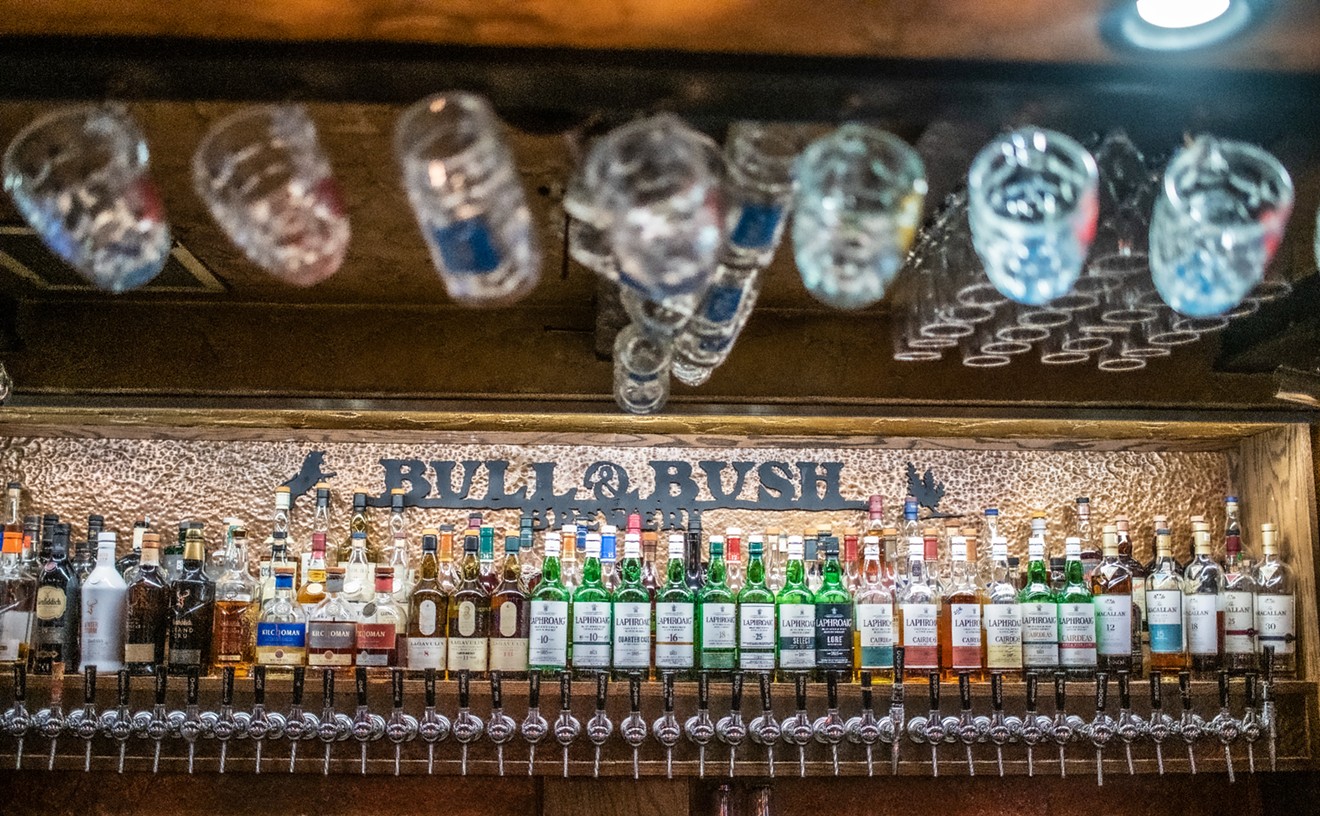 The Bull & Bush is one of a handful of brewpubs in town that sell growlers — 64-ounce glass containers — that you can fill up and take with you. At this 39-year-old brewpub, you spend $12 for your first growler and then bring it back for $8 refills (of anything on tap aside from special releases). But on Tuesdays, Bull & Bush knocks a buck off both those prices. And if you get a growler punch card, your tenth refill is on the house. 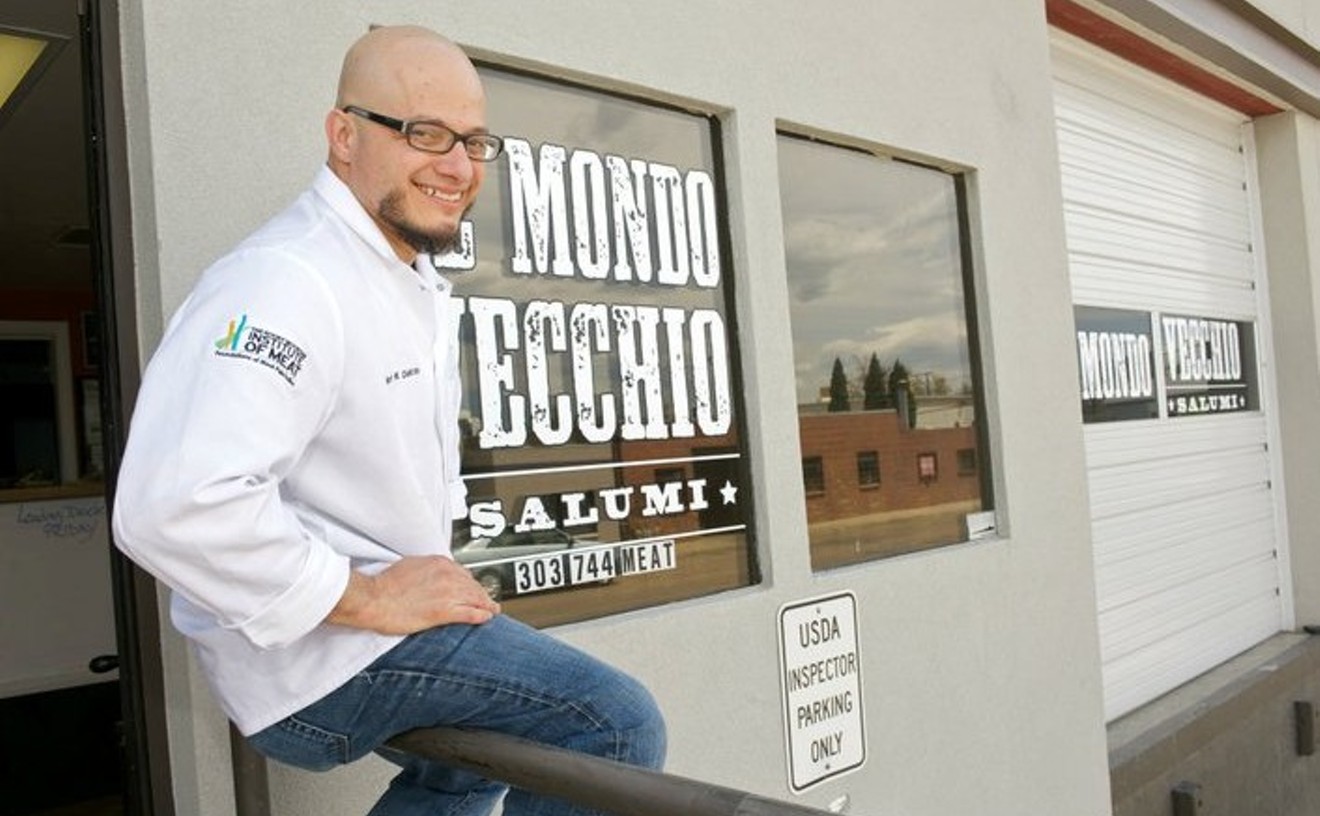 Mark DeNittis, Adam DeSacco and Gennaro DeSantis are Denver's salumi sultans, and they've gifted us with Il Mondo Vecchio, the state's first (and only) USDA-inspected salumeria. During the tasting tours, which must be arranged in advance, DeNittis will seduce you with the best pepperoni you've ever tasted; make you kneel in gratitude just from the scent of the longanzia spiced with garlic, paprika and hints of citrus; and induce sighs of rapture as you sample the duck breast prosciutto, veal pancetta, guancie baciate, vino e pepe and whatever else the man is excited about — which is usually everything. There's no retail space and no cafe (though there's talk of doing both in the future), but you can order the meats directly from the website. 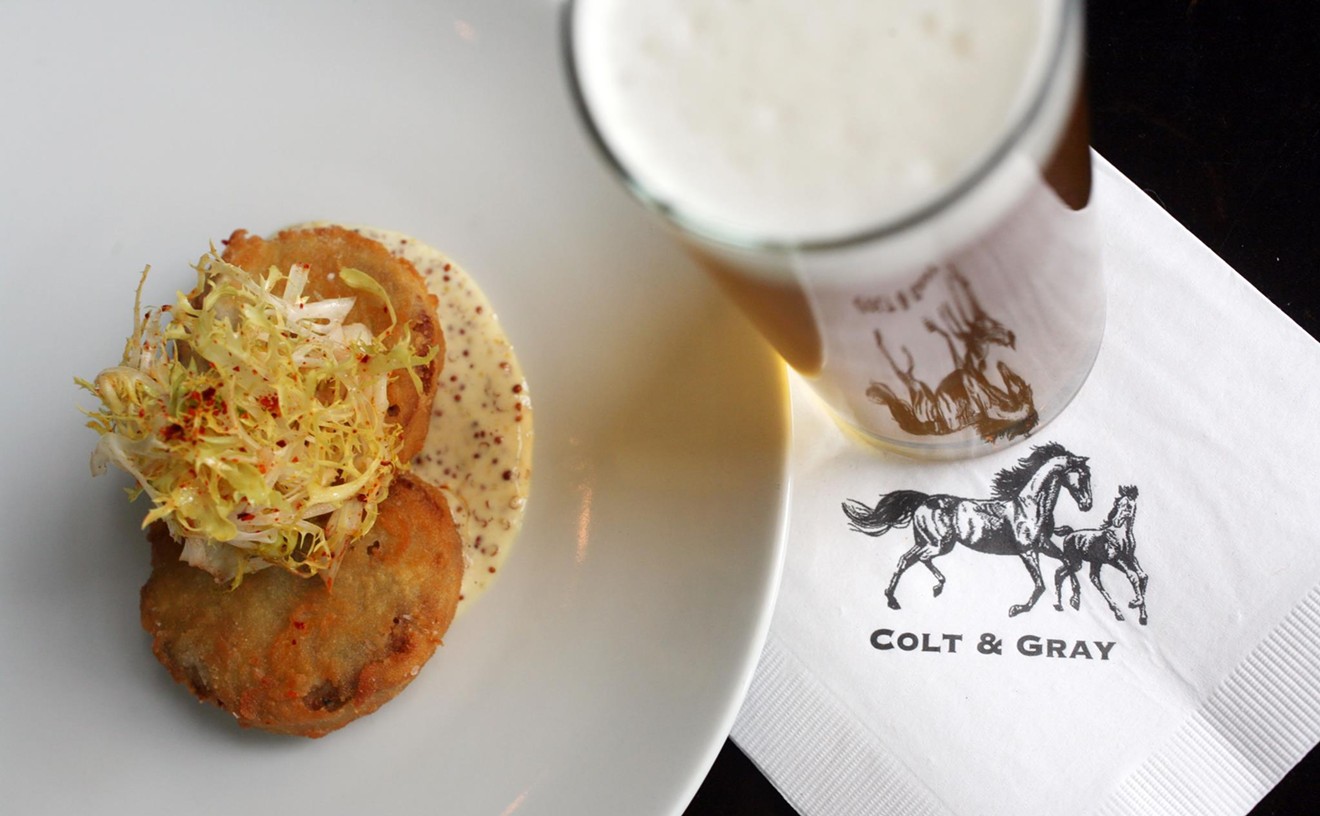 Last year, when owner/chef Nelson Perkins revealed plans to open Colt & Gray, he swore up and down that, if nothing else, his kitchen would put forth Denver's best burger. In a city that lives and dies by its beef, those were fighting words. And when that city is suddenly enjoying a windfall of burger joints — with more in the pipeline — that kind of declaration holds as much water as a leaky thimble. But you know what? Perkins was the wrong guy to doubt, because his burger — a stocky, juice-drooling hand-formed patty of loosely packed, house-ground dry-aged chuck, paved, if you want, with a swatch of really good Gruyère and shoved between the lightly grilled cheeks of a brioche bun — is indeed the best burger in town. 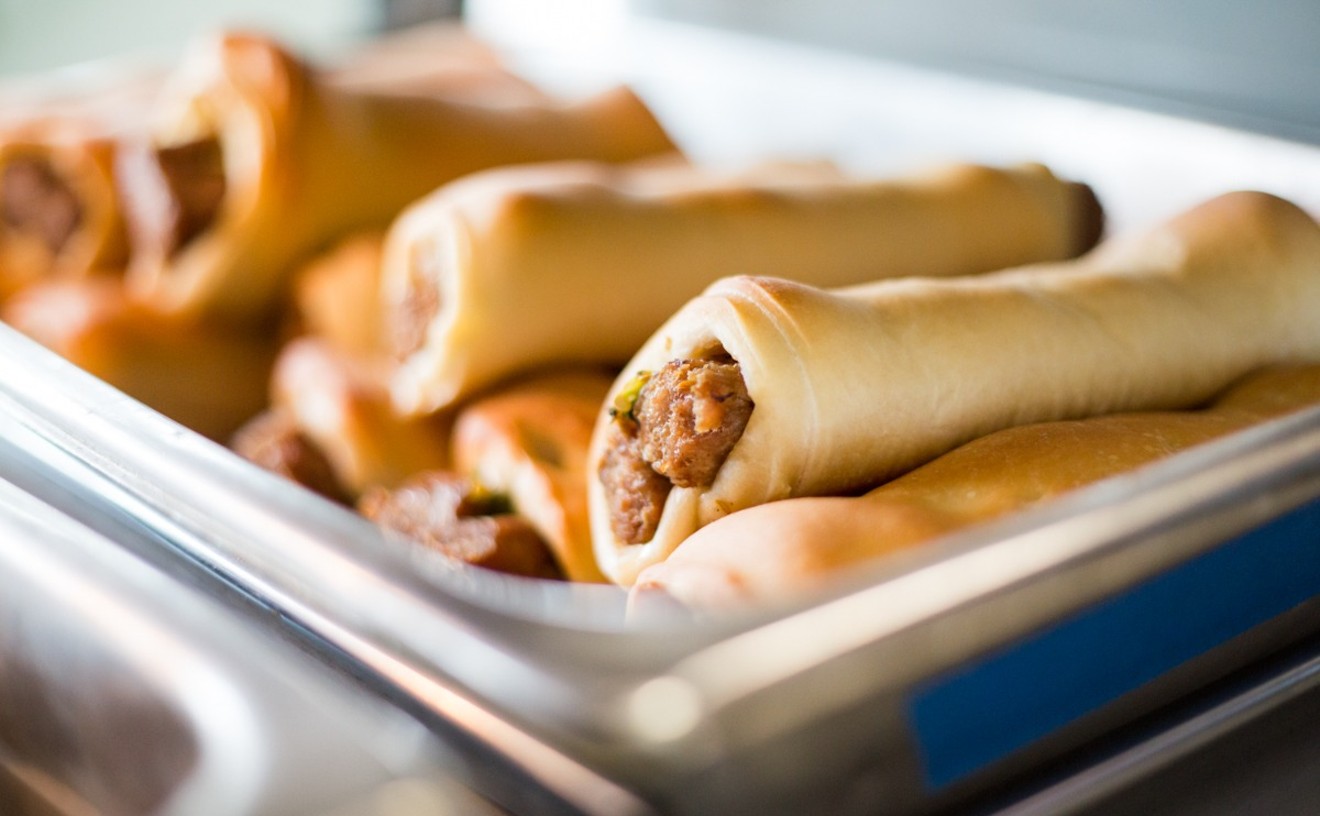 Lechuga's is one of the great pasta-and-pizza joint holdouts that testify to northwest Denver's great Italian tradition. The generous calzones are nothing to sneeze at, but what sends patron's tastebuds spinning is the infamous Little Devil: spicy sausage, wrapped in spicy jalapeño, locked down in a chewy, fresh-baked roll. Dip it (or just smother it) in sweet marinara sauce and enjoy. Then have another. And another. Perfect for lunch, dinner, a sizable snack — or whenever you need that special reward for having been entirely too angelic — the Little Devil proves it's better to dine in hell than diet in heaven.

Why is Federal Boulevard Denver's best stretch of asphalt for pumping up your spare tire? Because of joints like El Taco Veloz, where a meager $1.75 gets you a steaming corn tortilla abundantly mounted with whatever animal flesh rocks your world, plus onions and cilantro and access to the bar of Mexican condiments, a startling reservoir of grilled or pickled jalapenos and incendiary salsas (including an absolutely amazing avocado and tomatillo version), trays of pickled onions, carrots and chiles, and tubs of everything from cucumbers and radishes to slivered red onions and fat wedges of lime. Our favorite style of taco is the al pastor, spit-carved and topped with pineapple, and so popular that this particular meat has its own spindle in a special corner of the rollicking taqueria.

Our ship came in the day Oceanaire landed in Denver. The restaurant itself has the feel of a vintage ocean liner, with a comfortable, clubby bar; the service is formal but friendly. But what really floats our boat at Oceanaire is the seafood: fresh fish brought in six days a week from around the globe, then handled with care by a kitchen that knows how to handle these creatures, even in landlocked Denver. And chef Matt Mine keeps his menu as fresh as the fish that's its mainstay, changing up plates, offering specials and making sure that the side dishes and meat-and-potatoes fare on offer are just as good as the seafood. Which is the best in Denver.