Phoenician Kabob is where you come for kabobs, tabbouleh and kibbeh, garlic dip and grape leaves, beef shawarma and lamb shanks, where you enjoy your Mideast feast in a dining room spackled the colors of sumac, cumin and turmeric. It's also where you station yourself on a Saturday night, when the restaurant becomes a sultry den in which to get your shimmy on while checking out the sexy belly dancer. At those times, when the dancer wiggles her hips and jiggles her assets, it's not exactly easy to concentrate on the menu — unless you get into the spirit of excess and order the Sultan Combo. This is a mounded platter of the best of everything the Middle East has to offer — flat-out fantastic foodstuffs (lemony hummus dusted with sumac, earthy baba ghanouj tasting of deep smoke, sour grape leaves, chewy falafel orbs brightened with the vivid green of herbs and gyro) that might very well kill you, but at least you'll keel over knowing that you ate royally well.

You've worshiped at the shrine to Farrah Fawcett that merits its own shelf above the bar; hoofed your way through the pig platter; contemplated holding chef Max Mackissock hostage because he refuses to part with his chicken-liver mousse recipe; and shimmied while unapologetically inhaling the shake-n-bake sweetbreads. But it's Mackissock's beef cheeks that are the silent sleeper on Squeaky Bean's bang-up board of seasonally inspired dishes: The meat, long-braised, cloaked in a deep and rich veal stock and crowned with fennel and chiffonade of spinach, collapses at the swipe of a fork; right beside is a roasted potato, hollowed out and puddled with a creamy fonduta bolstered by bacon and chives, which elevates the proletarian tuber to rock-spud status. All this goodness comes from a stubbornly diminutive kitchen that's roughly the size of a pig's snout. Just imagine what Mackissock could do with more room! But then, we could never imagine the restaurant leaving this wonderful corner of Highland, where it fits so seamlessly into the fabric of the neighborhood that it's almost a shock to remember that the Bean first squeaked just last May.

The breakfast burrito could be Colorado's official food. Just about every breakfast joint in Denver offers one, even if the only authentically Mexican thing about the place is the dishwasher. Vendors peddle breakfast burritos door-to-door at office buildings in the morning and sell them in LoDo at let-out. And you can find a good breakfast burrito on just about every block in the city — especially the 2500 block of Federal Boulevard. In this corner, at 2505 Federal, an outpost of Santiago's, the homegrown chain that's found many fans for its hot green chile and tidy, foil-wrapped breakfast burritos that go for $2 with cheese, $1.75 without (720-855-8109). Across the street, at 2524 Federal, Jack-n-Grill, Jack Martinez's shrine to New Mexican food, offers a very respectable Colorado breakfast burrito to-go for $2 (303-964-9544). And around the corner, at 2900 East 26th Avenue, Araujo (303-455-3866) wins the price game, burrito-filled hands down: Its breakfast burrito is just 99 cents. (Come back during the day for four tacos for $5.)

Here's a deal that's right up our alley. Lucky Strike Lanes in the Denver Pavilions is known as a hip nighttime hangout, but it also rewards those who get up early with Brunch and Bowl. From 10 a.m. until 2 p.m. every Sunday, Lucky Strike puts out an impressive brunch buffet spread for $12.95 (wash down your meal with $2 mimosas) — and if you fork over another five bucks, you can work off that meal with two hours of bowling. Strike! 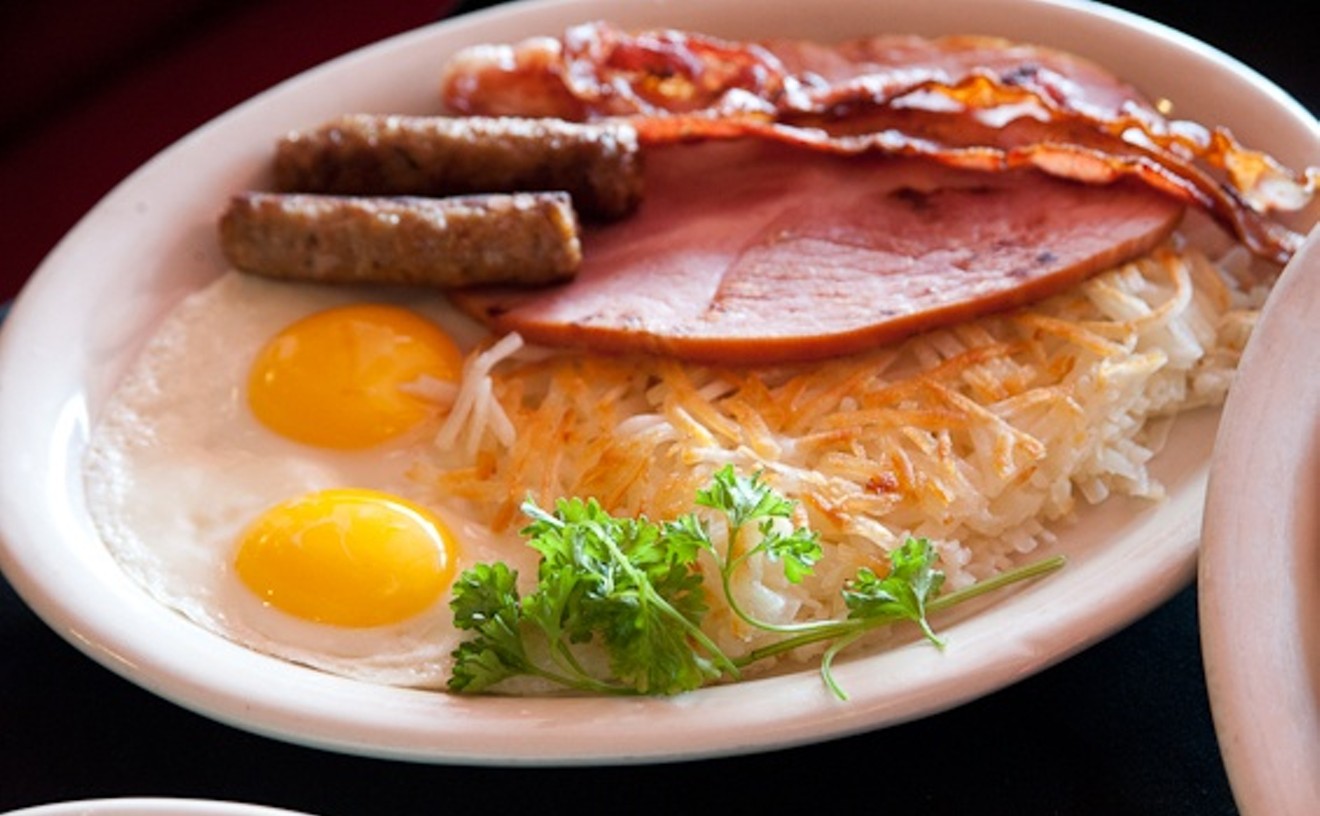 Yes, the '50s shtick can seem a little glaring at 4 a.m., when all you need is a big burger or a plate of steak and eggs to start — or end — your day. But even though Great Scotts hasn't been around since the '50s, it's been around long enough to serve a generation of fans authentically good roadside fare. While the second location, in Broomfield, isn't open 24/7, you can count on the original just off the highway to have the welcome sign out day or night. 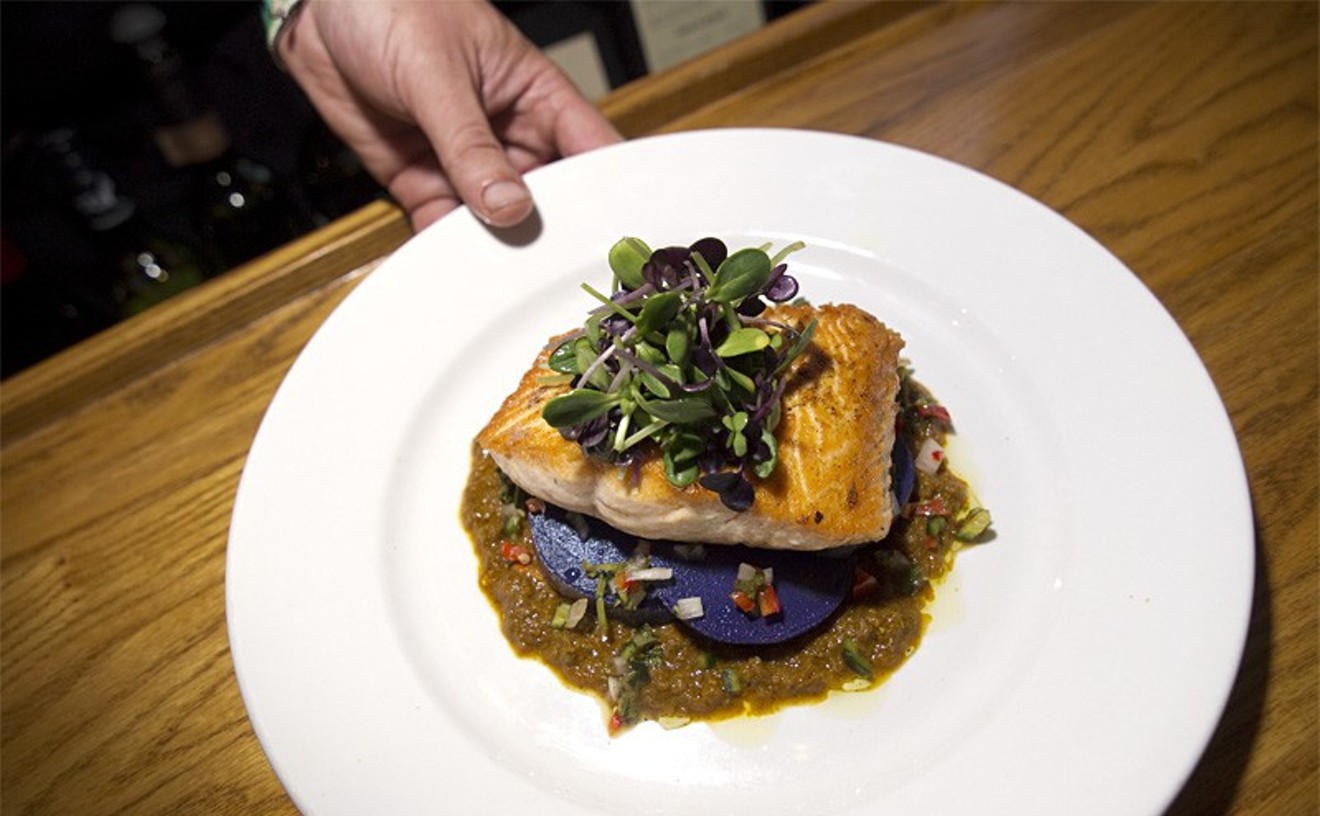 Perhaps you've heard about the years-long political struggle to get the City of Boulder to accept the Dushanbe Teahouse after it had already been sent there in boxes — eight years during which the mayor of Dushanbe died without seeing his dream of an exchange fulfilled. Perhaps you know that over the years, the food at Dushanbe has been variable — sometimes terrific, sometimes so-so. But you absolutely can't argue with the amazing list of teas it serves, teas with names like White Jasmine Moon and Paradise Green, good-for-you teas like Tender Tummy and Feel Better Brew, concoctions that your waitperson will serve with such warmhearted concern that you know she deeply and personally cares about your well-being. Sit on the patio, listen to the snowmelt-swollen creek rush by, sip and meditate on international understanding.

The Oskar Blues Brewery makes some of the best beers in the state, selling six of them in cans and another handful on tap. But this Longmont-based brewer doesn't keep all the glory for itself. At Oskar Blues Home Made Liquids & Solids, the company's second restaurant in Boulder County, you'll find thirty or so more beers on tap, many of them big, rare, challenging or highly sought-after concoctions from other Colorado outfits, and a few from brewers across the country. Such offerings as Great Divide's Yeti Imperial Stout, Russian River's Pliny the Elder and Port Brewing's Wipeout IPA all add up to a beer geek's dream.

If happy hour has taught us well-lubricated lushes anything, it's that drinking on an empty stomach is a recipe for stupidity, especially if you drink like we do. So if you're smart, you'll spend your next happy hour (and those after it) at Panzano, where, from 2:30 to 6 p.m. daily in the convivial lounge, attentive tenders pour $3 draft beers, including Guinness and Moretti; $4 wines by the glass; and profoundly trippy but delicious cocktails. But as irresistible as we find the liquor, it's chef Elise Wiggins's $3 and $4 happy-hour, happy-food deals that really knock us out. Her culinary prowess shows up all over the dishes: in the Hazel Dell mushroom-stuffed crepes with fonduta sauce, in the duck-liver mousse with Parmesan doughnuts, in the speck-and-pear pizza capped with Gorgonzola and drizzled with rosemary honey and a light baptizing of truffle oil. May all your hours be as happy as those you spend here. 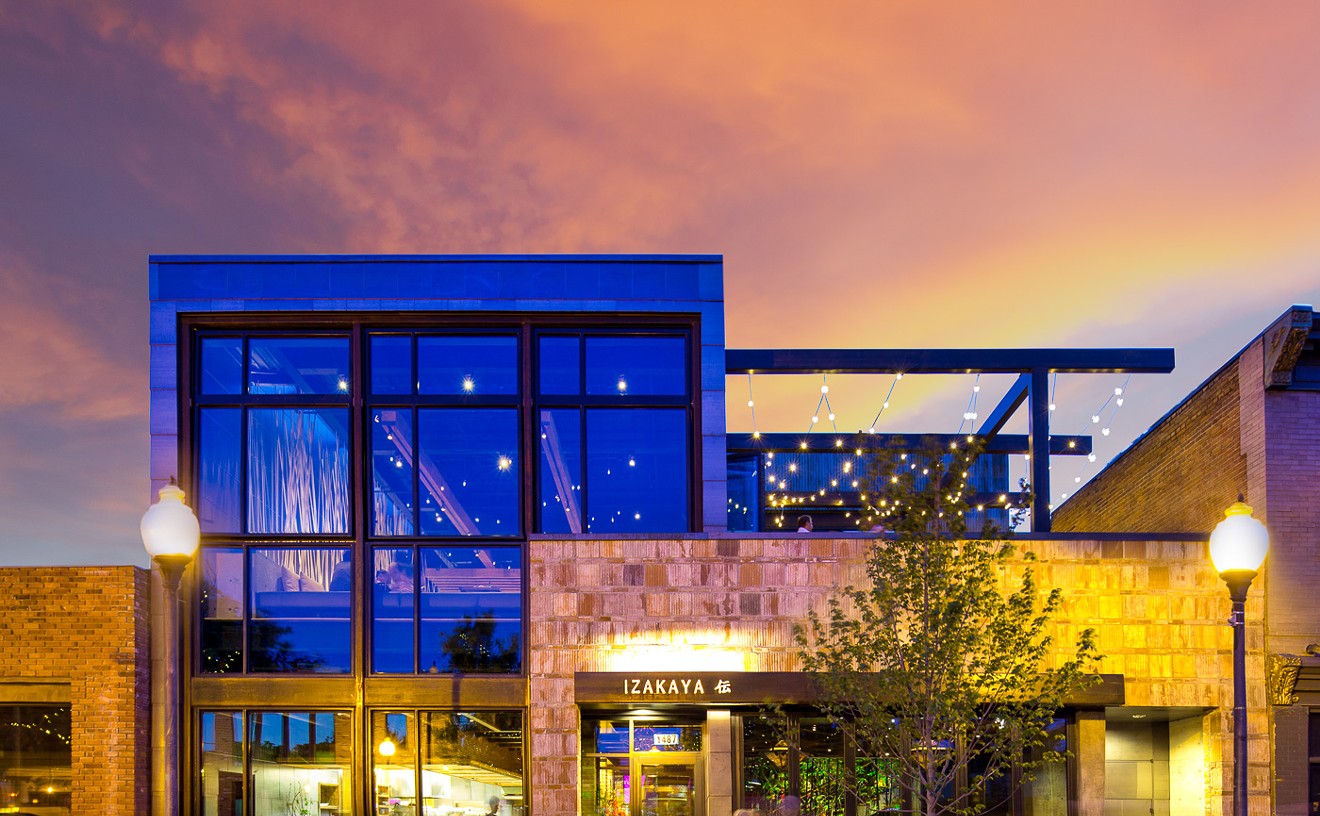 What do otherwise dedicated carnivores eat when they think no one's watching? Seaweed salad at Izakaya Den, a tide of flashy green algae, weeds and leaves, pink grapefruit wedges, pencil-thin rods of asparagus and sliced apples tossed in a stark white, square bowl, sprinkled with sesame seeds and dressed with a citrus-y spray. The salad is included on the vast menu among many other temptations — sushi, sashimi, udon and unagi bowls, tempura, Kobe beef sliders and miso black cod — and while the kitchen at Izakaya Den does all of those things very, very well, the bright, acidic flavors of this salad make it a standout. Pizzaiolo Kelly Whitaker learned how to make pizza in Italy, then brought that knowledge to Boulder, where he recently opened Pizzeria Basta. Boulder already has some of the best restaurants in the state, Frasca and L'Atelier among them; can an artisan pizza joint share in their stardom? There's no question that Whitaker has every intention of trying. He makes his dough using a fifty-year-old starter kit from Naples; he sources as many ingredients as he can from local suppliers, farmers and vendors; he pickles his own vegetables, crafts his own mozzarella and ricotta, cures his own pancetta and makes his own sausage, all of which are noble endeavors. But Whitaker really displays his skills when he puts everything together: The slightly misshapen crusts, properly salted and scorched in all the right spots, are surfaced with a remarkably fresh tomato sauce and mouthfuls of inspired meats and vegetables.