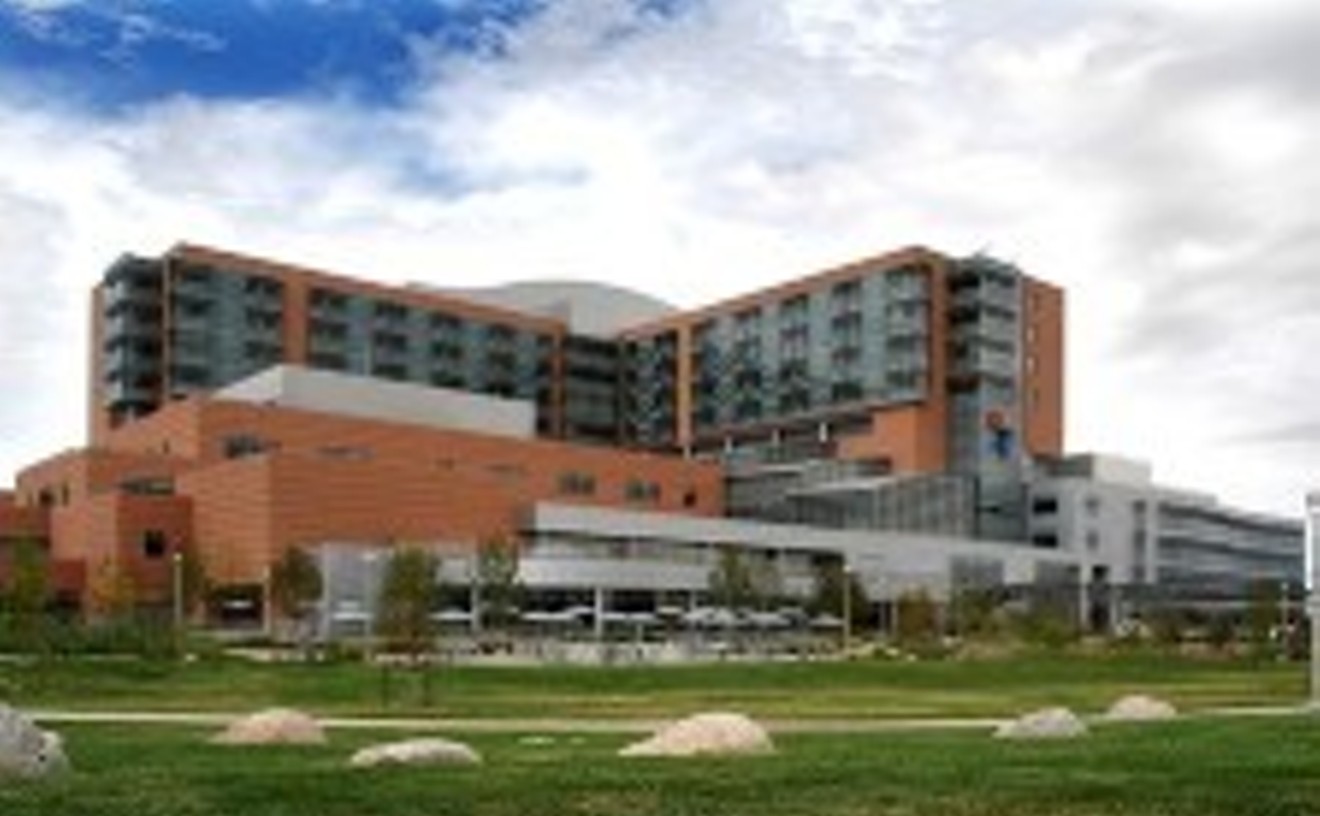 No one wants to have to take their kid to the Children's Hospital, but the facility has done all it can to make the experience a brighter one, and that includes the colorful layout — from the glass elevator to the kids' artwork on the walls to the 12,000-LEGO brick scale model of the hospital, built in August 2007 by a LEGO Master Builder to 1:89 scale. The 21-inch-high replica stands on the second floor of the atrium — right outside that glass elevator — and faithfully represents many details of the real hospital and its grounds, from trees to helicopter landing pad.

Back in the '70s, when the specter of school busing was scaring the double-knit pants off of suburbanites, Colorado passed the Poundstone Amendment, to prevent the City and County of Denver from annexing land. As a result, while other metropolitan areas swallowed suburbs (and their tax revenues), Denver suffered from stunted growth and seemed doomed to never pass the half-million mark in population. But now, with new-urbanism projects at Stapleton and Lowry and more infill in the Platte Valley and RiNo, Denver's growing again. In fact, according to the U.S. Census Bureau, it's now the fourth-fastest-growing county in the country, with a population of just over 600,000.

He represents a college town, so he might as well do it right. Second District Representative Jared Polis barely balked last August when comedian Stephen Colbert brought out a six-pack of Coors Light and a red funnel and challenged him to do a beer bong during taping of The Colbert Report. Polis, who had described Congress as "like going back to college," slammed part of the beer — and then Colbert finished it. That's bipartisan support!

The basic theory about Colorado's volatile climate: If you don't like the weather now, wait a minute. But when it comes to weather forecasts, TV viewers have always had to wait more than a few minutes, since local news broadcasts traditionally like to put weather news at the end of the show, compelling viewers to stay tuned through everything else. But finally this year, Channel 4 decided to experiment with presenting the entire forecast early in its evening broadcast — at the behest of KCNC's chief meteorologist, Ed Greene. Combined with the always dependable Jim Benemann, along with solid performances by new co-anchor Karen Leigh and sports lead Vic Lombardi, Channel 4's new format makes the forecast look bright for this nightly news show.

The Pfitzer juniper is a vigorous evergreen that homeowners love to sculpt into amorphous lawn blobs and multi-balled bushalabras. The octogenarian homeowner of this tidy green Mediterranean-style bungalow on Cherry Street had a much more definitive topiary treatment in mind: a tribute to the beloved mascot of his alma mater. Ralphie the Buffalo was sculpted out of the shrubbery years ago and requires periodic "haircuts." The aging artist admits that he doesn't barber his bush quite as often as he used to, but even so, this bison looks buff.

This amazing cache of photographs was intended to announce the October 1963 grand reopening of "the world's largest variety store," the Woolworth in the heart of downtown Denver, newly expanded to 174,000 square feet, with two miles' worth of counter dis­plays on two floors. In this virtual time capsule, each of the vividly colored images can be enlarged for detailed viewing of ten different departments. Baby boomers will want to search for their lost youth among the Toyland department mer­chandise, while Capitol Hill-dwelling Millennials will get garage-sale boners from looking over the wall-clock selection in housewares. Banjos, ukuleles and trumpets were available alongside a slim assortment of TVs in the record department. In the future, the best grand reopenings may be opening up such looks to the past.

After a fellow legislator suggested screening the use of American Indian mascots in Colorado high schools, House Minority Leader Mike May came up with his own idea: banning "cougars" as mascots. Currently, seven high schools in the state have cougar mascots. "Under his proposal," May's office noted, "offending mascots must be approved by the newly created Cougar Council, which meets every Saturday night at Elway's in Cherry Creek."

The ganja's all here. At 8 Rivers, the restaurant they moved to LoDo in 2008, Wanda James and Scott Durrah serve up the flavors of the Caribbean. But their interest in that area's lifestyle isn't limited to the cuisine, as the portrait of Bob Marley on the wall proclaims. This politically connected couple opened a dispensary, Apothecary of Colorado, in December, where they feature homegrown strains, offer industry nights for restaurant workers and tout the very practical cooking class for medical marijuana patients they hold at 8 Rivers. While many medical marijuana advocates exude so much hot air, James and Durrah are the toke of the town.

Tom Green has been on the air in Denver for more than 25 years — an impressive record in a shrinking industry that's buffeted by the changing marketing winds. But Green's low-key delivery, easy style and quick one-liners remain a constant, and he's stayed a pro — whether he's doing sports for channels 9, 7 or 31, or news on Channel 2, where he currently leads the station's morning show. With or without a tie, Green is a survivor. Let's hope he stays that way.

The gorillas are good and the rhino is respectable, but the best animal artist at the Denver Zoo is clearly Dolly, one of two painting pachyderms that show their stuff every so often for special events and fundraisers. Despite Dolly's partially paralyzed trunk, her work stands out for its expressive palette and an abstract style that can evoke a variety of emotions, from anger to nostalgia to a desire for more peanuts. Bravo, Dolly!