Tom Green has been on the air in Denver for more than 25 years — an impressive record in a shrinking industry that's buffeted by the changing marketing winds. But Green's low-key delivery, easy style and quick one-liners remain a constant, and he's stayed a pro — whether he's doing sports for channels 9, 7 or 31, or news on Channel 2, where he currently leads the station's morning show. With or without a tie, Green is a survivor. Let's hope he stays that way.

The gorillas are good and the rhino is respectable, but the best animal artist at the Denver Zoo is clearly Dolly, one of two painting pachyderms that show their stuff every so often for special events and fundraisers. Despite Dolly's partially paralyzed trunk, her work stands out for its expressive palette and an abstract style that can evoke a variety of emotions, from anger to nostalgia to a desire for more peanuts. Bravo, Dolly!

It seems like it's been well over twenty seasons since construction started on the Four Seasons Hotel and Private Residences on the corner of 14th and Arapahoe streets in downtown Denver — but you can watch the tower, billed as the most expensive property ever built in Colorado, go up in twenty seconds on the website. A time-lapse camera recorded the construction from the pouring of the foundation to the raising of the roof, and while the brisk erection speed may entertain promiscuous web surfers, more technically astute architecture lovers can click on the convenient photo-gallery link to access hundreds of construction photographs taken by amateurs and profes­sionals. There is also a heavenly description and handy tutorial on how to live a Four Seasons Life, which only seems fitting after watching life flash before your eyes.

It wasn't that funny in 1873, when Alfred Packer killed and ate his fellow prospectors after they became stranded in a snowstorm near Lake City. But, as they say, pain plus time equals humor. Today, Alfred (the historically accurate spelling) Packer is a macabre local celebrity, remembered in song and film and at the Alferd G. Packer Memorial Grill in Boulder. His actual gravesite is in the Littleton Cemetery, where teens regularly stole it in the 1960s and '70s. Eventually, the U.S. Department of Defense got tired of replacing the marble marker (since Packer was a veteran, the agency paid for it), so the cemetery encased the marker in cement. The current stone is chipped from the last time someone tried to take it, but the cemetery has one remaining replacement, just in case anyone decides to resurrect this prank.

Best Guess for When Marijuana Will Be Completely Legal in Colorado

Californians will vote on whether to make marijuana legal this fall, and Mason Tvert has plans to bring the issue to Colorado voters next year. But with upsets predicted at the ballot box in November, Cali's unlikely to legalize marijuana this round, and Colorado can count on at least two more election cycles before voters surrender to the inevitable. We're betting on pot to become legal in 2014.

Lisa Hidalgo is a Colorado native who grew up watching Mike Nelson, the veteran weathercaster at Channel 7, so she knows which way the wind is blowing in this state. She's easy on the eyes, but goes easy on the cute happy talk that so often can get in the way of delivering a straightforward weather report. In fact, she presents the news the way we imagine the cool girl in college would do it: breezy.

Having public artworks replace private cars could be the perfect example of Mayor John Hickenlooper's plan to transform Denver from an outpost of the automotive age into the very model of a creative-class city. The empty parking lots of this shuttered John Elway Ford dealership are separated from the City Park neighborhood to the north by an aging wooden security fence hung with lively works of contemporary art. The artwork east of Gar­field Street consists of colorful constructions that handily show what a good artist can do with leftover mate­rials and scraps of time; the pieces hanging on the fence east of Jackson Street are assembled from repurposed wooden screen doors and discarded housewares. This gallery is open at all hours; art lovers are encouraged to bring their own wine and cheese.

Best Addition to the National Register of Historic Places 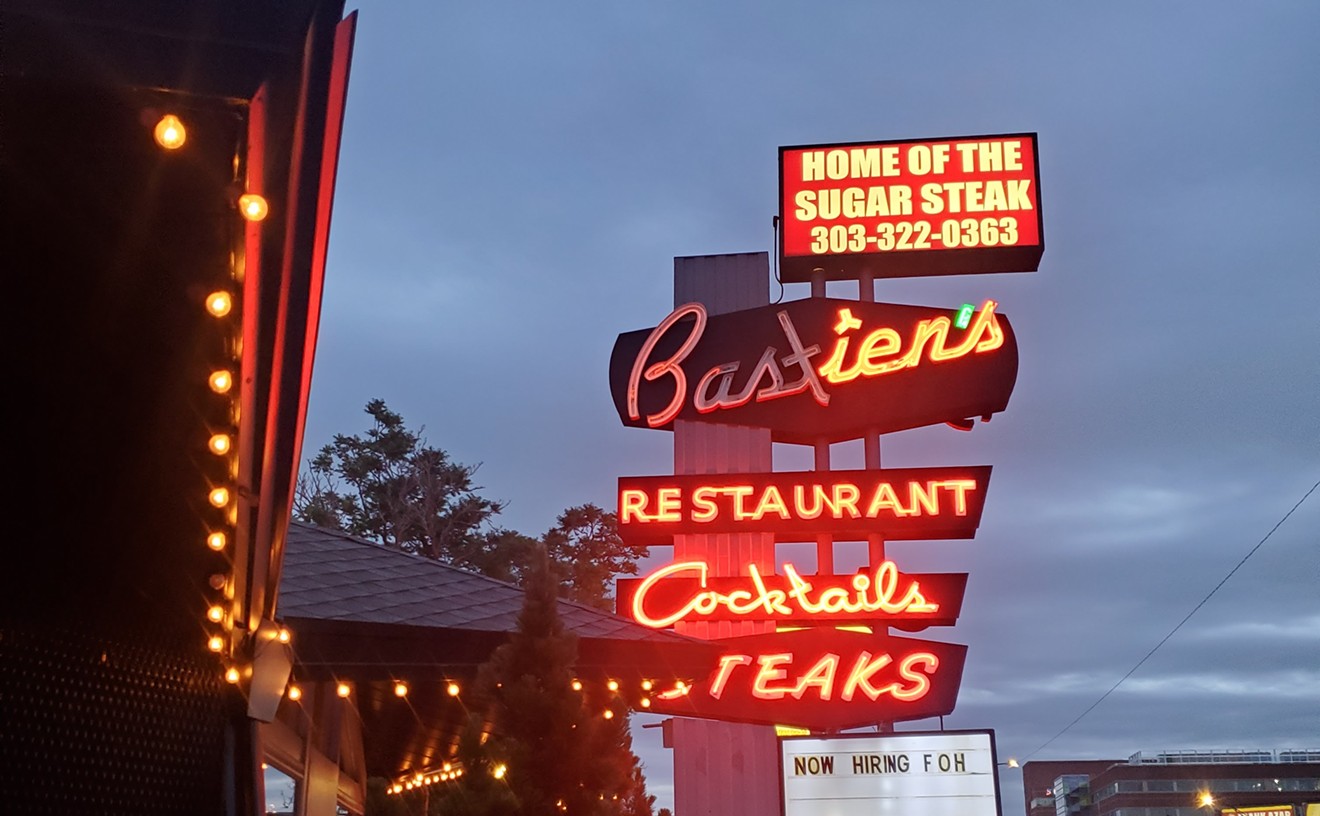 It's easy to think of Bastien's as a time machine perpetually dialed to 1958. That was the year Bastien's opened, and it's been run by the same family for the past five decades — which means it hasn't been subjected to the regular remod­eling that comes with new owners trying to hook trendy prima diners. From the outside, the folded-plate roof and neon-embellished sign reflects Denver architect Bernard N. Cahlander Jr.'s interpretation of the Googie movement of Southern California coffee-shop design. And now those touches have landed the building on the National Register of Historic Places. Once the very definition of contemporary, the sunken circular bay, the hemispherical skylight and the metal screens seem as quaint as the tufted ottomans in a Victorian mansion — and they're just as important to preserve.

Who knew marketing geeks could be so much fun? The Denver Egotist blog bills itself as a one-stop shop for news and job opportunities relating to Denver's advertising and marketing scene. But the people behind it — Denver Egotist doesn't reveal the names of those involved — don't mind getting down and dirty when the need arises. Take the Great Chipotle War of 2009. Last year, when the local burrito-chain-done-good unveiled a new "Low Roller" menu and marketing campaign and did away with its long-cherished, big-ass foil-wrapped burrito ads, the Egotists took it personally. That's why they launched a counter-offensive on Cheapotle.com, a site full of hypothetical ads with slogans like "Bring back the ads with balls" and "Your new ad campaign is made with 100 percent chicken shit." Who knows? Maybe Cheapotle was one of the reasons Chipotle soon toned down its "Low Roller" campaign. After all, hell hath no fury like an ad guy scorned.

No Texting While Driving