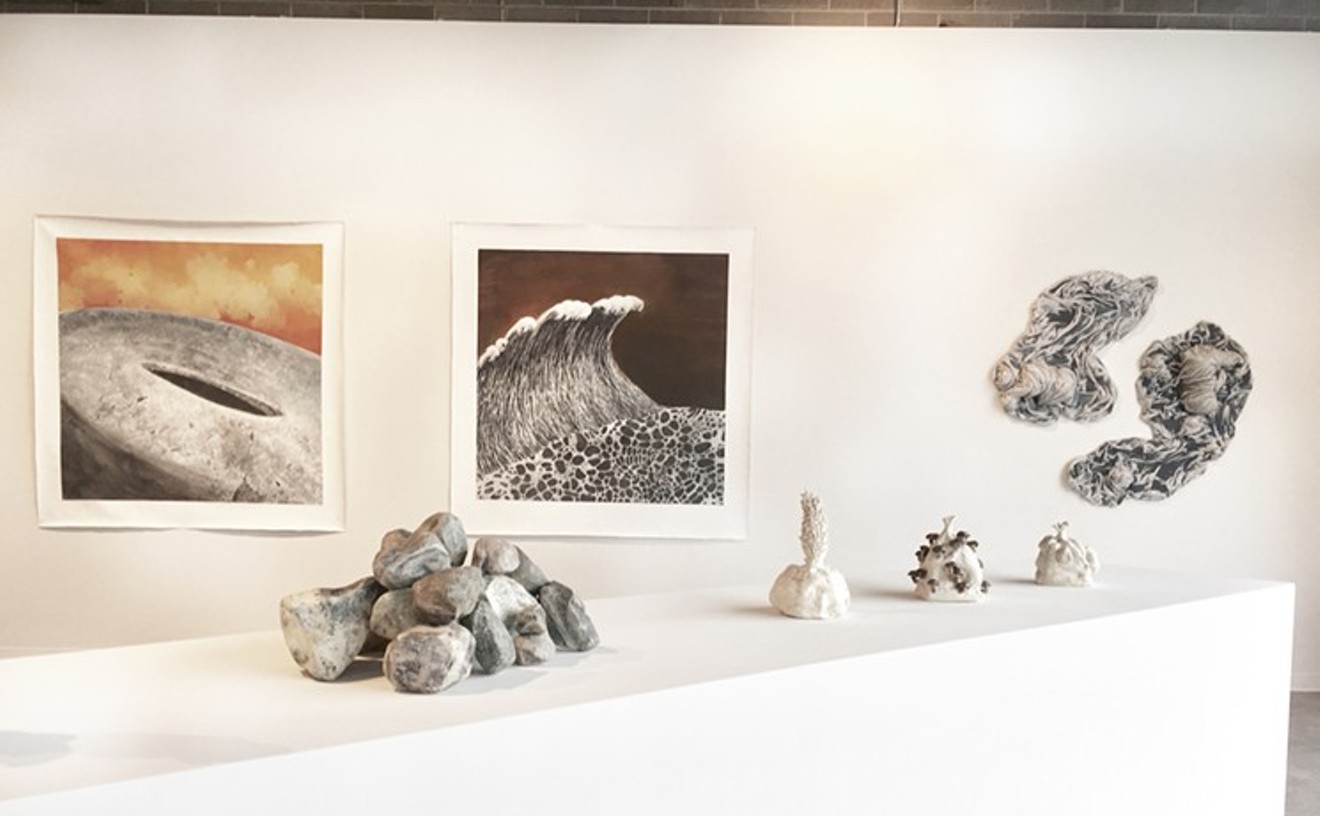 The late Dale Chisman was a giant in Denver's art world. Not only was he one of the state's most significant abstractionists, he was also an advocate for the arts who championed the work of emerging artists and was among the founders of Museum of Contemporary Art Denver, where his memorial service was held shortly after he died in 2008. Soon afterward, plans were laid for a show saluting Chisman's own astounding contributions. The resulting exhibit, mounted at RedLine, was organized by Jennifer Doran, co-owner of Robischon Gallery, which represents the artist's estate. It was an over-the-top effort, not just because of the high quality of works in the show, but also because the organizers pulled out all the stops. Dale Chisman in Retrospect included not just the painter's creations since the '70s, but a high-quality catalogue, a panel discussion, and even a jazz concert featuring a suite of tunes penned by Chisman's composer/musician son-in-law, Matt Jorgensen, responding to his life and work. This past year, there wasn't another solo that even came close to this retrospective. It was a fitting send-off to a fine artist.

Throughout September, Turner Jackson roamed the city wearing a sandwich board proclaiming "Freestyles Are Still Free." His guerrilla rapping approach showcased his ability to rap his face off at will and proved that the art of freestyle is not only alive and well, but integral to your rapping persona. Using pretty much anything around him at the time, Turner — who even filmed a freestyle with Joe Thunder in front of the Westword offices — displayed a frenetic pace and zealous energy, and the campaign came across as both charming and innovative. The few times we ran up on him spitting hot fire on the 16th Street Mall, he was surrounded by a crowd begging for more.

While living in the Bay Area, Scott Banning, an associate of Crash Worship, was a member of the Extra Action Marching Band and the San Francisco Taiko Dojo. But it wasn't until he decided to try to turn Itchy-O from a sit-down musical endeavor into something more visceral — and on the move — that he managed to combine his passions and experience into the perfect project. Initially playing as a surprise guest at other shows, Itchy-O Marching Band has become an unexpected and frequent presence at a broad swath of public events, one that has brought smiles to many faces with its solid marching-band instrumentation and experimental electronic accompaniment.

Son of the Crack Era

Given how popular his city anthem has become, it's a bit surprising that Mr. Midas hasn't enlisted a chorus to walk behind him and chant the hook to his uber-catchy "Run My Town." The killer single released early from his full-length album Son of the Crack Era, "Run My Town" gave an immediate glimpse into the authentic material that Midas had planned for the record — and he more than delivered on that promise. His account of the struggle and his optimism throughout the disc set his account of 'hood politics apart from the typical crack tales. Plus, on the track "Tender Kisses," he shouted out the grandmother who raised him with such sincerity that it could almost have been Tupac's "Dear Mama" 2.0.

Soulz of the Rockies

Denver has a rich and vibrant hip-hop history that extends back to the early '80s — from the days when seminal b-boy crews like D&S Connection, Radio Active and Dancers Unique first held it down to the years when hip-hop was kept alive by such latter-day torch-bearers as LOF (Lordz of Finesse), R-Sinareeo and GWT (Get With This). Likewise, the first and second wave of graf artists from the Reagan era paved the way for the kings of today — not to mention all the dope DJs and MCs who have helped elevate the game over the years. Much of that early history is documented in Musa's Soulz of the Rockies documentary, with interviews from many of those intimately involved in the early days of the scene. A must-see for fans of local hip-hop.

Sucks to Be You

The rhymes on Sucks to Be You were originally supposed to appear solely on the oft-delayed Fuck Foe mixtape, which was scheduled for release last summer. But the process of putting out the mixtape proved far more tedious than originally planned, and FOE ended up collaborating with Qknox to produce and remix Sucks to Be You. And like Frankenstein, the two created a monster. FOE's rapping is taken to another level by Qknox's production, particularly on songs like "Fuck Boy," an anti-lame ditty that sounds almost classy in its dis. The immaculate sound quality makes Sucks to Be You an ideal remix that definitely does not suck.

If Frank Sinatra produced hip-hop songs, Qknox, one-third of the beat-making/production team GirlGrabbers, would be his direct offspring. Classy, charming, debonair and erudite, Qknox taps into his inherent love for music in order to deliver some of the most progressive and distinctive hip-hop translations to come out of Colorado. Displaying exceptional flair on several hit-making projects, including FOE's Sucks to Be You and Debriefing and Cocktails, by GirlGrabbers, Qknox has developed an individual production touch that is unmistakable. The brilliance of his production almost sneaks up on you — but once it takes hold, the Qknox imprint cannot be denied.

Last summer, sketches of various members of the local hip-hop scene — they looked like expertly illustrated police composites — started cropping up as avatars on Facebook, on the pages of everyone from local DJs like Lazy Eyes to local rappers like A.V.I.U.S. The resemblance to these luminaries was uncanny, and everyone instantly wanted to know who was responsible for the drawings. The answer? They were done by Thomas Evans (Hip-Hop Congress) as part of the Colorado Stand Up project, an ambitious effort dedicated to highlighting individual members of the local hip-hop community — everyone from activists, supporters, educators and organizers to MCs, DJs, dancers and graf artists. And with this project, Evans has certainly earned his place among them.

Not every couple chooses to open a gallery in their own home, but leave it to design-savvy Tran and Josh Wills to do just that. No sooner had they finished fixing up and settling into their urban family dream home in RiNo, but they opened up Super Ordinary Gallery in hopes of promoting downtown style, artists and ideals to the public. These are people who get things done: Tran, a Westword MasterMind, is the brain behind the former Fabric Lab and a zillion other local fashion, art and design projects; Josh is a forward-thinking graphic designer. So despite its name, we're expecting big things from Super Ordinary.

Best Hope for the Future

The Denver Center Theatre Company introduced its New Play Summit five years ago, and it continues to give us hope for the future of theater in this town. This year's incarnation featured two premieres based on last year's staged readings: The Catch and Map of Heaven. Four fascinating — and entirely unique — new plays were read for possible full production this season, with their playwrights commenting afterward on how much they cherished the freedom and support of the New Play Summit. Denver's own Buntporters experimented with tech as they explored the work of Nikola Tesla; a panel discussed the mind-blowing possibilities that digitization brings to live theater; and actors, techies, directors and theater fans thronged the corridors, chatting enthusiastically about what they'd just seen and hoped to see again.