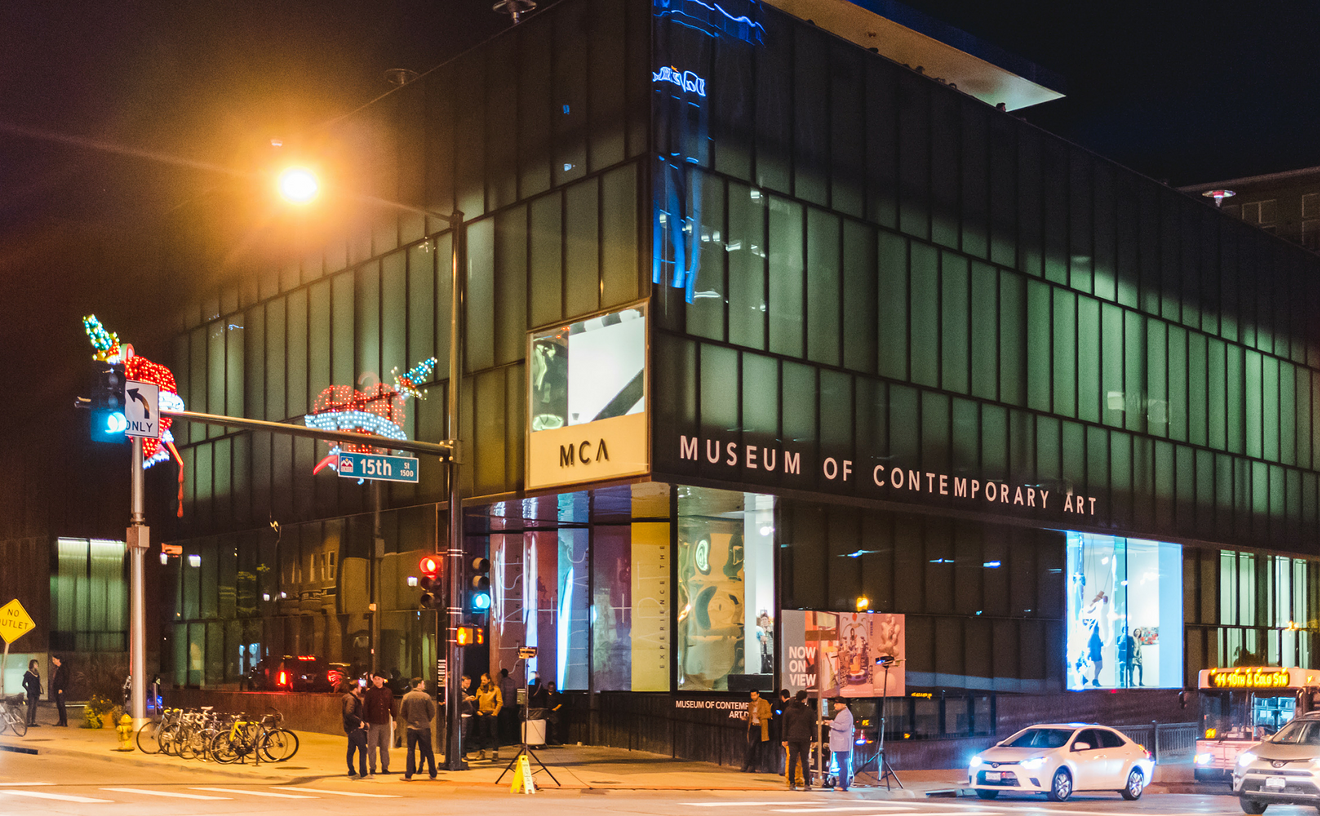 Christo and his late wife, Jeanne-Claude, first achieved worldwide fame with "Valley Curtain," a project they carried out in Colorado in the 1970s. For that massive work, the pair suspended an enormous drapery across Rifle Gap in the western portion of the state. Thirty years later, they again looked to Colorado for what will surely be one of their last pieces, "Over the River." To explicate and promote this proposal, the Museum of Contemporary Art Denver presented a spectacular show of Christo's stunning presentation drawings. If the project comes to fruition (the final decision is due this spring), "Over the River" would comprise canopies of silvery fabric stretched across the Arkansas River in southern Colorado. And judging from the Over the River show, Colorado could be in for one of the best art events in its history, one that would rank right up there with "Valley Curtain."

As an engineering student at the prestigious School of Mines, Tim Weilert has no business being a successful blogger. It's hard to imagine how he finds the time to write about local music on Something Like Sound. At least for the first part of the blog's existence, he had help: Together with Spencer Nelson and Jake Rezac, he built a go-to destination for show reviews and an expertly picked selection of local releases. Something Like Sound even managed to release a pair of free compilations, both featuring all-star lineups. When Weilert graduates in May, it's unlikely that anyone will be able to replace him on this Mines blog. But he's drilled deep over the past two years, and exposed as rich a vein of music blogging as you're likely to find.

There have been innumerable visually stunning, cool-looking videos made in the history of the format, but rarely is an idea alone impressive. Cue up the Gamits' video for "This Shell" in your browser, though, and you won't be treated to a flashy video; instead, you'll find yourself trying to piece together a puzzle. If you complete the game quickly enough, you'll win a download of the track. The idea is simple, but absolutely brilliant from a technological and marketing standpoint — and as a bonus, this may very well be one of the only music videos in existence that's actually fun to watch.

Best Name-Check by a Classic-Rock Legend

Nathaniel Rateliff has had a banner year. He became chummy with Mumford & Sons and made tons of other friends on the road, including such kindred artists as the Delta Spirit. On the strength of his excellent Rounder Records debut, In Memory of Loss, the erstwhile Born in the Flood frontman captured the attention of everyone from Amazon.com, which listed his album as the number-one album you might have missed in 2010, to the New York Times, which pushed his show in the Big Apple, to Mojo, which gave his record a four-star review. But his biggest coup to date — and there's a certain irony attached to this — is the fact that Robert Plant (cover boy of the Mojo featuring the four-star review) listed Rateliff's song "Early Spring Till" at number one on his celebrity iTunes playlist, calling it "empty, fragmented and poignant."

Thurston Moore and Byron Coley surprised just about everyone when they picked local band Caldera Lakes (aka Eva Aguila and Brittany Gould) as one of their favorite things in their monthly Tongue Top Ten column in Arthur magazine last year. And later, when Sonic Youth played the Ogden Theatre, rather than have a more conventional touring band open the show, the alt-rock greats invited Caldera Lakes to open. The gesture not only highlighted the quality of that duo, but also showed that Thurston Moore is still connected to real underground music.

If you ever had the pleasure of seeing Fellow Citizens perform their ambitious and atmospherically charged pop songs, you can be excused for not expecting what any members of that band might bring to Kevin Costner Suicide Pact. The name of the act is humorous, but it also suggests that the music has a serious side. And while it's doubtful that the three members of this band grew up listening to Hearts of Space late at night on NPR, you can hear strains of the types of soundscaping that Steve Roach would have explored. Essentially combining ambient space rock with noise, Kevin Costner Suicide Pact is one to keep.

BLKHRTS has been around, at least in theory, for the better part of a year — but it wasn't until this past January that it really found its legs. Until then, BLKHRTS (formerly Black Hearts) was rightly considered by most to be just a side project of Yonnas Abraham, and the group — Abraham, FOE, Karma and Catch Lungs — only made occasional cameos at Abraham's performances with The Pirate Signal. This year, however, brought BLKHRTS' debut recording, BLK S BTFL, an utterly riveting rap-rock hybrid that centers on Abraham's retro-futuristic production, which is both unique and progressive. And live, the crew brings an unbridled energy that's as ferocious as Onyx, as primal as Body Count and as frenzied and unhinged as Bad Brains. BLKHRTS is clearly no longer anybody's side anything. Here's what it is: the most exciting band to emerge in the past year.

After close to a twenty-year run as the Snake Pit, this Capitol Hill hangout got a much-needed makeover before it opened as Beauty Bar last June. Based on the original Beauty Bar concept that got its start in New York in 1995, Denver's Beauty Bar (there are similar clubs in Los Angeles, San Diego, San Francisco and Las Vegas) was brought to life by partners Noah Ray McMahan, Justin Martinez and Mike Barnhart, who turned the 3,200-square-foot space into a sparkly new club that captures the '50s beauty-parlor aesthetic of the original bar. Some of the furniture was salvaged from old salons, while booths and chairs left over from the Snake Pit era were reupholstered in black and silver glitter vinyl by a lowrider shop. Armed with a killer KS Audio sound system, the main room is a great spot for dancing to resident DJs or the nationally known spinners who occasionally pop in.

Had Katrina Ford stayed dark and spooky after she parted ways with Lovelife and formed Celebration, that act might have developed a sound similar to that of Holophrase. The angular chilliness of early Magazine and the caustic psychedelic sound of Damon Edge-era Chrome can also be heard as ghostly influences on this band's overall sound. Stirringly haunting, Holophrase brings together exotic vocals and beautifully menacing instrumentation. Blessed with the enigmatic poise and intensity of a post-punk band of old, the quartet is sure to confirm every suspicion of its gift for darkly beautiful compositions on its upcoming EP.