We first met John Hickenlooper when he was an unemployed geologist with a big idea: to put Denver's first brewpub in a very sleepy section of LoDo. Most of the rest of Denver first encountered him at the Wynkoop Brewing Company, which poured out great craft beers while Hickenlooper, always quick with a quip, poured out idea after idea. Keeping the name Mile High at the new football stadium, for example: That's the campaign that launched Hickenlooper's run for mayor eight years ago, when his come-from-behind start led to a surprisingly easy victory. Surprising, that is, only for those who hadn't experienced Hickenlooper's energy and drive firsthand. And after pouring out idea after idea at City Hall, Hickenlooper moved up the hill to the State Capitol in January. We can't wait to see what ideas spill out of the governor's office next.

"It will offend everyone," promises the slogan of The Book of Mormon, and we'd expect nothing less from Trey Parker and Matt Stone, the Colorado-born and -bred bad boys who gave the country South Park and Team America and now have a hit on their hands with a Broadway musical based on two Mormon missionaries in Africa that satirizes everything from religion to The Lion King, but with a kind of savage smarts and sweetness we like to think is emblematic of our state. "We wanted to make this not just cynical and Mormon-bashing, but hopeful and happy," these local boys made very good told the New York Times. America...fuck yeah!

Best Guess for Who Will Be Denver's Next Mayor

Sixteen months ago, nobody really thought that Denver would be voting for a new mayor in May 2011; John Hickenlooper looked like a lock for a third term. But then Governor Bill Ritter decided not to run again, setting off a game of political dominoes that resulted in Hickenlooper's moving up while a slew of candidates who'd been eyeing City Hall jumped into the mayor's race. Ten made the ballot; former state senator Chris Romer, who's been leading the pack in fundraising, was the first to break into solid double digits on a poll of likely voters. But even with the election only a month off, it's too early to make a solid prediction, except this: Since early front-runners rarely win, Denver's next mayor will not be Chris Romer.

Karen Leigh joined the KCNC team as co-anchor in 2008, and it now looks like she has a long career ahead of her — as long as she keeps her flowing tresses. At this point, Leigh's luxurious, lustrous locks seem as suited to a beauty-pageant contestant as they do a news anchor, but viewers have clearly flipped for her long, grown-out flip. Back in Minnesota, she might have needed all that hair to stay warm; here, it's just made her hot.

"Chris is like a box of chocolates," promises Chris Parente's KDVR profile. "You never know what you're gonna get." But no matter how wild and wacky Parente's live reports might be, you can count on this: His hair is going to look delicious, with just the right amount of product to keep his coif in perky place.

Best Job by a Short-Term Mayor

Hand-picked by John Hickenlooper to serve as deputy mayor while he ran for governor, and then to move up to mayor for the last bit of Hickenlooper's second term, then-Manager of Public Works Bill Vidal had big shoes to fill. So far, Vidal's not only found those shoes a comfortable fit, but picked up the pace, mapping out an ambitious agenda for his six months in office — starting with juggling remaining staffers for maximum efficiency, then moving on to clean up controversial cases still outstanding in the police and sheriff's departments. At the end of March, new Manager of Safety Charley Garcia fired the two officers involved in the DeHerrera beating in LoDo; next up, Vidal's administration will tackle the death of Marvin Booker at the Denver jail. A native of Cuba who spent time in a Pueblo orphanage, Vidal has a fascinating backstory — but we're more interested in seeing what he does next.

Best Move by a Politician

After Andrew Romanoff was term-limited out of his position in the Colorado House, he explored becoming Colorado's secretary of state, a job vacated by then-newly elected congressman Mike Coffman. He didn't get the job. Next he explored becoming a U.S. senator, a job vacated by newly appointed Obama cabinet member Ken Salazar. He didn't get the job. Then he challenged the man who did, Michael Bennet, in last year's primary...and lost. "In my own career," Romanoff says now, "I've sought opportunities in which I believed I could make the biggest difference." Finally, he made a move that could lead to the biggest difference yet: He left politics for a job with Lakewood-based International Development Enterprises, which makes agricultural training and technology available to the world's poorest people — one billion of whom live on a dollar a day or less. And that makes him a winner.

No, Denver's Ghost Historic District isn't haunted — unless it's by the specter of real-estate agents flocking to a neighborhood in "Denver's only ZIP code that hasn't seen a market dip since 2007." That's according to This Old House magazine, which just touted the area in northwest Denver bounded by West 29th Avenue, West 32nd Avenue, Lowell Boulevard and Irving Street that was recently added to the city's historic roster as one of the country's "great neighborhoods." The district's tree-lined streets are filled with great old houses — Denver squares, bungalows and Victorians, some dating back to when developer and real-estate agent Allen Ghost purchased the area in 1887 and turned it into a streetcar suburb, touting its "unsurpassed" location. Today the location is still unsurpassed, with a host of shops and restaurants just a few blocks away in still-hot Highland. 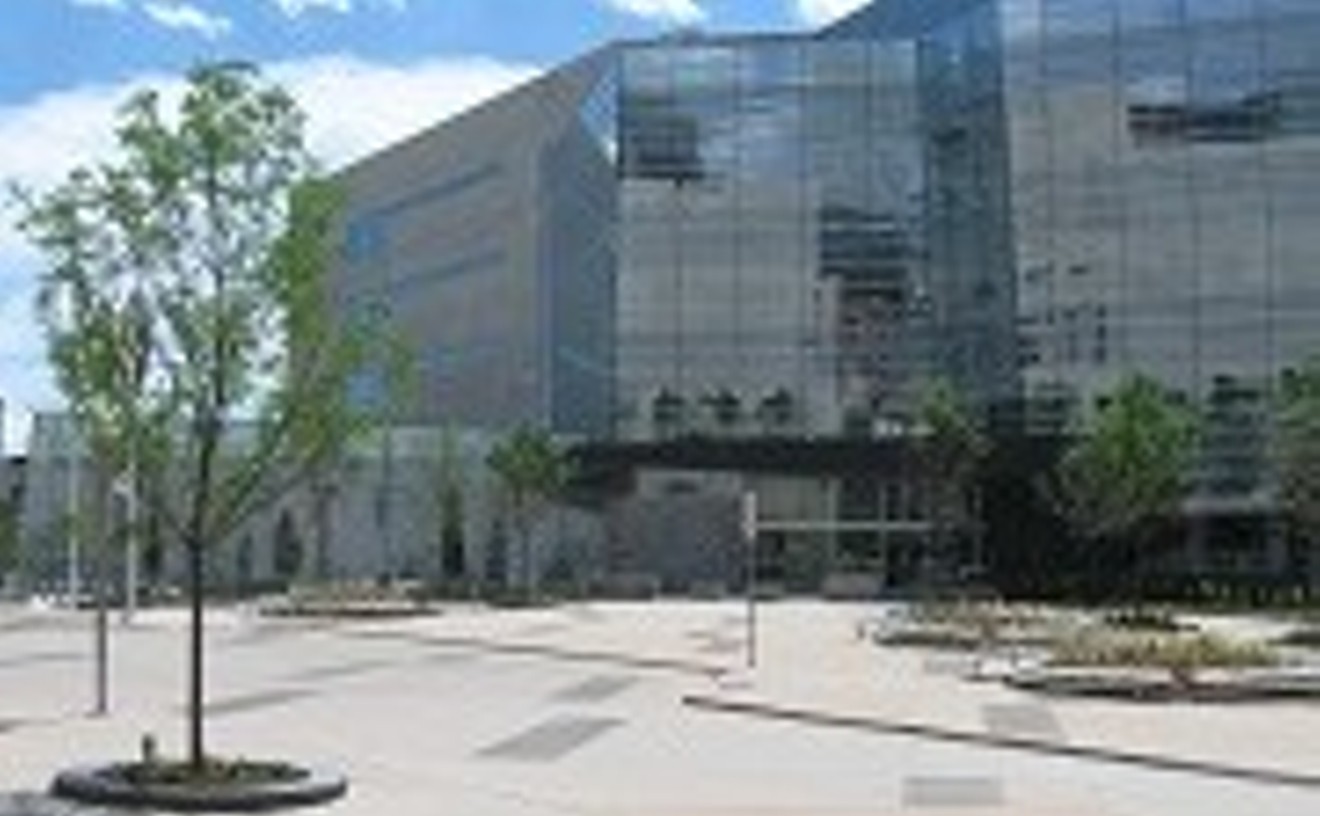 Though beset with controversies, including the departure of the original architect, Steven Holl, as well as being marooned in a disjointed complex that also includes a tacky shopping-center-style post office and a bombastic, Mussolini-style jail, the Lindsey-Flanigan Courthouse is clearly a masterpiece. All the credit for that success goes to Keat Tan, the building's principal designer and a partner in the Denver architecture firm klipp. Tan also did the Hyatt Regency Denver at the Colorado Convention Center, which is just blocks from the courthouse, and these two buildings alone make a strong case for naming Tan as one of Denver's premier architects. 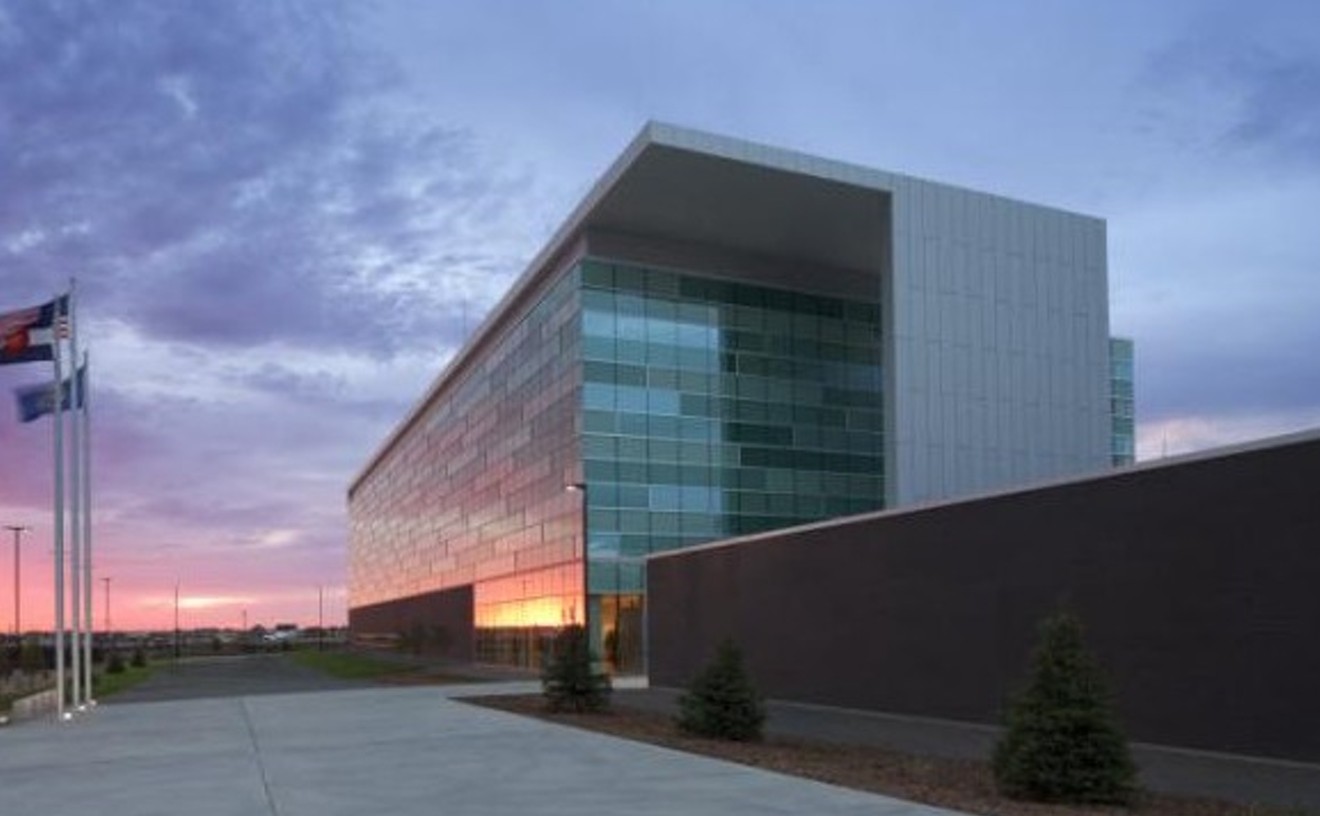 The architecture at Stapleton is a mixed bag, with much of it having a throwaway character. But not the FBI Field Office that opened last summer: It was built to last. The building, which was privately developed and is being leased to the FBI, was designed by Chicago's Skidmore Owings and Merrill, which also did the Air Force Academy as well as many oil boom-era skyscrapers in the city. Though made almost entirely of reflective glass, the Field Office is very secure — as might be expected, given its function — because believe it or not, those big window-walls are bomb-proof. But the building is also quite chic-looking, something that can only rarely be said about the G-Men and G-Women working inside.