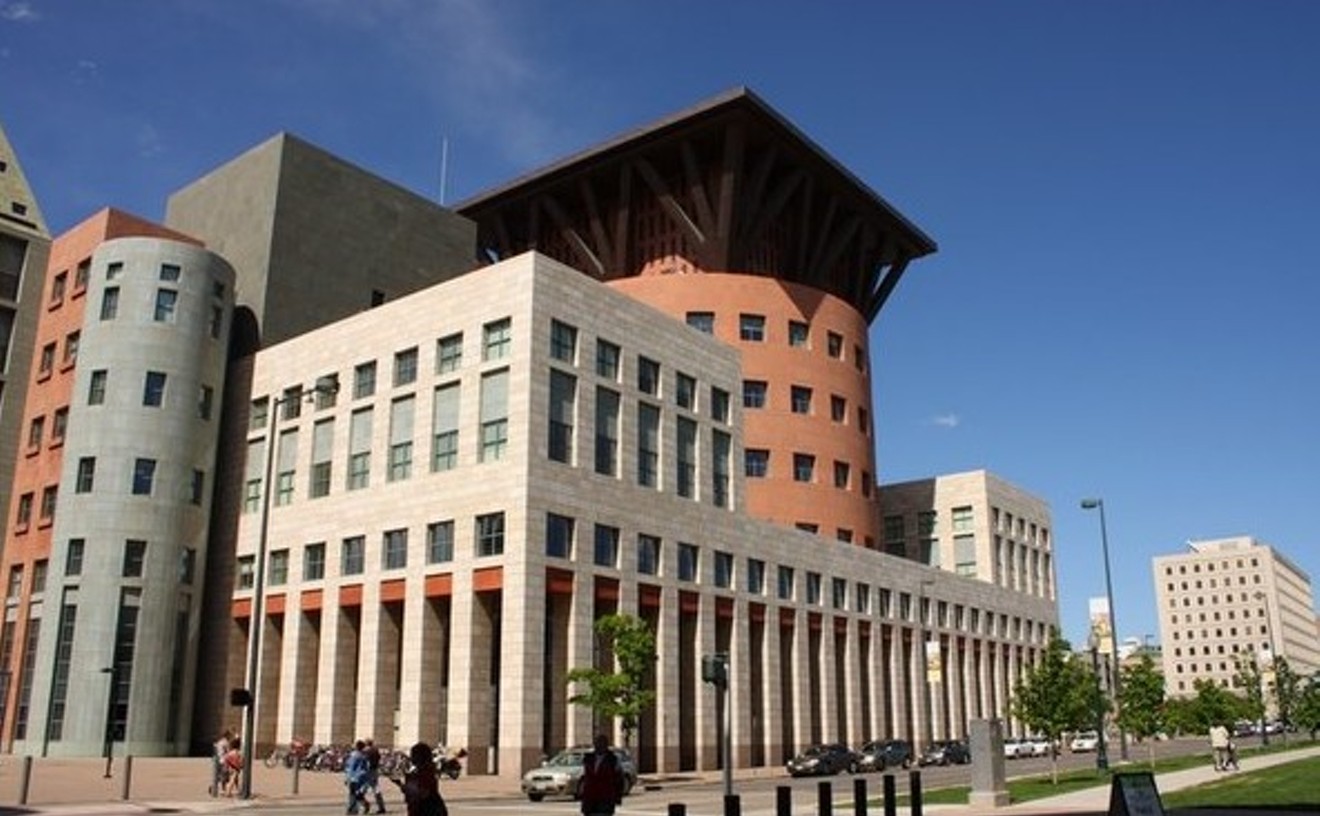 Libraries are changing quickly to meet the demands of an online age, but one welcome development at Denver's Central Library is oddly retro. DPL now allows patrons to check out items from its vast repository of government documents, so that the determined researcher can take home such pre-Internet jewels as Know Your 8-Inch Howitzer and Identifying Sheep Killed by Bears. Of course, the collection also includes considerable information on public lands, congressional hearings and reports on current topics, reliable health information and much, much more.

Lots of folks have jockeyed for the limelight as Colorado has become a mecca for medical marijuana, but one guy who doesn't get the praise he deserves is state registrar Ron Hyman. Over the past two years, Hyman has experienced the state's MMJ card application rush up-close and personal, since his office handles all the paperwork. Even as the backlog stretched into the tens of thousands and storage closet after storage closet had to be requisitioned to hold all the documents, Hyman maintained a superhuman good nature. And once legislators injected his office with much-needed funds to tackle the backlog, Hyman and his team came through with their promise to deal with all outstanding applications before the end of 2010. Mr. Hyman, this bud's for you.

Best Case of Mistaken Identity on the Denver Skyline

The Spire and the Four Seasons Hotel

Last summer, two high-rises were finished a few blocks apart on 14th Street, each making its mark on the skyline. But here's where things get interesting: One is a 41-story vertical stack of horizontally oriented glass rectangles, while the other relies on 45 stories of vertical thrusts that terminate in a spike mounted on the top. Strangely enough, the names of the buildings are the opposite of what you'd expect. The pile of glass rectangles is the Spire, while the one which actually has a spire is the Four Seasons Hotel. It would make for a good bar-room bet, even in a bar full of architects.

Best Charity for Human and Beast

The Front Range is blessed with many worthy organizations that help animals and veterans; Freedom does both at the same time. Since 1987, the organization has excelled at rescuing shelter dogs, training them in a range of special skills, and pairing them with people with emotional or physical disabilities, including combat veterans. The demand for service dogs keeps increasing, but the group's dedicated core of volunteers has proven up to the task. Freedom boasts an amazing hundred-percent placement rate; dogs that wash out of the exacting training program find adoptive homes elsewhere.

There's quite a yarn behind the Ladies Fancywork Society, a group of rogue crochet artists who've been stringing us along for the past few years with their guerrilla art installations. They've created leg warmers for Jonathan Borofsky's "Dancers" (better known as the Dancing Aliens) in front of the Denver Performing Arts Complex, created a Wild Garden on a 360-foot-long stretch of chain-link fence behind Union Station, put cowls on the "Scottish Angus Cow and Calf" outside the Denver Art Museum, and beautified odd bike racks and benches around town. But the best is yet to come: These savvy street artists have big plans for April Fool's Day. Denver's looking good, and the Ladies Fancywork Society is a big reason why.

We first met John Hickenlooper when he was an unemployed geologist with a big idea: to put Denver's first brewpub in a very sleepy section of LoDo. Most of the rest of Denver first encountered him at the Wynkoop Brewing Company, which poured out great craft beers while Hickenlooper, always quick with a quip, poured out idea after idea. Keeping the name Mile High at the new football stadium, for example: That's the campaign that launched Hickenlooper's run for mayor eight years ago, when his come-from-behind start led to a surprisingly easy victory. Surprising, that is, only for those who hadn't experienced Hickenlooper's energy and drive firsthand. And after pouring out idea after idea at City Hall, Hickenlooper moved up the hill to the State Capitol in January. We can't wait to see what ideas spill out of the governor's office next.

"It will offend everyone," promises the slogan of The Book of Mormon, and we'd expect nothing less from Trey Parker and Matt Stone, the Colorado-born and -bred bad boys who gave the country South Park and Team America and now have a hit on their hands with a Broadway musical based on two Mormon missionaries in Africa that satirizes everything from religion to The Lion King, but with a kind of savage smarts and sweetness we like to think is emblematic of our state. "We wanted to make this not just cynical and Mormon-bashing, but hopeful and happy," these local boys made very good told the New York Times. America...fuck yeah!

Best Guess for Who Will Be Denver's Next Mayor

Sixteen months ago, nobody really thought that Denver would be voting for a new mayor in May 2011; John Hickenlooper looked like a lock for a third term. But then Governor Bill Ritter decided not to run again, setting off a game of political dominoes that resulted in Hickenlooper's moving up while a slew of candidates who'd been eyeing City Hall jumped into the mayor's race. Ten made the ballot; former state senator Chris Romer, who's been leading the pack in fundraising, was the first to break into solid double digits on a poll of likely voters. But even with the election only a month off, it's too early to make a solid prediction, except this: Since early front-runners rarely win, Denver's next mayor will not be Chris Romer.

Karen Leigh joined the KCNC team as co-anchor in 2008, and it now looks like she has a long career ahead of her — as long as she keeps her flowing tresses. At this point, Leigh's luxurious, lustrous locks seem as suited to a beauty-pageant contestant as they do a news anchor, but viewers have clearly flipped for her long, grown-out flip. Back in Minnesota, she might have needed all that hair to stay warm; here, it's just made her hot.

"Chris is like a box of chocolates," promises Chris Parente's KDVR profile. "You never know what you're gonna get." But no matter how wild and wacky Parente's live reports might be, you can count on this: His hair is going to look delicious, with just the right amount of product to keep his coif in perky place.