Brothers Dave and Erik Peterson love beer. That's why they added a brewery in 1997 to the venerable Glendale watering hole that their dad and uncle started in 1971. This year, the Petersons took that love and hopped it up with a tableside trick — they're calling it Whole Hops Infusions — that allows customers to experiment with the subtleties of beer's fragrant flower. Here's how it works: Order a Bull & Bush beer on tap and then pick one of five hops varietals grown by Jack Rabbit Hill Hops near Hotchkiss. The beer is served in a French press with the crumbled hops cones added. The customer can choose how long to wait before pouring the beer and tasting the effect. A one-minute wait will add a bit of flavor; three minutes will infuse a significant amount; and five minutes will give you an eye-opening hop wallop. It's a heady idea whose time has come. 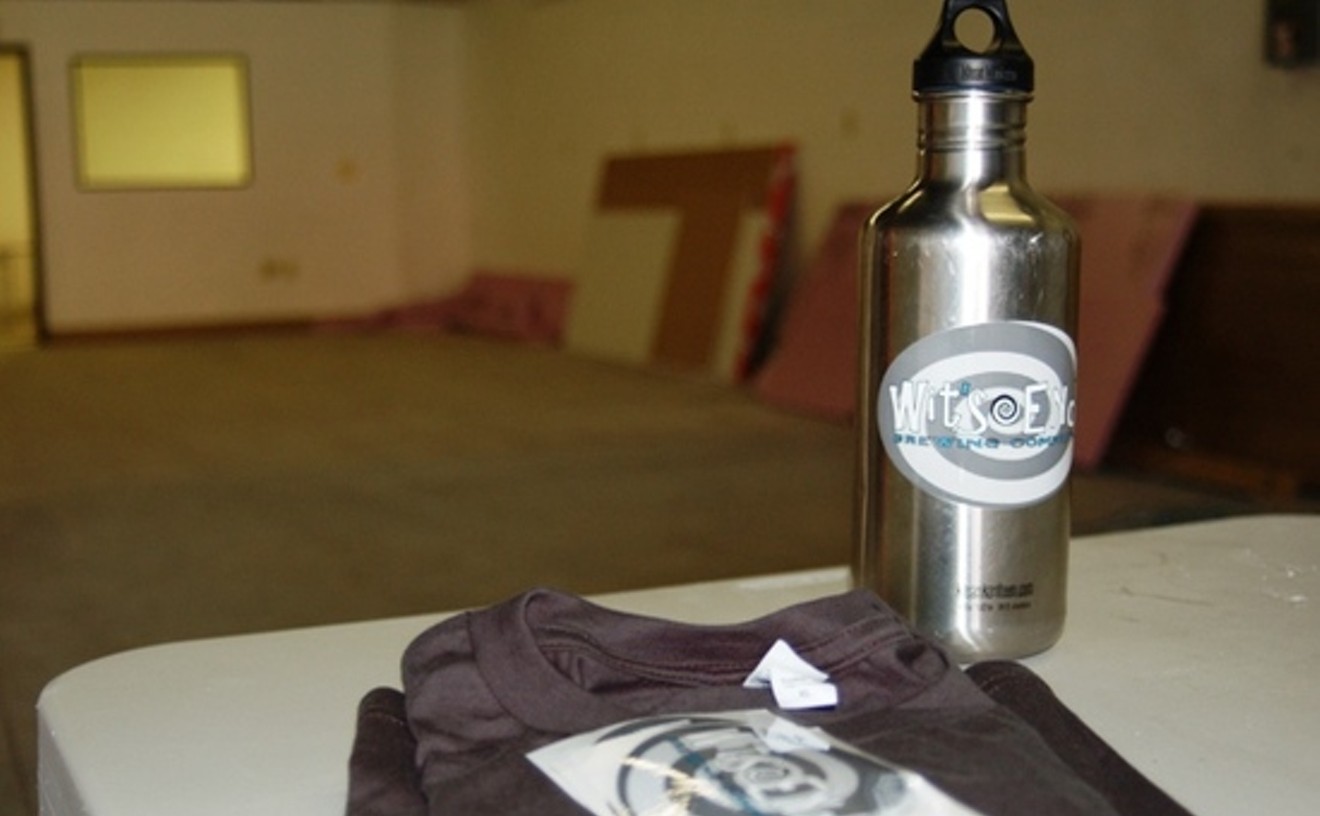 Growlers, those familiar glass jugs that allow beer-drinkers to take their suds to go, have been around for as long as, well, for as long as people have been drinking beer. But 64-ounce modern growlers can be unwieldy and impractical, and that often let beer go flat within a day. Enter Wit's End Brewing's stainless-steel forty-ounce canteens. You can buy one for $20 (including your beer) and refill it whenever you want for $9. (Between fills, you can use it for water or whatever other liquid makes you happy.) A heavy-duty o-ring should keep the beer fresh for at least two weeks. "And besides," says brewery owner Scott Witsoe, "we couldn't pass up on the irony of a craft brewery selling beer in forties." 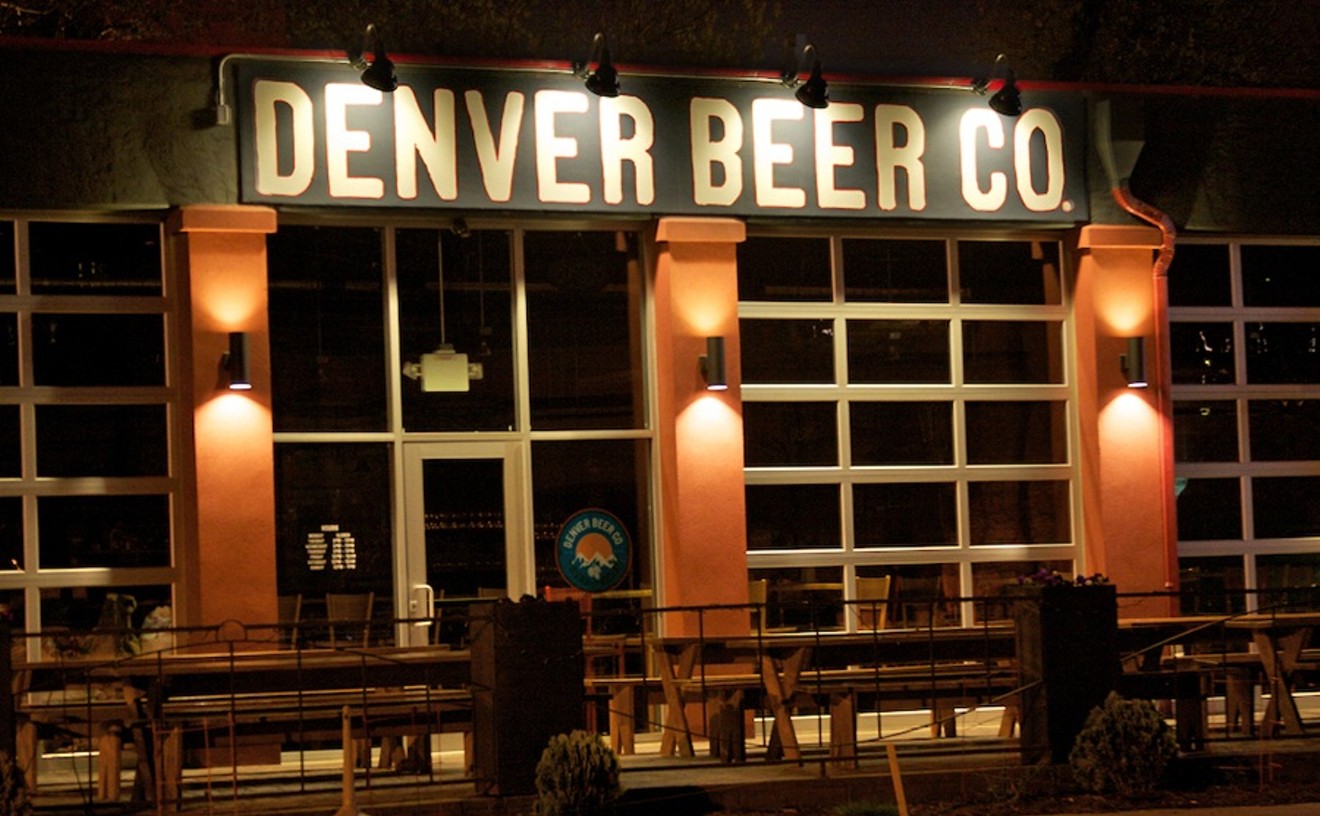 When Denver Beer Co opened last August, owners Charlie Berger and Patrick Crawford wanted to do something different, and they have largely stuck to their vision of constantly brewing new recipes, almost never returning to the tried and true. While that occasionally frustrates fans of one beer or another, it's easy to forget your cares while sitting inside the airy, comforting space or outside in the gorgeous Platte Street beer garden — just blocks from where Denver itself bubbled to the surface in 1858. But the liquid gold here is the beer, and Denver Beer Co has already had some success with its brews, winning a bronze medal for its Graham Cracker Porter at the 2011 Great American Beer Festival — a beer that Berger and Crawford decided, thankfully, to make an exception for and brew again...and again. 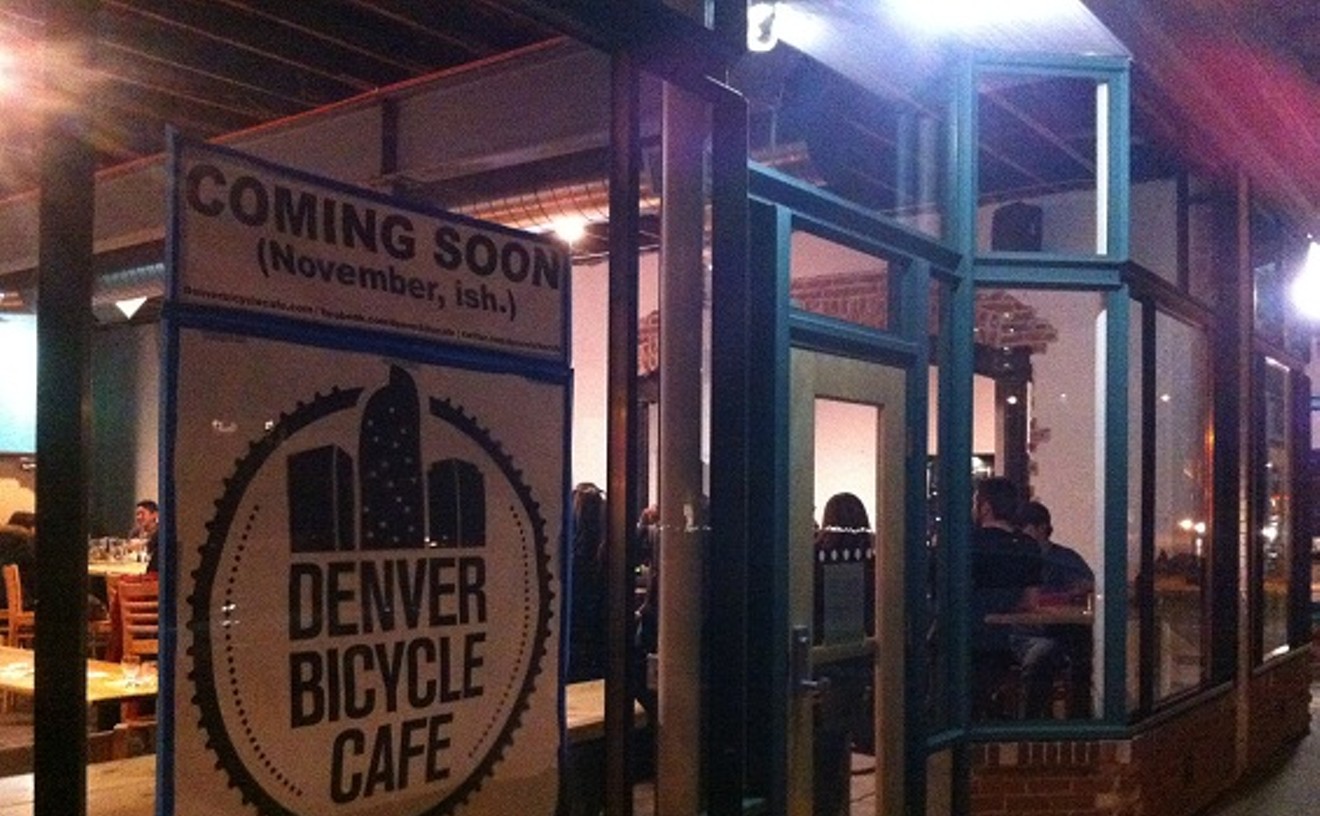 Drop by the Denver Bicycle Cafe for a bottomless cup of coffee from a local roaster, a freshly baked cookie or even a pint of Colorado craft beer, all welcome components of a solid neighborhood cafe. But where this place really pulls ahead of other new coffee shops is the other side of the business: While you enjoy your cappuccino, you can get your bike serviced by a pro. Partners Peter Roper, Jessica Caouette and Lucas Spaulding wanted to combine their love of cycling and cafe culture to create a community, and that's exactly what they did with the Denver Bicycle Cafe. The most delicious thing here might be the conversations you have with like-minded customers as you share stories about the delights of the Denver lifestyle. More than 300 restaurants opened in metro Denver last year, and many of them added something new and special to an already vibrant dining scene. But none did it with the aplomb of Pinche Taqueria, a raucous, irreverent spot that grew out of Kevin Morrison's highly successful food truck. The menu here is focused and simple, featuring an array of gringified tacos packed with succulent meats and punchy flavors, as well as a handful of appetizers and the best churros we've ever tasted; the bar program is a frequently evolving homage to tequila, whiskey and debauchery. But this restaurant is so much more than a sum of its parts: Every time we stop by, we love it a little bit more. Pinche Taqueria feeds more than our bellies: It feeds our imagination, letting us enter someone else's magical world for a while so that we remember, again, what dining out is all about. 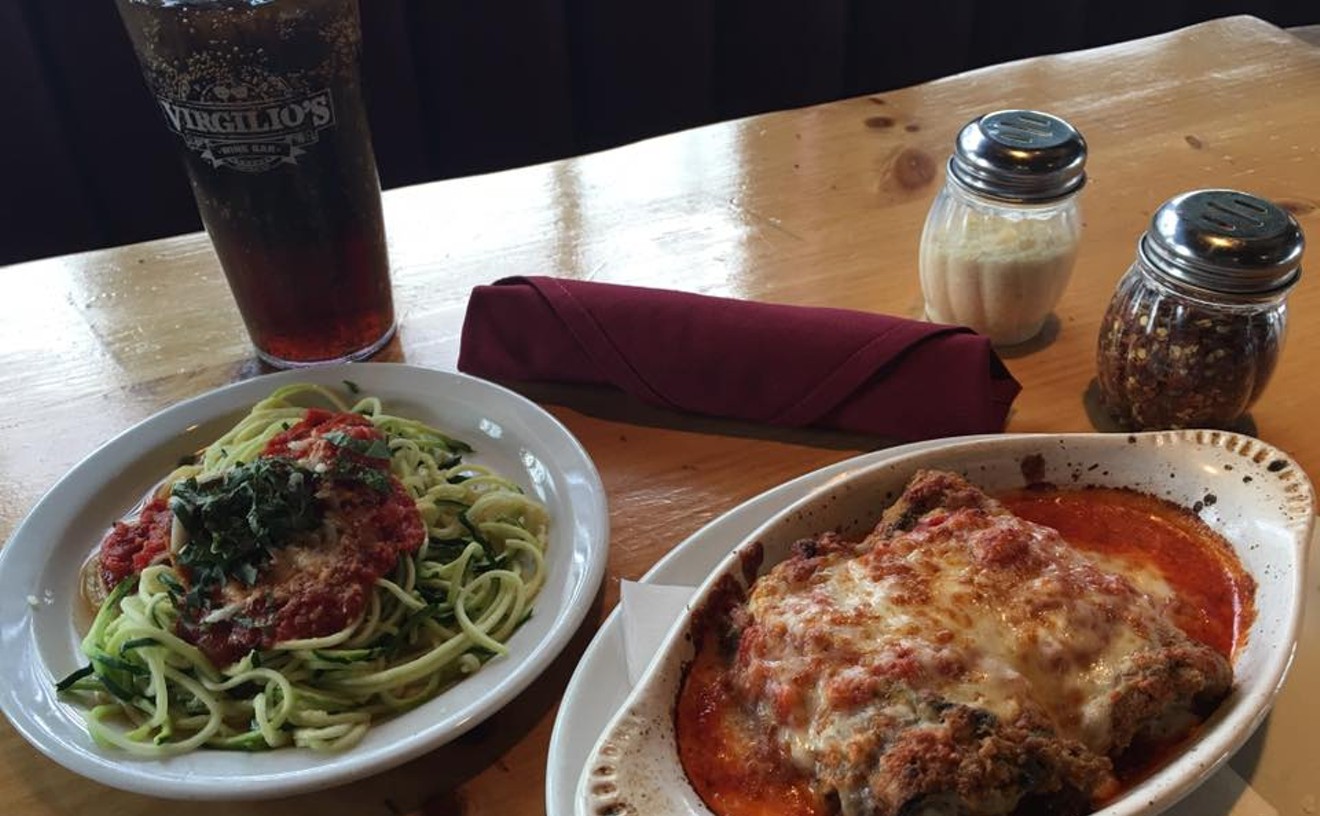 If you want a perfectly pleasant conversation to turn contentious, just mention the word "pizza" and watch the dough fly. Or you can just shut your piehole and plop yourself down at Virgilio's, where the New York-style pizzas are generally known to silence even the most severe skeptics. The pizzas — sturdy, slightly raised, requisitely chewy and uniformly tinged golden — are staunchly traditional (seekers of Brussels sprouts or ornamental orange blossoms should fuhgeddaboutit), and the lightly herbed sauce, a judicious balance of acidity and sweetness, paves the way for classic toppings like sausage and pepperoni, onions and olives. With so many frou-frou pizzas littering menus these days, the pies at Virgilio's are a welcome journey down memory lane.

It's not exactly convenient to jump on a plane every time you get a hankering for Panang curry, so we've spent some serious hours searching out a local replacement. Enter Thai Flavor, where you can get a brimming bowl of Panang curry, creamy and caramel-colored, pungent and peppery, swimming with tender strips of pork, scallions and basil, and laced with a chile-infused heat that's checked — somewhat — by the natural sugar of coconut milk, the savory bite of garlic and the tangy nip of a freshly squeezed lime. With a side of sticky rice, it's almost as good — almost — as a curry you'd find on the banks of the Mekong in the north of Thailand.

It's easy to go crazy at the pastry case at Wooden Spoon, a tiny bakery tucked into a row of Highland storefronts. Every time we stop in, we want to order one of almost everything. We can't pass up the macarons; the egg white-and-almond-based cookies, filled with buttercream, melt away into nothing on the tongue. Nor can we turn down a lemon meringue mini-pie, the individual-sized flaky crust packed with smooth, tangy lemon filling and topped with ethereally light peaks of meringue. The cinnamon rolls, troweled with tart cream-cheese icing, are not to be missed; the turtle is a rich, sticky mix of chocolate, caramel and pecans. And while you may only be able to take about three bites of the chocolate dome, they'll be three glorious spoonfuls of dense chocolate ganache encrusted with chocolate fondant on a thin chocolate cookie.

Gaia Bistro is one of the homiest restaurants around, not least because it's actually located in an old home. The inside is cozy and comfortable — especially in the winter, when the warren of rooms creates a warm, welcoming haven — but Gaia shines brightest outside. You can eat on the planter-lined patio or at one of the tables scattered across the expansive lawn; when summer settles over the Mile High City, these outdoor areas are always packed on weekends. But on cool weekend mornings, the deck is empty — and when you have a French press full of coffee, one of Gaia's housemade pastries and a newspaper before you, this can feel like the most perfect place in the world. 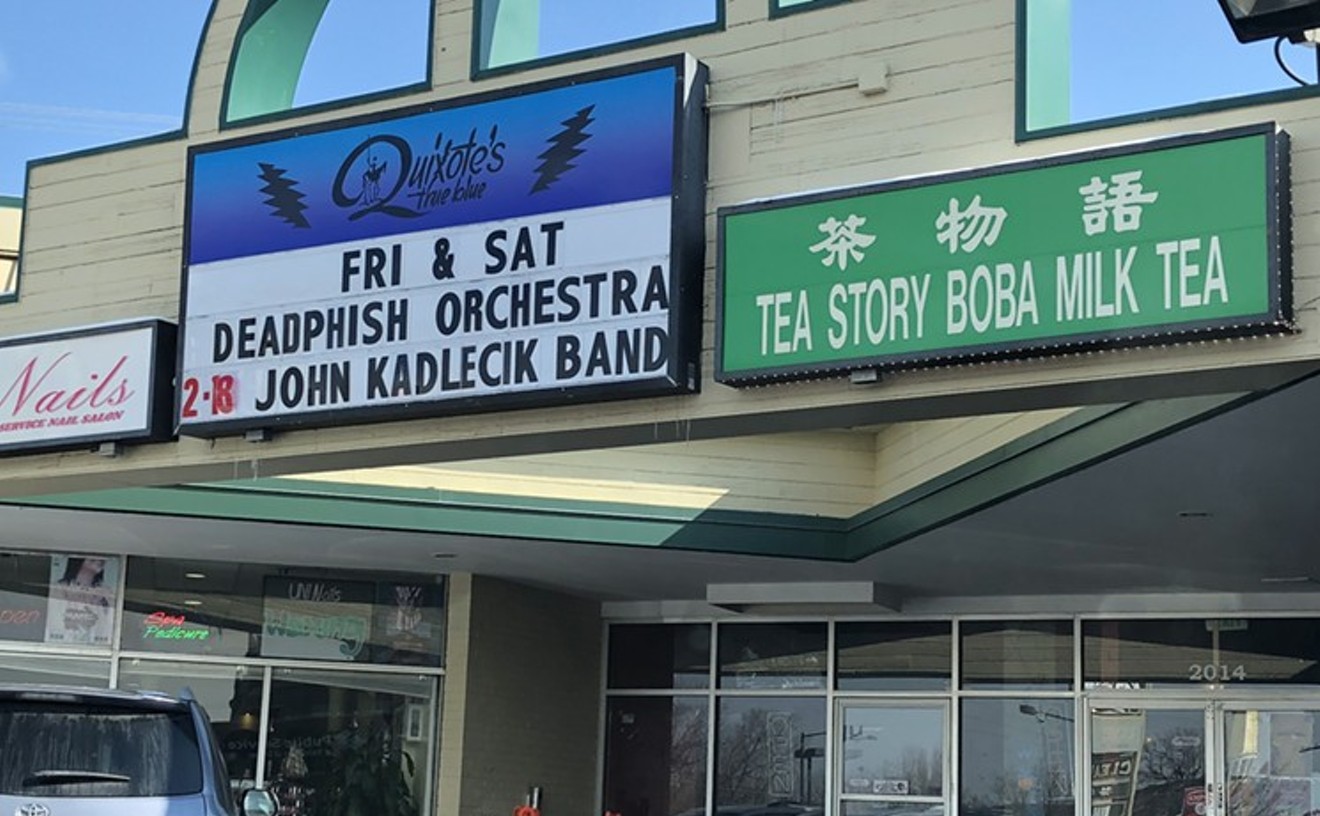 Come spring and summer, the back patio of Quixote's True Blue fills with the odors of hippie food on the stove, a few cigs and stogies, and often the sweet, skunky smell of other burning materials — not that anyone is condoning anything here. Snag a seat at the picnic table, where you can enjoy a post-Rockies beer or boogie your butt off in front of the outdoor stage featuring a Grateful Dead bluegrass cover band. Either way, we guarantee you'll get high...on life.