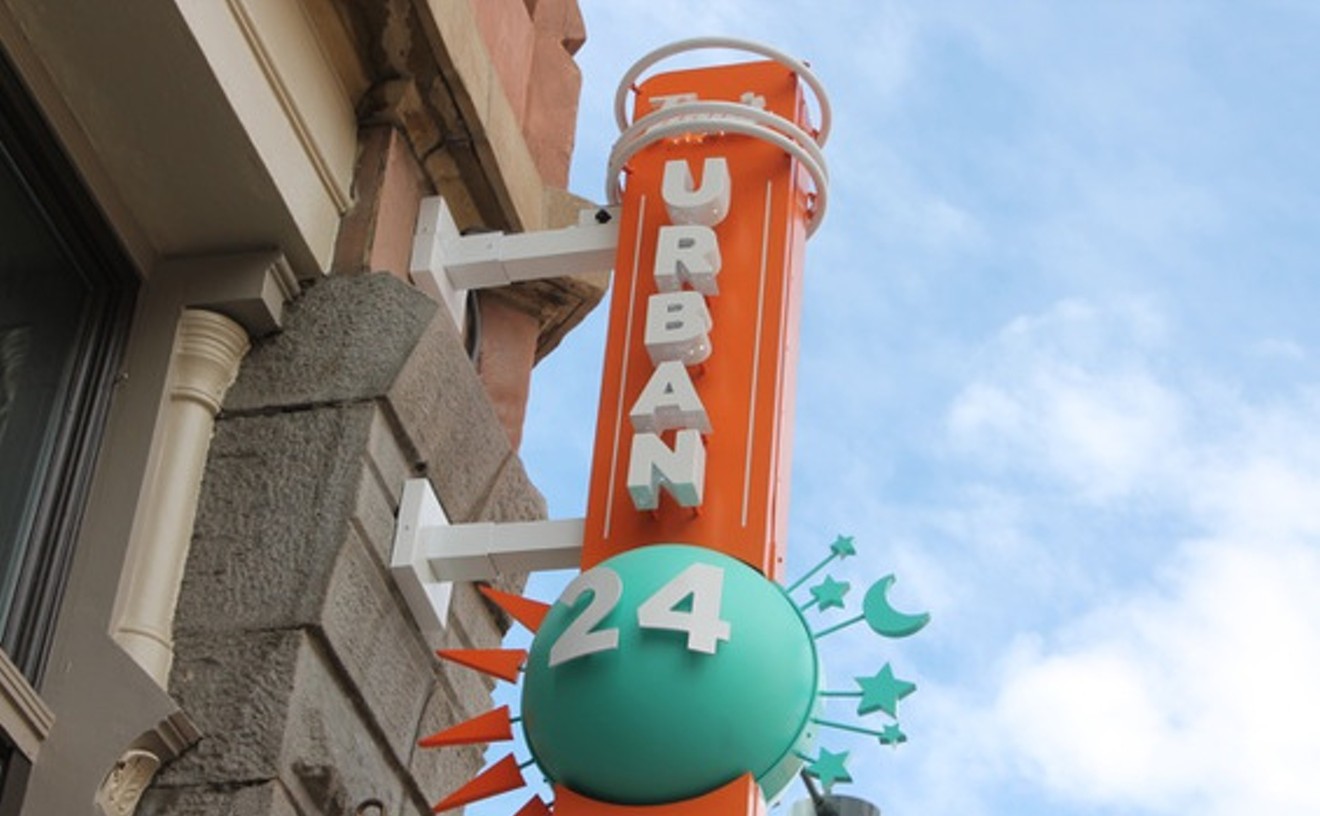 There are numerous reasons to be out and about in Denver, even at 3 a.m., and Tom's Urban 24 will make sure that you never go to bed with a growling belly — although if you're two sheets to the wind, you might have a few problems maneuvering your way through the menu, which is as long as the work day is short. A new addition to Denver's very small round-the-clock lineup, Tom's is a massive, hip joint on the edge of Larimer Square. Spry young servers deliver food that's anything but diner-standard, with options including deviled eggs, truffled lobster and shrimp pot pie, thin-crusted pizzas topped with figs, and even pho. There are plenty of other insomnia-assisters, too: burgers, Mexican staples, eggs done every which way, salads and sandwiches, all of which promise to fortify you for that late-night prowl. There's also a full bar pouring beers, craft cocktails and wine until 2 a.m. and starting again five hours later — which gives all-nighters an excuse to return bright and early for a daily dose of hangover-helping liquid courage.

William Havu brought together three of the state's top abstract artists last spring. The main event was Amy Metier. Metier begins with an actual subject, and then, using her expressive brushwork, turns it into an abstract composition; though more representational than usual for her, these paintings were still very much a part of her classic style. Meanwhile, the floors at Havu were filled with small, simple sculptures based on organic shapes by Michael Clapper. One of Clapper's greatest strengths is the way he combines different materials. Finishing off the trio were Emilio Lobato's recent wall relief sculptures made of found materials.

When beloved local songwriter Mike Marchant was diagnosed with lymphoma last year, the scene immediately rose up to support him. A part of Denver music for the past decade and a half, Marchant is known not only for his never-ending creative endeavors — in Widowers, Houses, Mike Marchant's Outer Space Party Unit and more — but also for his kind heart. Like many creative types, Marchant is uninsured, but the amount of support coming in from the numerous benefit concerts, comedy nights and variety shows that sprung up within weeks of his diagnosis has been nothing short of miraculous. It pays to be kind, and this selfless musician would surely do the same if he were in someone else's shoes.

The story behind The Elaborate Entrance of Chad Deity is told as a series of monologues by a Puerto Rican kid called Macedonio Guerra, or Mace. Mace was fascinated by professional wrestling as a kid and grew up to be a part of that world. But only as a literal fall guy — the opponent routinely demolished by such stars as Chad Deity, a man who knows how to put on a terrific show but can't really fight worth a lick. It takes a lot of charm to keep audiences engaged through these long, often expository monologues, and serious acting chops to bring across Mace's emotional life and the way he longs less for his own turn in the spotlight than for some kind of truth in the over-hyped, stereotype-ridden sport he loves. Lopez managed all of this in the Curious Theatre production and pulled off some cool wrestling moves in the process.

James O'Hagan Murphy provided a complex portrait of a complex man in RFK. Robert Kennedy is remembered for his tragic assassination and venerated as the ideal president-who-should-have-been. But he possessed less pleasant characteristics, too: utter ruthlessness in pursuit of power; spurts of pettiness and jealousy; a profound loathing (entirely reciprocated) for Lyndon Baines Johnson. Kennedy tapped Martin Luther King's phone, and it took him some time to become an advocate for civil rights. But once he did, he fought for them passionately. In Murphy's authoritative performance in this Vintage Theatre production, all of the man's depths and ambiguities were made clear. And Kennedy's grief as he stood over the coffin of his murdered brother seared the soul.

Erick Devine exuded kindness and humanity as Kris Kringle in the Arvada Center's Miracle on 34th Street. He has a big, rich baritone, and his portrayal brought so much warmth to the show that when he told little Susan he really was Santa Claus, you didn't doubt it for a moment.

Best Actor in a Shakespeare Production

When Lady Anne confronted Richard over the coffin of her father-in-law in Richard III and railed that his presence was making the corpse bleed anew, Nigel Gore, playing Richard, stuck in a finger to check. When she spat in his face, he tasted her spittle. This Richard wasn't kingly. He was almost clownish, and vulgar in the most undignified and unexpected ways — and yet he was frightening: You knew he was capable of unimaginable evil. Gore's original interpretation made the Colorado Shakespeare Festival production of Richard III new.

In Buntport's Tommy Lee Jones Goes to Opera Alone, waitress Jane, played by Hannah Duggan, was the only actual, freestanding human being. Everyone else was busy animating the large Tommy Lee Jones puppet or, in the case of Eric Edborg, providing his voice. So Jane served him pie and responded with down-to-earth humor and some skepticism to the bits of wisdom and information he doled out. Flirty, wise and brash, she was completely unintimidated by her famous customer. And also by opera, singing along with an aria and coming up with ideas to complete the plot of Puccini's unfinished masterpiece Turandot,with the help of a bottle of ketchup, a syrup dispenser and a fork. Duggan's intense focus on everything she did on stage, along with her protectiveness toward Jones, made her portrayal both touching and hilarious.

In the Boulder Ensemble Theatre's Ghost-Writer, Laura Norman played Myra Babbage, the secretary of a major writer, who continued work on his unfinished novel after his death because she believed she could still hear his voice dictating the words to her. Playing a woman who lived to serve others and kept a tight rein on her own feelings, Norman made an art out of stillness and silence; only her eyes revealed the deep currents of emotion within. Even the movement of her fingers on the clacking, old-fashioned typewriter keys was eloquent. When the writer, making a point about the work, placed a light hand on her arm, Babbage neither moved nor spoke — but the electric current that pulsed through her body was felt through the entire auditorium.

Doris in Miracle on 34th Street is a young single mother, a spunky, supposedly cynical professional who nonetheless has an easily breached heart — in other words, she's a pretty generic musical-comedy heroine. The script is on the nondescript side, and the songs are so-so. Nonetheless, in large part due to Lauren Shealy's fine soprano and strong performance in this Arvada Center production, the musical was one of the tastiest Christmas treats around.