Adelitas Cocina y Cantina, a comfortable neighborhood spot that opened in May 2013 on South Broadway, blew us away last year with its house margarita, and the best got even better this year, when owner Brian Rossi switched out his house tequila. He's now using Cimarron Tequila, a highland-agave tequila that lets the bartender control the sweetness of the drink. In fact, the sweetest thing about this superlative house marg, made with fresh lime juice and a lot of care by friendly bartenders, may well be its price: $5, or $4 during the two daily happy hours, from 3 to 6 p.m. and again from 10 p.m. to close. But the best deal of all is on Margarita Mondays, when these babies are two for one. 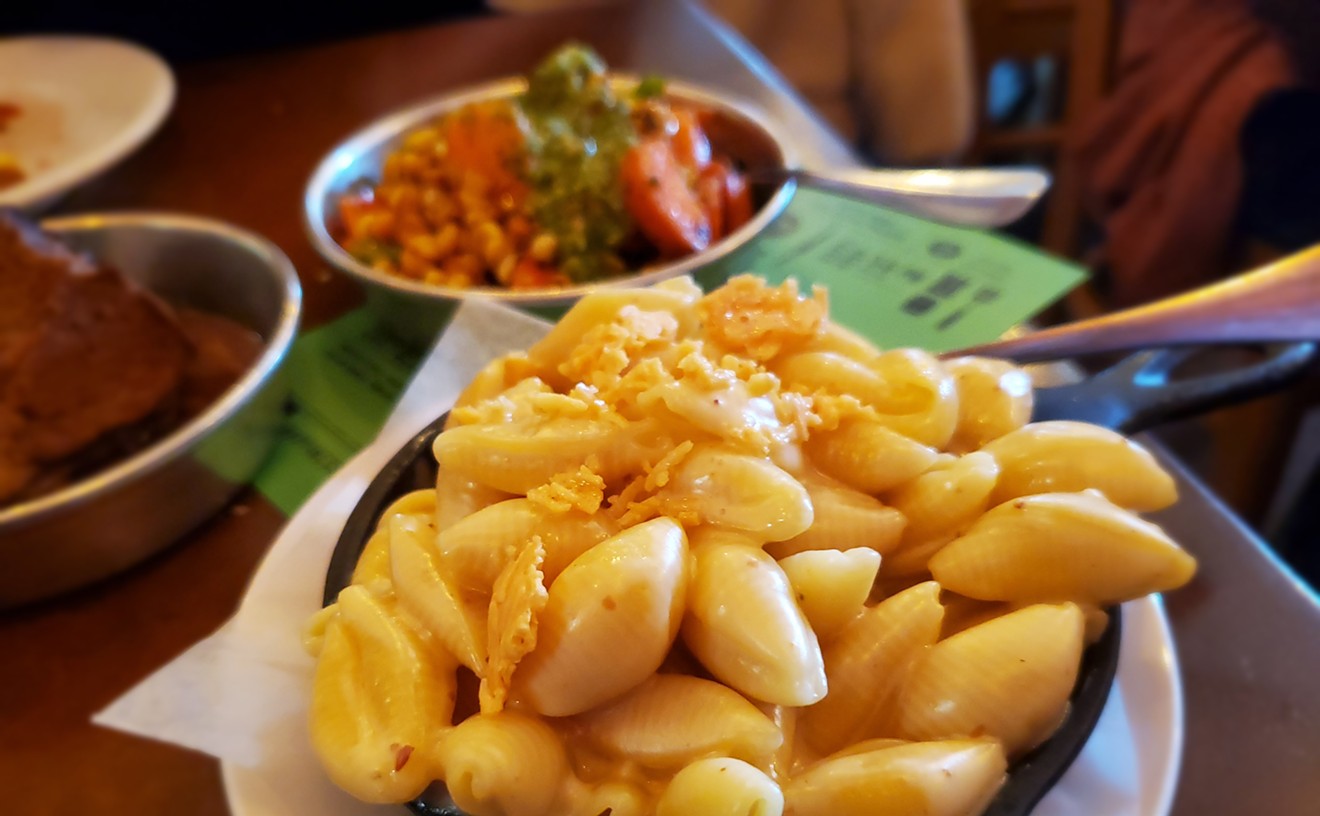 Yes, you know that Work & Class is incredibly hip, with very long lines. Take advantage of the $5 wait drink and you might care a little less about waiting — especially when you know that the town's best vegetarian green chile awaits. All of the traditional ingredients — minus the pork — are featured in this mix, and the masterminds at Work & Class also offer the mouthwatering sauce poured on top of a pile of French fries, then topped with cheese. Say it with us now: green-chile cheese fries. Need we say more? 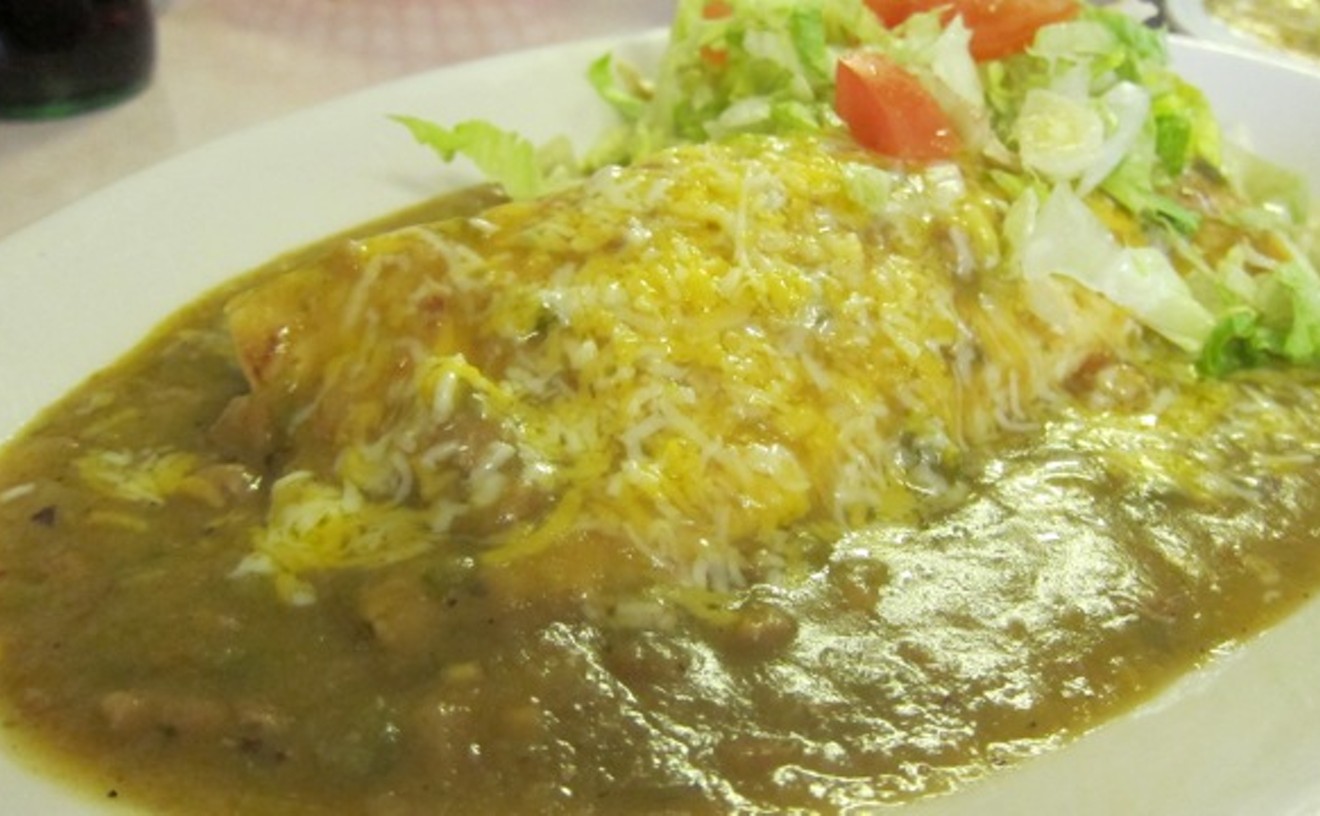 La Fuente is a little hard to spot during the day, but the neon cacti over the door lead the way at night. For many, breakfast burritos are the main attraction, but bags of corn-husk-wrapped tamales under a heat lamp are a giveaway that the kitchen can do more than just roll flour tortillas. Available with either pork and red chile or chicken and chile verde, La Fuente's tamales strike a perfect balance between dense and fluffy, achieving toothsome results with just the right burn from the tender meat fillings. Enjoy them à la carte in the tiny dining room, smothered with some fiery house green chile, or by the dozen to go for a celebration at home (or a late-night snack by refrigerator light). 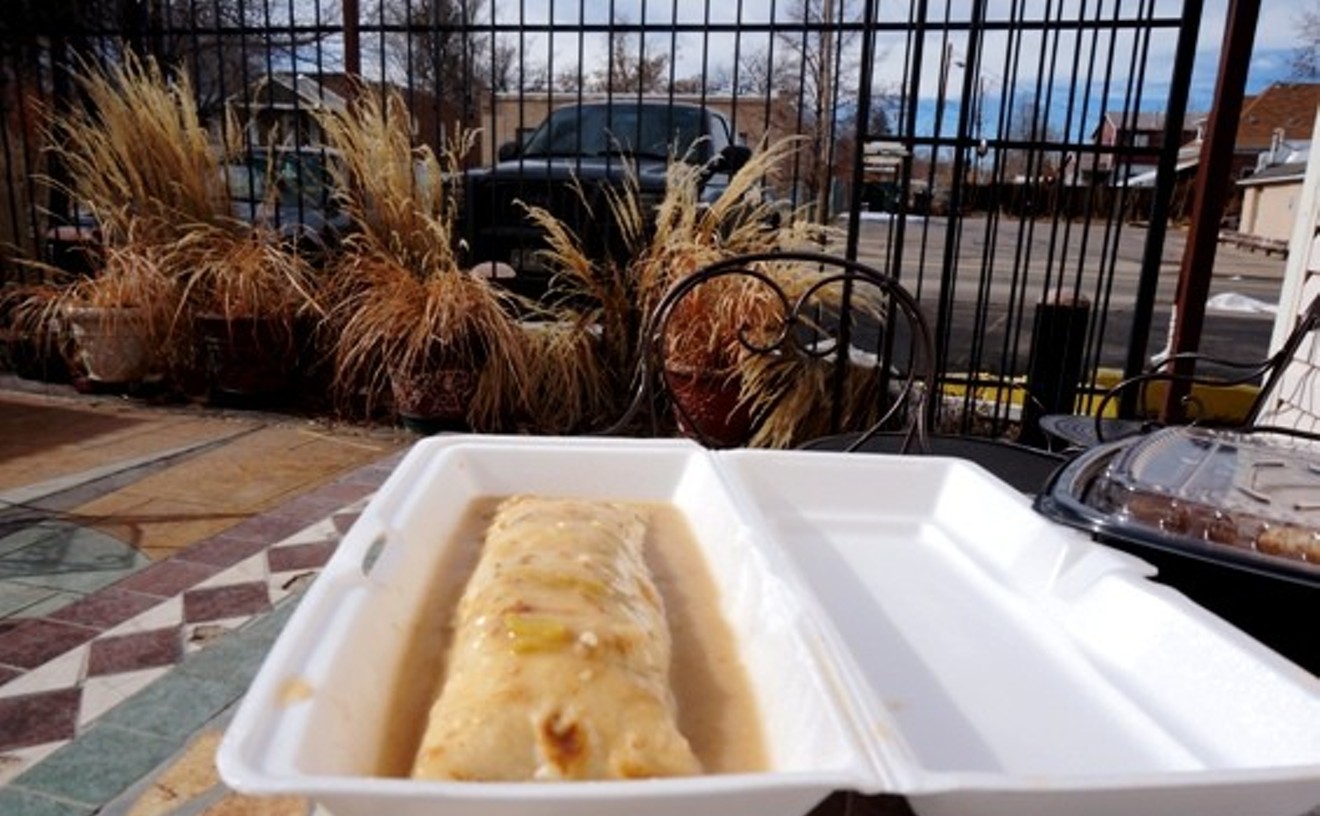 Walk up to the window at Chickee's, in the heart of Sunnyside, and ring the bell or holler hello if you don't see owner Harriet Sanchez; she's probably in the back, cooking up something good. Her takeout-only hut specializing in Mexican and Cajun fare and tacked to the side of a barbershop is the unlikely home of Denver's best smothered breakfast burrito. While late-night indulging or morning hangovers might require something grilled and greasy, Chickee's burritos stand out for their freshness and quality of ingredients. Eggs are scrambled to order instead of being made in big batches to sit inside foil-wrapped burritos built long before you walk in the door. And the chorizo is made from scratch by Sanchez's husband, so it's meaty, not oily, and filled with the essence of cumin and red chiles. Smothering it all is a generous ladleful of homemade green chile done Denver-style — thick and smooth, but with the pure and clean heat of chiles grown in Colorado. For a special treat, hit Chickee's on a weekend morning for the only Cajun-Mexican mash-up on the menu: breakfast burritos stuffed with Louisiana-style boudin, also made from scratch. 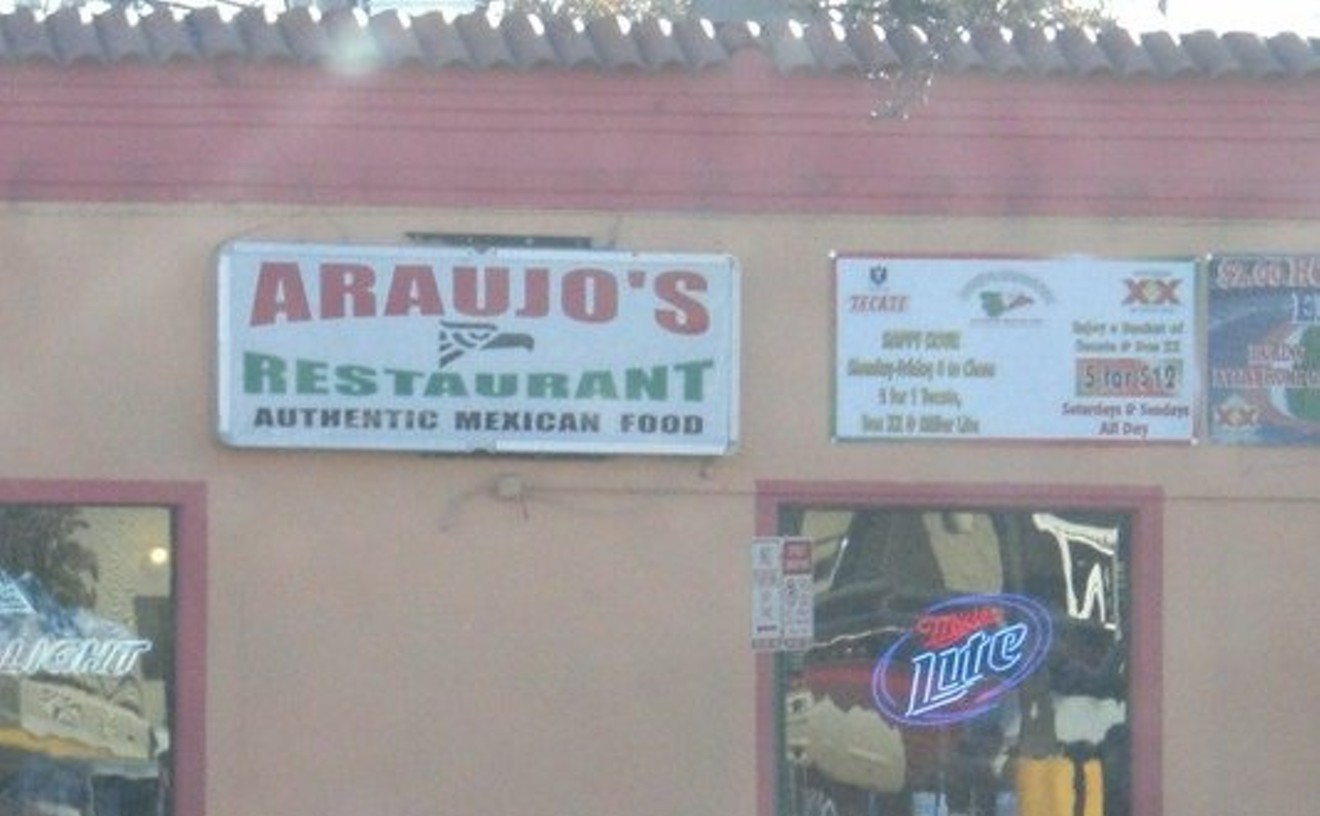 There's plenty of breakfast-burrito competition in what we've come to regard as the Burrito Triangle of Denver: In the 2500 block of Federal Boulevard, an expanded Santiago's faces off against Jack-n-Grill; both open early and do a big business in breakfast burritos. But right around the corner, Araujo's blows them both away with a $1.50 breakfast burrito, which you can order with mild, hot or half-and-half chile. Your delicious choices don't end there: You can get bean and cheese, bean and potato, or a daily special: meat (bacon on Monday, chorizo on Tuesday, ham on Wednesday, sausage on Thursday and steak on Friday) with eggs, spuds and cheese. No matter which version you go for, Araujo's breakfast burrito is a hefty handful, neatly wrapped in a tight aluminum-foil wrapper so you can eat it on the go with a minimum of spillage. Although Araujo's lacks the convenience of the Santiago's drive-through, it beats that homegrown chain in both price and portion. Rise and shine! 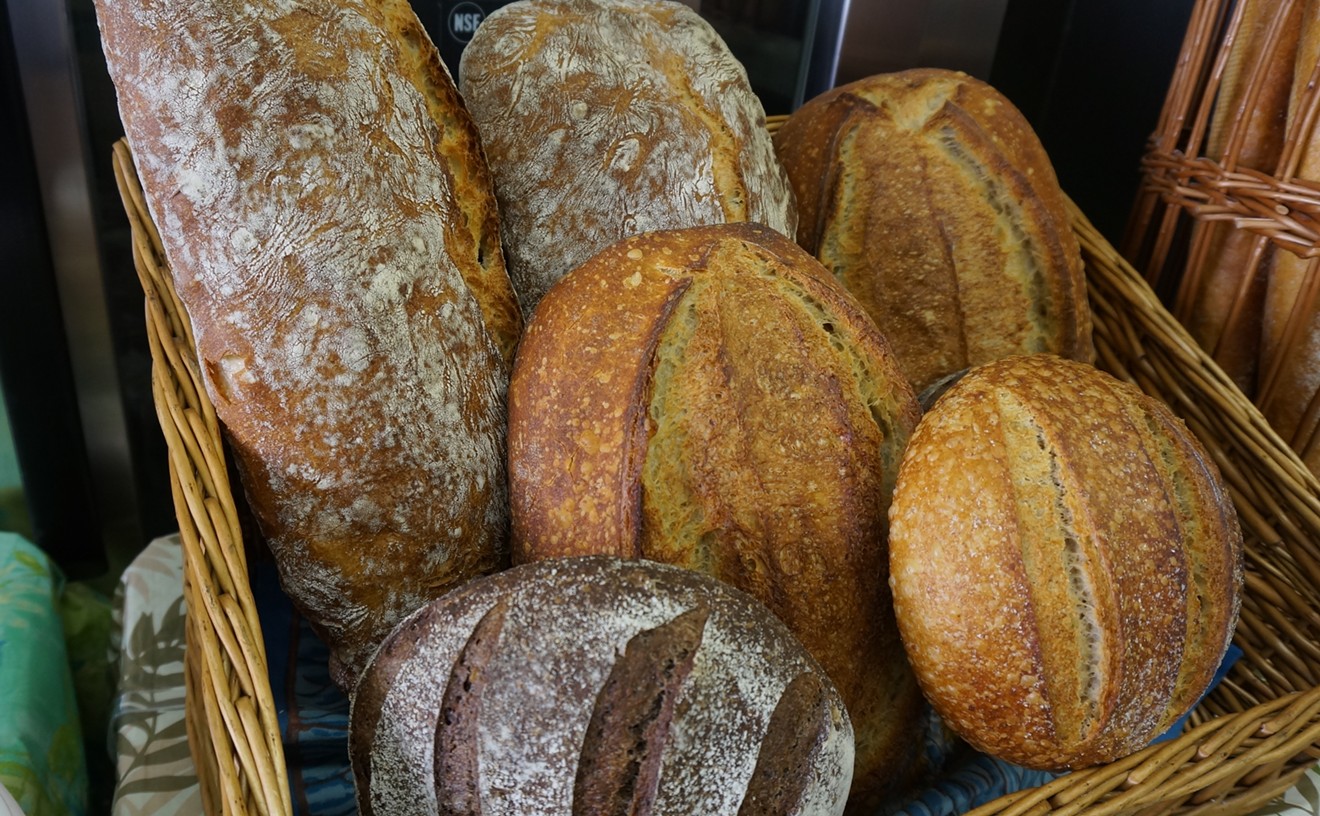 If you've found yourself swept off your feet recently by an extra-crisp baguette or focaccia with just the right amount of oil and rosemary, there's a good chance it was made by Grateful Bread. This family-owned bakery in Golden supplies artisan loaves to a list of metro-area eateries that reads like a who's-who of the restaurant industry, including a disproportionate number of Best of Denver winners. The bakery's operation is primarily wholesale, but it opens its doors to the public several times a year, so you can buy sticky buns and jalapeño-cheddar pretzels to eat now, and levain and ciabatta to pop in the freezer for later. Don't miss the chewy quinoa, which toasts to perfection for a protein-packed start to the day. Check the bakery's website for specifics on upcoming retail days and a list of Denver markets selling a limited selection of baguettes and ciabatta.

Azucar Bakery doesn't just build beautiful decorative cakes for special events, it's also possibly the only Peruvian cafe in town, featuring lovely, flaky orejitas ("little ears"), sweet alfajores (shortbread rounds glued together with dulce de leche) and sponge-cake rolls called pionono filled with mocha crème or dulce de leche. Grab a cafe table at the pink-fronted store for a quick coffee and sweet treat or take home a box of your favorites. But great baked goods aren't the only reason Azucar is the best; owner Marjorie Silva's exceptional customer service has also garnered attention. Silva made national news by sticking to her principles while attempting to satisfy a difficult (to say the least) customer. For maintaining her cool while offering a solution to an obvious troublemaker looking for an easy target, Silva has earned the respect of civil-rights advocates, Denver's gay community and sugar lovers everywhere. 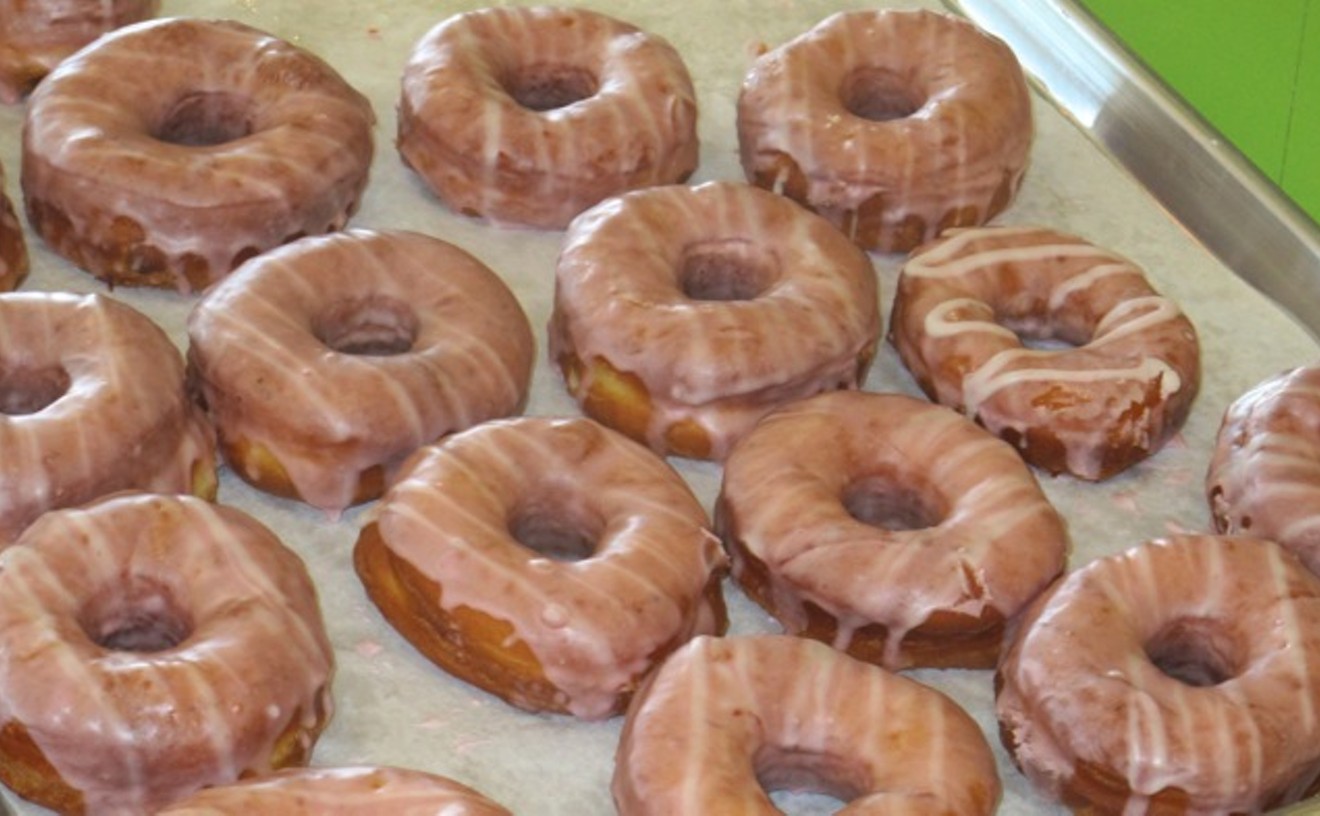 We started following doughnut-makers Josh Schwab and Ben Hafdahl long before they opened this hip storefront on Leetsdale last year, with green counters and music so loud that the place could be mistaken for a bar. While we were intrigued from the start by the novel combinations and high-quality ingredients of the doughnuts they sold around town, consistency remained an issue — but they've fixed that in their new place. Now we can't imagine a better way to start the day than with a box of doughnuts from Glazed & Confuzed. Most are of the raised variety, and they're good enough to convert even the most ardent cake-doughnut fans. Don't miss the Grilly D, which is frosted, grilled, then frosted again for a toasted-marshmallow-like finish; the Samoa, a tribute to the Girl Scout cookie, with caramel, toasted coconut and a chocolate drizzle; and the deceptively simple plain glazed, with a decadent vanilla-infused brown-butter glaze. This much deliciousness can be pricey, but it's worth the splurge.

With pie this good, you'd think it was Thanksgiving. Lucky for us, pastry chef John Hinman bakes holiday-worthy temptations all year long — and he does so not at a bakery, but at a brewpub. The selection changes daily, but with options ranging from Key lime to chocolate cream, you're sure to find something tempting, even after all that fried chicken and beer. Pecan pie is studded with nuts so that the filling is more than the sweetened brown goop that's often passed off as the real thing. And cherry is in a class by itself, with two kinds of cherries and a crust loaded with European-style butter. In addition to these pies, some of which are sold in six-inch minis and others by the slice, Hinman also bakes knockout whoopie pies in several flavors.

If you're gluten-free, the question at the ever-popular Work & Class isn't "What can I eat?" but "What can't I eat?" All but a handful of dishes are made without gluten, so you can snack your way around the menu footloose and fancy free, enjoying the best this talented kitchen has to offer. With every bowl of guajillo-laced lamb posole, every handmade tortilla piled with citrusy cochinita pibil, every skillet of hot bread pudding soaked with so much chocolate it could pass for a molten chocolate cake, you'll see why chef-owner Dana Rodriguez earned a James Beard nomination for Best Chef Southwest.