In a rebuke of United States Attorney General Jeff Sessions's rescission of the Cole Memorandum, the Koch brothers released a sharply worded statement supporting states' rights with regard to legal marijuana. The statement, first released in late January, argues that "citizens have spoken on marijuana" and that the United State Justice Department can "choose to be on the side of individual liberty and states rights" by not interfering. 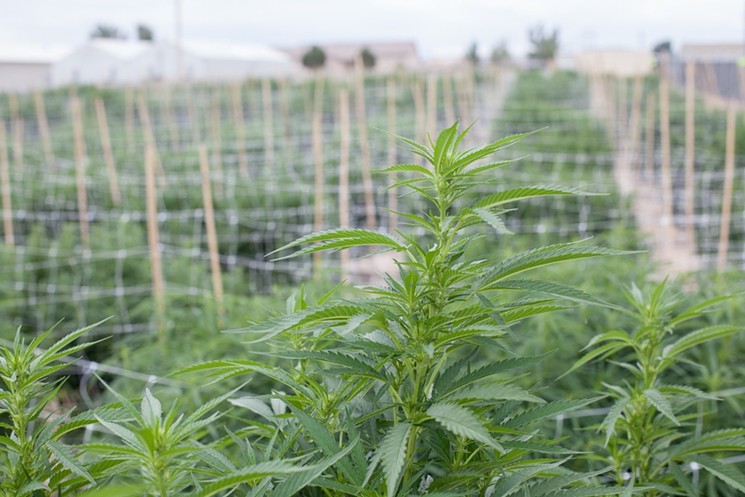 The Koch brothers want marijuana farms to be respected by the federal government.
Jacqueline Collins
The influential Koch brothers are among the wealthiest donors to Republican causes, and they've pledged to donate up to $400 million in the 2018 midterm election cycle, so their opinions carry weight in Republican circles. Colorado Congressman Mike Coffman in particular has been a traditional favorite of the Kochs, and the brothers poured $200,000 into Colorado school-choice debates last summer. The Kochs' public disagreement with the Trump administration over marijuana could offer Republican electives more leeway to support legal marijuana at the state level without risking major GOP donor support.

The Kochs have plenty of motivation when it comes to Sessions, who's been a thorn in the side of the legal marijuana industry since taking his position in 2017. In January, he rescinded the 2013 Obama-era Cole memo, which offered protections from federal prosecution for the distribution, growth and possession of pot in states where marijuana is legal.

Of note, the Koch statement goes beyond just defending states' rights in reference to their dispute with Sessions over legal marijuana. The statement also labels the war on drugs "misguided" and advocates a "new, smarter approach to drug policy."

"The administration would be better suited working with members of Congress to reform outdated sentencing laws," the statement reads. "However well-intentioned these laws were upon implementation, they have ruined lives, torn apart families and communities, and have burdened taxpayers, doing little to keep people safe."

This also falls in line with Colorado Republican Senator Cory Gardner's tongue lashing of Sessions immediately after the memo was rescinded, and it represents a potentially large split between the Trump administration's view of legal marijuana and other Republicans' traditional support for states' rights and, perhaps, legal marijuana overall. Gardner began holding up DOJ nominations in retaliation of the Cole memo revocation, but he ended most of those holds last week as an "act of good faith" after talks with DOJ leadership, according to a statement from his office.

An e-mail asking the Koch brothers for further comment was not returned.