Samples
CraftBeer.com, a website run by the Boulder-based Brewers Association, has named the fifty best beer bars in America, based on a survey of its readers. The list of Great American Beer Bars included one in every state, including Samples, a three-year-old watering hole in Longmont. With 28 taps and more than forty bottles and cans, Samples "is the place (and challenge) for you," CraftBeer.com says. "Test your palate with Samples's Beerquator Challenge — identify all twenty beers in a flight and earn yourself five hundred smack-a-roos! Think it’s easy? Samples is still waiting for their first winner."

CraftBeer.com readers were asked to nominate their favorite craft-beer bar in their state and fill out a survey about what makes it so great, including atmosphere, staff, beer selection and special events. More than 7,700 people cast votes between November 2017 and January 2018. 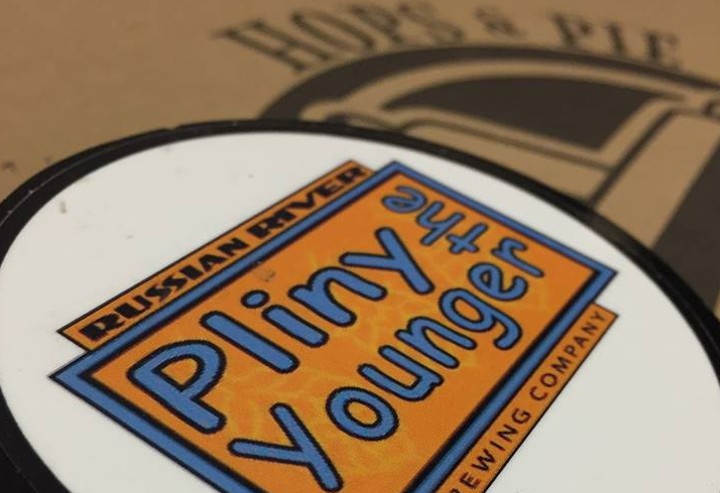 Hops & Pie
Thursday, March 1
Hops & Pie will tap its allotment of Russian River Brewing's famed triple IPA, Pliny the Younger, at 1:30 p.m. However, the craft-beer bar and pizza joint will be handing out tickets starting at 11:30 a.m. If you have a ticket, you are guaranteed a pour after 1:30 p.m., today only. If you don't make it in by 10 p.m. or if you lose your ticket, you're out of luck and forfeit your pour to the Hops & Pie staff.

March is Oyster Month at Jax Fish House & Oyster Bar's various locations in Denver and the Front Range. To kick off this annual celebration, each Jax location will tap kegs of Emersum Oyster Stout, which is brewed by the Post Brewing Company in Lafayette (the Big Red F Group owns both companies). "Members of staff from all Colorado Jax restaurants joined forces with the brewers to help make this oyster stout. They added shucked Emersum oysters to the mash and then whole oysters — shell and all — to the boil," Jax says. "This process adds more minerality, more mouthfeel, and a subtle brightness to the beer."

Oskar Blues is bringing fresh specialty releases, brewed at the brewery's original location in Lyons, to its Tasty Weasel taproom in Longmont and to the Boulder taproom. The beers, which are part of the Barn Burner series, will be tapped on the first Thursday of every month. Today's are Interstate Smash Express — Galaxy;
Bwahahaha — Mi Chinook; All coloRADo IPA; and Barn to Barrel DH Farmhouse.

Cerebral Brewing
Friday, March 2
Banded Oak Brewing taps its seasonal 4.8 percent ABV Vienna Lager. The beer is one of Banded Oak's original four beers from when the brewery opened. It celebrates the fact that warm weather is just around the corner.

Alpine Dog Brewing taps a cask of Mango IPA at 6 p.m. The beer is the brewery's Thunder Puppy IPA that has been infused with one pound per gallon of mango purée.

Cerebral Brewing hosts the bottle release of Forever Awake starting at noon. Coming in at 10.5 percent ABV, Forever Awake is an imperial coffee stout brewed with oats and lactose and then conditioned on a blend of Ethiopian beans from MiddleState Coffee. It costs $14 per bottle, with a limit of three per person. 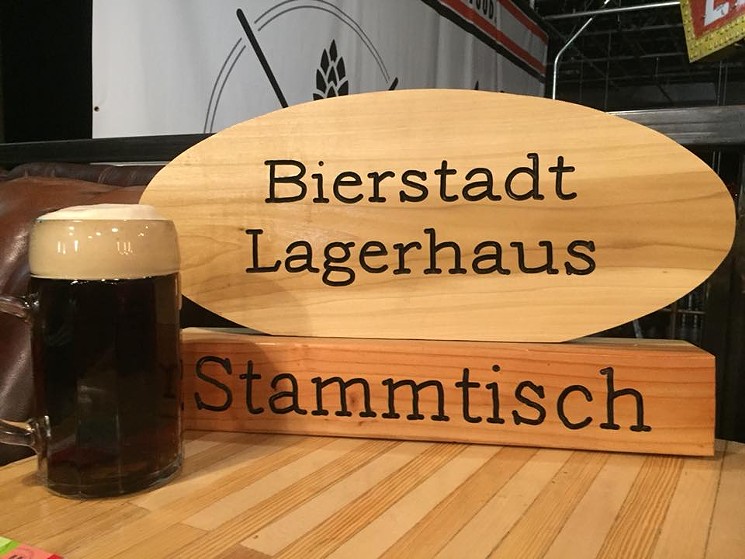 Bierstadt Lagerhaus
Saturday, March 3
At noon, Great Divide Brewing releases the eleventh batch in its Local Knowledge series, Golden Galactic Goddess SMaSH. The beer was brewed with Golden Promise malt to add "a depth of malty flavor that is bright and bready," the brewery says. "However, the Galaxy hops are the real star of the show, providing for a tropical blast of passion fruit and guava with a hint of raspberries." Local Knowledge is Great Divide's limited, single-batch pilot series; the beers are available only in six-packs and on draft from the brewery's two taprooms.

Fiction Beer Company releases its second milkshake IPA at 1 p.m. Nothing Rhymes with Orange Papaya Orange Milkshake IPA was brewed with papaya, Mandarin orange, vanilla and lactose, along with Mandarina Bavaria, Ekuanot and El Dorado hops. A limited number of Crowlers will be wold for $14 each.

"Starkbierzeit is known as Oktoberfest's little brother but with stronger beers," says Bierstadt Lagerhaus, which will tap its higher ABV Eisbock for a starkbier party. There will be bands: Steve Rock on the accordion will sing polka tunes from 2 to 5 p.m., and at 6 p.m., Gora Gora Orkestar will go on. There will also be German foods.

Parry's Pizza will tap Pliny the Younger at its Highlands Ranch location at 11 a.m. The pizza joint opens at 10 a.m., though, and the first sixty people in line will get a ticket for a pour. Any remaining beer will be raffled off. In addition to PTY, Parry’s will tap Russian River's Pliny the Elder, Sanctification and 2015 Consecration, along with Barrel Aged Darkness by Surly Brewing and Easy Evil by Anchorage Brewing. Parry's will also serve breakfast pizza topped with scrambled eggs, green peppers, onions, bacon and cheddar.

Now in its fourth year, Boulder's Winter Craft Beer Festival returns to the 29th Street Mall in Boulder (in the covered and heated portion of the underground parking structure) from 1 to 5 p.m., with beers from more than fifty breweries and cider makers, most of them local. And this time around, the festival's organizers made a point of only inviting independently owned breweries. Tickets are $45 at the fest's website, and some proceeds will go to support the nonprofit Community Cycles. “The world of craft has become murky and confusing. So we will only be inviting independent brewers to this year’s fest," says co-founder Ross Bowdey. "We don’t care how big the brewery is or where they come from, but we want to help the independent brewers continue to grow." 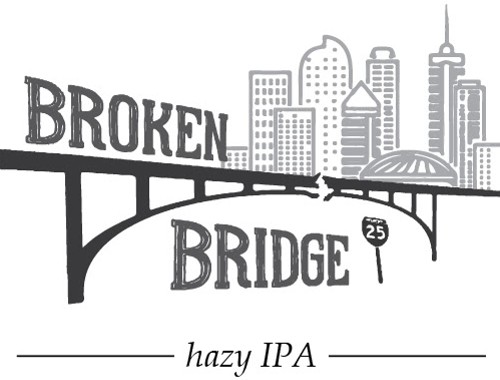 Avoid the bridge to get to this beer.
Briar Common
Tuesday, March 6
"If you've ever crossed I-25 to get to our brewery, you know the bridge. If you've ever crossed it on foot or by bike, you REALLY know the bridge we're talking about," says Briar Common Brewery + Eatery, which will tap Broken Bridge Hazy IPA today. Brewed with blood orange, the beer is a hoppy citrus bomb that "pairs well with conversations regarding the horrible bridge a few blocks away," the brewery adds. "Fortunately, a new bridge is part of Denver's plan to revive the Central Platte Valley, which includes Elitch Gardens, the Pepsi Center, the Aquarium and the Children's Museum. However, there's no guarantee this will happen...in our lifetime. We deserve a better, safer bridge."

Wednesday, March 7
It's IPA month at Copper Kettle Brewing, which will tap a new firkin of a special IPA each Wednesday at 2 p.m. The first is Pomegranate Rye IPA, which "tickles the palate with subtle rye spice and muted bitterness," the brewery says. "Complemented by pleasantly sweet notes of pomegranate and a relatively low IBU of 60, this beer aims to please both Hop Heads and casual beer drinkers alike.

To help raise money for an upcoming exhibit on beer at the Colorado History Museum, Left Hand Brewing will host a series of three dinner talks by its own historian and brewer, Carl Rose. The first Colorado History Night is today from 6:30 to 8:30 p.m. at the brewery in Longmont and includes an hour-long talk, a Colorado-inspired plated dinner, and a flight of Left Hand beer — all for $25. The other two dinner talks take place on March 21 and March 28. Rose will cover the complete history of Colorado's brewers, beginning with the pioneer brewers of the 1860s through the growth of the industry in the late nineteenth and early twentieth centuries.

Thursday, March 8
Zuni Street Brewing kicks off three days of parties to celebrate its first anniversary. Today you'll find live music from the Ken Burdette Band Duo from 6:30 to 9:30 p.m., the Wheels on Fire Food Truck and anniversary T-shirts and sunglasses. Friday, there will be more live music and a food truck. And on Saturday, Zuni Street will release two beers: Bourbon Barrel Aged Midnight, a whiskey ginger beer with a Belgian Twist; and Sour Brown Ale Aged with Strawberries. There will also be music, ice cream, food trucks, a bouncy castle and more.

Friday, March 9
Westfax Brewing in Lakewood will celebrate its two-year anniversary with events starting at 2 p.m. and lasting through Saturday. The first is the release of Concussion Protocol, a Belgian-style quadrupel. It is also the two year anniversary of the Sha-WING Food Truck, which will be on hand and hosting a wings-eating contest at 7 p.m. It's $10 to enter, and there can be a max of ten participants; winner gets gift cards and free beer.

Leadville's Periodic Brewing will open its new Northglenn taproom, 2100 East 112th Avenue, at 11:30 a.m. and host grand opening events through Saturday. The first 42 patrons get a free glass with their beer.

Call to Arms Brewing
Saturday, March 10
Call to Arms Brewing has cooked up a beer with Novel Strand Brewing, which plans to open this year in the Baker neighborhood, called Galactic Funk Punch. It will be released in cans. "This divine nectar was entirely fermented in oak puncheons with a blend of two bacteria, one of our favorite saison strains, and one bad motha-shut-yo-mouth strain of Brettanomyces," the breweries say. "We then went to another dimension and infused it with a spaceship full of Galaxy, Nelson Sauvin and Mosaic hops. We hope every sip you drink down puts a dip in your hip on the way to funky town." The 6.3 percent ABV sour ale is "a mix of both traditional and modern souring and hopping techniques. Expect an initial wave of Brett funk joined by a heady mix of tropical fruit flavors birthed over several months of flirtation between hops and microbes." There are 100 four-packs of sixteen-ounce cans available, at $20 per four-pack.

Ratio Beerworks brings back its Cool Beans Coffee Festival — "a grand celebration of beer, coffee, and coffee beers" — from 10 a.m. to 1 p.m. The brewery has teamed up with its neighbors at Novo Coffee "to showcase the diversity of flavors that can emerge from differing coffee bean varieties, various levels of roasts, and how all of those flavors can be highlighted or enhanced when infused in an array of beer styles," Ratio says. For $30 at nightout.com, attendees get six four-ounce tasters of coffee-infused Ratio beers; one full pour of a coffee beer; a bloody beer from the Real Dill featuring Ratio's Domestica American Standard Ale; pour-overs and coffee demonstrations from Novo, Huckleberry Roasters and Method Roasters; doughnut holes from Glazed and Confuzed; bacon from Bacon Social House; and a limited-edition commemorative Ratio coffee camper mug.

Station 26 Brewing unveils Key Lime, a kettle-soured brew with lactose to give it smoothness, vanilla, and key lime flavors up front. The brewery will begins selling Crowlers of the beer for $12 at 1 p.m.

Leadville's Periodic Brewing continues its grand opening weekend at its new Northglenn location with a party lasting from noon to 10 p.m. There will be door prizes, food from Ginger Pig and Chibby Wibbitz, and live music at 6 p.m. from the Trash Pandas.

Wednesday, March 14
Join Copper Kettle Brewing from 2 to 9 p.m. as it celebrates Pi Day, "the only thing out of math class we all (well, most of us...) remember," the brewery says. They will tap four special pie-inspired beers that will be available in twelve-ounce pours or as a special flight. The beers are: Strawberry Rhubard Blond; Pecan Pie Dopplebock; Cherry Pie Cream Ale; and Banana Cream Hefe. "Anyone that can recite the mathematical constant to at least the twentieth digit gets their first twelve-ounce pour on us." There will also be pizza pies — from Dough Boys, out front.