March Has More TV Than Your Eyeholes Can Handle. Here’s the Only Guide You Need! 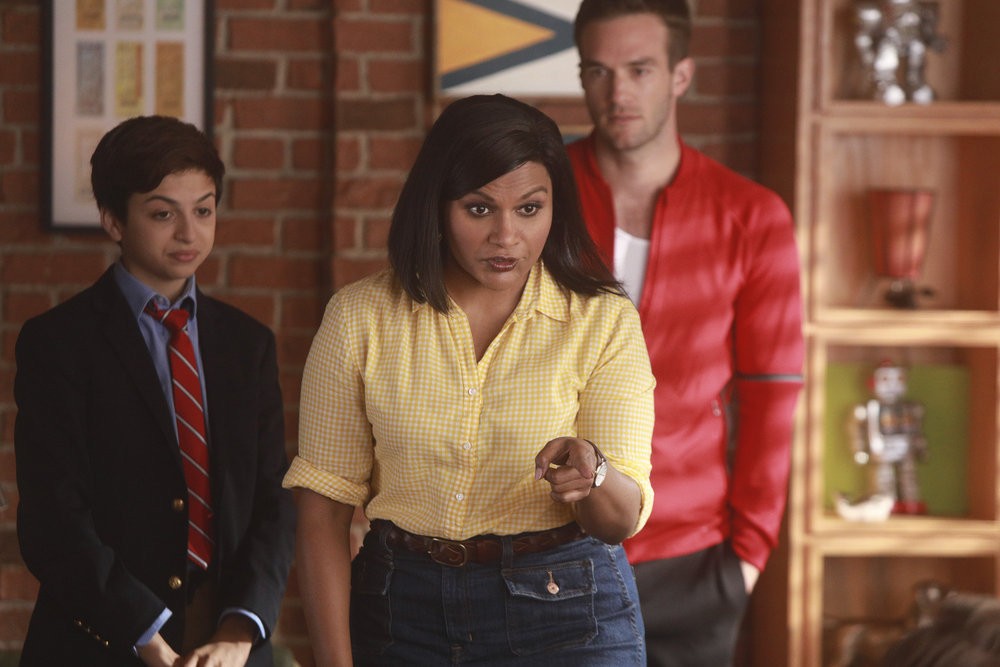 Jordin Althaus/Courtesy of NBC
Mindy Kaling (middle) appears with J.J. Totah (left) and Andy Favreau in Champions, NBC's new comedy series about a has-been athlete (Workaholics’ Anders Holm) who takes on the challenge of fatherhood.
HOLY SHIT, there is so much new (and returning!) TV in March. Like, so, so, so much. Peak TV is real and it’s killing/sustaining me. Let’s dive in because I’m giving myself carpal tunnel just thinking about how many words I have to type.

March 7, Heathers, Paramount Network
Well, fuck me gently with a chainsaw, Heathers is back! This series adaptation of the 1989 cult classic about a good-girl-turned-hardcore-b-turned-straight-up-murderer-turned-queen-b-with-a-heart-of-gold looks pretty clutch. Best part: Shannen Doherty will appear in three episodes in a new role! Interestingly, it’s an anthology series, so future seasons will be about other mean girls fucking shit up? IN!

Editor's Note: Turns out this one won't be premiering in March after all, as the network is delaying it until later in the year "in light of the recent tragic events in Florida and out of respect for the victims, their families and loved ones." That means they think there's a time in 2018 where we won't be reeling from a new mass shooting?

March 8, Champions, NBC
Mindy Kaling’s new joint is essentially My Two Dads starring Workaholics’ Anders Holm and Aquarius’ Andy Favreau. I’m sure it’ll be funny because Mindy Kaling is hilarious, but, of course, part of me wishes it was about people of color or women or even two dogs in a non-monogamous relationship or, really, anything but two white guys. But it’s not on Kaling to solve systemic racism and sexism with a funny TV show. Shit is complicated, and I’m just thankful she’s in the space creating quality content I can jerk off to. (Anders Holm is Awoooooga! Humina humina!)

Among the guests appearing with hosts Nicole Byer (second from left) and chef Jaques Torres in the Netflix amateur backing show Nailed It! are Jay Chandrasekhar (left) and Kyle Levonian (right).
Courtesy of Netflix
March 9, Nailed It!, Netflix
Nicole Byer, who is the best — I still want to slap the execs who canceled her super funny and delightful MTV sitcom, Loosely Exactly Nicole! — hosts an amateur baking show along with celebrity chef Jacques Torres (he is a chocolate master! Respect!) and it’ll surely be delicious and great. I’ve been waiting for the American answer to The Great British Bake Off and this could be it, right?! Hella funny and sweet and charming and not all mean and shitty like lots of cooking shows? If anyone can do it, it’s Nicole and Jacques — also, their celeb name is Ja’cole! I just made that up but I want to see it go viral by 1 p.m.! Chop chop!

Auli'i Cravalho (left), from the animated film Moana, and Damon J. Gillespie are among the performers in Rise, NBC's new dramedy from Parenthood/Friday Night Lights producer Jason Katims.
Peter Kramer/Courtesy of NBC
March 13, Rise, NBC
If both Friday Night Lights and Glee were ground up and then smashed into the Reconstituted TV Machine, this new TV dramedy from Parenthood/Friday Night Lights producer Jason Katims would ooze out. Yum! Cons: It stars Ted from How I Met Your Mother. Pros: It also stars QUEEN Rosie Perez and Moana’s Auli'i Cravalho! The pros definitely outweigh cons — Rosie alone counts as 15 Ted Mosbys — plus, who doesn’t love a good group of rug rats singing show tunes, despite all odds! (What odds? Drama kids will ALWAYS sing show tunes. Hell could freeze over and locusts could fill the air and drama kids would still be scream-singing along to the original Broadway recording of Rent and that’s because drama kids are dope as hell. They can do literally anything and they make me believe that the future might not be total crap and also because drama kids, of which I am one, spent too much time in drama to learn how to end a run-on sentence byeeee.)

March 18, Instinct, CBS
GET THIS: Alan Cumming is starring as a former CIA agent turned professor who is lured back into his old life to help the NYPD catch a serial killer. I mean — this is the same dude who was the emcee in Cabaret, right? Actually, you know what, I kinda love that. Fuck the pigeonholing of character actors; I’m tired of my male leads being all ripped abs and Blue Steele faces. I’m ready for someone with some flair and personality to take center stage — and if he should sing a show tune or two during it, who am I to object/not sing along?

March 27, Roseanne, ABC
This should be verrrry innnnteresting. Billed as the 10th season of the hit ABC show, it’ll pick up where the original left off; well, except it’s going to ignore the last episode, which killed a major character and pissed everyone off. Almost the whole gang is coming back, too — Roseanne Barr, John Goodman, Sara Gilbert, Laurie Metcalf and Sarah Chalke, though she’s not playing Becky? See? Very interesting! I have complicated feelings about this because Roseanne was the only show growing up that made me, a lower-middle class little fat lunatic, feel seen, but then also Roseanne is now an undeniably wack Trump supporter with all sorts of gross views. Plus, I was actually up for a part on the show when I stumbled into acting at age 8 but I didn’t get cast, so, honestly, fuck her for not believing in my true star potential, of which there is none.

March 28, Alex, Inc., ABC
OMG it’s a TV show about a white guy who started a podcast network. Great, great, great, great, great. Now every dude who doesn’t already have a podcast (total count as of posting: three) will get into it. So not only will you have to talk about this show with them, you’ll also then have to go on their podcast and console them when they only get five downloads per month. HOORAY!

I also have some honorable mentions for this list because I just can’t with how insane March is on the TV front: Personal Space is a new science fiction web series (you can watch it on Amazon TV) dedicated to the memory of Battlestar Galactica's Richard Hatch, who died in February 2017, shortly after his scenes were filmed. Could be interesting! There’s also a new WhoHaha show called Ghost BFF, which is a comedy that deals with mental illness and suicide, and well, a ghost best friend. Also, Flint Town premiered March 2 on Netflix and is a very worthwhile eight-episode documentary about the water crisis in Flint, Michigan, and the much-awaited Atlanta is back for its “Robbin’ Season” — that’s March 1 on FX. SO MUCH TV!!!!