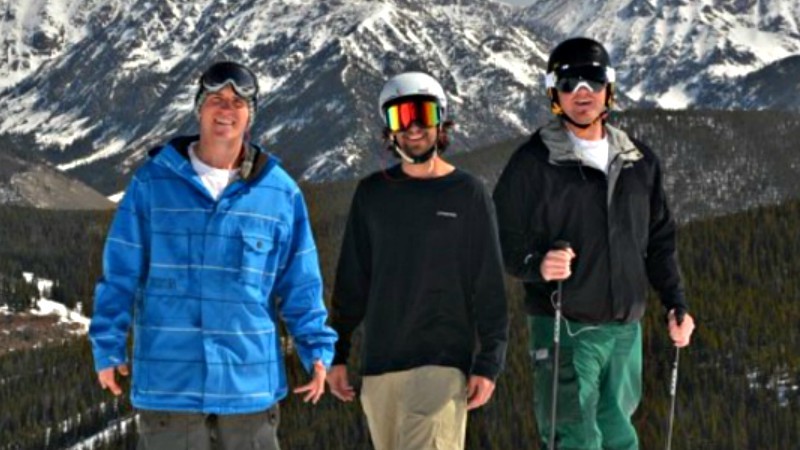 Twitter
Sam Failla, center, with two friends at Vail, where he worked as a ski instructor.
On February 6, as we've reported, 24-year-old Sam Failla was declared dead just outside Vail ski area, where he worked as an instructor. Today, the circumstances of Sam's tragic passing, and particularly the eleven hours or so that elapsed between an exhausted companion's first 911 call and the discovery of Failla's body in a stream only about a mile from the base of a major ski lift, remain mysterious. And while the inquiry remains open, John Failla, Sam's father, believes multiple opportunities to save his son's life were missed.

"The calamity of errors that went on in Vail is something for a Dateline," John says.

Eagle County Sheriff James van Beek, Vail 911 dispatch manager Marc Wentworth and Dan Smith of the Vail Mountain Rescue Group decline to comment about the case, citing the ongoing investigation. And at this writing, Jonathan Routh, a fellow Vail ski instructor who set out with his friend Sam on what would prove to be the latter's final trip down the mountain, has not responded to an interview request from Westword.

However, Routh's 911 call is accessible here, as well as an official chronology of events prior to his rescue. During the call, Routh said he'd hit the slopes alongside another person, but the dispatch operator, Bonnie Collard, failed to follow up on this comment, and Routh made no additional mention of it before the communication ended. As such, the search for Failla didn't get under way until the next morning, after another 911 call from Routh, many hours after it would have done any good.

A photo of Jonathan Routh, Sam Failla's roommate, and the person with whom he went snowboarding immediately prior to his death.
Courtesy of John Failla
Sam and Jonathan were originally from Chatham, New Jersey. "They went to high school together, and this is the second time they worked out in Vail together," John notes. "And in Vail, they were roommates." He points out that they lived in "a small apartment, a one-bedroom. Jon and his girlfriend had one room and Sam had the pull-out couch in the dining room."

On February 5, John continues, the pair headed to the ski area and "took the Highline lift on the Blue Ox trail straight up to the top. They dropped in for their last run together around 2:30, 3, 3:30, and they'd had a couple of pops; they were drinking a little. Sam was a much better snowboarder than Jonathan, but they headed into the wooded part, skiing the trees" outside the resort's official boundary.

They don't appear to have gotten into trouble immediately; by accessing Sam's iCloud, John learned that at 5:16 p.m., "he made a transfer of money with his Wells Fargo account. So clearly, he was good. Nothing crazy was going on with him if he was on his phone, moving money around."

Somewhere along the line, though, Sam and Jonathan got separated, and at a couple of minutes past 7 p.m., Jonathan dialed 911 and reached dispatcher Collard, who oversees the Vail office; Wentworth reveals that Collard was named 2017's Supervisor of the Year by Colorado's chapter of the National Emergency Number Association/Association of Public-Safety Communications Officials.

Upon picking up, Collard said, "911: What is the address of the emergency?"

Sam Failla was working as a Vail ski instructor for his second season when he died.
Courtesy of John Failla
"Hi," Routh replied. "I am very lost off of the side of Vail Mountain right now."

"I am — I thought I was within the boundaries, but I missed...I fell off a catwalk and decided to come back in, but I'm pretty sure I'm out of bounds right now."

During the exchanges that followed, Routh speculated that he was in the vicinity of Two Elk Lodge, but he wasn't sure how close: "I'm sorry, I tried to turn left back onto the run and I kept going doing and I kept going...I've been hiking for a couple hours now."

Then came the key question from Collard: "Are you alone?"

"Yeah," Routh responded. "I was with a friend, but I haven't seen him for a couple hours now."

Rather than inquiring more about this friend, Collard focused on Routh, who told her, "I don't see any end in sight, and it's getting dark and I'm getting really nervous."


Routh also revealed that he had no food and water, hadn't stopped for lunch, wore gloves but lacked hand warmers, and was otherwise largely unprepared for a long night in the cold woods. She encouraged him to keep his phone's ringer on and said that if he hadn't heard from anyone in fifteen minutes, he should call back.

If Routh did so, the chronology of events makes no mention of it. "I guess they tried to find him and couldn't," John allows. "So Routh calls 911 again around three hours later, saying he'd heard sirens in the distance but hadn't seen anyone coming. And sometime between 11 and 11:30, three volunteers from the Vail rescue group found him and pulled him off the mountain."

Afterward, John says, "Dan Smith with the rescue group gave Routh water and warmed him up and then drove him to his car and sent him home to his apartment."

Given the size of the apartment and the fact that Sam slept on a sofa bed in a common area, it would presumably have been difficult for Routh not to notice his absence — and John subsequently learned that he sent a couple of texts inquiring into his whereabouts. But "he didn't call any of Sam's friends, and he didn't call us. I would have called the National Guard if I'd known. I would have rented a helicopter. But he just went to sleep."

Around 5 a.m., Routh sent another text to a mutual pal of his and Sam's that wasn't received until later. Several hours later, at 9:15 a.m. or so on the 6th, "he called 911 again," John reveals. "And as this was going on, Sam's iCloud account was being pinged by Vail because he was an employee and he didn't show up for work. It was, 'Where are you? Please click this link and we'll come and find you.' But there was nothing, nothing, nothing. And finally, at 11:30 in the morning, the ski patrol got together in Vail and went to where they found Routh. They followed snowboard tracks and found my son's dead, hypothermic body down near Mill Creek Road at the edge of the tree line."

A map of the area in which Sam Failla's body was found.
Google Maps courtesy of John Failla
By John's estimate, "it's about 2,400 feet from the tree line down to Mill Creek Road, where Sam was found. If he would have just continued down the stream — they found him curled up in a ball in the stream, and he'd taken his gloves off — he would only have been about a mile away from the ski lift at the bottom. It's heart-wrenching."

After Sam's death, Routh returned to New Jersey and attended his friend's wake and funeral, as well as joining Sam's sister and some other mutual friends at an area bar, John divulges. "He said to my daughter, 'I told them Sam was out there. They just didn't look for him.'"

John has been unable to quiz Routh further about that; Jonathan and his family "aren't talking to us anymore. But he couldn't have been in that bad of shape. They gave him water and he drove himself home. He wasn't even hospitalized. And nobody goes backcountry skiing alone. Why weren't the dispatcher and all these other guys peppering him with questions? Why wasn't Routh saying, 'I was with Sam Failla. Here's his cell phone number.'"

Somehow, that didn't happen, leaving John with dark thoughts. "My wife and I's greatest fear is that he fought his way through the night trying to survive, but he froze to death before anyone started looking for him. Come on, give the kid a chance."

Earlier this week, John participated in a conference call with Eagle County district attorney Bruce Brown and a slew of parties involved in the case. During that exchange, a representative of the Vail Ski Patrol said that its members had approached the area where Routh was thought to be on the 5th from an area not far from where Sam's body was located, and had they known to look for him, he feels confident he would have been found. But they didn't know anything about Sam being missing until the next morning.

Brown acknowledged oversights by Collard in terms of inquiring about the friend briefly cited by Routh in the first 911 call, John says, and he suggested that Smith's questioning could have been more vigorous. Still, the DA says he will not file criminal charges in either instance.

After Sam's death, "the outpouring of love has been amazing," John acknowledges. "Vail loved him. Over 1,350 people went to the wake and the funeral. People flew in from all over, and we got all these cards from kids, who were drawing pictures of Sam on the mountain. Which is great, and as a parent, I have to hang on to that. But this was a 24-year-old kid — my only son."

In recent days, John says, "we've been talking to some attorneys, because we want to know what our rights are within the law. But it's not about money for my wife and I. It's about accountability. If someone's accountable, I think they need to step up and take the blame. Because this was a great, well-rounded kid loved by so many people. He loved his job, he loved the people of Vail. He was going to look for a job in Denver, because he wanted to stay in Colorado. So it's just disappointing what went down, and how ill-prepared they seem to have been."

Click to view the Sam Failla event chronology related to the rescue of Jonathan Routh.